Autophagy is a ubiquitous process that enables cells to degrade and recycle proteins and organelles. We apply advanced fluorescence microscopy to visualize and quantify the small, but essential, physical changes associated with the induction of autophagy, including the formation and distribution of autophagosomes and lysosomes, and their fusion into autolysosomes.

Prostate cancer is the leading form of malignancies among men in the U.S. While surgery carries a significant risk of impotence and incontinence, traditional chemotherapeutic approaches have been largely unsuccessful. Hormone therapy is effective at early stage, but often fails with the eventual development of hormone-refractory tumors. We have been interested in developing therapeutics targeting specific metabolic deficiency of tumor cells. We recently showed that prostate tumor cells specifically lack an enzyme (argininosuccinate synthase, or ASS) involved in the synthesis of the amino acid arginine1. This condition causes the tumor cells to become dependent on exogenous arginine, and they undergo metabolic stress when free arginine is depleted by arginine deiminase (ADI)1,10. Indeed, we have shown that human prostate cancer cells CWR22Rv1 are effectively killed by ADI with caspase-independent apoptosis and aggressive autophagy (or macroautophagy)1,2,3. Autophagy is an evolutionarily-conserved process that allows cells to metabolize unwanted proteins by lysosomal breakdown during nutritional starvation4,5. Although the essential components of this pathway are well-characterized6,7,8,9, many aspects of the molecular mechanism are still unclear - in particular, what is the role of autophagy in the death-response of prostate cancer cells after ADI treatment? In order to address this question, we required an experimental method to measure the level and extent of autophagic response in cells - and since there are no known molecular markers that can accurately track this process, we chose to develop an imaging-based approach, using quantitative 3D fluorescence microscopy11,12.

Using CWR22Rv1 cells specifically-labeled with fluorescent probes for autophagosomes and lysosomes, we show that 3D image stacks acquired with either widefield deconvolution microscopy (and later, with super-resolution, structured-illumination microscopy) can clearly capture the early stages of autophagy induction. With commercially available digital image analysis applications, we can readily obtain statistical information about autophagosome and lysosome number, size, distribution, and degree of colocalization from any imaged cell. This information allows us to precisely track the progress of autophagy in living cells and enables our continued investigation into the role of autophagy in cancer chemotherapy.

The protocol in this section assumes the use of the DeltaVision Personal DV deconvolution microscope and associated SoftWorX application suite (Applied Precision, Inc., WA).

The protocol in this section applies to the use of the OMX Structured Illumination Microscope (Applied Precision, WA).

The image sequence shown in Figure 1 shows the physical changes that occur in CWR22 cells during the first 80 min of autophagy induction. In this and other studies (not shown) we consistently observed: (1) displacement of the nucleus away from the cell center; (2) reduction of focal adhesion points; and (3) general translocation of autophagosomes and lysosomes towards the center of the cell. In addition, we also observed a small increase in colocalization (indicated in yellow) between autophagosomes (green) and lysosomes (red), at later time points.

As a demonstration of image-based cytometry, we used the VoloCITY digital imaging application suite (version 6.0, Improvision/Perkin-Elmer) to identify, count, and collect statistical data on labeled autophagosomes and lysosomes in the images of the CWR22 cells shown in Figure 1. As shown by the charts in Figure 2, the number and size of the autophagosome (after their initial formation and appearance) do vary with time: after 80 min of autophagy induction, there was a gradual but net decrease in the number of autophagosomes (Figure 2A) with a corresponding increase in the average size of the autophagosomes (Figure 2B). In addition, there was a measureable increase in the colocalization of autophagosomes and lysosomes, based on Pearson's Correlation Coefficient analysis (Figure 2C). Together, these findings suggested that upon stimulation of autophagy, numerous small autophagosomes fuse to form larger autophagosomes over time (Figure 2D). While Figures 1 and 2 reflected the results of only a single imaging study, and more rigorous quantitative analysis will be needed to draw a firm conclusion, it did illustrate the features and advantages of quantitative fluorescence microscopy. We are actively using this technique in our continuing investigation of the molecular mechanism and process of cellular autophagy.

Figure 3A shows a side-by-side comparison of images acquired and reconstructed in DV mode (simulated widefield deconvolution, left) vs. structured-illumination mode using the OMX microscope (right). Lateral resolution was improved to up to 120 nm, twice the resolution of conventional diffraction-limited microscopy14,15. Small-scale colocalization of autophagosomes and lysosomes (Figure 3B, indicated by arrows) were clearly apparent with super-resolution microscopy, whereas they were hardly evident with conventional fluorescence imaging.

One of the advantages of using Deconvolution Microscopy is to reconstruct all images into a 3D model that will reveal more accurate spatial information between different molecules. Movie 1 shows an overall picture of a CWR22Rv1 cell undergoing autophagy at later time point, where significant amount of colocalization between autophagosome and lysosome begin to occur. The E-Cadherin staining (as indicated in white color) reveals the outline of the target cell. In Movie 2, the 3D reconstructed model provides more spatial details of the fusion between autophagosomes and lysosomes (as indicated in yellow color). We can clearly see the interaction between green LC3 signals and red Lysosome signals, and the merge of the two signals to produce yellow signals. 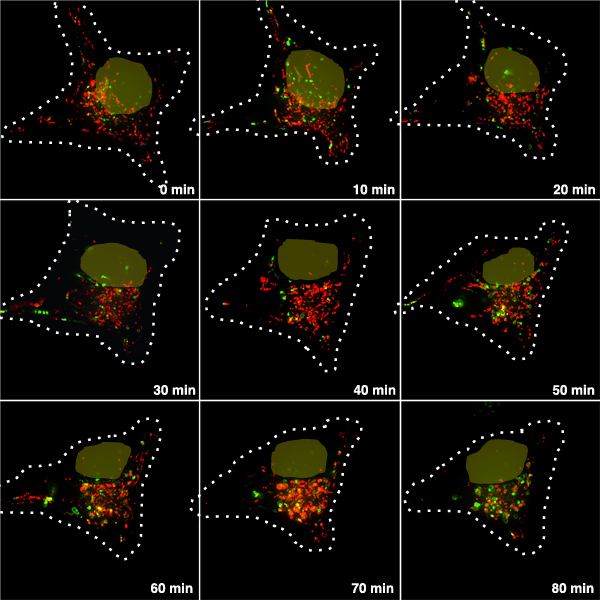 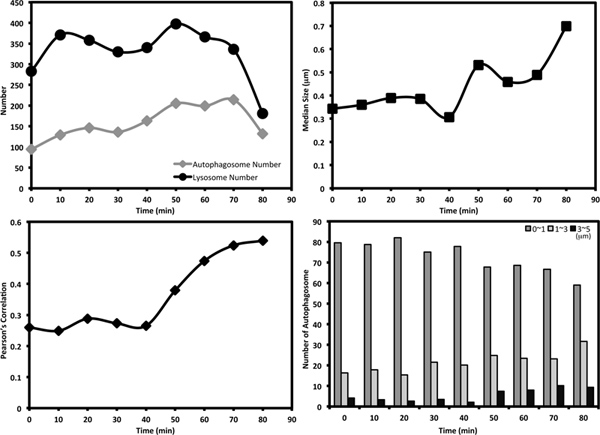 Figure 2. Statistical Analysis. Statistical trends were extracted by analyzing the image sequence shown in Figure 1 as a demonstration that the image data is quantifiable. Click here to view larger figure. 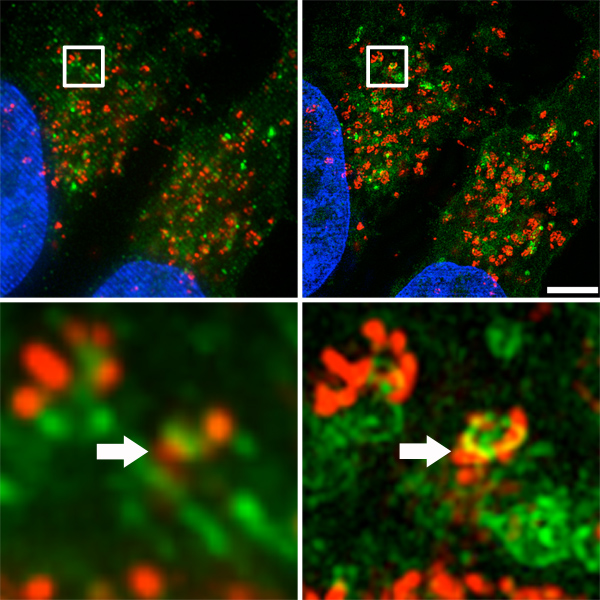 While the direct observation of cells labeled with fluorescent probes against LC3 is widely accepted as a standard method to confirm autophagic response6, quantitative 3D imaging of the same system (as we have done) provides unprecedented information and detail about the complex process of cellular autophagy. In particular, we observe that hundreds (if not thousands) of autophagosomes in live cells are formed within 80 min of autophagy induction. Similarly, we observe very interesting morphological changes in the distribution of lysosomal compartments during autophagy induction. Within a given cell, the decrease in autophagosome number and the corresponding increase in their average size over time, suggest that autophagosomes grow larger by fusing with each other, before combining with lysosomes to form autolysosomes. High-resolution 3D fluorescence imaging of live cells enables us to investigate whether autophagosomes must reach a critical size before fusing with lysosomes, or whether autophagy may proceed simply at a smaller physical size. Indeed, given the number of very small autophagosomes that appear upon early activation just at the resolution limit of the deconvolution microscope, and much more clearly resolved on the OMX structured-illumination microscope13, it may be the case that the bulk of autophagic activity actually occurs at this level.

The ability to monitor live cells during the course of autophagy is critically important, as the changes in the number and size of autophagosomes in a given cell can be small, relative to the variations of these parameters from cell to cell. By studying a single, living cell over time - we can be more certain that the morphological changes that we observe are due to experimental conditions, rather than statistical variance.

Finally, with specific molecular markers, we can apply these imaging techniques to study the early formation of autophagosomes, to trace the origin for the autophagosomal membranes, and to identify possible organelles and/or intracellular components that have been specifically engulfed in autophagosomes during autophagy induction. We also hope that this approach will enable us to investigate role of autophagy in cell-survival and cell death, and better characterize the effects of potential drugs and inhibitors on autophagy. 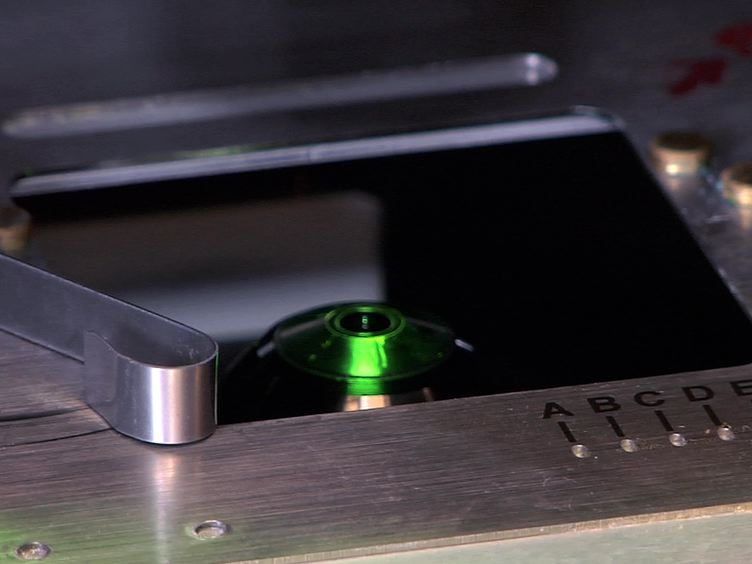