Attentional deficits are common in a variety of neuropsychiatric disorders including attention deficit-hyperactivity disorder, autism, bipolar mood disorder, and schizophrenia. There has been increasing interest in the neurodevelopmental components of these attentional deficits; neurodevelopmental meaning that while the deficits become clinically prominent in childhood or adulthood, the deficits are the results of problems in brain development that begin in infancy or even prenatally. Despite this interest, there are few methods for assessing attention very early in infancy. This report focuses on one method, infant auditory P50 sensory gating.

Attention has several components. One of the earliest components of attention, termed sensory gating, allows the brain to tune out repetitive, noninformative sensory information. Auditory P50 sensory gating refers to one task designed to measure sensory gating using changes in EEG. When identical auditory stimuli are presented 500 ms apart, the evoked response (change in the EEG associated with the processing of the click) to the second stimulus is generally reduced relative to the response to the first stimulus (i.e. the response is "gated"). When response to the second stimulus is not reduced, this is considered a poor sensory gating, is reflective of impaired cerebral inhibition, and is correlated with attentional deficits.

Because the auditory P50 sensory gating task is passive, it is of potential utility in the study of young infants and may provide a window into the developmental time course of attentional deficits in a variety of neuropsychiatric disorders. The goal of this presentation is to describe the methodology for assessing infant auditory P50 sensory gating, a methodology adapted from those used in studies of adult populations.

Many neuropsychiatric illnesses- including attention deficit-hyperactivity disorder (ADHD), bipolar mood disorder, and schizophrenia- are considered neurodevelopmental disorders, meaning that the onset of symptoms is at least partially due to very early aberrations in brain development. The early brain developmental aberrations may be silent or only associated with nonspecific symptoms for years or even decades prior to onset of the full disorder. This model suggests that a full understanding of the disorder may require methods to measure very subtle changes in brain function very early in brain development.

P50 sensory gating reflects an early step in the attentional process1,2. P50 sensory gating refers to a specific task, an auditory evoked potential task, which correlates with behavioral and neurocognitive tests of attention and reflects cerebral inhibitory mechanisms3,4. In this task, subjects are presented with two identical broad spectrum auditory stimuli ("clicks") while an EEG response is recorded. An auditory stimulus elicits a consistent EEG-measured brain response; the response includes a wave which, in adults, occurs approximately 50 msec after the stimulus. Since the wave is in the positive direction, this wave is described as the P50 wave. Most individuals demonstrate a significantly reduced response to the second stimulus of a pair relative to the first, reflective of the brain's ability to automatically inhibit response to irrelevant repetitive information (to "gate" sensory information). Many psychiatric illnesses with attentional symptoms-including attention deficit-hyperactivity disorder (ADHD), bipolar mood disorder, and schizophrenia-are associated with impairment in sensory gating5-7.

P50 sensory gating ratios should generally range from 0 to slightly greater than 1.0. Values above 2 generally only occur in the case of P50 amplitudes below 1.0 μV, may represent poor signal to noise ratio and should either be discarded or truncated to a value of 2.0 11. Mean values from infants drawn from the general population should average about 0.4 13. Figure 1 provides two sample tracings: one from an infant with typical sensory gating; one from an infant with poor sensory gating.

P50 sensory gating ratios can be utilized as a continuous measure. However, the creation of a ratio introduces additional variability. An alternative is to dichotomize results into “normal” versus “impaired” P50 sensory gating. In adults, ratios < 0.40 are considered normal and >0.50 are considered impaired14. Ratios between 0.40-0.50 are considered indeterminate and can either be added to either group or excluded from further analysis. Appropriate cutoff points for infants have not been firmly established; however, preliminary work suggests similar cutoff points as used in adults are appropriate15. 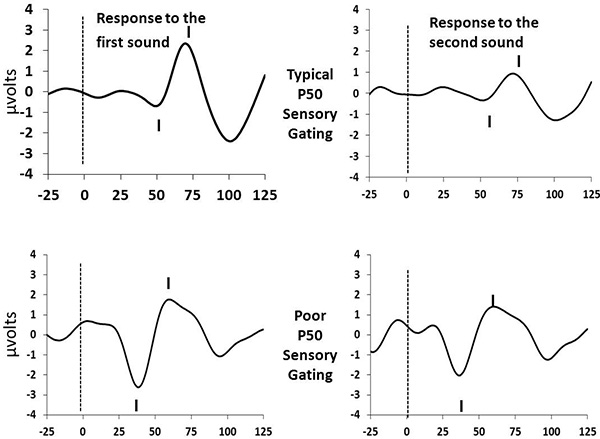 P50 sensory gating is thought to reflect a complex interaction of inhibitory neurocircuits located primarily in the hippocampus, dorsolateral prefrontal cortex, and thalamus16. Thus, alterations in P50 sensory gating in infants may suggest altered development in these regions of the brain.

In these brain regions, GABAergic interneuron inhibition of glutaminergic pyramidal cells likely accounts for the gating process, with the inhibition provided by GABAergic cells. The GABAergic interneurons are themselves modulated by adrenergic and cholinergic input. The adrenergic input is intermittent and inhibits the interneurons which decreases their ability to inhibit pyramidal cells and thus blocks sensory gating. One of the difficulties in recording awake infants is that even very mild stressors, such as applying electrodes, can increase adrenergic tone an interfere with the ability to measure functional gating abilities.

In contrast to the impact of intermittent adrenergic input, cholinergic stimulation of interneurons is tonic and results in enhanced interneuron firing, thus improving sensory gating17. Factors which decrease cholinergic input, such as genetic phenotypes related to decreased cholinergic receptor expression, lead to chronic problems in sensory gating18. Similarly, decreased neuronal release of choline, as occurs during non-REM sleep, also decreases interneuron activity and sensory gating. Nicotine is an interesting compound as acute use stimulates nicotinic cholinergic receptors and improves sensory gating19,20, while repeated or chronic nicotine use has no effect when used alone but blocks the effects of other agonists21, presumably because chronic stimulation leads to receptor desensitization22. Infants who are exposed to prenatally exposed to nicotine through maternal cigarette use have impaired P50 sensory gating12.

This awareness of the fundamental biology of sensory gating was the rationale for a randomized trial of supplementation during pregnancy with the dietary component choline, an agonist at the cholinergic receptor on interneurons. Supplementation occurred in from early in the second trimester through approximately 3 months post birth. Infants who had received choline supplementation had accelerated development of sensory gating15.

The adaptation of auditory P50 sensory gating paradigm for infant study allows exploration of questions related to when during development cerebral inhibition develops and when that development goes awry for individuals vulnerable to later attention-associated neuropsychiatric illnesses. Similar efforts with other physiological tasks, such as mismatch negativity, eye tracking, and prepulse inhibition may offer other windows into early development. It is hoped that the adaptation of tasks for use in early infancy may increase understanding of the developmental time course of these disorders as well as suggest novel primary prevention strategies17.

Drs. Ross and Hunter receive salary support from NIH-funded grants. All other authors have no conflicts to disclose.

This work was funded, at least in part, by the National Institutes of Health (NIH grant numbers MH086383, MH056539 and MH015442) and by the Institute for Children’s Mental Disorders. 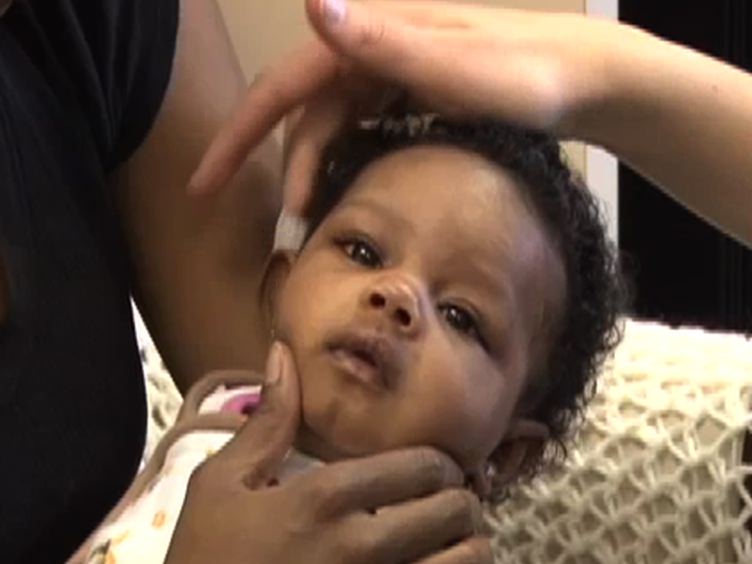