Here we describe a growth assay for Staphylococcus aureus using hemoglobin as the sole source of available nutrient iron. This assay establishes the role of bacterial factors involved in hemoglobin-derived iron acquisition.

S. aureus is a pathogenic bacterium that requires iron to carry out vital metabolic functions and cause disease. The most abundant reservoir of iron inside the human host is heme, which is the cofactor of hemoglobin. To acquire iron from hemoglobin, S. aureus utilizes an elaborate system known as the iron-regulated surface determinant (Isd) system1. Components of the Isd system first bind host hemoglobin, then extract and import heme, and finally liberate iron from heme in the bacterial cytoplasm2,3. This pathway has been dissected through numerous in vitro studies4-9. Further, the contribution of the Isd system to infection has been repeatedly demonstrated in mouse models8,10-14. Establishing the contribution of the Isd system to hemoglobin-derived iron acquisition and growth has proven to be more challenging. Growth assays using hemoglobin as a sole iron source are complicated by the instability of commercially available hemoglobin, contaminating free iron in the growth medium, and toxicity associated with iron chelators. Here we present a method that overcomes these limitations. High quality hemoglobin is prepared from fresh blood and is stored in liquid nitrogen. Purified hemoglobin is supplemented into iron-deplete medium mimicking the iron-poor environment encountered by pathogens inside the vertebrate host. By starving S. aureus of free iron and supplementing with a minimally manipulated form of hemoglobin we induce growth in a manner that is entirely dependent on the ability to bind hemoglobin, extract heme, pass heme through the bacterial cell envelope and degrade heme in the cytoplasm. This assay will be useful for researchers seeking to elucidate the mechanisms of hemoglobin-/heme-derived iron acquisition in S. aureus and possibly other bacterial pathogens.

1. Purification of Hemoglobin from Fresh Blood

We have purified human hemoglobin from hemolysate with HPLC (Protocol step 1.7). Figure 1 shows recorded absorbance of eluate at 280 and 410 nm wavelengths. Fraction 5 was collected and other fractions were discarded. Yields of five to fifteen milligrams of hemoglobin per milliliter of eluate are typically acquired. Purified hemoglobin was analyzed by SDS-PAGE in duplicate and the gels were either stained for proteins or transferred onto nitrocellulose and immunoblotted (Protocol step 1.10, Figure 2).

We have assessed the ability of purified human hemoglobin to support the growth of wild type S. aureus and S. aureus that lacks the IsdB component of the Isd system (ΔisdB). IsdB is a hemoglobin receptor that is required for hemoglobin-derived iron acquisition12. Wild type and ΔisdB were grown in iron-depleted medium supplemented with human hemoglobin (NRPMI + EDDHA + Hb) as described in section 3 of the protocol. When grown in NRPMI + EDDHA + Hb, wild type but not ΔisdB is able to proliferate as indicated by an increase in optical density of the cultures over time (Figure 3A). In contrast, the ability to utilize supplemented free iron (+FeCl3) is identical in wild type and ΔisdB (Figure 3B). Neither wild type nor ΔisdB proliferate in the absence of an iron source (Figure 3B). 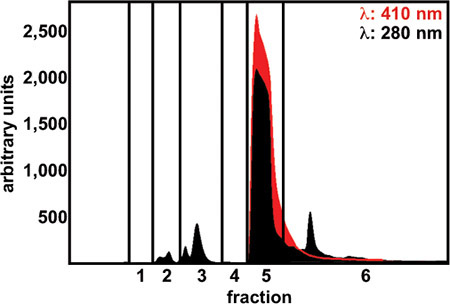 Figure 1. Absorption of the elution fractions during hemoglobin purification. Absorption at 410 nm (specific to heme-binding proteins) and 280 nm (characteristic for all proteins) was monitored throughout the elution. Fraction number five contained hemoglobin and was collected. 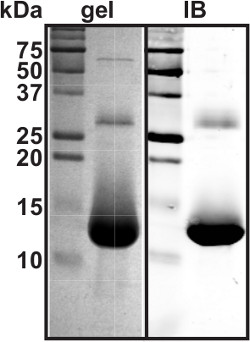 Figure 2. Purified human hemoglobin Twenty micrograms of purified hemoglobin was separated using denaturing 15% SDS-PAGE. A. Gel stained for proteins with Bio-Rad protein assay dye reagent. B. Nitrocellulose membrane immunoblotted for hemoglobin. The intense lower band is a hemoglobin monomer, while the more faint upper bands are hemoglobin dimers and tertramers, which did not get completely denatured. 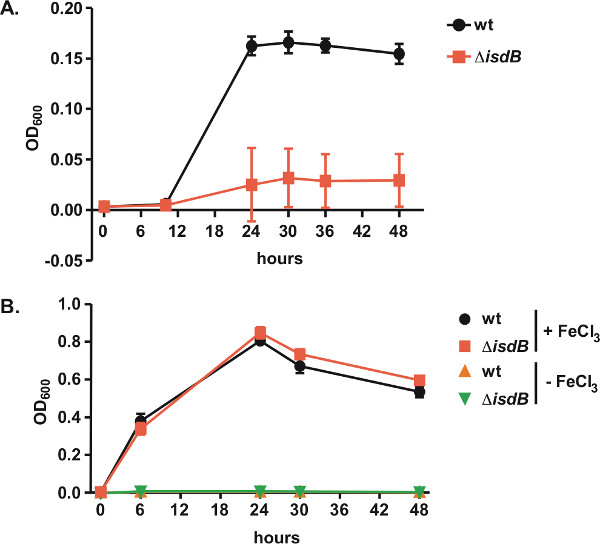 Figure 3. Use of human hemoglobin as an iron source by S. aureus A. Growth of wild type (wt) or isogenic hemoglobin receptor isdB mutant (ΔisdB) in NRPMI supplemented with iron chelator EDDHA and human hemoglobin is statistically different as determined by Student's two-tailed t test, p < 0.05. B. Growth in NRPMI supplemented with 10 μM iron chloride (+FeCl3) or EDDHA (-FeCl3) is not different between wt and ΔisdB. Graphs depict data from a representative experiment, which included three biological replicates. Error bars denote standard deviation of optical density readings at indicated time points between the replicates. 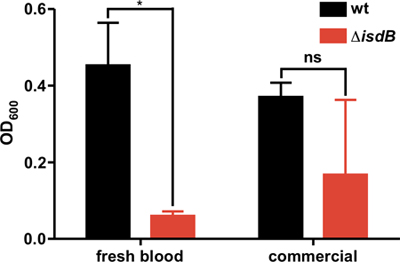 Iron is an essential nutrient required by organisms from all kingdoms of life15. In vertebrates, iron is sequestered to avoid toxicity caused by this element. This sequestration also conceals iron from invading microbes in a process known as nutritional immunity16. In response, pathogens have evolved strategies that circumvent nutritional immunity. One such mechanism relies on hemoglobin, which is the most abundant source of iron within the host17. Hemoglobin is contained within red blood cells. Hemoglobin released from damaged red blood cells is bound by host haptoglobin, which signals rapid removal of haptoglobin-hemoglobin complexes by macrophages18. In order to gain access to hemoglobin, S. aureus expresses hemolysins that lyse red blood cells19. Haptoglobin-induced hemoglobin removal is countered by high affinity binding of hemoglobin by the cell surface receptors expressed by S. aureus. S. aureus extracts heme from the peptide component of hemoglobin and imports heme into the cytoplasm by passing it from cell wall proteins to membrane proteins. In the cytoplasm, heme is degraded by oxygenases to release free iron or is utilized intact in the electron transport chain20.

Numerous studies have demonstrated the contribution of the Isd system to infection8,10-14. Further, biochemical studies have assigned the functions of its individual components in hemoglobin-derived iron acquisition4-9. Here we describe an assay that monitors the growth of S. aureus with hemoglobin as the only source of available iron. In this regard, we need to point out certain conditions that are pivotal for the success of the experiment.

The quality and type of reagents utilized in hemoglobin-derived iron acquisition growth assays can dramatically influence the results obtained in these assays. In contrast to hemoglobin obtained from fresh blood, hemoglobin that is stored in lyophilized form allows bacterial growth independent of the components of the Isd system (Figure 4)21. This is likely due to the changes in the structure of hemoglobin that are induced by lyophylization. Specifically, lyophilized hemoglobin contains tetramers, dimers, and monomers of hemoglobin, as well as heme in its free form22. Purification of hemoglobin from fresh blood and its preservation in liquid nitrogen ensure integrity of the protein22. Extensive research on hemoglobin has facilitated the development of protocols for the purification of high-quality hemoglobin from fresh blood or in recombinant form, which can be used in our assay23-25.

The choice of iron chelator may affect the growth assay. For example, 2,2-dipyridyl, which is frequently used as an iron chelator, is toxic to bacterial cells26. These two effects make it hard to discern if the inhibition of bacterial growth by 2,2-dipyridyl is due to iron chelation or toxicity. Additionally, 2,2-dipyridyl is likely to be membrane permeable, and thus penetrates the bacterial cell and chelates iron intracellularly27. We have found that growth inhibition by EDDHA is reversed by supplementation of an iron source, making EDDHA a more suitable iron chelator for bacterial growth assays. However, the concentration of EDDHA that needs to be added to the growth medium may vary. This is due to variation of both EDDHA potency and growth medium iron content from batch to batch. The iron chelating activity can be normalized between batches of EDDHA by chemically removing residual iron28. However, due to variation between batches of RPMI, we found that the final EDDHA concentration may still need to be adjusted to allow growth in the presence of an iron source. We found that the highest concentration of EDDHA that is permissive for growth of wild type S. aureus in the presence of hemoglobin is optimal for this experiment.

Modifications can be made to the current protocol to more closely resemble the environment encountered by bacteria during infection. For example, within the host, heme that is released from hemoglobin is quickly bound by hemopexin. Hemopexin cannot be used as an iron source by S. aureus, therefore its addition would prevent acquisition of heme released from hemoglobin during incubation with S. aureus12.

We feel that this assay may be used for research into metal acquisition by a variety of bacterial pathogens. Furthermore, this method may be used to measure iron acquisition from non-hemoglobin sources of iron that are present within the host.

This research was supported by U.S. Public Health Service grants AI69233 and AI073843 from the National Institute of Allergy and Infectious Diseases. E.P.S. is a Burroughs Wellcome Fellow in the Pathogenesis of Infectious Diseases. K.P.H. was funded by the Cellular and Molecular Microbiology Training grant Program 5 T32 A107611-10. 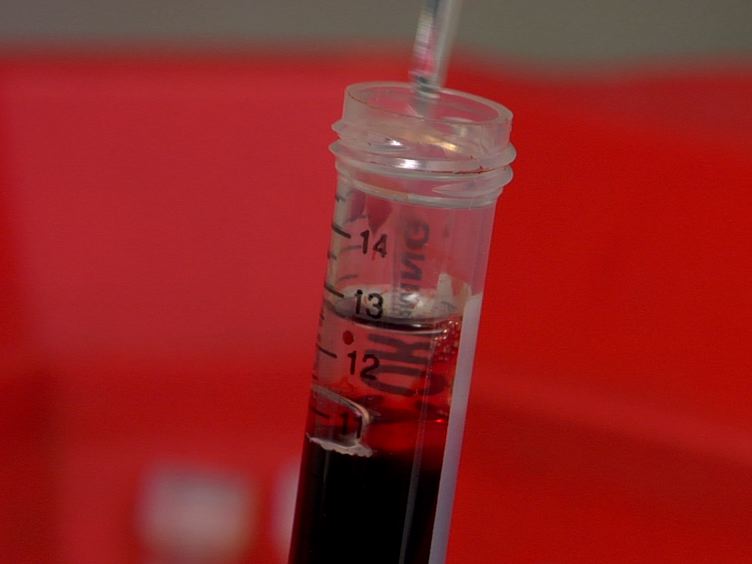