We present a protocol for freezing and cryosectioning yeast communities to observe internal patterns of fluorescent cells. The method relies on methanol-fixing and OCT-embedding to preserve the spatial distribution of cells without inactivating fluorescent proteins within a community.

Microbes typically live in communities. The spatial organization of cells within a community is believed to impact the survival and function of the community1. Optical sectioning techniques, including confocal and two-photon microscopy, have proven useful for observing spatial organization of bacterial and archaeal communities2,3. A combination of confocal imaging and physical sectioning of yeast colonies has revealed internal organization of cells4. However, direct optical sectioning using confocal or two-photon microscopy has been only able to reach a few cell layers deep into yeast colonies. This limitation is likely because of strong scattering of light from yeast cells4.

Here, we present a method based on fixing and cryosectioning to obtain spatial distribution of fluorescent cells within Saccharomyces cerevisiae communities. We use methanol as the fixative agent to preserve the spatial distribution of cells. Fixed communities are infiltrated with OCT compound, frozen, and cryosectioned in a cryostat. Fluorescence imaging of the sections reveals the internal organization of fluorescent cells within the community.

Examples of yeast communities consisting of strains expressing red and green fluorescent proteins demonstrate the potentials of the cryosectioning method to reveal the spatial distribution of fluorescent cells as well as that of gene expression within yeast colonies2,3. Even though our focus has been on Saccharomyces cerevisiae communities, the same method can potentially be applied to examine other microbial communities.

Fluorescence images of vertical cross-sections of yeast communities containing red- and green-tagged competitive populations6 are shown in Figure 3. These communities consist of two prototrophic strains of yeast and their competition for shared resources, including space, leads to columnar patterns7, as displayed in their vertical cross-sections. Resolutions down to a single cell can be resolved in cross-sections. Figure 3 compares cross-sections of replicate communities obtained with (bottom) and without (top) methanol-fixing, following the protocols in Figure 1. For cryosectioning yeast communities without fixing, the protocol is followed starting from step 1.8. The fluorescence signal is preserved in community sections without fixing, but the integrity of the community is compromised. As a result: (1) some cells float away around the edge of the section, and (2) the overall yield (i.e., fraction of sections not perturbed by artifacts of the sectioning procedure) is lower compared to fixed communities.

Figure 4 shows representative bright-field and fluorescence vertical cross-sections of a yeast community. Cells on top of the community form a crown that appears distinct from other cells characterized by stronger scattering in bright-field and brighter fluorescence. These patterns are consistent with reported patterns of differentiation in yeast colonies4. 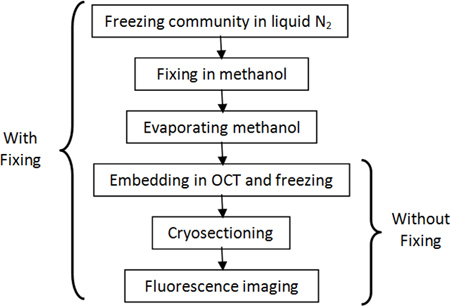 Figure 1. Flowchart of the typical procedure for cryosectioning yeast communities with (left) and without (right) fixing. 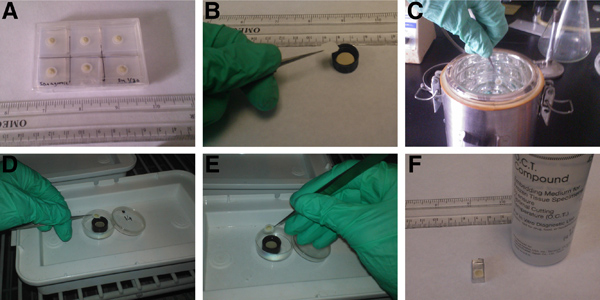 Figure 2. Steps involved in the fixing and freezing of yeast communities are illustrated. (A) Yeast communities are grown on top of 6 mm-diameter disks of MF membrane filter. (B) A piece of Whatman 541 filter paper is put in a well containing methanol to be used as the carrier. (C) Communities are frozen by dipping them in liquid nitrogen for typically ~15 sec. (D) Frozen communities are transferred to -20 °C well of methanol on top of carrier Whatman filter. (E) After fixing, the carrier Whatman filter is used to take communities out of methanol and transfer them to a cold dish for evaporation. (F) The community after evaporation is transferred to a rectangular cubic aluminum-foil container and covered with OCT for final freezing of the block.

Figure 3. Representative fluorescence images of vertical cross-section of replicate yeast communities grown under identical conditions are shown without (top) and with (bottom) methanol-fixing. The community consists of two prototrophic strains of S. cerevisiae tagged with mCherry and yEGFP fluorescent proteins7. Without fixing, cells are not bound together and may float away or rearrange during sectioning. Methanol-fixing keeps community cells together, but causes shrinkage as observed in the difference between community heights (% average).

The procedure presented here offers a way to inspect the internal structure of yeast communities. The methanol fixing step makes the yeast colony rigid8 and preserves the integrity of the colony; however, it also causes shrinkage8 that should be taken into account in interpreting the results. We typically see around 30% shrinkage in height of yeast colonies, compared to colonies directly embedded in OCT without fixing9.

To avoid shrinkage, an alternative approach for cryosectioning is to directly embed the communities in OCT and freeze them. Fluorescence is preserved in the method based on direct embedding, but the drawback is that the cells within each section are not bound together. As a result, some of the cells at the edges of the section float away, and the sections are more likely to suffer disturbances in the sectioning process (Figure 4). Although not focused on here, bright-field images of cross-sections of yeast communities may also give us useful information about the state of cells within the community9. Whether or not the property of interest is affected by the fixing step has to be examined on a case-by-case basis.

We would like to thank Jonathan Cooper Lab at Fred Hutchinson Cancer Research Center for the permission to use their cryostat. This work was supported by NIH and the W.M. Keck Foundation. BM is a Gordon and Betty Moore fellow of Life Science Research Foundation. We are grateful to Daniel Gottschling for sharing his fixing protocol with us. 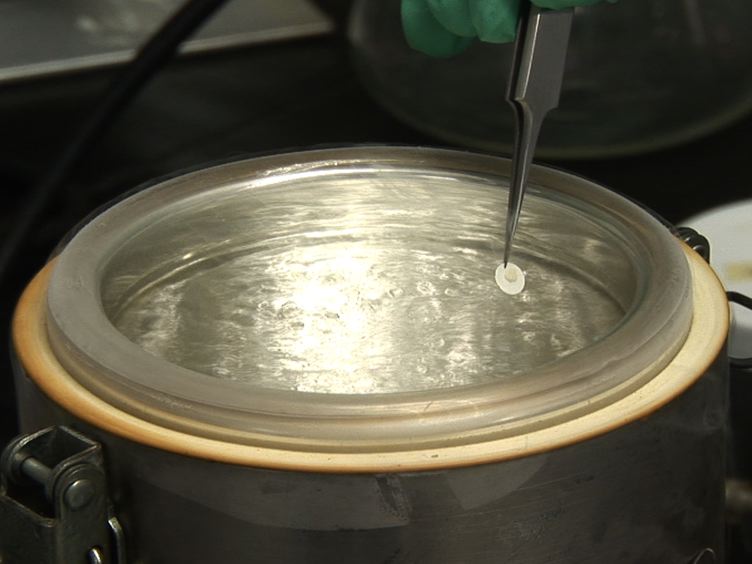