The cytoskeleton, a network of biopolymers found in most eukaryotic cells, plays a role in cellular organization, intracellular transport, and cell mechanics. The mechanical characteristics of the biopolymers of the cytoskeleton (primarily actin and microtubules) play a significant role in determining the mechanical characteristics of the cell as a whole12. Since whole cell mechanics can characterize healthy and diseased cells13,14 and is involved in cellular motility15, the mechanical properties of the underlying cytoskeletal components have been an active area of study for the past two decades1.

The flexibility (or stiffness) of biopolymers is characterized by the persistence length, the length of polymer which bends by approximately one radian under thermal fluctuations at ambient temperature. A number of techniques have been developed to measure persistence length16, for example active techniques which involve bending the polymer using hydrodynamic flow, optical traps, or electric fields4,17,18 , and passive techniques which measure the fluctuations of free polymers in solution5,6 . The active measurements, however, require specialized setups to implement known forces on the micrometer scale, and the free-fluctuation measurements can be challenging due to diffusion out of the plane of focus of the microscope used.

In this article, we describe a complementary, passive, technique to measure the persistence length of microtubules, a cytoskeletal polymer. The technique involves gliding assays, which ensure that the polymer always remains in the focal plane19. Moreover, it involves tracking single fluorophores attached permanently to the polymer of interest, so that specific locations along the polymer are well characterized.

The gliding assay itself uses kinesin biotinylated at the coiled-coil21 specifically bound to the glass slide via a streptavidin-biotin linkage. This attachment ensures that the motor domains are free to bind to and propel microtubules. In order to follow microtubule trajectories, microtubules are sparsely labeled with organic fluorophores22,23 - the labels must be sparse enough that single fluorophores are resolvable using single molecule fluorescence microscopy. Single fluorophores are tracked using image analysis routines written in IDL. The trajectories of each fluorophore bound to a given microtubule are combined into a composite microtubule trajectory automatically24. The tangent angles θ to each point along a trajectory are calculated; from these tangent angles the <cosθs> value is calculated for each contour length s. Finally, these data are fit to Eq. 1 in order to extract a persistence length for a given microtubule, or for many microtubules in the same gliding assay.

Prepare ahead of gliding assay.

Prepare the solutions in 2.1-2.6 on the day of the experiment. With practice, solutions 2.2-2.6 can be prepared during flow-cell washing. Unless otherwise noted, keep stock solutions on ice.

An IDL routine, get_lp.pro, is attached. This routine returns a persistence length value based on all microtubules gliding in a given image sequence. Either run this routine on each image sequence, modifying intensity parameters depending on your particular microscope setup, or do the following:

The tangent angle data from many microtubule trajectories is combined to calculate a single persistence length for all microtubules in a given experiment. Figure 5 shows a plot of <cosθs> versus contour length s for the gliding assay of Figure 2. At large contour length values, very few values of cosθ are measured; hence the average is highly variable. The weighted fit conforms to the short s, high-precision data more closely than the long s, low-precision data.

If microtubules are freely diffusing in solution but not binding to surface, increase the kinesin concentration in step 3.7 and use AMP-PNP instead of ATP to ensure kinesin binds microtubules irreversibly. If microtubules still do not bind, make new streptavidin stock and buffer, followed by new biotin-BSA buffer. Finally, purify new biotinylated kinesin.

If microtubules bind but do not move, replace ATP stock solution with fresh ATP.

If fluorophores are too dim, increase illumination intensity. 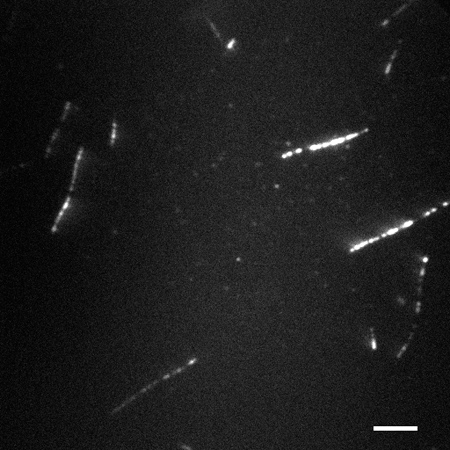 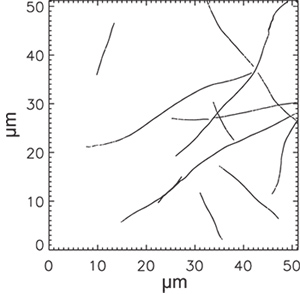 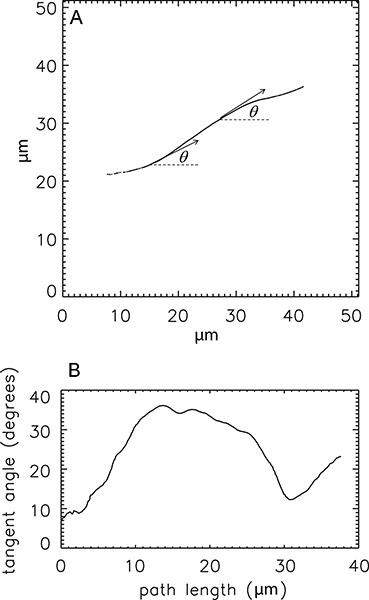 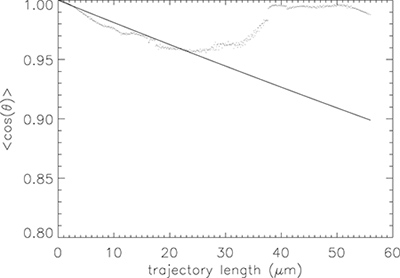 Figure 5. Calculating persistence length from tangent angles. (dots) Plot of <cosθs>versus contour length s for the 11 trajectories shown in Figure 3. (solid line) Fit to Eq. 1. For this group of microtubules, the persistence length is 500 ± 40 μm. For long contour lengths (above 10 μm or so), the data are highly variable due to limited statistics.

Persistence length measurements are a good characterization of the mechanical properties of individual biopolymers. In this article, we have described a method of measuring the persistence length of microtubules. As noted in the introduction, this method is readily extended to examining microtubule mechanical properties in a variety of conditions simply by varying the reagents, temperature, or viscosity in the final step of the gliding assay, 3.9, or by polymerizing microtubules, step 1.1, under different conditions.

The technique itself is quick to perform. Once stock solutions have been prepared ahead of time (step 1), a gliding assay experiment can be performed in 2-3 hr, including up to four variations in conditions on a single microscope slide (the four lanes in step 3.1). Many microtubules can be examined in each experiment; typical experiments in our lab examine 100 microtubules per condition (about 10 image sequences per lane, with 10 microtubules per sequence). The analysis of large data sets is likewise fairly quick. With practice, 10 image sequences can be analyzed for persistence length in an afternoon or so with a modern PC. The rate-limiting step in the analysis is the time to track individual fluorophores; newer tracking methods promise to increase this speed substantially27.

Because the method involves tracking single fluorophores attached to a given microtubule, the precision of tracking is only limited by photon collection, and can be on the scale of nanometers22,25 . By including data from many fluorophores, the precision is further improved. Potentially, even higher precision could be reached by attaching very bright fluorescent objects, such as quantum dots, to the microtubule.

A second limitation to this method is the requirement that biotinylated kinesin-1 be used for specific attachment of kinesin to microscope slides. Biotinylated kinesin must be purified (from E. Coli in our case), and cannot simply be purchased off the shelf. However, a modified gliding assay using unbiotinylated kinesin may be used28; kinesin heavy chain protein which might be suitable for this technique is commercially available from Cytoskeleton (KR01). Modifying the gliding assay to use this alternate kinesin would not affect microtubule flexural rigidity in any way, and would thus enable groups without access to recombinant kinesin protein to use this method.

We thank Melissa Klocke for assistance preparing Figure 1 and Anna Ratliff for demonstrating the protocol. This work was supported by the Research Corporation for Science Advancement. 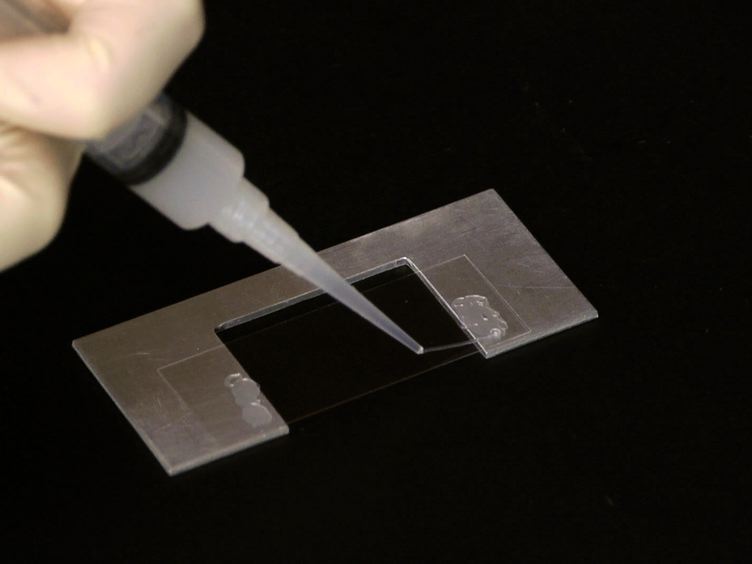