Visualization of experimental data has become a key element in presenting results to the scientific community. Generation of live time-lapse recording of growing embryos contributes to better presentation and understanding of complex developmental processes. This protocol is a step-by-step guide to cell labeling via photoconversion of kaede protein in zebrafish.

Vertebrate palatogenesis is a highly choreographed and complex developmental process, which involves migration of cranial neural crest (CNC) cells, convergence and extension of facial prominences, and maturation of the craniofacial skeleton. To study the contribution of the cranial neural crest to specific regions of the zebrafish palate a sox10: kaede transgenic zebrafish line was generated. Sox10 provides lineage restriction of the kaede reporter protein to the neural crest, thereby making the cell labeling a more precise process than traditional dye or reporter mRNA injection. Kaede is a photo-convertible protein that turns from green to red after photo activation and makes it possible to follow cells precisely. The sox10: kaede transgenic line was used to perform lineage analysis to delineate CNC cell populations that give rise to maxillary versus mandibular elements and illustrate homology of facial prominences to amniotes. This protocol describes the steps to generate a live time-lapse video of a sox10: kaede zebrafish embryo. Development of the ethmoid plate will serve as a practical example. This protocol can be applied to making a time-lapse confocal recording of any kaede or similar photoconvertible reporter protein in transgenic zebrafish. Furthermore, it can be used to capture not only normal, but also abnormal development of craniofacial structures in the zebrafish mutants.

Orofacial clefts represent the most prevalent craniofacial deformity, with 1/700-1,000 deliveries affected 1. Disruption of early embryological craniofacial development can lead to formation of cleft lip and palate (CL/P). While causes for syndromic cleft have been largely shown, the genetic and epigenetic bases of nonsyndromic forms of orofacial clefting still need to be uncovered 2-4. In order to understand the etiology and pathogenesis of these malformations, it is necessary to elucidate the development of craniofacial structures on a cellular basis.

In all vertebrate species cranial neural crest cells (CNCC) migrate from the dorsal neural tube to populate the pharyngeal arches, which will contribute to formation of orofacial structures. Disruption of early embryological neural crest development can lead to formation of craniofacial malformations including CL/P 5-7.

In addition to structural similarities between zebrafish and mammalian craniofacial development (CNCCs reside in homologous regions), the gene regulatory network is highly conserved. It has also been shown that CNCCs develop in the same fashion between amniote species and zebrafish 8, making the zebrafish a powerful organism for the study of developmental and genetic basis of CL/P. It has many advantages, including small size, rapid and ex-utero embryonic development, and high breeding rates. Moreover, the embryo is optically transparent, making it amenable to observation of complex developmental events under the microscope 9. It is an ideal animal model for the study of migration and differentiation of cranial neural crest cells.

Expanding on previously published work 8, 10, 11, the migratory pattern of CNCC was described in detail using the sox10: kaede transgenic model 5. Kaede is a photo- convertible protein that turns from green to red after photo activation and makes it possible to trace CNCCs precisely. During this transformation the peptide backbone is cleaved, suggesting that the conversion is stable, meaning the cells can be tracked to their final destination 12. Transgenic lines labeled with kaede under transcriptional control of sox10 showed that the amniote palate and the ethmoid plate of zebrafish are formed homologously by fusion of bilateral maxillary prominences (MXP) with the frontonasal prominence (FNP) and that the Y shaped fusion seam is analogous between species.

Among other applications, the sox10: kaede transgenic zebrafish model was used to generate videos of zebrafish embryos at different developmental stages to show formation of normal and abnormal craniofacial structures. Photoconversion of specific groups of cells makes it possible to track their development. With this method an approach to create live imaging of developing craniofacial structures in zebrafish is introduced, making it easy to visually demonstrate this complex developmental process.

This protocol is aimed at sharing the experience of generating these videos using the normal development of the ethmoid plate in sox10: kaede transgenic zebrafish as an example. This protocol can further be applied to making time-lapse videos of any structure derived from cranial neural crest cells in zebrafish.

2. Mounting of Embryo for Photoconversion

3. Preparation and Mounting of Embryo

Among other applications, this animal model was used to better visualize the development of CNCC dependent craniofacial structures. Normal development of specific structures and also pathologic development of craniofacial malformations, especially cleft lip and palate have been captured. A series of live time-lapse videos of zebrafish at different developmental time points has been generated.

A specc1lb morpholino knockdown zebrafish embryo was chosen as a representative example. SPECC1L is the first gene implicated in development of the rare but severe oblique facial cleft. Morpholino-based knockdown of SPECC1L homolog specc1lb in zebrafish results in bilateral facial clefting in the ethmoid plate. Embryos at 60 hpf embryos that had been injected with specc1lb antisense morpholino were selected and the most anterior portion of ethmoid plate cells was photoconverted unilaterally. In contrast to normal development of the ethmoid plate, failure of fusion between median ethmoid plate cells and lateral ethmoid plate cells could be observed. This resembles pathogenesis of ObFC development in humans, where failure of fusion between the lateral nasal process and maxillary prominence occurs (see Video 2). 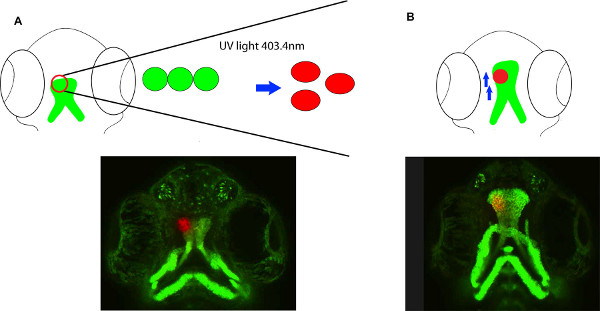 Figure 1. sox10: kaede photoconversion. A. Ventral view of 60 hpf sox10: kaede transgenic zebrafish. The structure labeled green in the diagram and the corresponding real live image resembles the ethmoid plate. After exposure to UV light (at 403.4 nm) under the confocal microscope, the fluorescent protein kaede is photoconverted from green to red. B. The photoconverted cells can be followed as shown in Panel B.

Here a new method for visualization of craniofacial development in the zebrafish model is shown. The sox10: kaede transgenic zebrafish line has been successfully used to describe the migratory pattern of CNCC in detail is used as a model organism 5.

Previous studies have used gross landmarks such as the eye to target cells and have relied on kaede mRNA injection, photoconversion assays or caged fluorescein dextran for photoconversion 10, 11, 14, 15 .The sox:10 kaede transgenic line has many advantages compared to these methods. With neural crest cells already labeled with kaede and conforming to a very particular distribution, more precise landmarks for establishing regions for fate mapping may be used. In addition, having kaede protein expressed endogenously under the control of the sox10 promoter ensures that only neural crest cells are photoconverted and that only derivates will be labeled at a later stage, decreasing the potential background 5.

With this technique, the formation of any neural crest cell derived craniofacial structure in zebrafish can be shown successfully. The development of normal wild type zebrafish embryos can be followed and this wild type reference can be compared to embryos where normal gene expression has been perturbed.

Potential modifications include using a different container to fix the embryo during visualization . This can be a Petri dish, or any other translucent tray.

If imaging is not successful, this is likely due to mistakes in software settings. Read the users manual of the microscope carefully before starting live time lapse.

While imaging, it is critical to focus on the right plane of the embryo and to set Z-stack borders precisely. Further, image quality parameters such as frames/sec, average and LUTs have to be set in the best way possible in order to get high quality results.

A potential limitation of this technique is, that it is technically challenging to label cells on a single cell basis, as surrounding tissue is also exposed to UV light. Further, if cell proliferation is rapid, the red labeling is lost through dilution after cell division.

In addition, kaede is tetrameric and has a tendency to form aggregates when fused to other proteins. This limits its use in most fusion applications in live cell imaging.

Live time-lapse imaging is an important tool to make complex developmental experimental data more accessible to the scientific community and a broader audience. 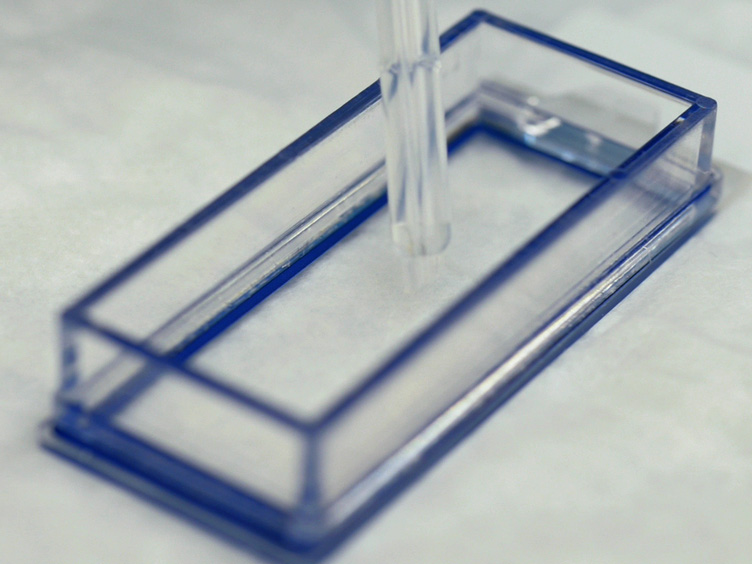