This protocol describes how to dissect premigratory cranial neural crest (NC) from Xenopus laevis neurulas. These explants can be plated on fibronectin and cultured in vitro, or grafted back into host embryos. This technique allows studying the mechanisms of NC epithelium-to-mesenchyme transition, migration, and differentiation.

The neural crest (NC) is a transient dorsal neural tube cell population that undergoes an epithelium-to-mesenchyme transition (EMT) at the end of neurulation, migrates extensively towards various organs, and differentiates into many types of derivatives (neurons, glia, cartilage and bone, pigmented and endocrine cells). In this protocol, we describe how to dissect the premigratory cranial NC from Xenopus laevis embryos, in order to study NC development in vivo and in vitro. The frog model offers many advantages to study early development; abundant batches are available, embryos develop rapidly, in vivo gain and loss of function strategies allow manipulation of gene expression prior to NC dissection in donor and/or host embryos. The NC explants can be plated on fibronectin and used for in vitro studies. They can be cultured for several days in a serum-free defined medium. We also describe how to graft NC explants back into host embryos for studying NC migration and differentiation in vivo.

The neural crest (NC) is a transient embryonic cell population that emerges from the neural tube at the end of neurulation in vertebrate embryos. The signaling and genetic events that control NC specification start as early as gastrulation. The NC is specified at the border between the neural and non-neural ectoderm by signals from surrounding dorsal tissues. At the end of neurulation, NC cells undergo an epithelium-to-mesenchyme transition (EMT) and migrate extensively in the embryo following stereotyped routes by responding to surrounding guiding cues. Once they have reached their final destination, they differentiate into a vast array of derivatives, e.g. neurons, glia, bone, cartilage, and pigmented cells1-5. Because of their contribution to many cell types and embryonic tissues, defects at any step of NC cells development, from induction to final differentiation, can cause congenital syndromes named neurocristopathies6. Experimental manipulation of the developing NC at different stages - specification, EMT, migration, and differentiation - will improve our understanding of neurocristopathies and allow design of potential therapeutic strategies.

The Xenopus laevis embryo is a model of choice to study NC development. Large numbers of embryos are easy to obtain, and external fertilization gives access to the very first steps of development. Many tools are available to experimentally manipulate X. laevis embryonic development. Gene gain-of-function and knockdown are easy to perform by microinjecting individual cells of early blastulas. Embryonic tissues can be cut for in vitro reassociation 7-11 or back-grafting assays12,13.

In this protocol, we describe how to dissect out premigratory cranial NC in X. laevis late neurulas, prior to migration. These explants can be cultured on fibronectin-coated plates to study migration and differentiation in controlled in vitro experimental conditions. NC explants can also be grafted into normal or manipulated host embryos to study their migration and differentiation in vivo.

Experiments comply with National and European regulation on the protection of animals used for scientific purposes and with internationally established principles of replacement, reduction and refinement.

2. Dissection of the NC Explants

When plated on fibronectin, the neural crest explants attach rapidly (15-30 min) and the explant spreads flat within 2 hr (Figure 1A). After 3-6 hr cells start to scatter. At 24 hr at 15 °C, many cells have started to migrate away from the explant (Figures 1B and 1C). Yolk makes cells very bright under phase contrast (Figure 1B). Cell protrusions (filopodes and lamellipodes) are clearly visible after phalloidin staining of the actin cytoskeleton (Figure 1C).

For the orthotopic grafting experiment, the donor embryos were injected with GFP mRNA in order to follow the grafted cells in the unlabeled host embryo. The cranial NC was ablated on one side of the host; 30-60 min after surgery the graft has healed, replacing the ablated host cranial NC (Figure 1D, 2 hr after grafting). A few hours later, the GFP-positive cells have migrated out from the explant and followed the stereotyped migration routes of NC cells towards ventral craniofacial locations (Figure 1E). In tadpoles, NC-derived craniofacial structures have developed (Figure 1G). When cranial NC was ablated, these structures were missing, resulting in a shortened face with eye adjacent to the cement gland (Figure 1H, red arrows). In grafted tadpoles, the donor NC cells have contributed to the cranio-facial structures, resulting in a normal face morphology (Figures 1F and 1I, green arrows). 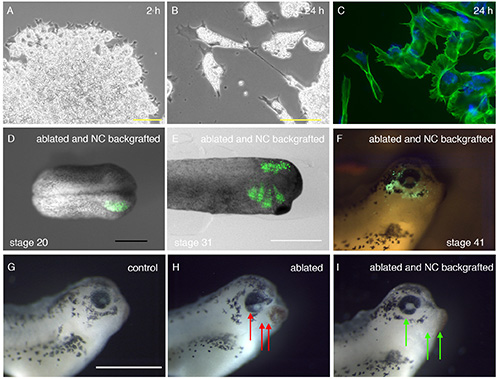 Figure 1. In vitro and in vivo behavior of explanted cranial NC. A-C) Premigratory NC was dissected out from a stage 17 neurula embryo and plated onto a fibronectin-coated dish. A) 2 hr after plating, the explant has attached and spread. B) 24 hr after plating, cells have efficiently migrated on the fibronectin. C) Lamellipodia and filopodia are clearly seen in migrating NC cells labeled with phalloidin (green). D-I) Neurula stage 17 GFP+ labelled premigratory NC was taken from a GFP-injected embryo and back-grafted into a host embryo, from which cranial NC was ablated at stage 17-18. D) Two hours after grafting, the explant has healed. E-F) Grafted NC cells have actively migrated out and populated the mandibular stream as shown at tadpole stage 31 and 41. G) Control stage 41 tadpole. H) Ablating the NC has resulted in a dramatic failure of face and eye development (H: note that the cement gland develops adjacent to the eye, due to the lack of NC cells populating the jaw areas, red arrows. Compare to control tadpole in G). F, I) In contrast, the grafted NC cells have restored eye and craniofacial structures development (F, I, green arrows). A-C, Scale bars = 100 mm; D-I, Scale bar = 1 mm. D, dorsal view. E-I, side views. This figure has been modified from Milet et al.12 Please click here to view a larger version of this figure.

This protocol describes an easy technique to explant premigratory cranial NC in X. laevis embryos. The embryos used for such experiments need to be robust and heal well. Discard any batch of unhealthy embryos. In addition, grow embryos at various temperatures (from 12 to 18-20 °C), in order to excise neural crest at stage 17 and not later. After stage 17, neural crest may be mixed with cephalic mesoderm and cannot be removed completely. Xenopus tissues heal quickly and then loose their adhesion to other tissues. It is important to work rapidly and place the neural crest explants into the host as soon as it is excised from the donor.

Concerning in vitro experiments, fibronectin culture dishes can get contaminated with bacteria or fungi after a couple of days. Use antibiotic and clean or sterile material and solutions as often as possible.

This procedure is optimized for cranial neural crest. Indeed, this cell population is well defined and localized in stage 17 Xenopus embryos. Unfortunately, this model is not appropriate to perform such experiments on trunk NC. Bird embryos are more suitable for those who are interested in manipulating such trunk NC cell population.

The explants described in this protocol can be used to study various aspects of NC behavior, both in vivo and in vitro. The NC molecular developmental program is largely conserved in vertebrates19. Frog development is a powerful model to study vertebrate NC EMT, migration and differentiation. X. laevis embryonic cells contain enough yolk to allow their survival in vitro for several days without addition of any external nutrient. Thus, in vitro studies can test the effects of various growth factors or chemical compounds, in a simple and fully controlled culture medium. Such experiments have been designed to analyze EMT and migration, including studying the effects of chemo-attractants or chemo-repellents, of activating or blocking signaling pathways, etc.14,20-24 This approach can also be used to design improved directed NC differentiation protocols. In the context of developing protocols for regenerative medicine, obtaining diverse NC-derived cell types in vitro could be used in drug screening for understanding and treating neurocristopathies25,26.

NC development is orchestrated by a complex interplay between cell autonomous regulations and signals from the surrounding tissues. Experimental manipulations of gene expression, either in the donor NC or in the host embryo, allow discriminating cell autonomous from noncell autonomous aspects of NC development. Combining gain-of-function and knock-down approaches to this protocol for in vitro culture and in vivo grafting has been successfully used14,21,23,27-36.

This technique can be adapted to graft other tissues into host embryos and test for their migration and differentiation potentials. For example, we have used the pluripotent blastocoel roof ectoderm (the "animal cap") to look for a minimal transcriptional switch for NC development. We have studied the effect of two transcription factors, pax3 and zic1, on NC commitment and subsequent development. Animal caps with pax3 and zic1 gain-of-function were plated on fibronectin in vitro or backgrafted into host embryos. We found that Pax3/Zic1-induced cells migrate and differentiate like bona fide NC cells both in vitro and in host embryos12.

Numerous molecular mechanisms that govern NC EMT and migration are also involved in metastatic dissemination in cancer37. This protocol aims at providing a simple, cheap and efficient tool for developmental biologists and other researchers to explore the fundamental mechanisms of these key cell behaviors. 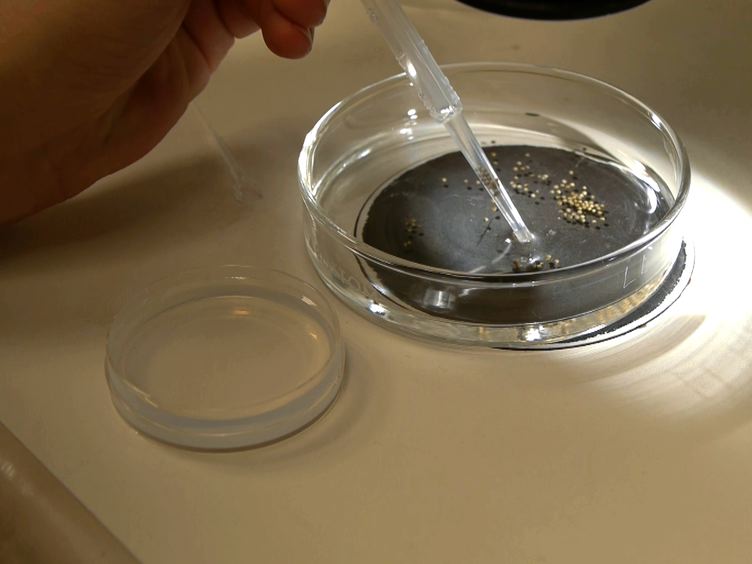