We have developed a mouse lung injury model by intra-tracheal injection of bacteria Pseudomonas aeruginosa. This model mimics lung injury during pneumonia and is clinically relevant.

In order to study human acute lung injury and pneumonia, it is important to develop animal models to mimic various pathological features of this disease. Here we have developed a mouse lung injury model by intra-tracheal injection of bacteria Pseudomonas aeruginosa (P. aeruginosa or PA). Using this model, we were able to show lung inflammation at the early phase of injury. In addition, alveolar epithelial barrier leakiness was observed by analyzing bronchoalveolar lavage (BAL); and alveolar cell death was observed by Tunel assay using tissue prepared from injured lungs. At a later phase following injury, we observed cell proliferation required for the repair process. The injury was resolved 7 days from the initiation of P. aeruginosa injection. This model mimics the sequential course of lung inflammation, injury and repair during pneumonia. This clinically relevant animal model is suitable for studying pathology, mechanism of repair, following acute lung injury, and also can be used to test potential therapeutic agents for this disease.

Lungs are exposed to environmental pathogens and are susceptible to inflammation and injury1-3. During pathological conditions such as pneumonia or Adult Respiratory Distress Syndrome (ARDS), pathogens as well as inflammatory factors released by leukocytes induce injury and death of alveolar cells1-3. It is important to develop animal models of acute lung injury to facilitate the study of pathology of injury as well as mechanism of repair.

Currently, most people use hyperoxia and bleomycin induced mouse lung injury models4. However, the mechanisms of hyperoxia caused injury are not the same as most common lung injuries that occur during pneumonia or ARDS5. Bleomycin induced acute injury is rare in a clinical context4. Here we report a mouse lung injury model using intra-tracheal injection of P. aeruginosa 6,7. This model is clinically relevant, and mimics the processes that happen following pneumonia8.

As an opportunistic, nosocomial pathogen of immunocompromised individuals, P. aeruginosa typically infects the pulmonary tract, urinary tract, burns, wounds, and also causes other blood infections6. The bacteria release virulence factor exotoxin A, multiply and trigger immune responses6. Intra-trachael administration of P. aeruginosa reflects the situation in human exposure to the bacteria which cause pneumonia and the pathology is likely to be different from the recently reported influenza virus H1N1 induced lung injury model9. Since P. aeruginosa is an opportunistic pathogen, it is relatively safe to handle as compared to some of the more virulent pathogens.  Here we used intra-tracheal injection to administer the bacteria because we observed that this method introduced more bacteria into the distal alveoli region of the lung compared with some other procedures such as using a catheter via mouth.

The animal experiments were approved by the Animal Care Committee and Institutional Biosafety Committees of the University of Illinois at Chicago.

NOTE: All procedures involving pseudomonas should be performed with Biosafety Level 2 (BSL2) practices, which include but are not limited to: mask, eye protection, gown or jumpsuit, and double gloves. Work in certified Biosafety Cabinet. Treat instruments in contact with bacteria with bleach or chlorine dioxide based disinfectant. Use a sealed box for transport samples.

Part of the data, including H and E staining, BrdU labeling, TUNEL assay, BAL analysis and MIP2 level measurement, were previously published7. In this article, we studied the role of FoxM1, a transcription factor, in the repair of alveolar injury using the P. aeruginosa lung injury model described here7. 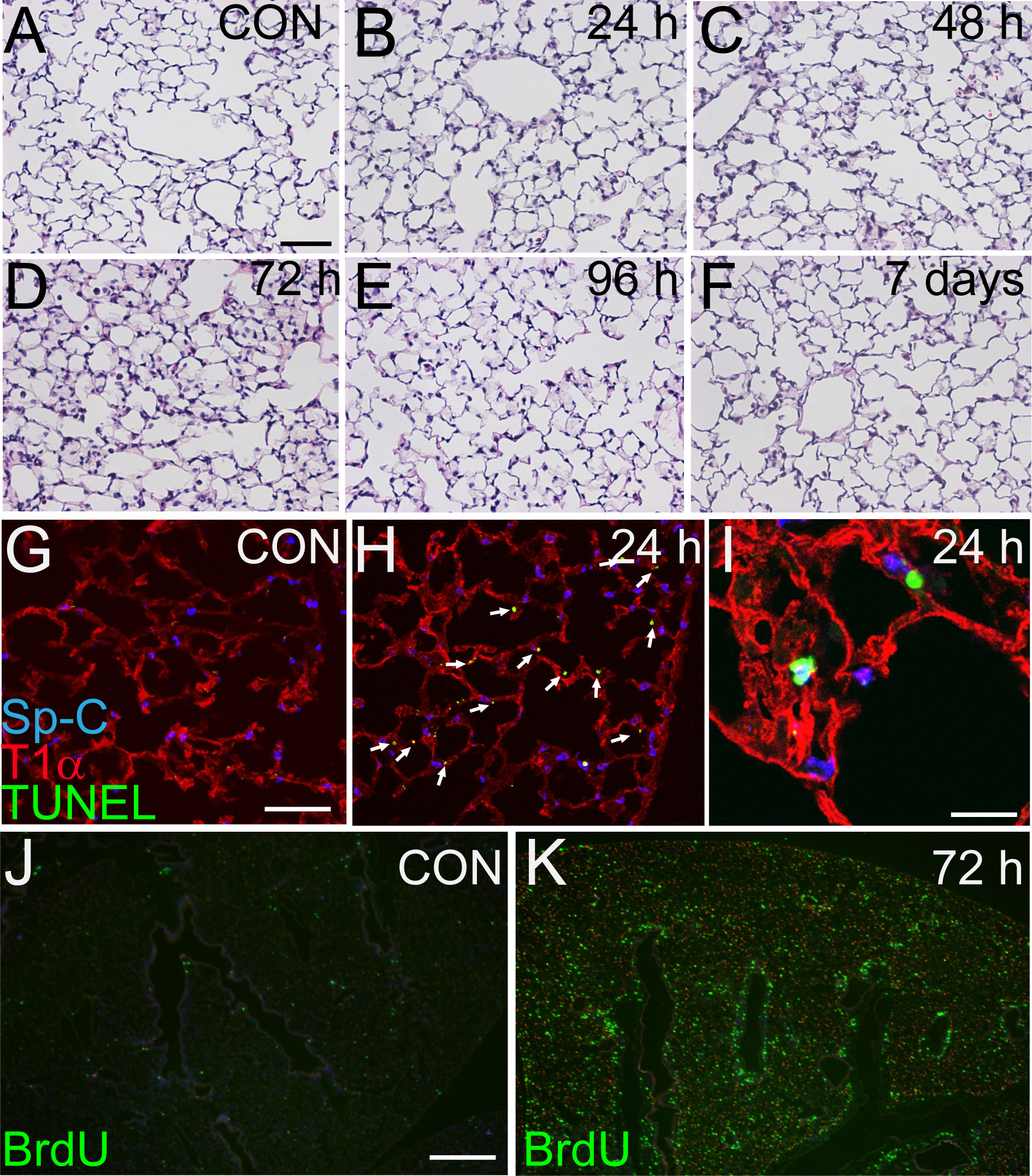 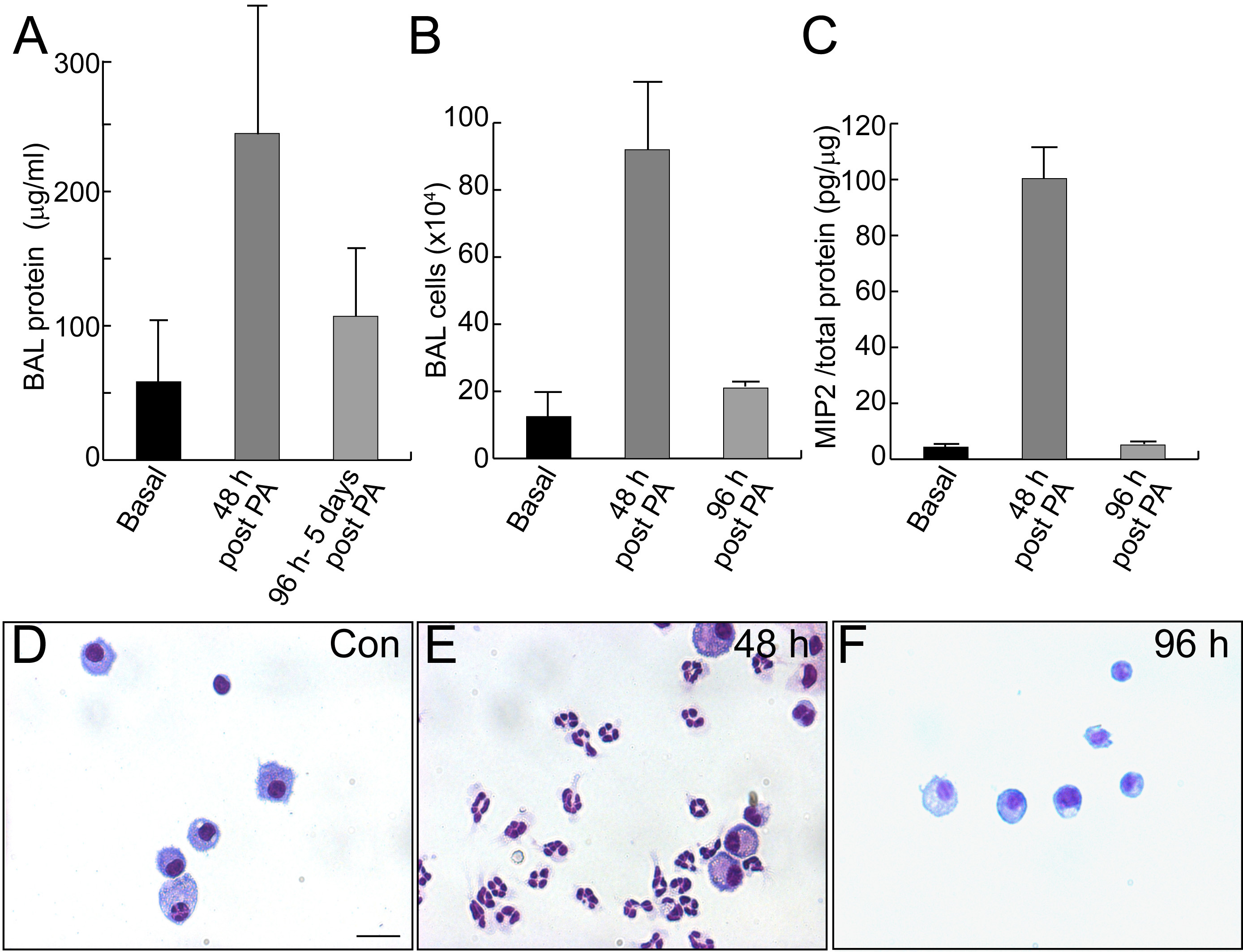 The Pseudomonas mouse lung injury model that we describe here mimics the whole process of inflammation, lung injury, repair, and resolution that occur following acute lung injury or pneumonia. It has unique advantages comparing with several other injury models in that it is clinically relevant and relatively safe and easy to handle.

The critical step in the procedure is that the injection of bacteria solution needs to be very slow. If injection is too fast, the mice are likely to die by choke. After a successful injection, the mice usually show several deep breathes and gasp, which will help the bacteria particles get into the lung.

The strain we used was PA1036. One of the critical points of this model is that the titer of P. aeruginosa needs to be tightly controlled. Batch of P. aeruginosa from different source could show different degrees of inflammation and damage even when used at the same CFU. Therefore, it is recommended that every new batch of bacteria be tested for their causative effects (such as inflammation, cell proliferation, etc.), and accordingly adjust the number of CFU to be used. If inconsistency of results occurs by using refrigerated bacteria stock, one can use fresh stock obtained by growing bacteria from a fresh plate for each experiment. In addition, the growth phase of the bacteria and choice of media can also have an impact on the effect on the host response. Therefore, care should be taken to ensure that bacterial inoculations occur during the same phase of the bacterial growth cycle.

There might be a difference in the response to P. aeruginosa by different strains of mice. The strain we used was a mixture of C57BL/6 and FVB/N. The appropriate P. aeruginosa titer should be determined for different mice strains.

One factor to consider for this model is that the damage of the bacteria is not limited to one cell type. For example, epithelial, endothelial, fibroblasts could all have been damaged. Therefore, this model is not suited for to study the effects of cell-type specific lung injuries. The bacteria cause lung cell death by stimulating inflammatory responses as well as by secreting toxins into tissue6. Live bacteria are usually cleared from the lung within 48 hr post injury7,14. A high concentration of dead bacteria can also cause damage by inducing inflammatory responses15.

The mechanisms of lung injury and repair are likely to be different in response to different types of lung injury. Therefore, it is important to compare several injury models. The P. aeruginosa model described here is a nice addition to the other models. 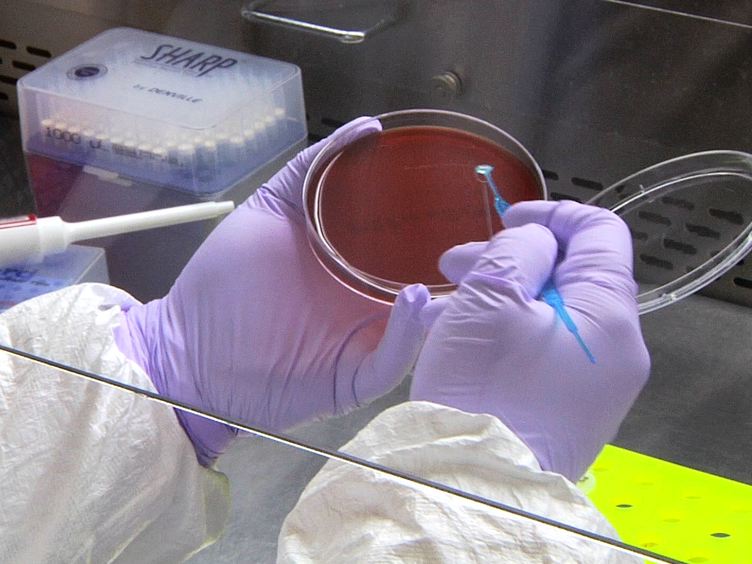