Stereotaxic (or stereotactic) surgery is a method used to manipulate the brain of living animals. This technique allows researchers to accurately target deep structures within the brain through the use of a stereotaxic atlas, which provides the 3D coordinates of each area with respect to anatomical landmarks on the skull. After the skull is exposed, anesthetized animals are mounted on a specialized instrument known as a stereotaxic frame, which enables the precise placement of experimental tools at the defined coordinates. Stereotaxic surgery is a versatile approach that can be used to generate lesions, manipulate gene expression, or deliver experimental agents to the brain.

This video-article provides a general overview of the principles behind stereotaxic surgery, including instructions for using a stereotaxic atlas and the stereotaxic frame, and an introduction to reading the Vernier scale for measurement of probe movements. The subsequent discussion outlines the steps required to perform the surgical procedure. Lastly, a broad range of technical applications are presented, such as the insertion of electrical probes to measure brain activity and genetic manipulation of brain tissue.

Stereotaxic surgery is a powerful technique utilized to manipulate the brain in living animals. Targeting regions deep within the intact brain poses a unique problem in that usually the surgical target cannot be located visually. Stereotaxy or stereotactic surgery was devised to target discrete regions of the brain by knowing their spatial relationships to visible landmarks. Using a three-dimensional coordinate system, tools can be directed to specific locations in order to measure brain activity, make a lesion, or perform genetic manipulations. This video will cover the principles of stereotaxic surgery, demonstrate essential steps of the procedure, and discuss various applications of the technique.

Before discussing the procedural details, let’s review the basic principles and tools of the technique. To start, stereotaxy depends on locating the targeted region of the brain on a three dimensional axis. For this purpose, a stereotactic atlas is used. This document is a 3D reconstruction of the brain obtained from serial sections of stained brains.

In this reference frame, spatial relationships are expressed using a set of 3 axes: Anterior-posterior, medial-lateral and dorsal-ventral. To determine the location of a region of interest, find the appropriate brain region in the atlas and use the grid to calculate the corresponding mediolateral and dorsoventral coordinates. The anteroposterior coordinate is obtained at the bottom or top of the page. This coordinate is measured from landmarks on the skull formed by the intersections of bone plates, which are known as sutures. The most prominent landmark, bregma, is defined as the point of intersection of the sagittal suture with the coronal suture. The point known as lambda is more posterior; where the sagittal suture intersects the lambdoid suture.

For accurate targeting to the calculated location during surgery, a device known as the stereotaxic frame is used . The frame consists of the main frame, the micromanipulator, and the probe holder, which is attached to the mounting clamp. Incisor and ear bars make contact with the animal in order to hold the head in a fixed position. The micromanipulator is used for precise movement of surgical probes to predetermined coordinates within the brain, and is equipped with sliding Vernier scales for exact distance measurements in all three dimensions.

To read a Vernier scale, first identify the location of the 0 line in relation to the tick marks on the right side of the scale. This side of the scale is labeled in 10 millimeter increments, so that 1 is 10 and 2 is 20. The location of the 0 mark here shows that the reading is in between 10 and 11 mm. To determine the first number to the right of the decimal point, find the line on the left scale that lines up best with a mark on the right side. Use the left scale to identify the value of this mark, which in this case is 9, making the final reading 10.9 mm.

You’re now familiar with the basic principles of stereotaxy, so let’s review how the surgical procedure is carried out. Before surgery, the scalp of an anesthetized animal is shaved and disinfected. To hold the animal in place on the stereotaxic frame, the ear bars are gently placed in the ears, and the front teeth are placed in the incisor bars. Eye ointment is applied to prevent corneal drying during surgery.

To expose the skull, make a small incision with a scalpel. Separate the muscle tissue gently and clean the surface of the skull. Then, use the micromanipulator to lower a probe to bregma and take note of its dorsoventral coordinate. Then raise the probe and repeat this procedure at lambda. If the lambda measurement is less than 0.1 mm from the dorsoventral coordinate at bregma, the skull is considered level and you are ready to proceed. If not, raise or lower the incisor bar and repeat the measurements.

Now that the brain is level, return to bregma and record the medio-lateral and antero-posterior coordinates. Based on the target coordinates from the brain atlas, calculate the movements required to reach that site and shift the probe to the target position. Mark this position on the skull and use a drill to carefully make a hole in the bone.

Just under the skull you will find the dura, a thick durable membrane that can be gently sectioned with the tip of a small needle.

Next, the micromanipulator arm is placed into position to lower the probe to the targeted dorsoventral coordinate, at which point the desired manipulation can be performed.

Now that you understand the basic steps of the procedure, let’s take a look at some of the many ways neuroscientists use stereotaxic surgery to answer questions in the lab.

To begin, stereotaxy is extremely useful for delivering experimental agents into precise brain regions. These agents may include tracer dyes used to visualize neuronal projections and connectivity, chemical compounds, or reagents for genetic manipulation of neurons. For instance, the injection of genetically engineered viruses will result in delivery of a gene of interest to infected cells. Here, a virus was injected into the hippocampus, resulting in GFP expression in a small population of neurons.

On the other hand, viral delivery of small interfering RNA can prevent the expression of desired proteins. In this example, expression of the protein SOD1 was suppressed in different brain regions following stereotaxic injection into the lateral ventricle.

Alternatively, stereotaxic surgery can be used to place electrodes in the brain for recording of the electrical signals that accompany neural activity. After the animal recovers from the surgical procedure, the electrodes can be connected to electrophysiological recording systems to observe neuronal firing while the mouse is freely behaving.

In addition to measuring neuronal activity, stereotaxic surgery is instrumental to microdialysis. This technique allows continuous monitoring of drug, neurotransmitter or metabolite concentrations in the brain tissue of awake animals. To do this, a small, fluid-filled probe with a semipermeable membrane at its tip is implanted into a specific brain region. Small solutes including neurotransmitters, hormones, and drugs diffuse into the probe, where they can be collected for analysis. In this experiment, glucose concentration in the hippocampus was measured as a readout for local neural activity while rats completed a task requiring the use of spatial working memory.

You’ve just watched JoVE’s video on stereotaxic surgery. In this video, we’ve covered the principles and methods of the procedure as well as its many applications in neuroscience labs. 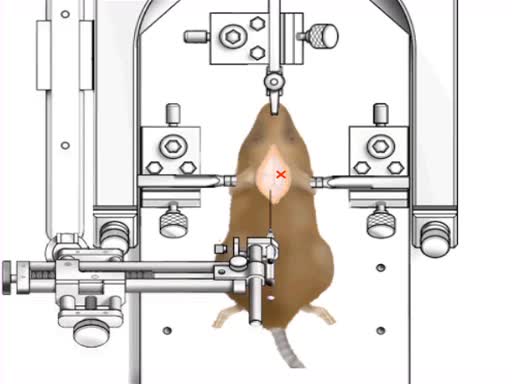