A protocol is described to extract primary human cells from surgical colon tumor and normal tissues. The isolated cells are then cultured on soft elastic substrates (polyacrylamide hydrogels) functionalized by an extracellular matrix protein, and embedded with fluorescent microbeads. Traction cytometry is performed to assess cellular contractile stresses.

In recent years it has become increasingly evident that mechanical micro-environment, in addition to bio-chemical factors, plays an important role in regulating cell functionalities. Cells can sense and respond to the substrate stiffness on which they are adhered to (as in 2D culture) or surrounded by (as in 3D culture) 3-7. By doing so, cells can modulate their differentiation3, morphology4, migration/motility5, bio-physical properties6, growth7, and other processes.

Cancer cells also respond to the 2D and 3D matrix stiffness using a coordinated, hierarchical mechano-chemical combination of adhesion receptors and associated signal transduction membrane proteins, the cytoskeletal architecture, and molecular motors1, 2. For example, mammary epithelial cells (MECs) form normal acinar parenchyma when cultured on 150 Pa substrates that is similar to the stiffness of healthy mammary tissue. Interestingly, they exhibit the hallmarks of a developing tumor, both structural and transcriptional, when cultured on stiffer substrates (> 5,000 Pa) that mimic the stiffness of a tumor stroma8. In addition, another experiment shows that breast tumorigenesis is accompanied by collagen crosslinking and ECM stiffening9. Recent experiments show that human colon carcinoma (HCT-8) cells display metastasis like phenotype (MLP) when they are cultured on 2D substrates having physiologically relevant stiffness (20–47 kPa), but not on very stiff (3.6 GPa) substrates10-12.These cells first form tumor-like cell clusters and then dissociate from one another, starting from the periphery. As this epithelial to rounded morphological (E to R transition) change occurs, they proliferate, reduce cell-cell and cell-ECM adhesion, and become migratory. HCT-8 cells cultured on very hard polystyrene substrates do not exhibit these malignant traits. Thus it has been hypothesized that HCT-8 cells become metastatic due to their exposure to appropriate micro-environment. It is worth noting that these experiments are carried out with immortalized cancer cell lines or murine derived primary cells, not with primary human cancer cells.

A recent study proposes that augmented cellular traction stress may be used as a potential biophysical signature for metastatic cells13.The study involves measuring traction force for different human cancer cell lines on polyacrylamide gels. It is found that metastatic cancer cells can exert significantly higher traction stress compared to non-metastatic cells in all cases13. However, these results directly contradict the earlier published findings on murine derived breast cancer cell lines14. Also, a recent study highlights remarkable differences between immortalized and primary human cells in their cytoskeletal remodeling protein profiling and cell survival protein expression15. Hence, it is important to revisit many of the biophysical assays including traction for primary human cancer cells. This will address the question whether the primary cells recapitulate immortalized cancer cell lines traction trend.

The protocol described here is optimized for isolation of primary human colon cells (both healthy and cancerous), and for culturing them on soft substrates (polyacrylamide hydrogels) as well as on Petri dishes. The protocol is based on digestion and consequent enzymatic dissociation of surgical tissue sample into single cell suspension16. To our knowledge, this is the first demonstration of culturing isolated primary colon tumor and normal cells directly on soft hydrogel substrates with embedded fluorescent microbeads for traction cytometry. Transparent gel substrates also allow immunostaining. This assay revealed differences in F-actin organization and focal adhesions in primary human colon cells as substrate stiffness changes. This cell culture platform opens up the possibility of exploring various biophysical properties of primary human cells such as cell stiffness and traction as parameters for cancer prognostics.

The protocol described below follows the guidelines of UIUC human research ethics committee.

Note: For visual demonstration of Section 3, the viewers/readers are referred to a recent Journal of Visualized Experiments (JoVE) article17.

The protocol described above is successfully employed for multiple tissue samples (n=12) from four different patients under guidelines of the institutional review board. Figure 1A illustrates a representative colorectal tumor right after surgery from which the tissue sections for cell cultures are obtained. A typical tissue section in HBSS solution after transfer to the laminar hood for further processing is shown in Figure 1B. A schematic of digestion and enzymatic dissociation of surgical tissue sample into single cell suspension is shown in Figure 2.

After successful tissue dissociation, isolated primary human cells are seeded on PA gels and polystyrene dishes. Phase contrast micrographs (Figure 3A and 3B) illustrate the representative morphology of primary human colon cancer and normal cells as a function of substrate rigidity. It is evident that primary colon cells (both healthy and cancerous) spread more on polystyrene dishes compared to the PA gels (Figure 3A and 3B).

Traction assays are performed on ECM (fibronectin) coated soft 2 kPa gels after confirmation of invasive adenocarcinoma from pathological H & E staining (Figure 4A). PA gels are uniformly coated with fibronectin as shown in Figure 4B. For ease of comparison, all traction experiments for tumor and healthy colon cells should be performed at the same time. Figure 4C shows a snapshot of the nanoscale fluorescent beads embedded inside the gel. From the displaced and reference bead images, the displacement fields are obtained using the ImageJ PIV plugin21, 22. A representative bead displacement field generated by invasive colon tumor cells on 2 kPa gel is displayed in Figure 4D. Figure 4E shows traction stress obtained using ImageJ FTTC plugin corresponding to displacement field in Figure 4D 21, 22.

Figure 1. (A) Tumor after colon resection. (B) Tissue sections from the tumor for cell isolation. Please click here to view a larger version of this figure. 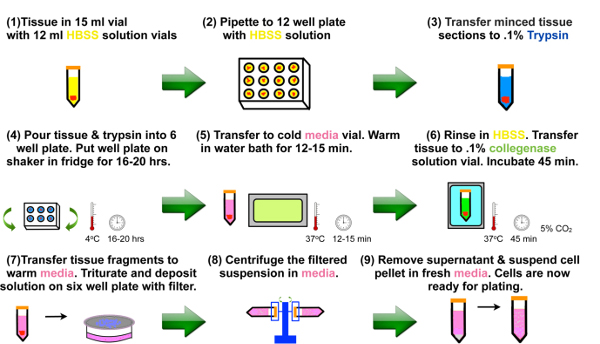 Figure 2. Schematic of digestion and enzymatic dissociation of surgical tissue sample into single cell suspension. Please click here to view a larger version of this figure. 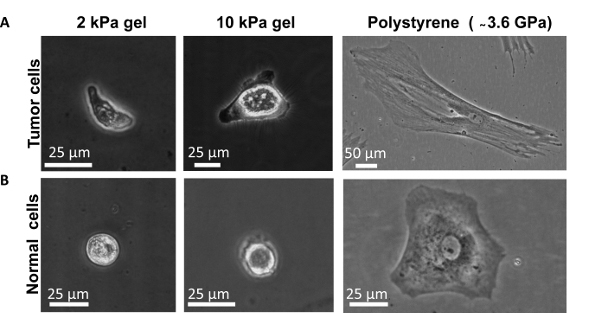 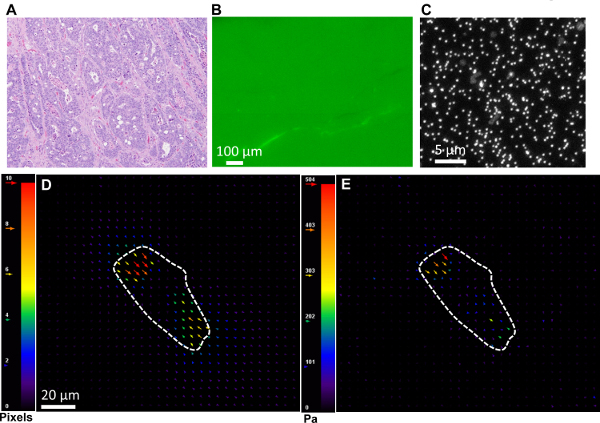 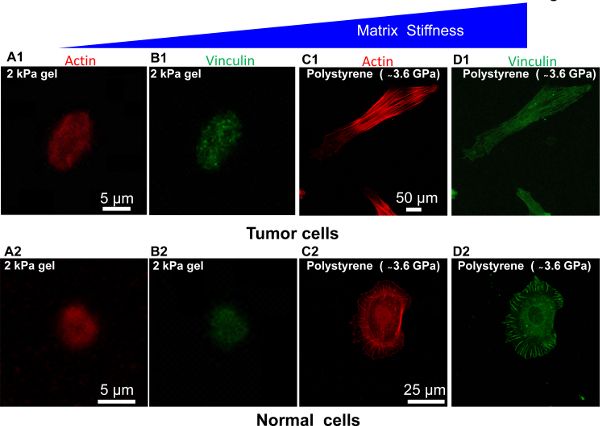 The protocol can be easily adopted/modified for isolation of primary cells from surgical tissues of different human organs or other animals. The incubation time of tissue in the dissociation agents — trypsin and collagenase — needs to be optimized empirically for each application. In addition, the filter size for removing debris and undissociated tissue parts is also an important parameter to choose based on expected maximum cell size in suspended state (40 µm in this protocol).

One limitation of the method is that a few soft gels may lack consistent localization of the fluorescent beads near cell culture surface (Section 3.3) which may adversely affect the following traction cytometry measurements (Section 4.1). This can be easily circumvented by examining the gel surface for bead density and distribution using fluorescent microscopy before cell culture. Consequently, gels with relatively non-homogenous bead distribution can be discarded. Another approach is to use a recently proposed method that allows precise localization of the beads near the cell culture surface17.

Caution should be taken to start processing the surgical samples as soon as they are received, preferably within 45 minutes. The most critical step in the protocol is the optimum exposure time of the tissue in the trypsin and collagenase solution to achieve isolation yield, yet retaining sufficient cell viability. Before culturing the cells on soft hydrogels, the bead density and distribution needs to be confirmed using fluorescent microscopy. Also, a null force image needs to be acquired after confirming that the cell is completely detached from the gel surface.

In summary, a protocol is described that results dissociated single cells suspension from surgical cancerous/normal tissue sample. This isolation of single primary tumor cells from surgical specimens followed by their culture on soft and hard substrates allows various downstream biophysical measurements, e.g., cell stiffness using AFM, intracellular rheology using microinjected particles, cell migration/motility, and vesicle dynamics analysis. These measurements may be used for cancer prognosis. The protocol has been successfully used for the extraction and culture of murine cardiomyocytes as well26. The method presented here may be used to isolate primary human cells from surgical tissues of various organs and to culture them directly on different stiffness substrate for mechanobiology studies.

This project was funded by the National Science Foundation ECCS grant 10-02165, and the Interdisciplinary Innovation Initiative Program, University of Illinois grant 12035. M.Y. A. was funded at UIUC from NIH National Cancer Institute Alliance for Nanotechnology in Cancer ‘Midwest Cancer Nanotechnology Training Center’ Grant R25 CA154015A. Immnunostaining and confocal microscopy imaging were carried out at the Institute for Genomic Biology (IGB), UIUC. M.Y.A. acknowledges the discussions with B. J. Williams of UIUC regarding the isolation experiments. M.Y.A. acknowledges C. Nemeh and Abdul Bhuiya of UIUC for assistance in schematic and materials list preparation. 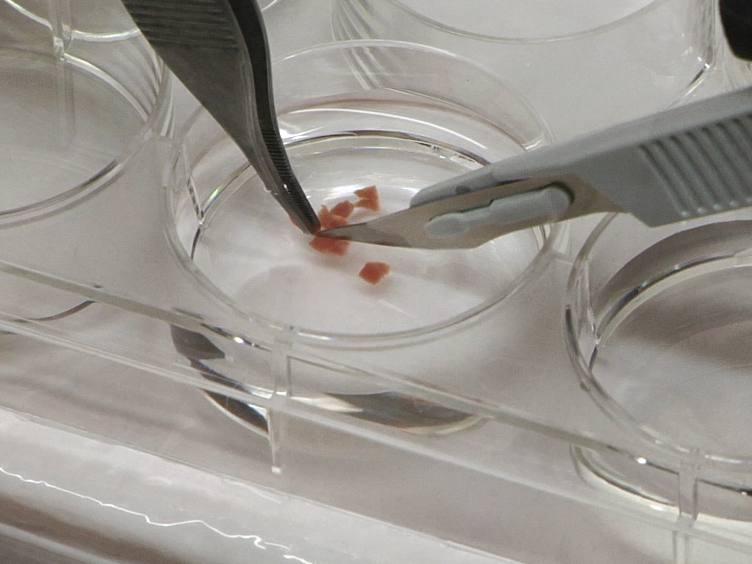