The tumor microenvironment is widely recognized as a critical determinant of cancer cell behavior during breast cancer progression and metastatic spread1-3. The goal of the method presented here is to facilitate the study of breast cancer cells within the microenvironment of human bone tissue, the most frequent site of breast cancer metastasis4-6. Bone is comprised of mineralized and marrow compartments7-9, both of which harbor cells and secreted factors implicated in metastatic progression10,11. Although widely used in vivo mouse models facilitate systemic studies of the metastatic process12-15, cell interactions within the skeleton are not readily accessible for observation and direct perturbation. Model systems for studying and culturing mouse bone tissues and mouse marrow cells provide better access and have yielded many insights regarding crosstalk and mechanisms underlying breast cancer cell metastasis of the murine skeleton16-22. However, studies have suggested that there may be species-specific patterns of osteotropism for bone tissue23,24. These patterns could reflect inherent species-specific differences in bone tissue properties, differences resulting from altered bone marrow populations in immune-deficient mice11, and/or the relatively young age of mice used in experiments, all of which are likely determinants of the bone microenvironment.

In vitro approaches for studying breast cancer cells in human bone co-cultures have typically focused on specific bone cell types such as marrow-derived osteoblasts or stromal cells cultured as monolayers or within engineered 3-dimensional model systems25-35. Although 2-dimensional cell culture models have formed the mainstay of in vitro approaches for cancer research, it has long been recognized that cell behavior is fundamentally altered in monolayer culture systems18,36,37. This has led to the development of engineered microenvironments that mimic the complexity of 3-dimensional living tissues, including matrix- and scaffold-based models composed of natural materials such as collagen, or synthetic polymers seeded with specific cell types to create tissue-like microenvironments36-41. Engineered approaches have also included the use of bioreactor platforms to control and study the hormonal milieu of the microenvironment18,19,41-43. Although biomimetic models and bioreactors provide many elements of a complex tissue microenvironment in a controlled setting, and have been successfully applied to advance the study of breast cancer metastasis to bone18,19,35,42,43, engineered model systems do not generally incorporate the full spectrum of cell types and extracellular matrix components present within the native bone environment.

First we present a protocol for co-culturing breast cancer cells adjacent to bone fragments to measure breast cell proliferation using BLI. In this section, breast cell suspensions are seeded as cell spots in 6-well plates adjacent to bone fragments, which are immobilized by pieces of bone wax. Control wells contain bone wax, but no bone fragment. Once cell spots attach, medium is added and the plate is cultured for 24 hr, after which bioluminescent signal intensity (associated with cell number) is measured with BLI. In the next step we present methods for co-culturing breast cancer cells seeded directly onto bone fragments to study colonization and proliferation. Here the breast cell suspensions are pipetted directly onto the bone tissue fragments, which are monitored in culture by BLI and fluorescence microscopy over time to track colonization and cell number. In this method, the marrow compartment can be flushed from the bone fragments at any time point for analysis of colonized breast cancer cells by flow cytometry, or marrow viability assays.

Femoral heads were collected from equal numbers of male and female patients (44-90 years of age) undergoing elective total hip replacement surgery in the Department of Orthopaedic Surgery at the Stanford University School of Medicine. Each discarded femoral head contains a small portion of the upper femur, which harbors trabecular bone tissue composed of mineralized spicules and marrow. This tissue is accessible through the surgically exposed cross section of the shaft (Figure 2A) using a surgical rongeur to extract small fragments. The histology of the extracted pieces is shown in Figure 2B, revealing the mineralized and marrow components. The appearance of the extracted pieces varies across femoral heads obtained from different patients, ranging from yellow to red, depending on the adipocyte content of the marrow as shown in Figure 2C. We demonstrate the use of these bone tissue fragments in short term assays to measure dynamic interactions with breast cancer cells engineered for luciferase and EGFP expression.

Colonization of MCF-7-fLuc-EGFP cells seeded directly onto bone tissue fragments as measured via BLI at 24 hr is illustrated in Figure 4A, demonstrating decreased signal associated with declining seeding density. A directly-seeded fragment is shown at 48 hr in Figure 4B, after labeling with fluorescent biphosophonate reagent, as imaged by fluorescence microscopy to reveal colonization of the breast cancer cells within the mineralized and marrow compartments. These colonization patterns are also revealed in directly-seeded fragments processed post-experimentally for immunohistochemical staining with cytokeratin antibody (Figures 4C and 4D).

In addition, we illustrate that marrow cells can be flushed from colonized fragments, and that flushed breast cancer cells can be detected among these cells by flow cytometry (Figure 6B), BLI (Figure 6C), and/or fluorescence microscopy (Figure 6D).

Figure 1: Set up of migration experiments. (A) In “forward migration” experiments, the receiver plate wells are filled with previously generated bone tissue culture supernatants. Breast cancer cells that are seeded onto the inner, upper surfaces of Transwell membranes in insert cups containing DME-10% FBS migrate through the membranes and attach to the bottom of the wells for detection by BLI. (B) In “reverse migration” experiments, the receiver plate wells are filled with DME-10% FBS and bone fragments are placed into the insert cups, which also contain DME-10% FBS. Breast cancer cells are seeded onto the outer, lower surface of the insert membranes, and migrate through the membranes to colonize the fragments, which are transferred to fresh plates for BLI. 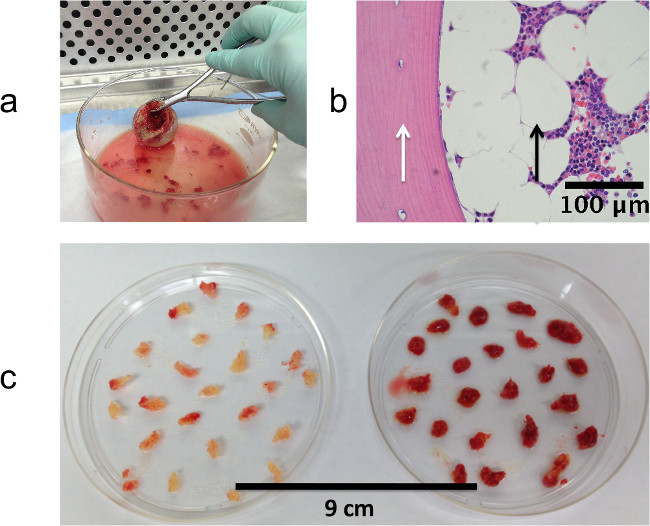 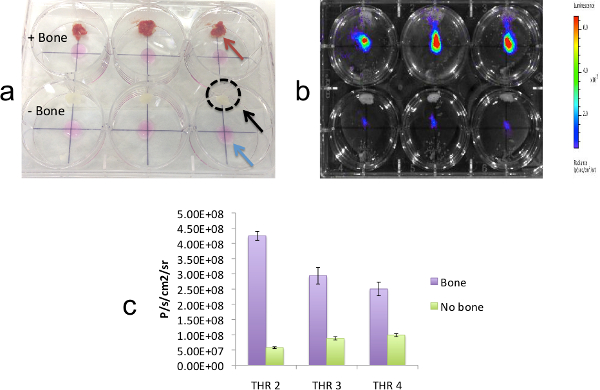 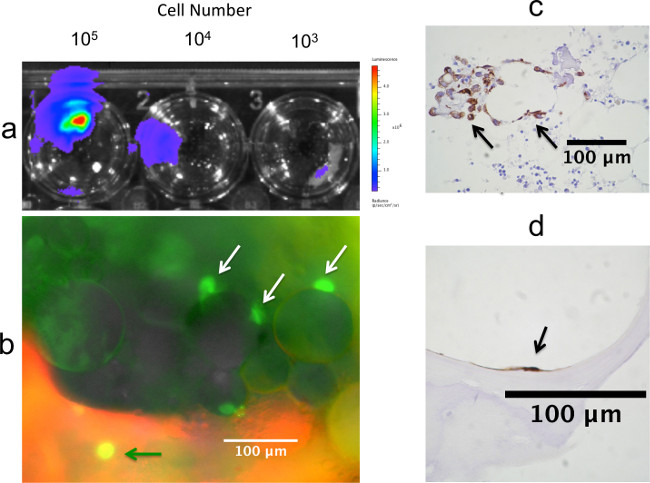 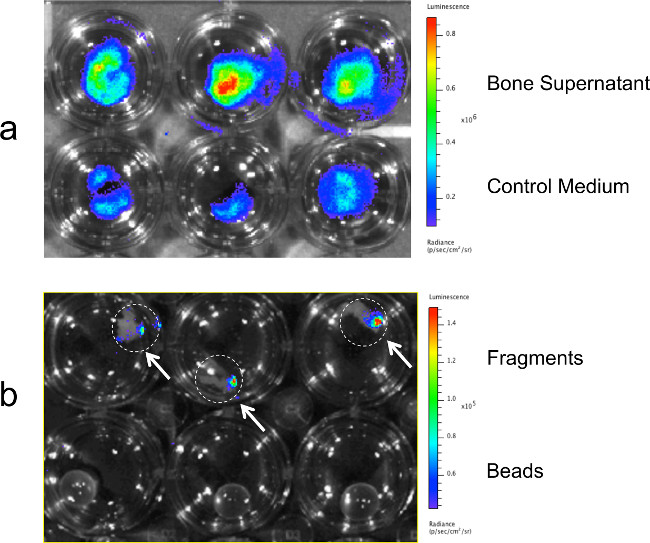 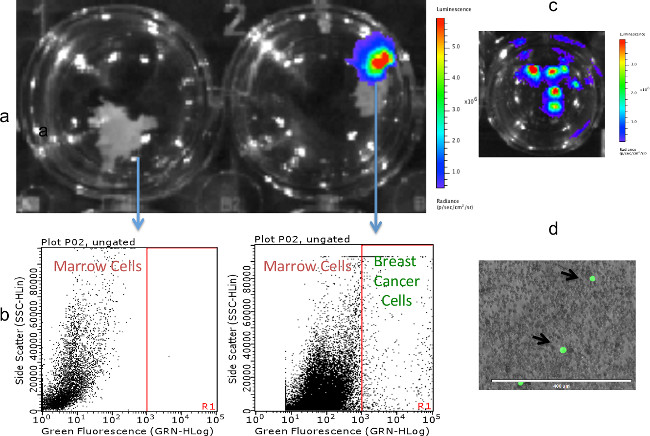 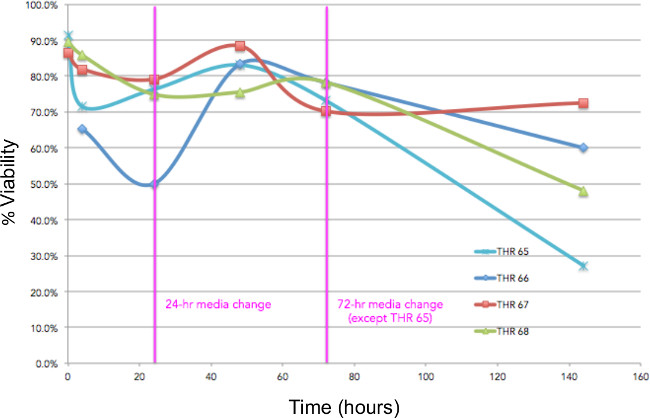 Figure 7: Measuring viability. Viabilities for marrow cells flushed from tissue fragments isolated from 4 THR specimens immediately after collection and at 24, 48, 72 hr, and 6 days of culture in DMEM-10%FBS. Medium was changed at 24 and 72 hr.

Mehra et al. have previously described the postmortem collection and analysis of bone specimens from metastatic prostate cancer patients harvested at the time of autopsy, revealing high quality tissues and validating the use of human bone samples to study the metastatic process47. Here we have described protocols for collecting, processing and using human bone tissue fragments obtained from discarded femoral heads following THR surgery in a short-term co-culture system to study breast cell migration, colonization and proliferation. Approximately 300,000 hip replacement surgeries are performed annually in the U.S. (American Academy of Orthopaedic Surgeons; Orthoinfo.aaos.org), and these specimens are typically discarded. One of the most frequent indications for this surgery is osteoarthritis of the hip joint, leading to gradual breakdown of the cartilage surfaces covering the femoral head, which results in joint pain. During total hip replacement surgery a small portion of the upper femur is removed along with the femoral head. The femur is a common site of breast cancer metastasis48, and these specimens contain trabecular bone tissue, the site of metastatic breast cell colonization. Most patients who undergo hip replacement are 50-80 years old, an age range that brackets the years of peak breast cancer incidence. Thus, these tissues constitute a valuable resource for studying the breast cancer bone metastatic niche.

There are several critical steps and considerations associated with these techniques. First, a good quality surgical ronguer is essential for extracting the small trabecular bone fragments while holding the femoral head in the opposite, gloved hand. Forceps will not work because they are not sturdy enough to extract trabecular tissue containing mineralized spicules. Another important consideration in these assays pertains to breast cell line handling and passaging, particularly in regard to the migration assays. Long-term passage and/or variability in trypsinization procedures can lead to the sequential selection of more/less tenacious cell populations, potentially altering the migratory responses in experiments. Another issue relates to the standardization of experiments, given the variability of surgical tissues obtained from patients of different ages and disease states. To address this, we employ an intra-subject experimental design in which all variables are tested in triplicate (e.g., across three fragments/experimental wells vs. three fragments/control wells) using fragments from a given patient’s surgical specimen. Variables can be tested using this design on specimens from multiple patients, and analyzed for statistical significance using the paired T test for data averaged over replicates, and/or a within-subjects one-way ANOVA for data over replicates. And finally, a primary limitation of this method is the short window of viability during explant culture.

Our measurements revealed marrow viabilities of ~90% on the day of collection, in keeping with viability measurements obtained from bone marrow aspirates49. Over time, however, we observed a gradual drop over days two and three, with dramatic loss of viability by day 6. Although we have not measured the viability of the mineralized compartment, qualitative observations suggest that there is a similar decline in the viability of bone-lining osteoblasts and osteocytes, as seen in Figure 4D. Based on these experiments, we have limited our culture experiments to short term studies performed over 48 or 72 hr. Preliminary experiments (not included) indicated that viability may be improved using commercially available media formulated to sustain marrow cells. However we have not characterized the marrow cell populations in these experiments, and do not know if the improved viability results from the selected outgrowth of certain marrow cell subpopulations. The development of protocols to sustain and extend the viability of these explants will be important to advance this model system.

Although this model is limited to short time periods, its key advantages in relation to other methods include the following features: 1) intact 3-dimensional tissues harboring relevant cell types that constitute the human bone microenvironment, 2) accessibility to the bone microenvironment for monitoring and perturbing dynamic interactions, 3) high numbers of fragments per specimen for replicate experiments, and 4) low cost compared to animal models.

While we have described assays for studying breast cancer metastasis to bone, these specimens and approaches can readily be extended to the study of other bone seeking malignancies such as prostate cancer, as well as other bone pathologies. Although we have used the discarded femoral heads primarily as a source of tissue fragments, these specimens also constitute an additional source of human bone marrow, which is traditionally collected through bone marrow aspiration from young volunteers. And finally, while we have described approaches using cell lines engineered for bioluminescence and fluorescence, most of the procedures can be modified for use with other cells if these cell lines and/or imaging platforms are not available.

No disclosures to report.

These studies were funded, in part, by grants from the Alternative Research and Development Foundation (107588), the National Institute of Health (1U54CA136465-04S1), and the California Breast Cancer Research Program (201B-0141). We thank Drs. Andrew Wilber and R. Scott McIvor for the generous donation of their 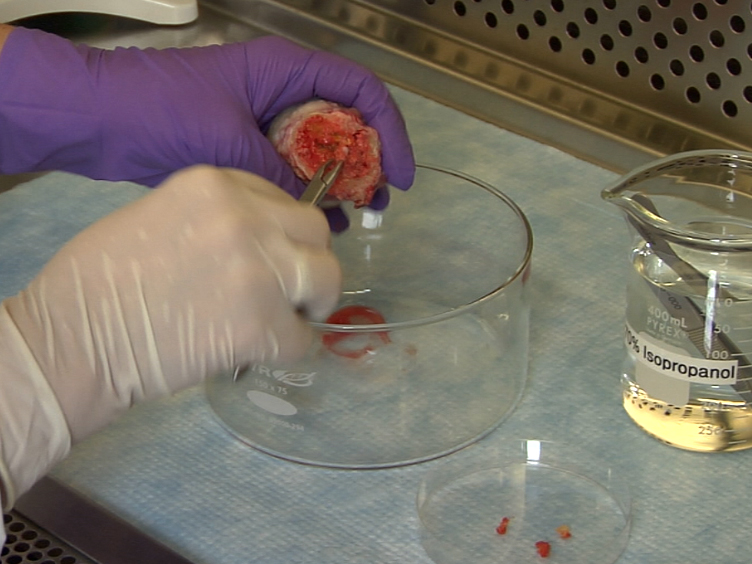