Induction of phosphorylated extracellular-regulated kinase (pERK) is a reliable molecular readout of learning-dependent neuronal activation. Here, we describe a pERK immunohistochemistry protocol to study the profile of hippocampal neuron activation following exposure to a spatial learning task in a mouse model characterized by cognitive deficits of neurodevelopmental origin. Specifically, we used pERK immunostaining to study neuronal activation following Morris water maze (MWM, a classical hippocampal-dependent learning task) in Engrailed-2 knockout (En2-/-) mice, a model of autism spectrum disorders (ASD). As compared to wild-type (WT) controls, En2-/- mice showed significant spatial learning deficits in the MWM. After MWM, significant differences in the number of pERK-positive neurons were detected in specific hippocampal subfields of En2-/- mice, as compared to WT animals. Thus, our protocol can robustly detect differences in pERK-positive neurons associated to hippocampal-dependent learning impairment in a mouse model of ASD. More generally, our protocol can be applied to investigate the profile of hippocampal neuron activation in both genetic or pharmacological mouse models characterized by cognitive deficits.

Neurodevelopmental disorders include a wide and heterogeneous group of disorders such as Down syndrome, fragile X syndrome (FXS), Rett syndrome, neurofibromatosis, tuberous sclerosis and ASD, in which the development and maturation of the central nervous system (CNS) is disturbed early during the prenatal period1. These developmental brain dysfunctions can cause profound, lifelong effects on motor function, language, learning and memory process. A plethora of genetic and environmental factors have been implicated in the pathogenesis of neurodevelopmental disorders during the last few years2,3. Even if the molecular mechanisms underlying the clinical phenotype remain unknown, the above mentioned findings have allowed the development of several mouse models of these disorders. Learning and memory deficits have been identified in a number of these mouse models such as Tsc1+/-, Tsc2+/-, Nf1+/- and En2-/- mice2,4-7. An important challenge in the field of neurodevelopmental disorders is the identification of cellular and molecular processes underlying memory and learning dysfunction. Selected signaling pathways activated during learning or memory can induce the transcription of specific genes and ultimately lead to de novo protein synthesis. Immediate-early genes (IEGs) activation and protein-dependent synaptic modifications are rapidly induced in brain neurons in response to neuronal activity and behavioral training8,9.

Deficits in signaling pathways involving neurofibromin have been associated with impaired learning in neurodevelopmental disorders. Neurofibromin is the product of the NF1 gene, whose mutation causes neurofibromatosis type 1, a complex genetic syndrome characterized by nervous system tumors, behavioral and motor delays, and cognitive disabilities10. Mice heterozygous for Nf1 deletion restricted to inhibitory neurons show deficits in the early phase of long-term potentiation (LTP), as well as compromised spatial learning in MWM5,11,12. Interestingly, Nf1 deficiency in this mouse model leads to an over-activation of Ras signaling in inhibitory interneurons during learning, resulting in increased ERK phosphorylation and finally in an abnormal enhancement of GABA release from these neurons5.

Based on these findings, the visualization of neuronal activity after behavioral tasks represents a way to reconstruct specific circuits involved in neurodevelopmental diseases. The immunohistochemistry protocol described here aims to assess and quantify hippocampal ERK phosphorylation levels following MWM in an ASD mouse model with cognitive deficits. MWM is widely used to investigate hippocampal dependent spatial learning and memory in rodents13,14. We decide to use ERK phosphorylation as molecular readout of task-dependent hippocampal learning, since ERK was shown to have an essential role in learning and memory formation15. Moreover, the ERK pathway is necessary for experience-dependent plasticity in the developing visual cortex16. Finally, mice lacking one of the two ERK isoforms (ERK2) in the CNS show marked anomalies in cognitive, emotional and social behaviors17, indicating that ERK signaling might play a critical role in the pathogenesis of neurodevelopmental disorders such as ASD.

We used Engrailed 2 knockout (En2-/-) mice as a model of neurodevelopmental disorders. En2-/- mice show anatomical and behavioral “ASD-like” features, including loss of forebrain interneurons18, reduced expression of ASD-related genes19, decreased sociability, and impaired cognitive flexibility6,7,20. Spatial learning and memory defects, such as those detected in MWM, are especially robust in En2-/- mice6,7 and might be relevant to the cognitive impairments observed in ASD patients21. Furthermore, we showed that impaired spatial learning in MWM is associated with reduced neurofibromin expression and increased pERK levels in the hilus of En2-/-adult mice7. Here we present the detailed protocol for the immunohistochemical characterization of pERK following MWM in this ASD mouse model.

All experiments were conducted in conformity with the European Community Directive 2010/63/EU and were approved by the Italian Ministry of Health.

3. Preparation of Sections from Perfused Animals

The protocol described here was designed to visualize, by immunohistochemistry, the expression of a specific marker of hippocampal neuron activity after MWM in a mouse model of neurodevelopmental disorders. All the experimental data shown herein were taken from our recent work7. Male and female WT and En2-/- age-matched adult littermates (3-5 months old; weight = 25-35 g) obtained from heterozygous matings were used. Twenty-two mice (11 per genotype) were used for the MWM. Eight mice (4 per genotype) were sacrificed at the end of the MWM probe trial and used for the immunohistochemistry experiments.

To specifically examine the presence of spatial learning deficits in En2-/- mice, we used the MWM test, a classical hippocampal-dependent spatial learning task13,14. On day 1 of training trials, no differences in latency and speed swim have been detected between En2-/- and WT mice, suggesting that both genotypes show similar visual and motor performance. Even if all experimental groups demonstrated the ability to learn during the trails, En2-/- mice reached the goal less efficiently than WT mice starting from the 3rd training day7. On probe trial (day 9), when the hidden platform was removed from the pool, WT mice (Figure 1A) showed a directed path-navigation to the expected target location (dotted black box), while En2-/- mice (Figure 1B) swam more irregularly, displaying a wandering path to the target quadrant (dotted black box). Moreover, during the probe trial WT mice showed closer proximity to platform, as compared to En2-/- mutants (Figure 1C) (one-way ANOVA followed by Holm-Sidak post-hoc test, *p = 0.027, **p = 0.007). The proximity score is considered more sensitive for detecting group differences than traditional measures (time spent and number of crossings in the target quadrant23). 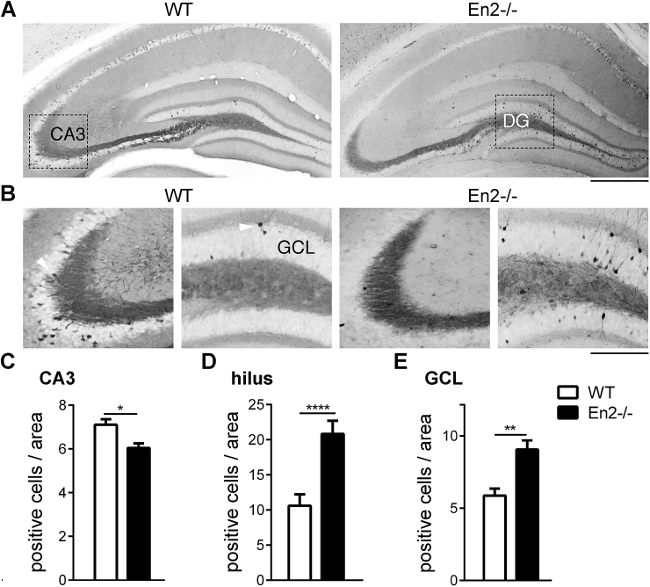 Here, we provide a pERK immunohistochemistry protocol for revealing neuronal activation following MWM in En2-/- mice, a mouse model of neurodevelopmental disorders. Decreased levels of pERK were detected in the CA3 subfield of En2-/- mutants compared to WT. Differently from what observed in CA3 subfield, a general increase of pERK-positive neurons was instead detected in both hilus and GCL of En2-/- mice compared to WT. A possible explanation of this opposite trend in ERK phosphorylation levels might rely on subfield-specific mechanisms of pERK induction following MWM.

The protocol contains several critical steps, such as the evaluation of MWM data, brain fixation, choice and calibration of the antibody, washing procedures, signal detection, and cell counting procedure. All these critical steps should be carefully performed to ensure high quality and reproducible results. For example, if the brain is not fixed properly (steps 3.2 and 3.3), the sections will easily tear during the staining procedures. Moreover, sections should not dry out at any point during the washing steps in order to avoid low signal in staining. Lastly, if a pERK antibody different than that reported here (see Materials List) is used, it is important to calibrate both the antibody concentration and incubation time in order to identify the most robust and appropriate conditions. Furthermore, to ensure an accurate and unbiased outcome for the immunohistochemistry experiments, it is critical that both MWM test and cell counting will be done by operators blind to the animal's genotype or pharmacological treatment. pERK positive neurons can be also detected by immunofluorescence staining using secondary antibody conjugated to an appropriate fluorophore. In this regard, it is necessary to omit the quenching of endogenous peroxidases (step 4.3) and use an aqueous mounting media to preserve the fluorescent dyes (step 4.24).

So far, expression of immediate early gene (IEG,) has been extensively used as a molecular signature of task-dependent hippocampal learning24. This has been essentially addressed by c-fos mRNA in situ hybridization or immunohistochemistry. Conversely, few immunohistochemistry studies systematically addressed neuronal activity by addressing ERK phosphorylation in mouse models of neurodevelopmental disorders. Our recent study7 and previous work5 demonstrated as pERK immunostaining is a reliable marker to trace hippocampal neuronal circuits involved in learning and memory. One limitation of this technique is represented by the several critical steps that might increase the variability of the results. Nevertheless, the experimental approach presented here provides researchers with a concise, easy-to-follow outline of how to profile of hippocampal neuron activation in both genetic or pharmacological mouse models characterized by cognitive deficits. More generally, this protocol can also be used to investigate neuronal activity in cognitive behavioral tasks different than MWM, and to map neuronal activation to other brain regions potentially involved in cognitive functions.

We wish to thank the administrative staff of CIBIO (University of Trento) and CNR Neuroscience Institute for assistance. Giovanni Provenzano is supported by a post-doctoral fellowship from Fondazione Veronesi (Milan, Italy). This work was funded by the Italian Ministry of University and Research (PRIN 2008 grant # 200894SYW2_002 and PRIN 2010-2011 grant # 2010N8PBAA_002 to Y.B.), University of Trento (CIBIO start-up grant to Y.B.) and Telethon Foundation (grant # GGP13034 to Y.B.). 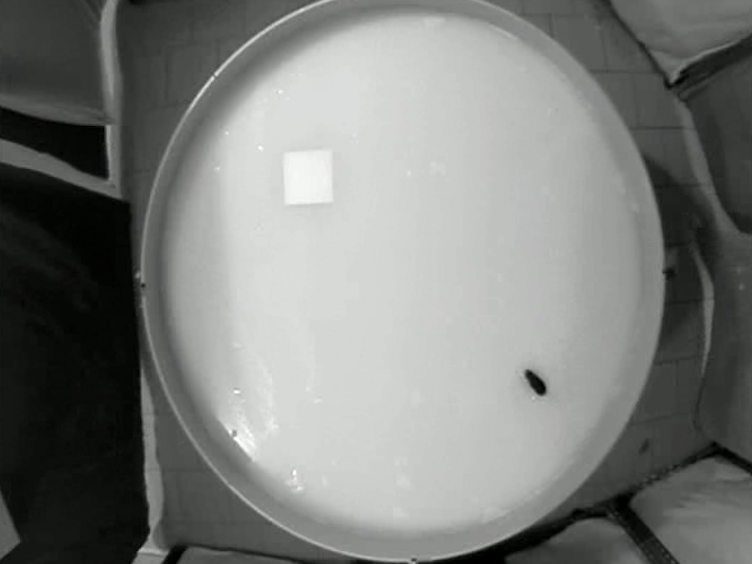