Mitochondria play central roles in the regulation of metabolism and homeostasis. Subtle changes in mitochondrial metabolism that affect organismal physiology could be difficult to detect in whole organism metabolomics studies. Here we describe an isolation method that enhances the detection of subtle metabolic shifts in Drosophila melanogaster.

Mitochondria are cellular organelles responsible for providing 90% of the energy that cells need for normal function1. In recent years it has been recognized that mitochondria play a much more dynamic role in cellular and organismal function than merely producing adenosine triphosphate(ATP), and are now recognized as hubs for the regulation of metabolic homeostasis2,3. Mitochondria are the result of an endosymbiotic process in which distinct microbial lineages merged ~1.5 billion years ago4. As mitochondria evolved into true organelles, genes from the endosymbiont were incorporated in the emerging nuclear genome. In animals today, approximately 1,500 mitochondrial proteins are nuclear-encoded while 37 genes remain in the mtDNA, 13 of which encode mitochondrial proteins that are subunits of the enzyme complexes of oxidative phosphorylation5. Coordination between mitochondria and nuclear compartments is needed to maintain proper mitochondrial function.

2. Rearing of the Drosophila Strains

Using the protocol explained above, we performed metabolomic analysis on mitochondrial enriched fractions and whole animal extracts to test the effect of the drug rapamycin on divergent mtDNAs 7. We delivered 200 µM of rapamycin by dissolving the drug in the fly food. Flies were exposed to rapamycin for 10 days. Metabolites from whole fly extracts and from mitochondrial extracts were obtained by using gas chromatography mass spectrometry (GC/MS) and liquid chromatography-tandem mass spectrometry (LC/MS/MS) using standard solvent extraction methods.

Figure 1 shows an enrichment of the membrane transport protein porin as indicator of mitochondrial enrichment in the mitochondrial fractions. Porin protein was undetectable in the cytosolic fractions. Conversely, tubulin protein was not detected in the mitochondrial fraction, suggesting little contamination of cytosolic proteins. Figure 2 and Figure 3 show principle components analysis (PCA) of the complete metabolite profiles from the ‘native’ D. melanogaster strain (OreR) and the ‘disrupted’ strain of flies harboring mtDNA from D. simulans and nuclear DNA from D. melanogaster strain OreR (sm21). Both strains were exposed to the drug rapamycin. The data are presented as a bi-plot of principle component axes 1 and 2 to visualize the effect of treatment and mtDNAs7,9. Metabolites obtained using a standard whole fly extract are shown in Figure 2A. Figure 2B shows a similar PCA plot for metabolites in the mitochondrial enriched extracts. For whole fly extracts (Figure 2A), rapamycin treatment sifts the samples to significantly lower values of PC2. Yet, changes in metabolites due to mtDNA genotype are subtle, since OreR and sm21 mtDNAs exposed to rapamycin or control vehicle are closely adjacent or overlap in PCA space. However, when using enriched mitochondrial extracts, mtDNAs show distinct rapamycin effects on mitochondrial metabolite profiles. In particular, rapamycin has a strong effect on the metabolite profiles of the OreR strain, shown by the displacement along the PC1 axis. But, on the ‘disrupted’ sm21 mtDNA genotype, the metabolite profile for the control-food condition is displaced from that of the native OreR strain (red and black polygons, respectively, in Figure 2B). As a result, the rapamycin treatment has noticeably less of an effect on the shift of the metabolite landscapes in the disrupted mtDNA genotype, sm21 (compare red and blue polygons in Figure 2B).

Figure 3 shows PCA plots of metabolites involved in energy homeostasis (a subset of all metabolites, limited to cofactors, vitamins and Krebs cycle intermediates), often located inside of the mitochondria. Here again, metabolite shifts from enriched mitochondrial fractions show a different behavior than those from whole animal extracts.

Figure 3. Principal component analysis of metabolites involved in energy homeostasis on flies carrying OreR and sm21 mitochondrial haplotypes. (A) PCA of 12 energy metabolites from whole fly extracts and 13 energy metabolites from mitochondrial extracts. (B) Polygons surrounding points are intended to aid the visualization of the six replicate samples for each treatment. Please click here to view a larger version of this figure.

The most critical steps in this protocol are: 1) rearing enough flies in abundant space. It is very important to not overpopulate the demography cages with more than 150 flies each; 2) changing the food of the cages frequently to avoid food competition and nutritional stress; and 3) maintaining all samples at 4 °C to ensure integrity during the isolation of the mitochondrial fraction. It is also recommended to chill the isolation buffer, the wash buffer, and the glass-teflon dounce homogenizer before use. To reduce cytosolic contamination of the enriched mitochondrial factions, the mitochondrial pellet from step 3.5 could be washed with wash buffer.

The extraction of metabolites from enriched mitochondrial fractions requires a high number of replicate samples (6 replicates/experimental condition). In total, 24 cages are used for Figures 1 and 2. We recommend performing the extraction of all the samples the same day to decrease experimental variability. Although feasible, this protocol entails careful planning and preparation of materials needed ahead of time. Labeling of the tubes ahead of time, and designing a plan to ensured consistency of waiting times between samples is needed to preserve sample quality and to decrease variation between replicates. 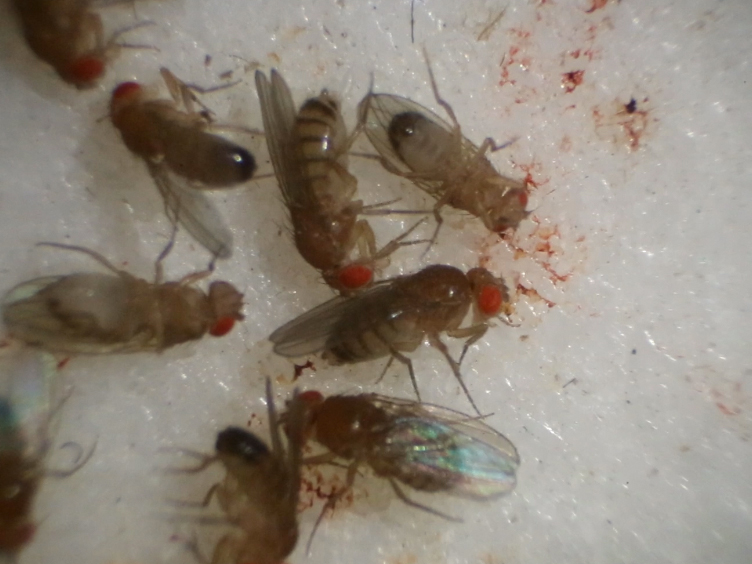