Subcutaneous implantation of osmotic pumps provides a convenient approach for prolonged and consistent delivery of compounds. This approach has been used extensively to study both abdominal and thoracic aortic aneurysms in mice.

Aortic aneurysms exhibit permanent luminal expansion of the aorta that portends rupture and usually leads to death. This disease occurs in both abdominal and thoracic aortic regions, which are termed as abdominal aortic aneurysms (AAAs) and thoracic aortic aneurysms (TAAs), respectively. Due to an incomplete understanding of molecular mechanisms and pathophysiologic processes, there is no proven medical therapy that can prevent expansion or rupture of either type of aortic aneurysms. Since it is difficult to acquire patient samples and perform experiments in humans directly, research focusing on defining mechanisms of AAAs has been frequently extrapolated from animal models. A commonly used animal model is subcutaneous infusion of angiotensin II (AngII) into mice. Compared to other surgical approaches for inducing AAAs in mice, such as intra-aortic elastase perfusion or peri-aortic application of calcium chloride that require laparotomy1,2, this method does not require entry into the body cavity and requires minimal surgical expertise3,4.

Subcutaneous infusion of AngII through osmotic pumps to induce AAAs was initially reported in low density-lipoprotein (LDL) receptor -/- mice fed a saturated fat-enriched diet3, and subsequently in apoE -/- mice fed a normal laboratory diet4. Many recent studies have also demonstrated that AngII induces AAAs in normolipidemic mice5-7. The approach of infusing AngII has been applied to induce AAAs and explore molecular mechanisms as well as development of potential therapeutic strategies (e.g., 5-15) since this model recapitulates many features observed in human AAAs. For example, risk factors of human AAAs such as smoking, aging, and male gender also augment AngII-induced AAAs in mice16,17. The association of hypercholesterolemia with AAAs in humans requires clarification. However, it has been consistent that hypercholesterolemia augments AngII-induced AAAs in mice18. Pathologies of AngII-induced AAAs in mice are highly heterogenous and are characterized by profound macrophage infiltration, collagen degradation, thrombotic formation and resolution, and neovascularization19-21. In contrast to the most common infrarenal aortic location of AAAs in humans, AngII-induced AAAs in mice occur in the suprarenal aortic region. Another ubiquitous feature of AngII-induced AAAs is the transmural medial break, leading to transmural thrombosis. It is unclear whether transmural elastin rupture occurs in humans since pathological development of AAAs in humans has not been exclusively studied due to lack of aneurysmal tissues from earlier stages.

The overall goal of subcutaneous AngII infusion into mice is to study pathological features and molecular mechanisms of AAAs and TAAs.

Ethics Statement: Mouse studies are performed with approval of the University of Kentucky Institutional Animal Care and Use Committee (IACUC protocol number: 2006-0009). Mice are euthanized at termination using an overdose cocktail of ketamine (~ 210 mg/kg) and xylazine (~ 30 mg/kg).

NOTE: This protocol uses the example of infusion of AngII (1,000 ng/kg/min) for 4 weeks in 4 male LDL receptor -/- mice fed a saturated fat-enriched diet.

The 4 male LDL receptor -/- mice described in the Protocol section were euthanized after 4 weeks of AngII infusion. Aortas were harvested, cleaned, and imaged to visualize aortic dilations. As shown in Figure 3, aortas have several different characteristics including expansion of the suprarenal region (AAAs; Figure 3A), expansion of the ascending region (TAAs; Figure 3B), or expansion of both regions (presence of both AAAs and TAAs; Figure 3C), whereas morphology in one mouse was grossly normal (Figure 3D). Dilation of the abdominal aorta is quantified by measuring the ex vivo maximal width of the suprarenal region, as illustrated by the red line in Figure 3A. To measure ascending aortic dilation, aortas were cut open and pinned as shown in Figure 4. Intimal surface area was measured in the ascending aortic region (area surrounded by the red lines in Figure 4A) to quantitate TAAs. A ruler was included in each image to standardize measurements, as shown in both Figures 3 and 4. 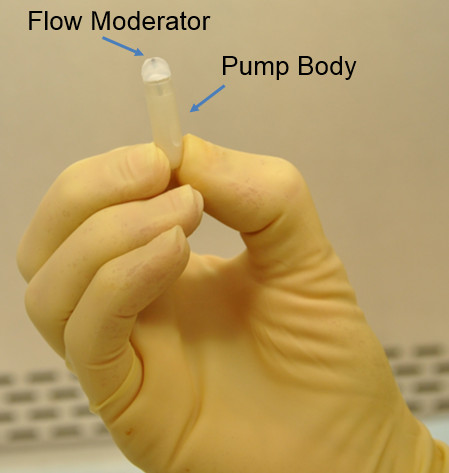 Figure 1. Representative image of filled osmotic pump. Each pump contains two separate parts: a main body and a flow moderator. After filling the pump body with AngII, the flow moderator is inserted to seal the pump. 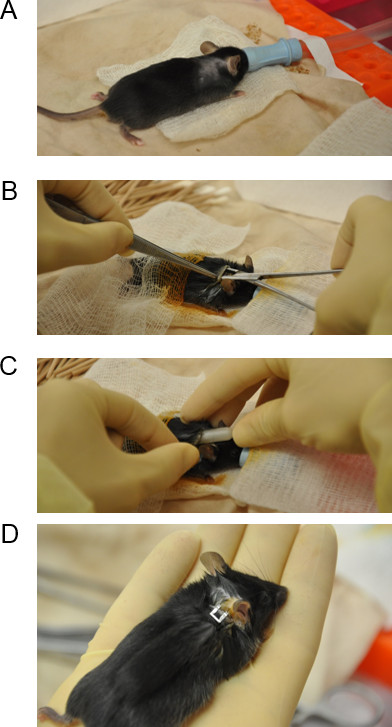 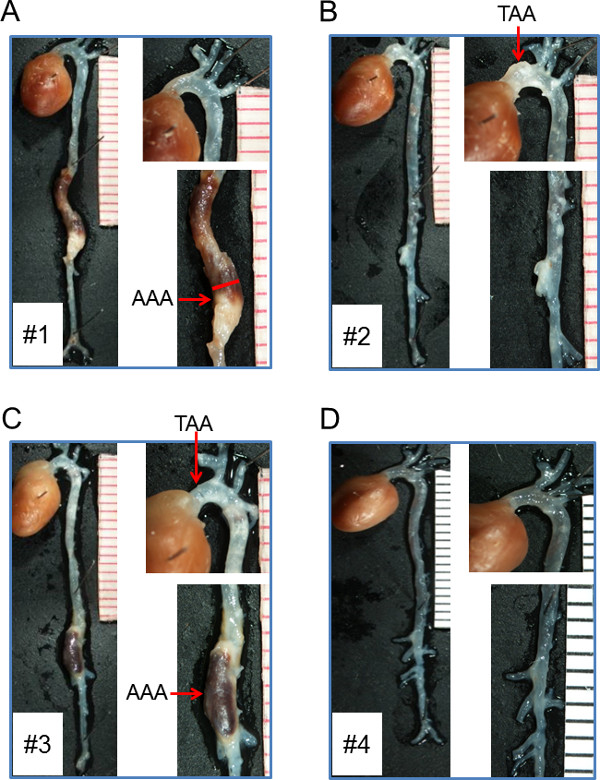 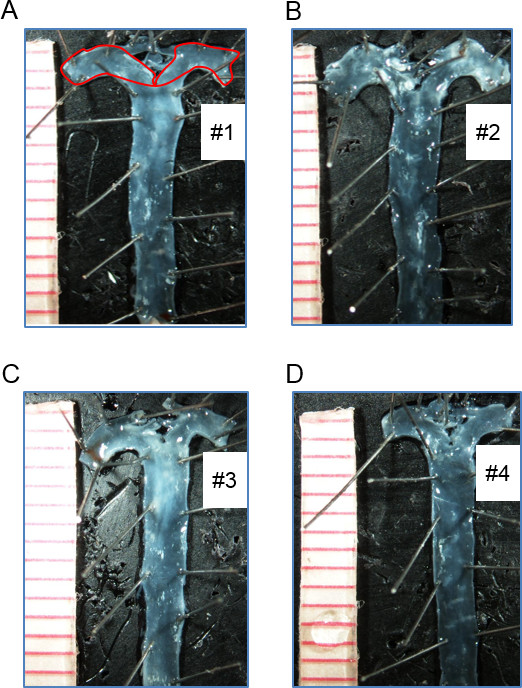 Osmotic pumps delivering AngII subcutaneously is a routine approach to inducing aortic aneurysms in mice. Based on data from many laboratories, there have been consistent findings that this is a reliable and reproducible method to study both AAAs3,4 and TAAs22-26 in mice. Therefore, this mouse model is considered a model that recapitulates several features of human aortic aneurysms and provides mechanistic insights into these devastating diseases.

In summary, AngII infusion is achieved by subcutaneous implantation using osmotic pumps to induce aortic aneurysms in mice. This method delivers AngII constantly at a defined rate for designated durations that are used to study both AAAs and TAAs.

Publication of this article is sponsored by Alzet. 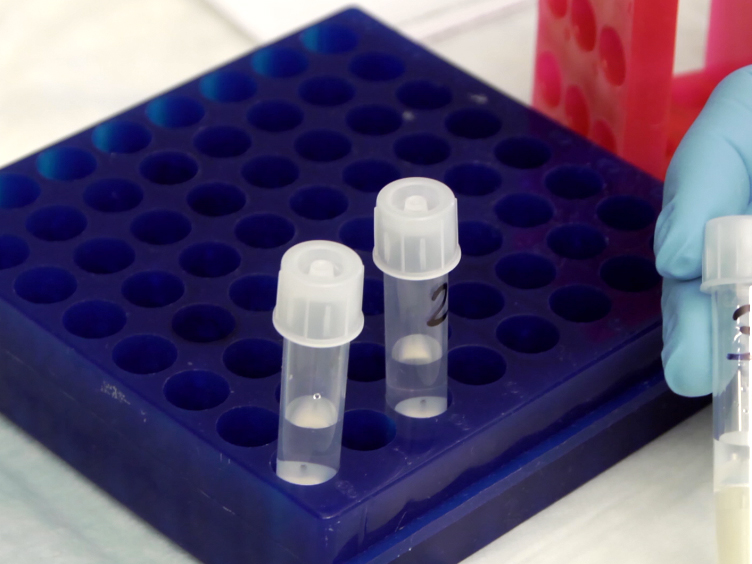