The postembedding immunogold method is one of the most effective ways to provide high-resolution analyses of the subcellular localization of specific molecules. Here we describe a protocol to quantitatively analyze glutamate receptors at retinal ribbon synapses.

Retinal ganglion cells (RGCs) receive excitatory glutamatergic input from bipolar cells. Synaptic excitation of RGCs is mediated postsynaptically by NMDA receptors (NMDARs) and AMPA receptors (AMPARs). Physiological data have indicated that glutamate receptors at RGCs are expressed not only in postsynaptic but also in perisynaptic or extrasynaptic membrane compartments. However, precise anatomical locations for glutamate receptors at RGC synapses have not been determined. Although a high-resolution quantitative analysis of glutamate receptors at central synapses is widely employed, this approach has had only limited success in the retina. We developed a postembedding immunogold method for analysis of membrane receptors, making it possible to estimate the number, density and variability of these receptors at retinal ribbon synapses. Here we describe the tools, reagents, and the practical steps that are needed for: 1) successful preparation of retinal fixation, 2) freeze-substitution, 3) postembedding immunogold electron microscope (EM) immunocytochemistry and, 4) quantitative visualization of glutamate receptors at ribbon synapses.

Glutamate is the major excitatory neurotransmitter in the retina1. Retinal ganglion cells (RGCs), receiving glutamatergic synaptic input from bipolar cells2, are the output neurons of the retina that send visual information to the brain. Physiological studies showed that synaptic excitation of RGCs is mediated postsynaptically by NMDA receptors (NMDARs) and AMPA receptors (AMPARs) 3,4,5. Although excitatory postsynaptic currents (EPSCs) in RGCs are mediated by AMPARs and NMDARs3,5,6,7,8 , spontaneous miniature EPSCs (mEPSCs) on RGCs exhibit only an AMPARs-mediated component 4,5,9. However, reducing glutamate uptake revealed an NMDAR component in spontaneous EPSCs5, suggesting that NMDARs on RGC dendrites may be located outside of excitatory synapses . Membrane-associated guanylate kinases (MAGUKs) such as PSD-95 that cluster neurotransmitter receptors, including glutamate receptors and ion channels at synaptic sites, also exhibit distinct subsynaptic expression patterns 10,11,12,13,14.

Over recent decades, confocal immunohistochemistry and pre-embedding electron microscope (EM) immunohistochemistry have been employed to study membrane receptor expression. Although confocal immunostaining reveals broad patterns of receptor expression, its lower resolution makes it impossible to use to distinguish subcellular location. Pre-embedding EM studies in mammalian retina indicate that NMDAR subunits are present in postsynaptic elements at cone bipolar cell ribbon synapses 15,16,17. This is in apparent contrast to physiological evidence. However, diffusion of reaction product is a well-known artifact in the pre-embedding immunoperoxidase method. Hence, this approach does not usually give statistically reliable data and may exclude distinction between localization to synaptic membrane versus extrasynaptic membrane 18,19,20,21. On the other hand, physiological and anatomical data are consistent with a synaptic localization of AMPARs on RGCs 3,5,7,9,22. Thus, glutamate receptors and MAGUKs at retinal ribbon synapse are localized not only to the postsynaptic but also to the perisynaptic or extrasynaptic membrane compartments. However, a high-resolution quantitative analysis of these membrane proteins in a retinal ribbon synapse is still needed.

Here, we developed a postembedding EM immunogold technique to examine the subsynaptic localization of NMDAR subunits, AMPAR subunits and PSD-95 followed by estimating the number, density and variability of these proteins at synapses onto rat RGCs labeled using cholera toxin subunit B (CTB) retrograde tracing methods.

Care and handling of animals were in accordance with NIH Animal Care and Use Committee Guidelines. Postnatal day (P) 15-21 Sprague-Dawley rats, injected with 1-1.2% CTB bilaterally through the superior colliculus, were maintained on a 12:12-hr light:dark cycle.

NOTE: This freeze-substitution method is modified from an earlier published protocol 19,20. Also, it is crucial that the instruments are very cold (wear gloves); otherwise, the tissue may thaw partially when touched with the instruments. All of these steps are done within the AFS chamber and the instruments are never allowed to move above the rim of the chamber. Similarly, proper cooling of all chemicals used in the AFS is necessary.

The results presented here demonstrate strikingly different subsynaptic localization patterns of GluA 2/3 and NMDARs on RGC dendrites in rat retina, as described previously 24,25. 77% of GluA 2/3 immunogold particles in RGC dendritic profiles were located within the PSD (Figure 1A), similar to most central synapses. However, NMDARs were located either synaptically or extrasynaptically. 83% of GluN2A immunogold particles were localized in the PSD (Figure 1C, 2A, 2B), preferentially at OFF synapses, and the gold particles were more concentrated at the center of the PSD (Figure 2C). In contrast, the large majority of particles labeling for GluN2B (96%) were located outside the PSD (Figure 1B, 2A, 2B), distributed primarily along the extrasynaptic plasma membrane, with the peak particle density at 180 nm from the edge of the PSD (Figure 2B). In particular, GluN2B exhibited a preference for ON synapses. In a subset of experiments, simultaneous labeling of GluN2A, PSD-95 and CTB indicated that GluN2A and PSD-95 were colocalized in the PSD of OFF RGC dendrites (Figure 1D), where NR2A was in the dendritic membrane while PSD-95 was beneath the membrane, suggesting that they are anchored at the PSD. A significant difference in gold density between perisynaptic membrane and mitochondrial membranes was observed, suggesting a specific labeling in the former (Figure 2D). 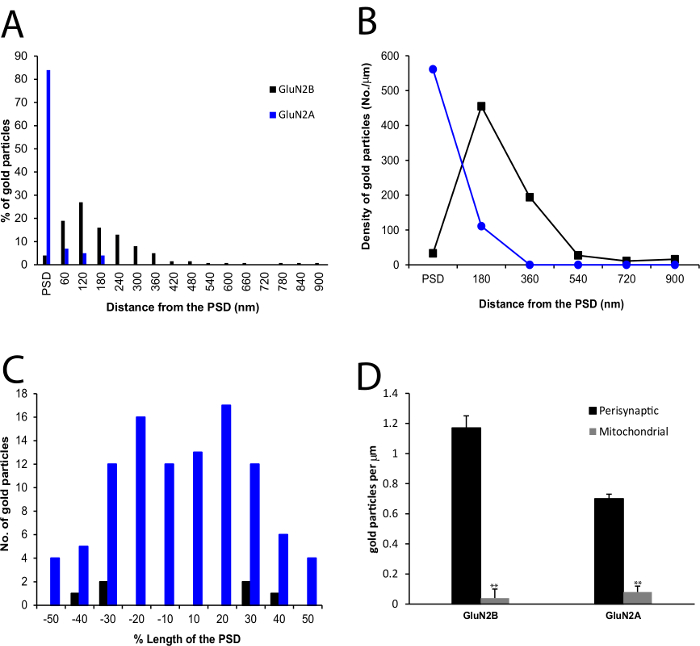 EM immunogold allows the detection of specific proteins in ultrathin tissue sections. Antibodies labeled with gold particles can be directly visualized using EM. While powerful in detecting the subsynaptic localization of a membrane receptor, EM immunogold can be technically challenging, and requires rigorous optimization of tissue fixation and processing methods.

To strike an optimal balance between membrane integrity and antigenicity, we tested different fixation methods and times. For example, a successful protocol used for postembedding EM NMDAR at central synapses 19,20 failed to detect NMDAR immunoreactivity in the retina. This study employed gentle fixation and short incubation times to avoid reducing of NMDA receptor antigenicity after strong, prolonged fixation 16.

The freeze-substitution method was first developed for ultrastructural localization of glutamate receptors in the early 1990s 27, and involves low temperature infiltration and polymerization in a nonpolar, hydrophobic resin, HM20 28, needed for optimal postembedding immunogold labeling. The specific freeze-substitution method used here was developed for labeling glutamate receptors in the cochlea 29 and optimized for glutamate receptors in central synapses 18,19,20,30, and it has been modified further in recent years. The low temperature infiltration and polymerization of the resin helps to preserve antigenicity of heat-labile molecules and minimizes lipid extraction and adverse chemical reactions between resin and tissue 19,31. Combined with the fixation methods described above, this freeze-substitution method provides good antigenicity and reasonable structural preservation.

The postembedding immunogold technique used here has several advantages compared with the preembedding immunoperoxidase method. Although the preembedding immunoperoxidase method has higher sensitivity 15,16,17,19,20,21, diffusion of reaction product is unavoidable, resulting in nonspecific labeling 26,32. Moreover, the peroxidase enzyme reaction is not linear 21, making it difficult to evaluate quantitatively the precise subsynaptic localization of receptors 18,21. The postembedding immunogold method employs a non-diffusible marker and performs the immunoreaction on the surface of resin-embedded tissue, which reduces diffusible artifacts and permits higher spatial resolution 18,33,34. Gold particles can be directly counted, moreover, making it possible to estimate the number, density and variability of these receptors at retinal ribbon synapses. In addition, postembedding immunogold enables localization of multiple receptors to be simultaneously examined at the EM level. This protocol has been successfully employed in identifying localization of other membrane proteins (e.g., GABA receptors and calcium-activated potassium [BK] channels) in retinal rod bipolar synapses35.

Several factors are crucial for the success of this protocol. First, fast and gentle fixation is the first important step for the preservation of antigenicity and fine structure. Second, the "pH-shift" protocol for fixation is beneficial for optimal detection of the antigenic epitopes and good ultrastructural preservation 36. Third, freeze-substitution preserves the antigenicity of the receptors, while maintaining reasonable fine structure. Fourth, during immunogold staining, TBST buffer (with Triton X-100) is used with antibody incubation, while TBS buffer (without Triton X-100) is used for washing between and after the incubation of antibodies; this may minimize alterations in fine structure. Fifth, during exchange of solutions, sections are kept wet to reduce artifacts caused by tissue drying.

While the postembedding immunogold protocol described here provides an enhanced method for identifying membrane receptors at the retinal ribbon synapse, it is not quite as sensitive as preembedding immunohistochemical methods; but the latter are not a good option because they suffer from relatively lower specificity and are less amenable to quantification as noted above. Our protocol also compromises fine structure to some extent, as compared to more strongly fixed tissue not prepared for immunolabeling. Hopefully, future innovations will overcome these limitations. 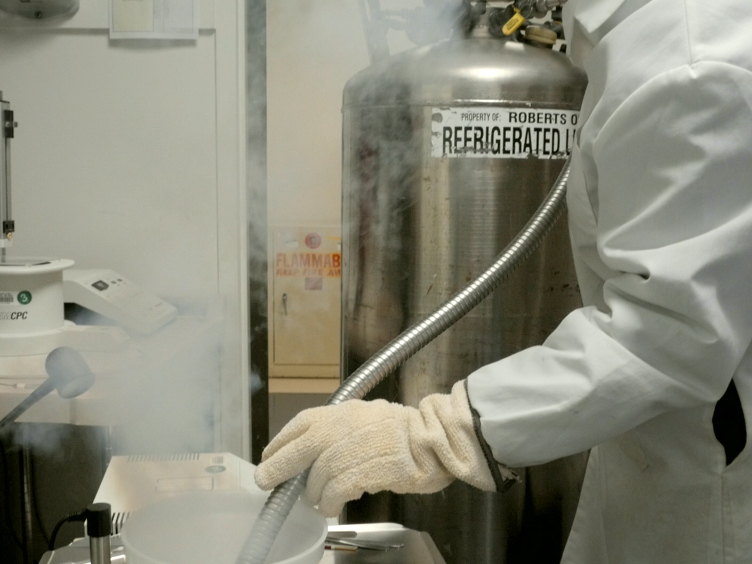