The primary goal of this study is to develop a reliable method of measurement (estimation) of synaptic integrity of the neuronal dendritic network. Here we describe quantification of F-actin puncta in primary rat cultured neurons using a combination of Phalloidin staining and immunocytochemical (ICC) detection of dendrites with subsequent analysis using specialized (NIS-Elements) software.

Labeled phallotoxins have similar affinity for both large and small filaments (F-actin) but do not bind to monomeric globular actin (G-actin), unlike some actin antibodies 1. Nonspecific binding of Phalloidin is negligible, thus providing minimal background during cellular imaging. Phalloidin is much smaller than antibodies that would typically be used to label cellular proteins for fluorescent microscopy, which allows for much more intense labeling of F-actin by Phalloidin. Thus, detailed images of F-actin localization in neurons can be obtained through the use of labeled Phalloidin.

Phalloidin (F-actin) staining of neuronal dendrites generates discrete "hot spots" or bright "puncta", which represent a variety of dendritic structures, including mature spines, non-spiny synapses 2 and immature spines. Immature spines include thin filopodia and some forms of patch morphology, and may represent the initiation of spinogenesis 3. Immature spines and non-spiny patches lack PSD95 4. Changes in production of F-actin lead to subsequent changes in not only spines but also additional dendritic structures, thus making Phalloidin an important tool for investigating synaptodendritic integrity 5-7. In general, numbers of Phalloidin-positive (F-actin) puncta reflect a balance among active synapses (excitatory and inhibitory), actin dynamics and synapse stability 8.

Although it is important to study specific types of synapses (i.e., excitatory spines), when the target of a treatment is unknown it is necessary to first estimate the general integrity of a variety of dendritic structures. Since F-actin is a major component of dendritic spines and other structures, including inhibitory synapses, an altered number of F-actin puncta may indicate a synaptopathy. This synaptopathy may then be investigated further for more specific alterations. Our quantification method for detecting multiple synaptic types/structures yields an overall estimate of dendritic synaptic alterations (increases and decreases) following various experimental treatments.

All animal protocols were reviewed and approved by the Animal Care and Use Committee at the University of South Carolina (assurance number: A3049-01).

Note: The immunofluorescent labeling of primary cortical cell cultures was carried out in glass bottom 35 mm cell culture dishes with a working volume of 1 ml.

In the present methods, we first culture rat cortical neurons at low density in 35 mm glass-bottom dishes, which allows us to identify the dendrites of individual neurons. In Figure 1, the differential interference contrast (DIC) images show the morphological changes in developing fetal rat cortical neurons at days 4, 6, 10, 14, 21 and 27 in vitro. Note that the length and number of dendrites increase with maturation of cultured rat primary neurons. Neurons are used in experiments only after 14 days maturation.

To detect dendritic and synaptic changes, we combine the Phalloidin F-actin labeling with MAP2 antibody detection of dendrites. Since Phalloidin labeling of F-actin is very rapid (20-30 min), it is possible to visually estimate the integrity of synaptodendritic network before proceeding with ICC antibody labeling (Figure 2). MAP2 indicates the intact dendrites and overlies the Phalloidin staining. This allows confirmation that the F-actin puncta are located on neuronal dendrites and not localized to other cells, such as astrocytes.

Next, we acquire high resolution images of co-labeled Phalloidin (F-actin)/MAP2 neurons and analyzed randomly selected neurons. Fine filopodia, spine protrusions, and F-actin patches were considered F-actin rich structures and were included in our studies (Figure 3). Segments of the second order dendrites (MAP2 positive) were selected for the analysis of F-actin puncta densities. MAP2 positive staining is used to confirm the neuronal localization of the F-actin puncta. Computer-assisted detection and counting of Phalloidin (F-actin) labeled (green fluorescence channel) synaptic puncta was performed via use of specialized software. There is a step by step detailed protocol in Figure 4 describing the use of the software package. We have reported that computer-assisted F-actin counting correlates very well with manual counting of F-actin and that the inter-observer correlation in F-actin puncta counts between two trained observers is very high (r2=0.97).

We found that F-actin puncta may either increase or decrease in response to experimental treatments. In Figure 6, cultured neurons were treated with the uncompetitive NMDA receptor antagonist memantine, significantly increasing F-actin positive puncta. In contrast, treatment with a combination of Methamphetamine+HIV-1 Tat resulted in significant loss of F-actin puncta. 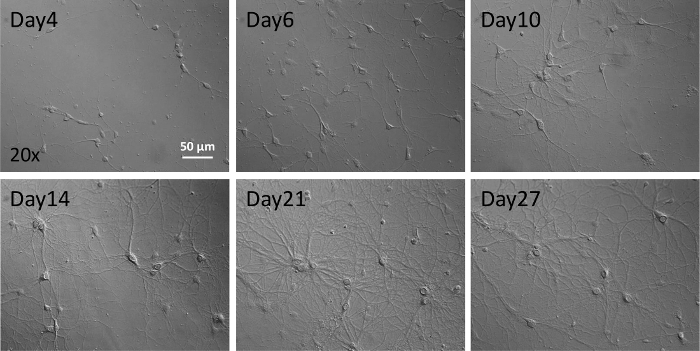 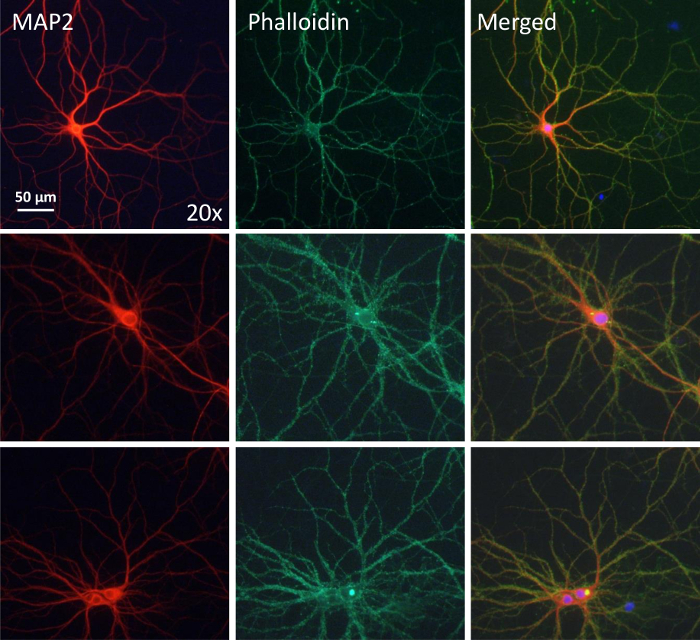 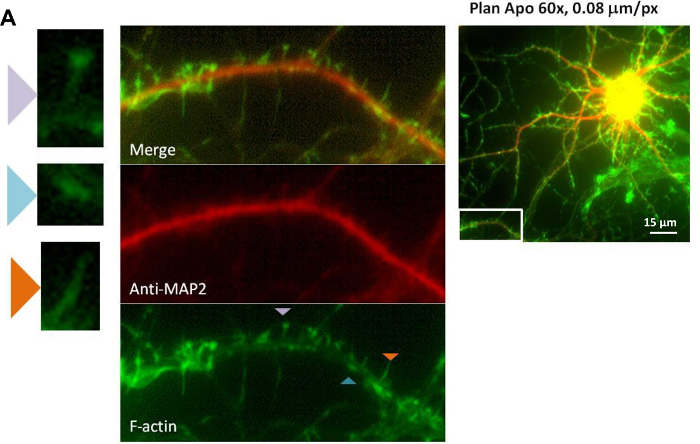 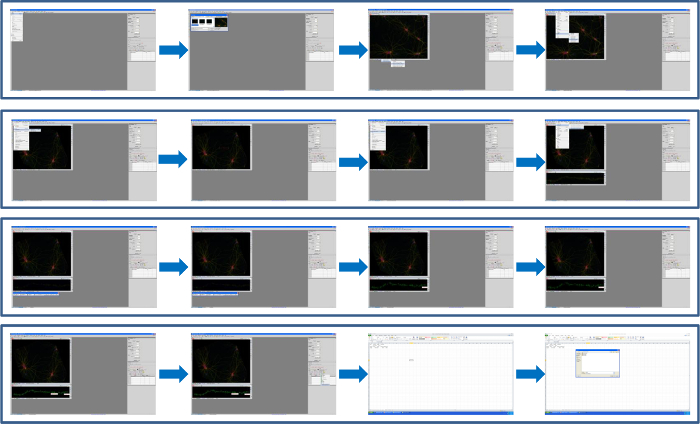 Figure 4. Demonstration of software package: step by step instructions. Please click here to view a larger version of this figure. 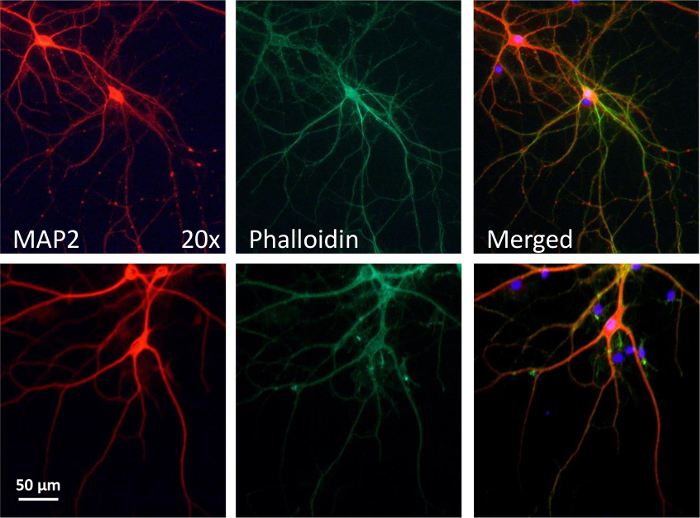 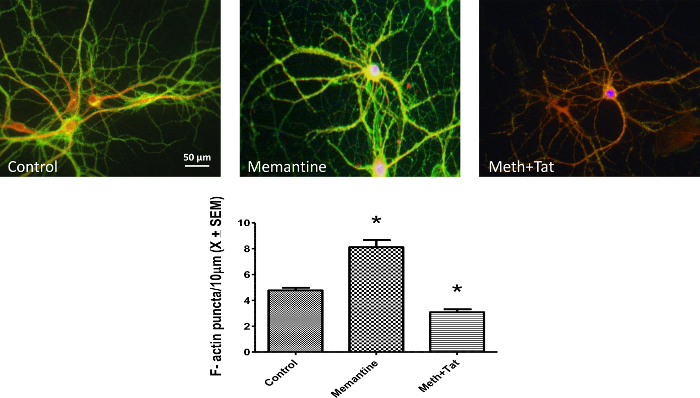 In this protocol, we describe culturing rat cortical neurons at low density in 35 mm glass-bottom dishes which allows us to identify dendrites of individual neurons. Next, we use Phalloidin and MAP2 staining to detect dendritic changes. Then, we used specialized software to quantify changes in F-actin puncta.

To determine changes in F-actin puncta the entire neuronal network of an individual neuron must be clearly visible, this allows selection of appropriate second order dendritic segments from a single neuron. Low-density plating is critical in order to both visualize individual neurons as well as to minimize the presence of glial cells. Astrocytes also contain F-actin and without a neuronal marker, could confound the analysis of F-actin positive puncta. Low-density cultures and the use of Neurobasal medium are helpful in decreasing astrocytic proliferation in the cell cultures. However, given the caveat that the F-actin protein is not specific to neurons, specific neuronal protein markers, such as MAP2, should be used together with Phalloidin. Other protein antibodies may also be used in conjunction with Phalloidin, such as TH (tyrosine hydroxylase) for identification of specific neuronal populations in culture.

One general technique for studying synapses and synaptic morphology is immunocytochemistry (ICC). ICC is popular since many antibodies for synaptic proteins are readily available including PSD 95, NMDAR (post-synaptic) as well as synaptophysin, bassoon and synapsin I (pre-synaptic)11. However, some structures cannot be detected by ICC (such as thin filopodia), but a combination of F-actin Phalloidin labeling with antibody detection (or double labeling with two different antibodies) may allow for specific and complex investigation of synaptic subpopulations and differential responses to experimental treatments.

None of the authors have conflicts of interest to declare. 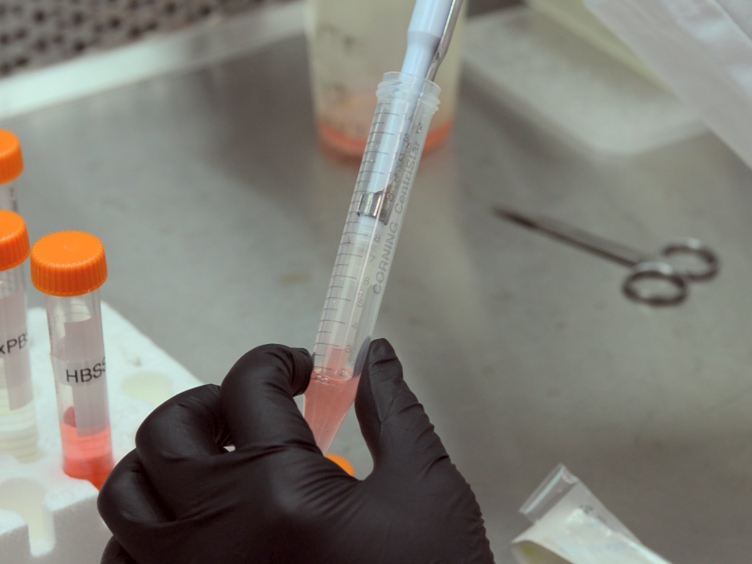