In Parkinson's Disease (PD) there is widespread neuronal loss throughout the brain with pronounced degeneration of dopaminergic neurons in the SNc, leading to bradykinesia, rigidity, and tremor. The identification of living dopaminergic neurons in primary Ventral Mesencephalic (VM) cultures using a fluorescent marker provides an alternative way to study the selective vulnerability of these neurons without relying on the immunostaining of fixed cells. Here, we isolate, dissociate, and culture mouse VM neurons for 3 weeks. We then identify dopaminergic neurons in the cultures using eGFP fluorescence (driven by a Tyrosine Hydroxylase (TH) promoter). Individual neurons are harvested into microcentrifuge tubes using glass micropipettes. Next, we lyse the harvested cells, and conduct cDNA synthesis and transposon-mediated "tagmentation" to produce single cell RNA-Seq libraries1,2,3,4,5. After passing a quality-control check, single-cell libraries are sequenced and subsequent analysis is carried out to measure gene expression. We report transcriptome results for individual dopaminergic and GABAergic neurons isolated from midbrain cultures. We report that 100% of the live TH-eGFP cells that were harvested and sequenced were dopaminergic neurons. These techniques will have widespread applications in neuroscience and molecular biology.

Parkinson's Disease (PD) is an incurable, age-related neurodegenerative disorder. The cause of this relatively common disorder remains poorly understood. There is widespread neuronal loss throughout the brain, with pronounced neuronal degeneration of dopaminergic neurons in the Substantia Nigra (SNc), leading to diagnostic clinical features of bradykinesia, rigidity and tremor.

We report representative RNA transcriptome data for single dopaminergic and GABAergic neurons isolated from midbrain cultures. This protocol can be used for neuroprotection, neurodegeneration, and pharmacological assays to study the effects of various treatments on the DA/GABA transcriptome. Because dopaminergic neurons represent a small minority of the neurons expressed in primary VM cultures, the ability to reliably identify these neurons in living cultures will enable an enhanced range of single-cell studies. These novel techniques will facilitate advances in understanding the mechanisms taking place at the cellular level and may have applications elsewhere in the fields of neuroscience and molecular biology.

NOTE: All experiments were conducted in accordance with the guidelines for care and use of animals provided by the National Institutes of Health, and protocols were approved by the Institutional Animal Care and Use Committee at the California Institute of Technology.

NOTE: An overview of the cell-harvesting and single-cell RNA-Sequencing protocol is given in Figure 1.

Here we report a protocol for culturing ventral midbrain neurons from a mouse expressing eGFP driven by a tyrosine hydroxylase promoter sequence, harvesting individual fluorescent neurons from the cultures, and measuring their RNA transcriptome using RNA-seq (Figure 1). The data showed that 100% of the TH-eGFP-positive cells that were harvested and sequenced were dopaminergic neurons, based on the presence of the following three DA-related gene transcripts, TH, dopa decarboxylase (DDC), and the dopamine transporter DAT (slc6a3). All of the TH-eGFP positive cells expressed these three genes as assessed by RNA-Seq. In each single-cell RNA-Seq library 6,000 - 8,000 protein coding genes were detected (Figure 2). The dopaminergic neurons robustly express dopamine-related transcripts in addition to several nicotinic acetylcholine receptor (nAChR) subunits (Table 1). We observed that not all of the cells that were negative for TH were GABAergic; therefore we defined cells as GABAergic based on the presence of the Gad1 transcript as assessed by RNA-seq. The cells that we defined as GABAergic neurons do not express dopamine-related transcripts but as mentioned do express a major gene for GABA synthesis, Gad1. The single-cell libraries also revealed long non-coding RNA, as well as transcripts encoding channels, receptors, nuclear proteins, histones, organellar proteins, and transcription factors.

Figure 1. RNA-Seq in Individual Neurons, as Performed in Our Experiments on Primary TH-eGFP Mouse Midbrain Cultures. (1) Culture TH-eGFP mouse ventral neurons for 3 weeks. (2) Identify fluorescent single neurons by exciting GFP using an Hg light source and FITC/GFP filter. (3) With the same 40X objective under phase optics, visualize single neurons and correctly position the pipette. (4 - 5) Aspirate the single cell into the glass micropipette. Images show a cell after harvesting: (4) Phase 40X; (5) eGFP fluorescence. (6) Lyse cells with lysis buffer with oligo-dT primer at 72 °C. (7) cDNA synthesis; 26 cycles amplification. (8) Transposon-mediated "tagmentation" of cDNA. (9) cDNA quality control check and multiplexed sequencing. (10) Subsequent computational analysis using Tophat, Cufflinks and Cuffdiff7. Relative abundance of expressed genes was measured in units of fragments per kilobase of transcript per million mapped reads (FPKM). The goal of RNA-seq is to provide a list of genes expressed in a cell and their relative abundance. Images (2 - 4) are from the current work, (6 - 10) are modified from a previous report1. Please click here to view a larger version of this figure. 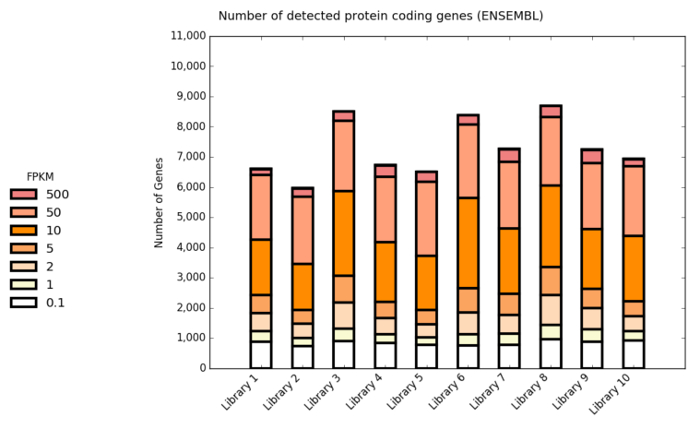 Figure 2. The Number of Protein Coding Genes Detected in the Single Dopaminergic RNA-Seq Libraries Generated from TH-eGFP-positive Cells. 6,000 - 8,000 protein genes were detected in the single cell libraries. FPKM: Fragments per kilobase of transcript per million mapped reads (FPKM). Please click here to view a larger version of this figure.

Table 1. Dopamine-related and nAChR Gene Transcripts in Dopaminergic and GABAergic Neurons at Day 21 in VentrMidbrain Cultures. RNA-Seq data for TH-eGFP positive and negative neurons are shown. Single cells were harvested on culture day 21. RNA-Seq data show that TH-eGFP positive neurons had high levels of DA-related gene transcripts, including tyrosine hydroxylase (TH), dopa decarboxylase (DDC), the dopamine transporter DAT (slc6a3), and nicotinic acetylcholine receptor (nAChR) subunits including α6, α4, β2 and β3. However, these cells had low levels of the GABAergic marker gene glutamic acid decarboxylase 1 (Gad1) and the serotonin 5-HT3 receptor A and B subunits (Htr3A and Htr3B). GABAergic neurons have low to no levels of DA-related gene transcripts, chrna6, chrnb3, and Htr3A/B, but have high levels of Gad1. RNA-Seq (Cuffdiff) data are shown for dopamine-related, GABAergic, nicotinic receptor, and serotonin transcripts. FPKM: Fragments per kilobase of transcript per million mapped reads (FPKM).

Because dopaminergic neurons represent a small minority of the neurons expressed in primary VM cultures, the ability to reliably identify these neurons in living cultures will enhance the range of available single-cell studies. This protocol can be used for neuroprotection, neurodegeneration, and pharmacological assays to study the effects of various treatments on the dopaminergic transcriptome. Additionally, one can use this protocol for immunohistochemical, electrophysiological, biophotonic11, and in principle, proteomic assays. These assays are especially useful for Parkinson's disease and addiction research. But of course analogous protocols, on GENSAT mice or similarly labeled mice, could be used for other disease states or for cells that are rare. Additionally, this protocol gives an emerging view of the heterogeneity within a given neuronal subtype.

In previous studies, after harvesting the single cell we placed it directly into PBS; however now we place the harvested single cell directly into the reaction buffer. This results in better quality RNA-Seq libraries as assessed by numbers of genes detected in each library. One of the main limitations of the technique is that fluorescently tagged cells are required. As stated earlier, there is no truly reliable way to identify a specific cell type in a mixed culture based on morphology. The large range of cell-specific fluorescent or Cre-expressing mouse lines now provides appropriately marked cells in many cases. However, care should be taken when selecting a suitable fluorescent mouse line, as an extensive study of transgenic mouse lines found that TH-Cre knock-in mouse lines exhibit pronounced transgene expression in nondopaminergic cells12.

RNA deep sequencing is a more powerful technique than microarrays. RNA-Seq gives good run-to-run reproducibility. The dynamic range detected is comparable to the actual transcript abundance within cells. One can detect alternative splice forms and novel isoforms. De novo analysis of samples without a reference gene is possible; and if a new reference gene is discovered the data can be re-analyzed for the specific gene(s) without having to run the wet-work experiment again13.

To summarize, we report that 100% of the live TH-eGFP cells that were harvested and sequenced were dopaminergic neurons. This technique extends other reports that identify acutely dissociated or long-term cultured dopaminergic neurons from GENSAT mice,14,15 and the technique will have widespread applications in neuroscience and molecular biology.

This work was supported by grants from the U.S. National Institutes of Health (DA017279, AG033954, DA037743), the Michael J. Fox Foundation, and the Caltech Innovation Initiative funding the Millard and Muriel Jacobs Genetics and Genomics Laboratory at the California Institute of Technology. We thank Brian Williams for optimising the RNA-Seq library protocol and for providing assistance. We thank Henry Amrhein for computational training. We thank Barbara J. Wold for the use of her equipment and laboratory space. We thank Igor Antoshechkin for library sequencing, and for facility management. 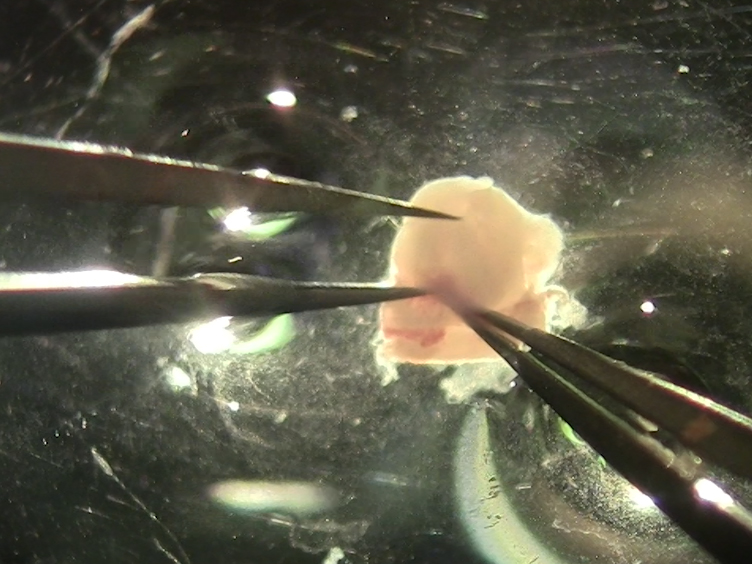