We present a protocol for manipulation of individual vortices in thin superconducting films, using local mechanical contact. The method does not include applying current, magnetic field or additional fabrication steps.

Local, deterministic manipulation of individual vortices in type 2 superconductors is challenging. The ability to control the position of individual vortices is necessary in order to study how vortices interact with each other, with the lattice, and with other magnetic objects. Here, we present a protocol for vortex manipulation in thin superconducting films by local contact, without applying current or magnetic field. Vortices are imaged using a scanning superconducting quantum interference device (SQUID), and vertical stress is applied to the sample by pushing the tip of a silicon chip into the sample, using a piezoelectric element. Vortices are moved by tapping the sample or sweeping it with the silicon tip. Our method allows for effective manipulation of individual vortices, without damaging the film or affecting its topography. We demonstrate how vortices were relocated to distances of up to 0.8 mm. The vortices remained stable at their new location up to five days. With this method, we can control vortices and move them to form complex configurations. This technique for vortex manipulation could also be implemented in applications such as vortex based logic devices.

Vortices are magnetic objects at the nanoscale, formed in type 2 superconductors in the presence of external magnetic field. In a defect free sample, vortices can move freely. However, different defects in the material result in regions of reduced superconductivity which are energetically favorable for vortices. Vortices tend to decorate these regions, also known as the pinning sites. In this case, the force required to move a vortex must be greater than the pinning force. Properties of vortices, such as vortex density, interaction strength and range, can be easily determined by external field, temperature, or geometry of the sample. The ability to control these properties makes them a good model system for condensed matter behavior that can be easily tuned, as well as suitable candidates for electronic applications1,2. Control of the location of individual vortices is essential for the design of such logical elements.

Mechanical control of magnetic nanoparticles had been achieved before. Kalisky et al. recently used scanning superconducting quantum interference device (SQUID) to study the influence of local mechanical stress on ferromagnetic patches in complex oxide interfaces3. They were able to change the orientation of the patch by scanning in contact, pressing the tip of the SQUID into the sample, applying a force of up to 1 µN in the process. We have used a similar method in our protocol in order to move vortices.

In existing studies of vortex manipulation, motion was achieved by applying current to the sample, thus creating Lorentz force4,5,6. While this method is effective, it is not local, and in order to control a single vortex, additional fabrication is required. Vortices can also be manipulated by applying external magnetic field, for example with a magnetic force microscope (MFM) or with a SQUID field coil7,8. This method is effective and local, but the force applied by these tools is small, and can overcome the pinning force only at high temperatures, close to the critical temperature of the superconductor. Our protocol allows effective, local manipulation at low temperatures (4 K) without additional fabrication of the sample.

We image vortices using scanning SQUID microscopy. The sensor is fabricated on a silicon chip which is polished into a corner, and glued on a flexible cantilever. The cantilever is used for capacitive sensing of the surface. The chip is placed at an angle to the sample, so that the contact point is at the tip of the chip. We apply forces of up to 2 µN by pushing the chip into the sample. We move the sample relative to the SQUID by piezo elements. We move the vortex by tapping the silicon tip next to a vortex, or by sweeping it, touching the vortex.

Our protocol was successfully tested on thousands of individual, well separated vortices in two samples of Nb, and nine samples of NbN. We generate new vortices on the same sample by heating the sample above Tc, and cooling it back to 4.2 K in the presence of a magnetic field. We chose the external magnetic field to achieve the desired vortex density. We show here data from these experiments. These results have been described in detail by Kremen et al.11.

The protocol described here allows for controllable manipulation of vortices into various configurations (Figure 2). Single vortices were moved over distances up to 1 mm (Figure 3), and remained stable at their new locations. 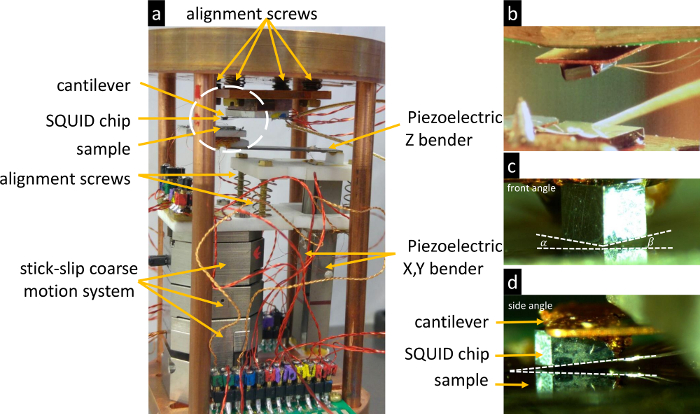 Figure 1. Scanning SQUID system. (a) The scanning head. (b) Enlarged photo of the area circled in (a). (c) Sample-sensor front angle. The angles α and β between the chip and its reflection from the sample should be equal on both sides. (d) The chosen alignment angle between the sensor and the sample. The angle between the chip and the reflection is twice the desired angle, which should be at least 4°. Please click here to view a larger version of this figure. 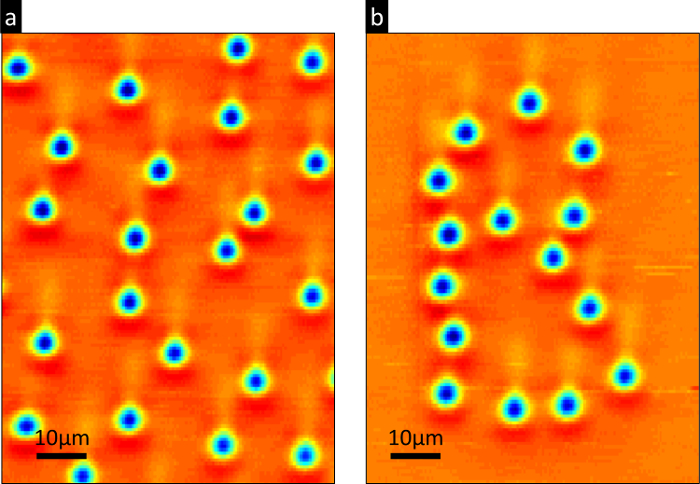 Figure 3. Several manipulations of a single vortex, dragging it over a distance of 820 µm. Inset: (a) A single vortex. The keyhole shape is due to convolution between the magnetic signal and the sensor's point spread function. (b) A scan in contact with the SQUID turned on. The initial location of the vortex is at the left of the picture. The peak of the signal moves to the right with the vortex, until the vortex is relocated at the right end and no longer moves. (c) A sketch of a scan in contact. The tip of the sensor is the first to make contact with the sample, while the vortex location received from the scan is relative to the pickup loop, which is offset from the tip. Please click here to view a larger version of this figure.

Successful manipulation of vortices depends on several critical steps. It is important to align the sensor at an angle, such that the tip of the chip will be the first to make contact with the sample. Second, it is important to note that the force exerted on the sample is determined by the mechanical properties of the cantilever that the chip is mounted on. In the elastic regime, the force applied is proportional to the deflection, x, according to Hooke's law:
F = -kx

Where k is the spring constant, determined by Young's modulus of the material, and its physical dimensions, and is given by
k = Et3w/4l3

Here, E is Young’s modulus, t is the thickness of the beam, w is the width and l is the length. For a copper cantilever, E=117 GPa. Our cantilever was 0.017 mm thick, 3 mm wide and 10.7 mm long, which give k=0.35 N/m. When the voltage in the Z piezo was 1 V below touchdown, the deflection was 1.6 µm. This gives a force of 0.56 µN. It is important to choose the cantilever material and dimensions properly, to get the desired force.

It is also important to note that the location of the vortex as scanned by the SQUID is relative to the pickup loop, and that the contact point is displaced from the pickup loop according to the size of the chip and the polishing. This displacement is to be accounted for when choosing the location of the tap event, or the contact scan, to insure that the tip of the chip makes contact near the vortex location.

If a vortex was not displaced after scanning in contact, applying more stress by pushing the tip harder into the sample, pressing the sample for a longer period or dragging the tip more slowly across the sample may help overcome the pinning force and dislocate the vortex.

The sample did not show memory of the manipulation; we observed no change in the diamagnetism of the sample, corresponding to the superfluid density, as well as no change to the topography of the sample. New vortex configurations created after reheating and cooling in the presence of magnetic field did not show memory of previous manipulations either11.

Our method is limited by the size of the contact point. The technique has the potential for fine tuning the location of vortices, but so far we have demonstrated the abilities of the protocol for rather large, polished tips of the chip (from 100 nm up to 1 µm). Characterization of the tip is needed in order to know the strain gradients.

In conclusion, our protocol allows for manipulation of individual vortices in superconducting thin films at low temperatures and without further fabrication of the sample. Mastering the ability to control the location of vortices may have applications in the design of flux based logic gates, as well as in the study of interactions of vortices with other vortices, the lattice, and other magnetic particles. 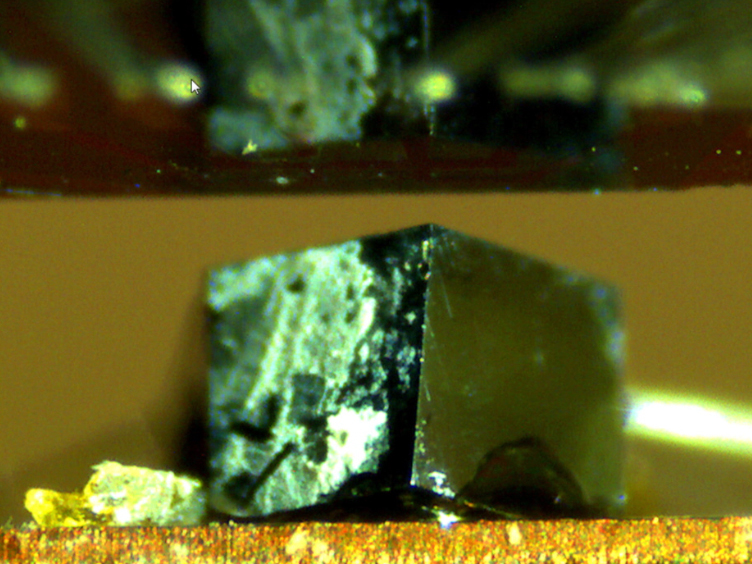