We developed a horizontal slice preparation of the adult mammalian retina with the plane of sectioning parallel to the retinal surface. Dendritic fields of nonradially oriented retinal neurons were not truncated, allowing the study of signal processing with patch-clamp and imaging techniques.

Vertical slice preparations are well established to study circuitry and signal transmission in the adult mammalian retina. The plane of sectioning in these preparations is perpendicular to the retinal surface, making it ideal for the study of radially oriented neurons like photoreceptors and bipolar cells. However, the large dendritic arbors of horizontal cells, wide-field amacrine cells, and ganglion cells are mostly truncated, leaving markedly reduced synaptic activity in these cells. Whereas ganglion cells and displaced amacrine cells can be studied in a whole-mounted preparation of the retina, horizontal cells and amacrine cells located in the inner nuclear layer are only poorly accessible for electrodes in whole retina tissue.

Horizontal cells from horizontal slices exhibited tonic synaptic activity in the dark, and they responded to brief flashes of light with a reduction of inward current and diminished synaptic activity. Immunocytochemical evidence indicates that almost all cones within the dendritic field of a horizontal cell establish synapses with its peripheral dendrites. The horizontal slice preparation is therefore well suited to study the physiological properties of horizontally extended retinal neurons as well as sensory signal transmission and integration across selected synapses.

Visual information is coded as a dynamic spatio-temporal pattern of photoreceptor activation, and the ribbon synapse between photoreceptors and second-order neurons determines the downstream transfer of visual information. The vertical slice preparation of the mammalian retina is a highly valuable tool to study signal processing in vertical pathways, i.e. between photoreceptors and bipolar cells, and between bipolar cells and some types of amacrine cell1,2,3,4.

However, vertical sectioning always causes severe truncation of the dendritic fields of many retinal neurons, leading to considerable loss of synaptic contacts. Especially in the outer retina, horizontal cells are affected due to their laterally spread extended dendritic fields and axon terminal systems5. In a vertical slice preparation, the synaptic input of hundreds of cone photoreceptor terminals to the dendrites of a horizontal cell is thus reduced to a few sparse contacts. This might suffice to study the properties of individual synapses, but it does by no means represent the signal processing capabilities underlying the synchronized activation of photoreceptor ribbon synapses.

All procedures were carried out in accordance with the guidelines for animal experiments issued by the Federal Republic of Germany.

1. Preparation of Media and Other Chemicals

2. Setting up the Vibratome

NOTE: All sectioning has been carried out with the vibratome listed in the Materials Table. The given settings refer to this type of vibratome only. For further details on vibratome sectioning of neural tissue please refer to reference7.

4. Embedding of Retinal Pieces in Agarose

To prove that the contacts between cones and horizontal cells were functional, patch-clamp recordings were carried out from horizontal cell bodies. Under dark-adapted conditions, current responses were characterized by a large inward current accompanied by moderate to high-frequency synaptic activity (Figure 2A). The deviation from baseline and the excitatory postsynaptic currents were caused by the constant release of glutamate in the dark, activating postsynaptic AMPA- and kainate-type glutamate receptors9. Individual synaptic events were characterized by a monophasic waveform or more complex current trajectories (Figure 2B). The presence of tonic postsynaptic activity suggests that glutamate was released at the synaptic contacts between cone photoreceptors and horizontal cell dendrites shown in Figure 1C.

Horizontal cells recorded responded to changes in light intensity, indicating that the signal transduction cascade in cone photoreceptors was also intact and functional in a horizontal slice preparation. Due to the reduction of transmitter release, the tonic inward current of dark-adapted horizontal cells was inhibited, and synaptic activity appeared clearly diminished during the presence of a full-field light stimulus (1,300 W/cm2, 470 40 nm) (Figure 3A). Likewise, a switch to darkness from a light-adapted state caused an inward current and increased synaptic activity (Figure 3B). In addition, brief electrical pulses (1-15 V, 1 msec) were applied through a platinum-iridium bipolar stimulation electrode to depolarize all cone photoreceptors in the vicinity of a horizontal cell body. The stimulation-induced release of glutamate evoked large amplitude excitatory postsynaptic currents in the recorded horizontal cell (Figure 3C). In summary, these findings show convincingly that the synapse between cone photoreceptors and horizontal cells can be manipulated experimentally by either the endogenous stimulus light or by controlled depolarization of presynaptic elements. 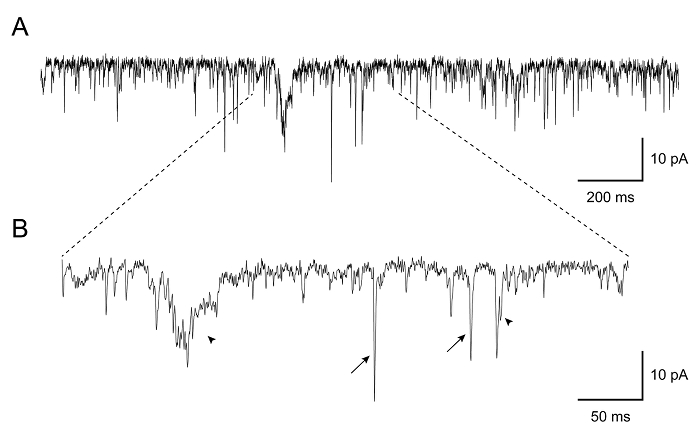 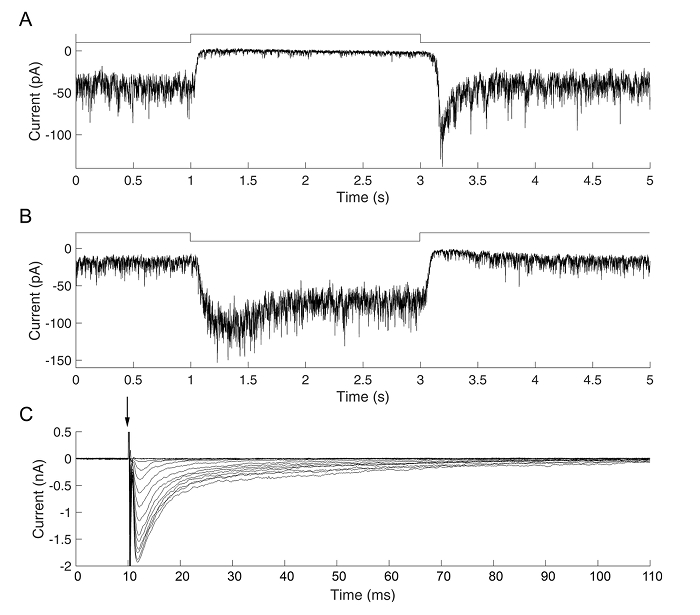 Figure 3: Current Responses of Horizontal Cell Bodies Evoked by Light and Electrical Stimulation. Light response of a dark-adapted horizontal cell body recorded at -60 mV holding potential. Full-field illumination inhibits the tonic inward current and reduces synaptic activity (A). A light-adapted horizontal cell body recorded under the same conditions displays an inward current following a dark flash accompanied by increased synaptic activity during darkness (B). Horizontal lines in A and B represent the timing of the stimulus. Extracellular stimulation by brief electrical pulses induces large-amplitude excitatory postsynaptic currents due to the synchronized release of glutamate from cone photoreceptors (C). Holding potential: -60 mV. The arrow indicates the timing of the stimulation pulse. Truncated currents at the beginning of the trace represent stimulation artefacts. Please click here to view a larger version of this figure.

In contrast to vertical slices, the dendritic morphology of radially oriented neurons like horizontal cells and amacrine cells is well preserved. Compared to whole retina preparations, these cell types are easily accessible for microelectrodes and can be studied by both electrophysiological and imaging techniques. Here, we focused on the outer retina; however, a similar approach has been reported especially for amacrine cells of the inner retina10.

The properties of the horizontal slice preparation have several implications for functional studies. The number of synaptic contacts between cone photoreceptors and postsynaptic horizontal cells was nearly indistinguishable from the intact retina. Synaptic contacts were functional, showing tonic release of neurotransmitter in the dark. The synapse could be activated by either endogenous stimuli like light/dark transitions or by external bipolar stimulation.

One critical step of the technique is the isolation of the retina itself, which should be carried out as fast as possible without damaging the tissue. In addition, the presence of remnants of the vitreous body negatively affects the quality of the slices. Another critical step is the correct positioning of the retinal pieces. Although utmost care is taken to locate the retinal pieces parallel to the bottom of the glass dish, the plane of sectioning might still run slightly tangentially through the retina. Depending on the angle, the dendritic field of radially oriented neurons will be more or less truncated.

The technique presented here is mostly limited to horizontally oriented neurons. Therefore, it is not possible to record from photoreceptors and intact bipolar cells in a horizontal slice, since the bipolar cell axons will be truncated. In addition, it is impossible to perfectly control the level of sectioning. A single retinal piece might thus be cut at an undesired level, for instance between outer and inner segments of photoreceptors. Increasing the number of retinal pieces within one block of agarose increases chances of a correct plane of sectioning at least in one piece.

The horizontal slice preparation is well suited to studying the unique properties of ribbon synapses of rod and cone photoreceptors. So far, we have used an animal knock-out system to investigate the role of presynaptic proteins complexin 3 and complexin 4 on synaptic transmission between cone photoreceptors and horizontal cells11. It is also possible to study the properties of postsynaptic neurotransmitter receptors, as shown previously9.

Future applications will include the study of synaptic proteins based on transgenic mouse lines with electrophysiological and imaging techniques. It will also be possible to investigate the biophysical properties of gap junctions between horizontal cells. Since light responses can be measured, the technique will also be used to investigate the encoding of endogenous stimuli at the first synapse of the visual system. It is possible to carry out the preparation in darkness to prevent light adaptation of the tissue, otherwise the light responses will be largely cone-driven.

In summary, the horizontal slice preparation represents a novel approach to increase the accessibility of individual synapses as a prerequisite to studying their functional properties in the mammalian retina12.

This work was supported by the Deutsche Forschungsgemeinschaft DFG FOR701 and FE464/11-1 to A.F. The authors want to acknowledge the excellent technical assistance of Andrea Nerz. 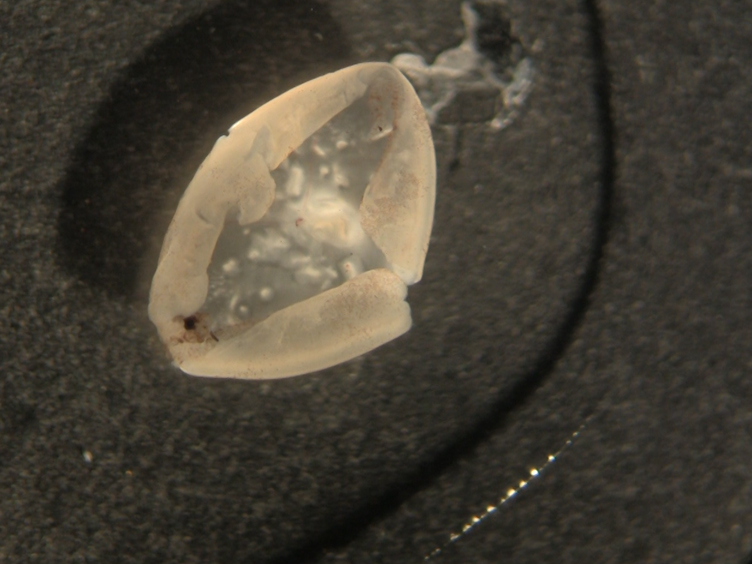