Here, we present a protocol for hydraulic extrusion of the spinal cord as well as identification and isolation of specific dorsal root ganglia (DRGs) in the same rodent. Compared to standard spinal cord isolation methods, this method is significantly faster and reduces the risk of tissue damage.

Traditionally, the spinal cord is isolated by laminectomy, i.e. by breaking open the spinal vertebrae one at a time. This is both time consuming and may result in damage to the spinal cord caused by the dissection process. Here, we show how the spinal cord can be extruded using hydraulic pressure. Handling time is significantly reduced to only a few minutes, likely decreasing protein damage. The low risk of damage to the spinal cord tissue improves subsequent immunohistochemical analysis. By performing hydraulic spinal cord extrusion instead of traditional laminectomy, the rodents can further be used for DRG isolation, thereby lowering the number of animals and allowing analysis across tissues from the same rodent. We demonstrate a consistent method to identify and isolate the DRGs according to their localization relative to the costae. It is, however, important to adjust this method to the particular animal used, as the number of spinal cord segments, both thoracic and lumbar, may vary according to animal type and strain. In addition, we illustrate further processing examples of the isolated tissues.

The overall goal of this method is to isolate the spinal cord as well as to identify and isolate DRGs1,2. Hydraulic extrusion of the spinal cord is a significantly faster method than the traditional way of spinal cord isolation by laminectomy, i.e. by breaking the spinal vertebrae one at a time, and this method reduces the risk of tissue damage caused by the dissection process3,4. DRGs may be difficult to identify. Correct identification is highly important for tissue analysis, e.g. following sciatic nerve injury. By numbering the DRGs according to their localization relative to the costae, DRGs can be identified consistently.

Tissue isolated by the techniques demonstrated here can be applied to a broad range of analyses including Western blotting5,6, qPCR7 and immunohistochemical staining8.

When identifying DRGs, it is important to take into account that the number of spinal cord segments is known to vary with animal type and strain9,10,11. The advantages in performing this method in mice are the high number of genetically modified variants available and the relatively low housing expenses. The advantages in using rats are the relatively high tissue yield and if involving nerve injuries, the procedure will be eased with size.

All animals were handled in full compliance with Danish and European regulations. Permission number: 2012-15-2934.

1. Preparation of the Syringe for Hydraulic Extrusion of the Spinal Cord

3. Isolation of the Spinal Column

4. Hydraulic Extrusion of the Spinal Cord 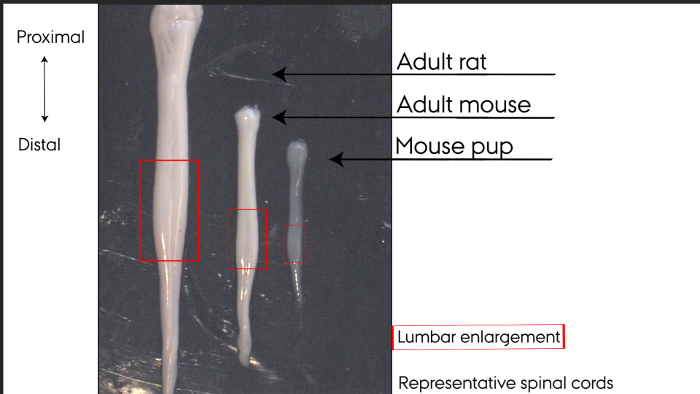 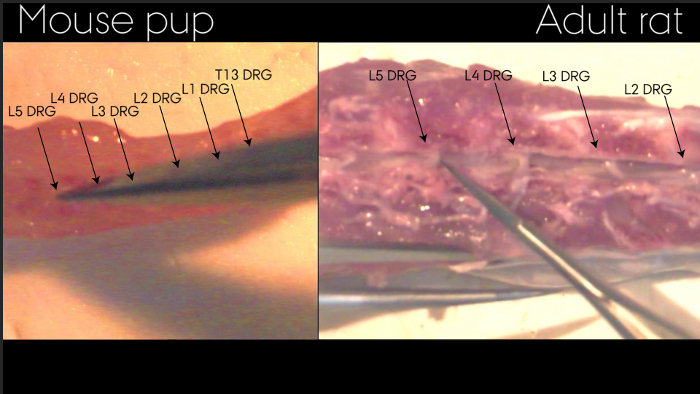 Figure 2: Identification of DRGs in spinal column after extrusion of spinal cord. The spinal column has been split allowing visualization of DRGs as indicated by arrows. Exemplified by adult rat and mouse pup. Please click here to view a larger version of this figure. 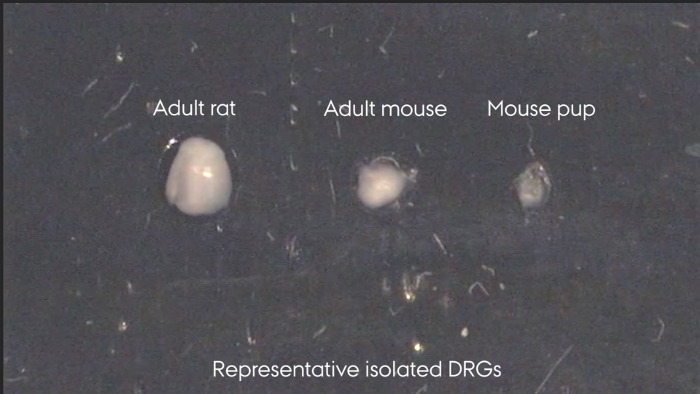 7. Processing of Tissues for Further Analysis

Individual DRGs can only be identified while located in the spinal column, Figure 2. Following isolation, Figure 3, the individual DRGs cannot be identified by appearance. If needed, it is therefore important to keep them clearly separated upon isolation. After isolation, the spinal cord and DRGs can be processed and stained as outlined in step 7.3 and represented in Figure 4. Figure 4a shows an immunohistochemical staining of a DRG section where the neurons and their surrounding satellite glial cells are clearly visible. By correct identification of the DRG it is possible to analyze the effect of sciatic nerve injuries on the soma of the injured neuron as well as on their surrounding satellite glial cells. Figure 4b shows a Nissl staining of a hydraulically extruded spinal cord where the tissue is intact as reflected by the smooth edges of the section. 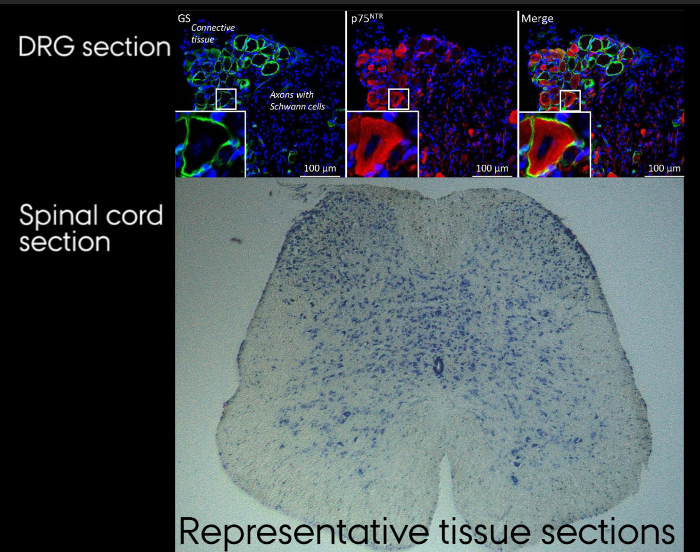 The protocol is applicable to rodents of all ages and is here exemplified by an adult mouse (8 weeks), a mouse pup (5 days) and an adult rat (10 weeks). Depending on animal type and strain, the number of thoracic and lumbar sections may vary9,10,11. Depending on the proteins to be analyzed, adult rodents may be perfused with enzyme-inhibiting solutions prior to euthanasia. If performing an experiment involving one-sided nerve injury, the spinal cord can be split into ipsilateral and contralateral sides using ultra-fine tweezers immediately after extrusion. Further, each side can be split into dorsal and ventral sides. The tissue can then be processed for further analyses, e.g. Western blotting.

Hydraulic extrusion of the spinal cord and DRG isolation could also be performed using oxygenated artificial cerebrospinal fluid (ACSF) instead of ice-cold PBS. The use of ACSF allows preservation of the isolated tissue in a better physiological environment, which is particularly important in case of subsequent electrophysiological recordings12,13. An alternative to ACSF could be PBS containing 1 g/L glucose for generation of primary DRG cultures14.

Consistent identification of DRGs may be difficult. However, this is essential for tissue analysis, e.g. following sciatic nerve injury. By numbering the DRGs according to their localization relative to the costae, DRGs can be identified consistently. Staining of spinal cord tissue as well as of DRGs may be optimized by performing the illustrated tissue treatment variations outlined in protocol step 7.

We would like to acknowledge David Kiel, Aarhus University, for filming and editing. VirtualDub software was used for processing of microscope video sequences. We thank the Danish Research Institute of Translational Neuroscience - DANDRITE, Nordic EMBL Partnership, for access to equipment and the Aarhus University Research Foundation, EU 7FP project PAINCAGE, Det Frie Forskningsrad (DFF) and The Lundbeck Foundation for funding. 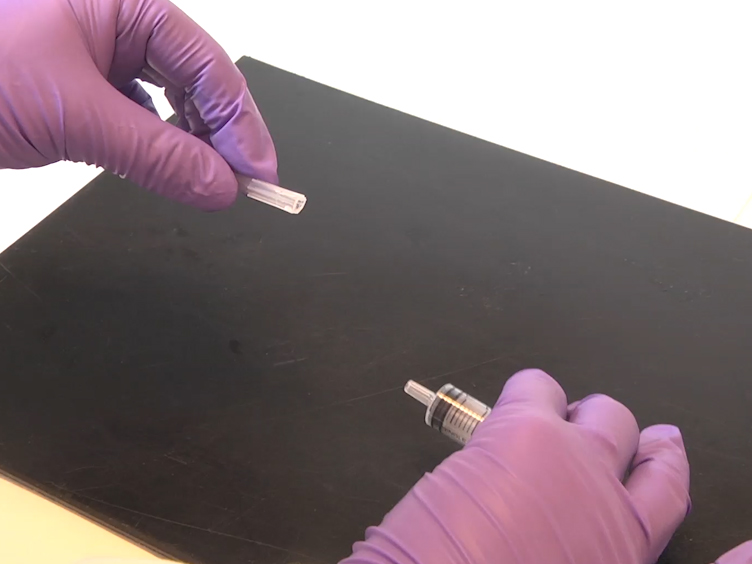