High-intensity MRI guided focused ultrasound is an emerging noninvasive technique to precisely ablate brain tissue. It has been shown to be safe and effective in treating medically-refractory essential tremor. This article describes the protocol for thalamotomy from patient selection to equipment setup to post-treatment follow-up.

Essential tremor (ET) is the most common type of tremor in adults. While ET does not result in decreased life expectancy, the disabilities associated with ET can have a significant impact on quality of life, mood, functional activities, and socialization. Patients suffering from ET not sufficiently treated with first line medications may be eligible for alternative strategies such as deep brain stimulation, radiofrequency ablation, and MRI guided focused ultrasound (MRgFUS). High-intensity MRgFUS is an emerging modality to treat ET, its attraction for patients being that it is noninvasive and associated with short recovery time, as patients are home the day after treatment. While MRgFUS centers are still limited, it will become important for clinicians to consider MRgFUS as a treatment alternative, particularly in the case of a patient for whom open surgery is contraindicated. This article outlines the steps of patient selection, equipment setup, sonication, and post-treatment follow-up, as well as critical steps to be aware of when performing a MRgFUS procedure.

Essential tremor (ET) is the most common movement disorder, with a prevalence of up to 4% among individuals 40 year of age or older1. It is characterized by a postural and intention tremor at a frequency of approximately 4 - 7 Hz. It typically affects the upper extremities as well as the head and voice but can also be seen in the legs. ET can be severely debilitating, affecting the ability to manage simple activities of daily living. 15 - 25% of patients are forced to retire prematurely as a result of ET, and 60% of patients do not apply for jobs or promotions due to uncontrollable shaking2. Despite the effectiveness of first line medical therapies, such as propranolol or primidone3, a significant proportion of patients cannot tolerate or are resistant to medical treatments. Patients who remain symptomatic and significantly disabled after trying at least two medications, or who develop intolerable side effects, are considered medication-refractory.

Medically-refractory cases of ET are eligible for surgical interventions. Targeting of the ventralis intermedius (Vim) nucleus of the thalamus, a key cerebello-motor relay structure, with deep brain stimulation (DBS)4 electrodes or radiofrequency ablation can help alleviate tremors5,6. However, both are open neurosurgical procedures, with potential complications including infection and hemorrhage. DBS further involves chronic implantation of an intracranial electrode and battery over the pectoralis major. Furthermore, patients require anesthetics, and in the case of DBS a general anesthetic, as well as hospital stays ranging from one to several days.

MR-guided Focused ultrasound (MRgFUS) is an emerging noninvasive technique to treat various neurologic and psychiatric disorders. The device consists of a helmet that focuses over 1000 ultrasound beams from independent transducers through the intact skull. High-intensity MRgFUS can generate heat at the target leading to coagulative necrosis. A multi-centered randomized sham-controlled trial of thalamotomy for essential tremor demonstrated 47% improvement in tremor score that was durable at 12 months7. This result has led to regulatory approval of MRgFUS as a treatment modality and the subsequent addition of MRgFUS to the clinician's armamentarium for tremor management. This protocol details the steps of patient selection, preparation, and sonication, as well as the important elements of patient follow-up.

All human experiments were approved by the Institutional Research Ethics Board at Sunnybrook Health Sciences Centre.

4. Target Selection of the Vim nucleus of the thalamus

Long-term reduction in tremor in the treated extremity is on average 50% at 3 months and 40% at 12 months. Treatment success can be immediately evaluated after sonication through radiologic findings of a lesion at the Vim (Figure 1) and performance on clinical measures such as the hand-drawn spiral test (Figure 2). Additionally, intraoperative MR thermography provides real-time feedback to the target temperature. A permanent lesion is expected when the temperature reaches 55 - 60 °C.

A patient should be assessed for adverse events radiologically and clinically. MRI should reveal any edema, hemorrhage, and mal-placement of the lesion. While edema is usually seen with the lesion, it is typically asymptomatic for the patient and does not warrant any clinical intervention. The pin sites should be examined for infection and scalp for any post-treatment lesions. Soft tissue infection at the pin sites (e.g., redness, tenderness, and swelling) can be treated with a short course of oral antibiotics. If a careful neurological exam reveals any new neurologic deficits, such as weakness, sensory problems, and ataxia, the patient should be assessed and treated by the appropriate physician. 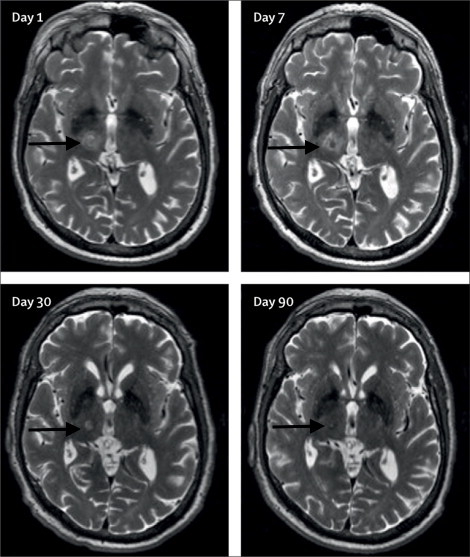 Figure 1: Axial T2-weighted 3T-MRI. Images of the right unilateral thalamotomy for a patient with medically-refractory essential tremor at days 1, 7, 30, and 90 after treatment. Black arrows are pointing to the Vim. This figure has been modified from reference6. 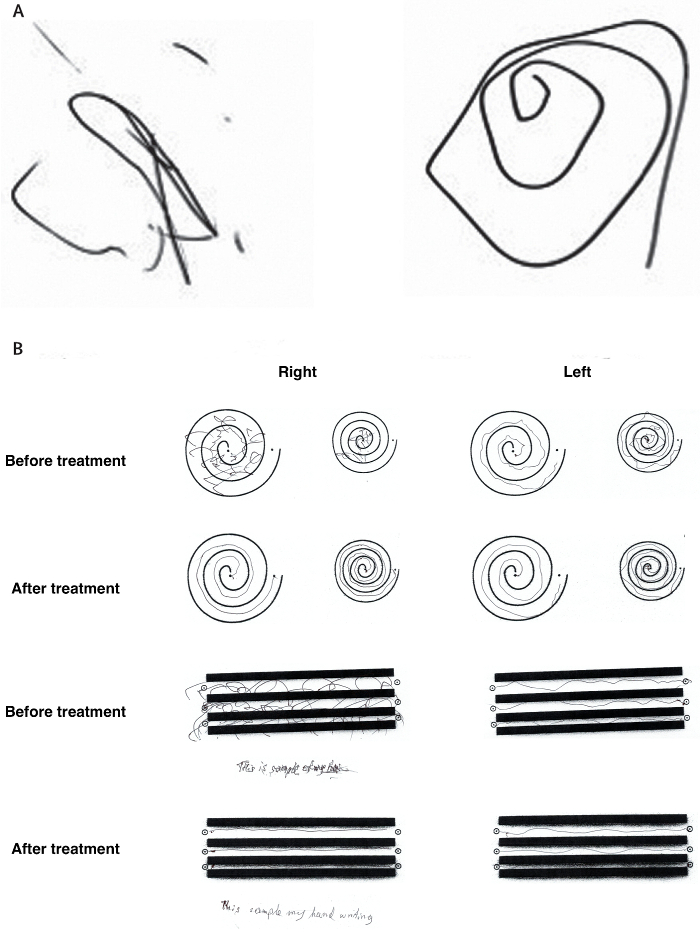 Figure 2: Representative clinical improvement on spiral drawing test. (A) The Archimedean spiral is a clinical tool used to measure severity of essential tremor. The spiral also provides information about the tremor orientation axis. Freehand spiral drawings of a patient immediately before (left) and immediately after (right) thalamotomy demonstrate dramatic improvement. (B) During the clinical rating scale for tremor (CRST), the patient is asked to complete several line drawings. The drawings of the patient before treatment and 3 months after treatment again demonstrate significant improvement. This figure has been modified from reference6. Please click here to view a larger version of this figure.

MRgFUS at high-intensity can noninvasively create an intracranial lesion. Current high-intensity MRgFUS with continuous wave mode at 650 kHz has been optimized for thermal ablation of deep brain structures, such as the Vim thalamus. The use of MRgFUS has some advantages over existing techniques such as DBS, gamma knife radiosurgery, or radiofrequency ablation for treatment-refractory ET. DBS is an open surgical procedure that can be associated with potential device-related complications, including hardware malfunctions, breakage, and battery depletion. RF ablation is also an open procedure, and associated with trans-cortical passage of brain electrodes. Although gamma knife is a non-invasive alternative, the effects of gamma knife thalamotomy are variable and delayed, often requiring weeks to months to become noticeable10. The coupling of MRI thermography and FUS enables surgeons to monitor lesion location, temperature, and size in real time, thereby reducing the risk of adverse events due to misplacement of lesions.

However, MRgFUS is not without risk. Heat injury to surrounding tissue, with associated pain or neurologic injury, can occur if lesions are too superficial, close to the skull, or adjacent to eloquent regions. Technological advances in imaging software, such as the integration of fiber tracking technology11, will allow for easier positioning and target localisation of the Vim thalamus, thereby possibly decreasing the duration of the procedure and the occurrence of adverse effects. Furthermore, several patient factors are important to consider to maximize the efficiency of the MRgFUS treatment. Skull density, thickness, and shape are critical elements correlated to the amount of acoustic energy needed for successful ablation. From the acoustic perspective, thin and large skulls are in general easier to treat. For thick and dense skulls, particularly if the skull volume is also small, higher energies are required resulting in greater skull heating for patients. Skull and scalp heating can be a source of discomfort and may lead to long-term sequelae. Circulating cool water at low temperatures (10 - 15 °C) between sonications is helpful to minimize heating.

During the sonication process, adjusting the target location based on patient response is key. To avoid permanent sensory deficits if patients report transient sensory symptoms, we typically move our target 1 mm anterior, away from the sensory relay and re-sonicate to check for both adverse events and clinical response. The treatment team must be keenly aware of the anatomy surrounding the Vim, such as its adjacency to the internal capsule on the lateral, inferior dimension. For instance, edema may extend to white matter internal capsule if the size of the lesion is large or the shape is oblique. Therefore, a particularly lateral target warrants extra caution.

High-intensity MRgFUS is an effective option for essential tremor, and is currently being investigated in other disorders, such as OCD and Parkinson's Disease, where a focal lesion may be beneficial to treat medically refractory symptoms. The results of these trials will help determine what role, if any, MRgFUS might play in the management of these disorders, as a less invasive surgical intervention for pathologic brain circuits.

KH is an inventor on patents and patent applications related to neuroablation with focused ultrasound. NL and KH have served as paid consultants for Focused Ultrasound Foundation (FUSF). FUSF is an independent, non-profit organization whose objective is the advancement of research in focused ultrasound technology and its applications. YM, YH, BS, MLS, and NS have no conflicts to declare.

We have no source of funding for this article to acknowledge. 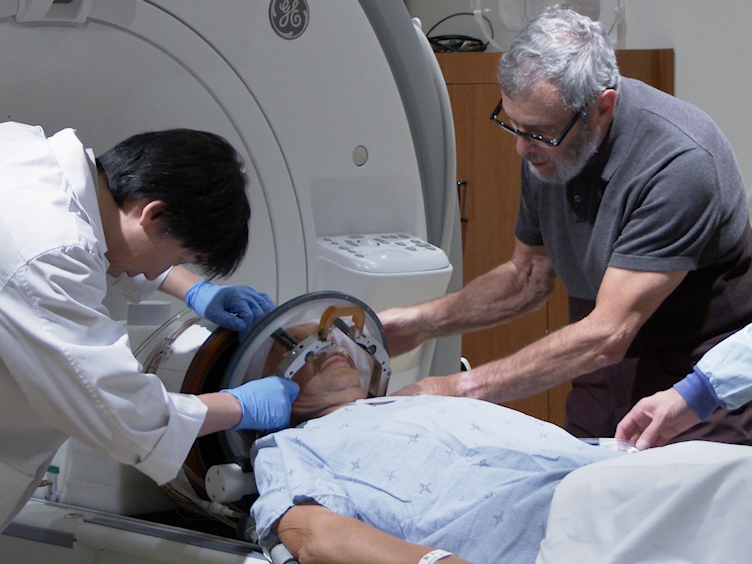