This protocol describes using cultured Aorta-Gonad-Mesonephros for expression analyses, colony-forming units in the culture and spleen, and long-term reconstitution to determine the effect of regulatory factors and signaling pathways on hematopoietic stem cell development. This has been demonstrated as an effective system for studying hematopoietic stem cell biology and function.

The limitation of using mouse embryos for hematopoiesis studies is the added inconvenience in operations, which is largely due to the intrauterine development of the embryo. Although genetic data from knockout (KO) mice are convincing, it is not realistic to generate KO mice for all genes as needed. In addition, performing in vivo rescue experiments to consolidate the data obtained from KO mice is not convenient. To overcome these limitations, the Aorta-Gonad-Mesonephros (AGM) explant culture was developed as an appropriate system to study hematopoietic stem cell (HSC) development. Especially for rescue experiments, it can be used to recover the impaired hematopoiesis in KO mice. By adding the appropriate chemicals into the medium, the impaired signaling can be reactivated or up-regulated pathways can be inhibited. With the use of this method, many experiments can be performed to identify the critical regulators of HSC development, including HSC related gene expression at mRNA and protein levels, colony formation ability, and reconstitution capacity. This series of experiments would be helpful in defining the underlying mechanisms essential for HSC development in mammals.

Hematopoietic stem cells (HSCs) are tissue-specific adult stem cells that possess multilineage potential including erythroid, myeloid, and lymphoid cells as well as the ability to self-renew. Recent studies have shown that the earliest HSCs arose from a specialized endothelial population, known as hemogenic endothelium (HE), through the endothelial to hematopoietic transition (EHT) at the ventral wall of dorsal aorta1,2,3,4. Once formed in the aorta-gonad-mesonephros (AGM) region from embryonic (E) 10.5 to E12.5 in the mouse embryo, HSCs will migrate into the fetal liver for expansion and finally colonize the bone marrow to maintain adult hematopoiesis throughout an individual's life5,6. Although this has been studied for many years, the underlying mechanisms of HSC emergence and development remain incompletely understood.

Unlike in vitro fertilization and development of zebrafish embryos, intrauterine development of mouse embryos makes the study of definitive hematopoiesis during embryogenesis much more inconvenient. Although genetic experiments using knockout (KO) mice are commonly utilized, the lack of certain KO mice also limits their use in the hematopoietic research field. In addition, in vivo rescue experiments are not easily performed in KO mice. Since 1996, the AGM explant culture has been developed for hematopoietic studies by the pioneers in the field7. With the help of this culture system, ventral tissues of the AGM region have been identified to promote HSC activity, while dorsal tissues exert an opposite effect8,9. The AGM explant culture system has also been applied to determine the roles of Serotonin, Mpl, SCF, BMP, and Hedgehog signaling in HSC development10,11,12,13,14. Importantly, it is also a popular method used to rescue hematopoietic defects in mutant embryos13,15.

All the procedures including animal subjects have been approved by the Ethical Review Committee in the Institute of Zoology, Chinese Academy of Sciences, Beijing, China.

A recent publication reported endothelial cell-derived serotonin promotes the survival of HSCs by inhibiting the pro-apoptotic pathway in the AGM13. To confirm the promoting effect of serotonin on HSC development, Fluoxetine was included. As a selective serotonin re-uptake inhibitor (SSRI), Fluoxetine has been demonstrated to inhibit serotonin re-absorption in peripheral tissues16,17,18. Using the AGM explant culture system, the effect of Fluoxetine on HSC development was examined by following the procedure presented above. The expression analyses showed increased expression of Runx1, which is defined as a pivotal gene for HSC development19, in Fluoxetine-treated AGMs at mRNA and protein levels, respectively (Figure 2A and 2B). Fluoxetine can also significantly increase the colony formation ability of HSCs in the AGM, including BFU-E, CFU-GM, and CFU-GEMM (Figure 2C and Figure 2D). In addition, in vivo transplantation results showed that HSCs in the AGM treated with Fluoxetine can increase the number of spleen colonies in irradiated adult recipients (Figure 2E). 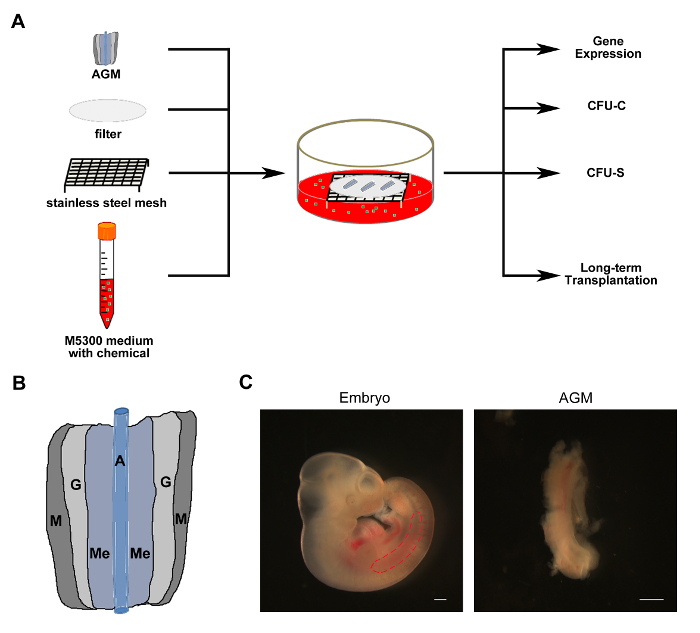 Figure 1. Schematic representation of AGM structure and explant culture system.
(A) The flow chart for using the AGM explant culture systemto examine the effect of chemicals on HSCs development. Briefly, AGMs are dissected from embryos and cultured on filters at the air-liquid interface with chemicals diluted in M5300 long-term culture medium. 2 - 3 days later, the cultured AGMs are collected and used to examine the expression of hematopoietic related genes, colony formation ability, and repopulation capacity. AGM, aorta-gonad-mesonephros; CFU-C, colony-forming units in the culture; CFU-S, colony-forming units-spleen. (B) The structure of AGM is shown in this diagram. A, dorsal aorta; Me, mesenchyme; G, gonad; M, mesonephros. (C) The morphology of AGM. The AGM is separated from the caudal half of the embryonic body with the surrounding mesenchymal cells at E10.5. Scale bars = 1 mm. Please click here to view a larger version of this figure. 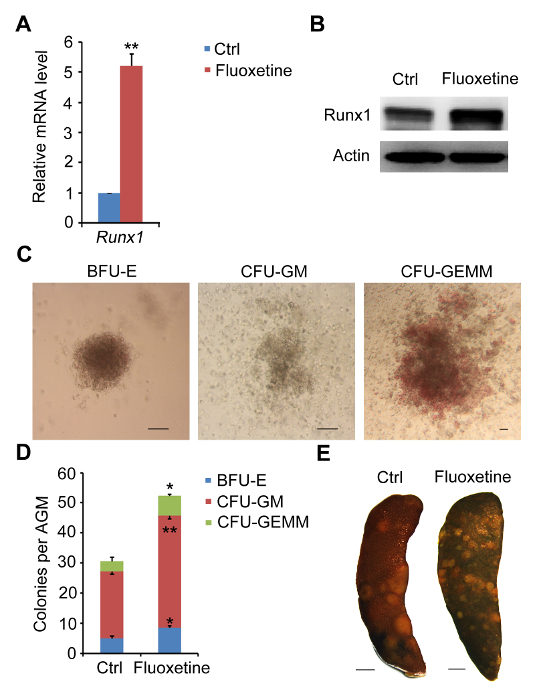 Figure 2. Application of the AGM explant culture system to detect the effect of Fluoxetine on HSC development. (A) The mRNA level of Runx1 in the AGMs treated with Fluoxetine at 10 µM was detected by quantitative real-time PCR. Student's t test: **, P<0.01. The results are presented as mean ± SEM. (B) Western blotting analysis further confirmed the increased expression of Runx1 at the protein level in the AGMs treated with Fluoxetine. (C) The representative images show the morphology of BFU-E, CFU-GM and CFU-GEMM. Scale Bars = 100 µm. (D) CFU-C assay showed that Fluoxetine treatment can increase the number of each type of colony. One embryo equivalent (ee) was used. Student's t test: *, P<0.05; **, P<0.01.The results are presented as mean ± SEM. (E) CFU-S assay with AGMs treated with Fluoxetine showed that Fluoxetine can increase the number of colonies in the spleen of irradiated adult recipients. Scale bars = 1.5 mm. 1 ee was used. Please click here to view a larger version of this figure.

It is well known that mature HSCs in the bone marrow can repopulate the blood system of irradiated recipients. Unlike these functional HSCs, the emerging HSCs in the AGM of mouse embryos are immature. Direct transplantation results showed that type I (VE-cad+ CD45- CD41+) and type II (VE-cad+ CD45+) pre-HSCs possess no reconstitution ability20. Taking advantage of the AGM explant culture system, the nascent HSCs in the AGM region can reconstitute the recipients in the transplantation assay4,20. Furthermore, due to the intrauterine development of the mouse embryo, in vivo experiments to rescue the impaired hematopoiesis in KO mice are inconvenient to perform. The AGM explant culture is an alternative system, which is well suited for rescue experiments, simply by adding the chemicals (growth factors and cytokines) into the medium13,15. In addition to the AGM, the yolk sac and fetal liver can also be cultured with this system7.

At the beginning of this experiment, the strict sterilization of filters and stainless steel meshes is quite important to avoid contamination. More importantly, the critical step in the culture is to make the dissected AGM cultured on the filters at the air-liquid interface. Too much medium will cause the AGM to be cultured in the liquid and it may be decayed, whereas too little medium will make the AGM dry. During culturing, maintaining the proper humidity of the cell incubator is also important to prevent the evaporation of the medium.

Further improvement of this explant culture system to truly mimic the development of HSCs in vivo, together with recent advancements in organoid culture techniques21, will greatly expand its application in hematopoiesis studies, from HSC self-renewal, multi-lineage differentiation, and HSC-niche interaction to disease modeling and drug discovery.

The authors have no conflicting financial interests.

We thank Suwei Gao for help in figure preparation. This work was supported by grants from the National Natural Science Foundation of China (81530004, 31425016) and the Ministry of Science and Technology of China (2016YFA0100500). J.L. performed the experiments and drafted the manuscript; F.L. edited the manuscript. Both authors read and approved the final manuscript. 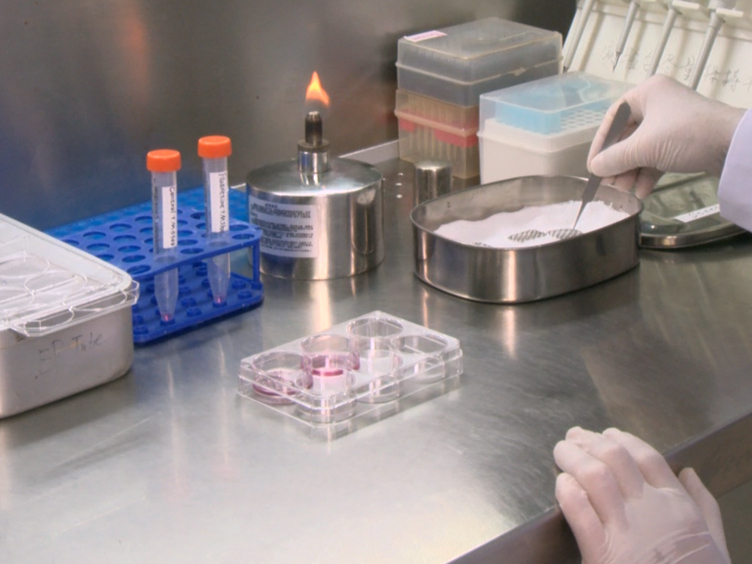