Unlike ubiquitin ligases, few E3 SUMO ligases have been identified. This modified in vitro SUMOylation protocol is able to identify novel SUMO E3 ligases by an in vitro reconstitution assay.

Small ubiquitin-like modifier (SUMO) modification is an important post-translational modification (PTM) that mediates signal transduction primarily through modulating protein-protein interactions. Similar to ubiquitin modification, SUMOylation is directed by a sequential enzyme cascade including E1-activating enzyme (SAE1/SAE2), E2-conjugation enzyme (Ubc9), and E3-ligase (i.e., PIAS family, RanBP2, and Pc2). However, different from ubiquitination, an E3 ligase is non-essential for the reaction but does provide precision and efficacy for SUMO conjugation. Proteins modified by SUMOylation can be identified by in vivo assay via immunoprecipitation with substrate-specific antibodies and immunoblotting with SUMO-specific antibodies. However, the demonstration of protein SUMO E3 ligase activity requires in vitro reconstitution of SUMOylation assays using purified enzymes, substrate, and SUMO proteins. Since in the in vitro reactions, usually SAE1/SAE2 and Ubc9, alone are sufficient for SUMO conjugation, enhancement of SUMOylation by a putative E3 ligase is not always easy to detect. Here, we describe a modified in vitro SUMOylation protocol that consistently identifies SUMO modification using an in vitro reconstituted system. A step-by-step protocol to purify catalytically active K-bZIP, a viral SUMO-2/3 E3 ligase, is also presented. The SUMOylation activities of the purified K-bZIP are shown on p53, a well-known target of SUMO. This protocol can not only be employed for elucidating novel SUMO E3 ligases, but also for revealing their SUMO paralog specificity.

SUMO modification was initially identified as a reversible post-translational modification (PTM) that regulates protein stability1. In addition to direct conjugation, SUMO can also be attached to a protein through non-covalent interaction by SUMO interaction motifs (SIMs)2. Similar to the binding of tyrosyl-phosphorylation by molecules harboring Src homology 2 (SH2) or phosphotyrosine binding (PTB) domains3,4, SUMO modification provides an additional interaction platform for selective recruitment of SIM-containing effector proteins5,6. In addition to regulation of signal transduction, SUMOylation of transcriptional factors and chromatin remodeling molecules serve to modulate gene expression7,8. Studies of genome-wide SUMOylation patterns have revealed that SUMO modification is associated with either positive9,10 or negative10,11,12 transcription regulation, in part due to the paralogue specificity of SUMOylation.

There are three major SUMO isoforms for protein conjugating present in mammalian cells; these include SUMO-1, and the highly homologous SUMO-2 and SUMO-3 (referred to as SUMO-2/3)13. SUMO is usually conjugated to the lysine (K) residue within the ψKxD/E consensus motif in the target protein. The SIM in SUMO E3 ligases is responsible for the paralogue specificity14. In contrast to ubiquitination pathways containing hundreds of E3 ligases, there have only been a few SUMO E3 ligases identified15. SUMO E3 ligases are defined by properties including their ability to (i) bind Ubc9, (ii) bind SUMO moiety via a SIM domain, and (iii) enhance SUMO transfer from Ubc9 onto substrate. E3 ligase is not absolutely required for SUMO conjugation16, but provides substrate and SUMO-paralogue specificity. Since usually only a small fraction of the total substrate protein is SUMO-modified, detection of SUMOylated proteins in vivo is always a challenge. Therefore, accurate and reproducible assays are needed in order to elucidate the precise function of SUMO modification.

The in vitro SUMOylation assay, which evaluates the ability of purified Ubc9 to catalyze SUMOylation of substrate proteins, is a well-accepted assay for studying SUMO modification17. However, SUMO E3 ligase activity in most cases cannot be detected or can only be detected with mutated SUMO ligase with high SUMO E3 ligase activity and low substrate specificity by the standard protocol because of the presence of an abundant amount of Ubc918. The overall success of this assay largely depends upon the careful titration of purified Ubc9. The in vitro SUMOylation assay described here is modified from a standard SUMOylation protocol (see Table of Materials). The observation of increased global SUMO modification during Kaposi's sarcoma-associated herpesvirus (KSHV) reactivation prompted us to identify the viral SUMO E3 ligase that may be responsible for the up-regulation of SUMOylation. Following a small-scale screening of the interacting proteins of viral SUMO E3 ligase K-bZIP, p53 was identified as a novel substrate. In this protocol, we show in detail in insect cells the steps involved in the expression and purification of wild-type K-bZIP, a viral SUMO E3 ligase with SUMO-2/3 specificity. The ability of the purified K-bZIP to enhance SUMOylation of p53, a well-known SUMO substrate, is evaluated in the presence of reduced amounts of E1 and E2 enzymes. Using this modified SUMOylation assay, researchers can reliably define the abilities of SUMO E3 ligase to SUMOylate novel or known substrates, which is a primary step in the study of protein SUMOylation. Moreover, this method helps identify novel SUMO E3 ligases with low ligase activity but high substrate specificity.

Thus, the ability of SUMO E3 ligase K-bZIP to enhance p53 SUMOylation was determined using these modified in vitro SUMOylation conditions. Tagged K-bZIP purified from Sf9 cells (Figure 2A) was employed in a SUMOylation reaction containing lower amounts of E1 and E2 Ubc9 enzymes. Under these modified conditions, K-bZIP could efficiently catalyze the SUMOylation of p53 (Figure 2B). Immunoblotting with anti-p53 antibody confirmed the similar total amounts of p53 in each reaction, and also detected SUMO modified p53. 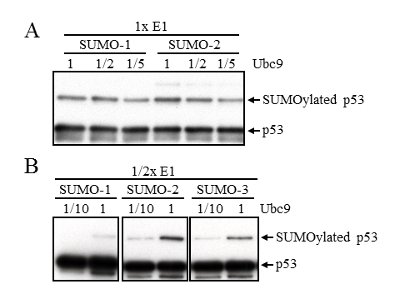 Figure 2: Enhancement of p53 SUMOylation by SUMO E3 ligase K-bZIP. (A) Purified baculovirus-expressed K-bZIP protein, analyzed by SDS-PAGE followed with Coomassie blue staining. 1 µg BSA and 10 µL purified K-bZIP were loading for comparative the protein quantity. (B) K-bZIP enhanced p53 SUMOylation was evaluated by using an in vitro SUMOylation reaction with half the amount of E1 enzyme and one tenth the amount of Ubc9 recommend in the standard protocol. SUMOylated p53 were investigated by Western blot as described in Figure 1A. Please click here to view a larger version of this figure.

The in vitro SUMOylation protocol described here is routinely used to establish the SUMOylation status of identified Ubc9 substrates. The major limitation using the standard protocol to study the SUMOylation function of SUMO E3 ligase is the abundance of SUMO E1 activating and E2 conjugating enzymes Ubc9 that maximize the SUMO conjugation in in vitro systems. Considering this challenge, we believe that titration of the amount of SUMO E1 and E2 enzymes to the level that one can barely detect their activity in SUMOylation is the only way available to determine SUMO E3 ligase catalytic activities using this in vitro SUMOylation system. Following this hypothesis, we successfully elucidated the E3 ligase activity of K-bZIP and identified it as a novel SUMO E3 ligase with specificity towards SUMO-2/3.

The critical step within the protocol is the incorporation of lower amounts of E1 and E2. Using these lower amounts, as shown in Figure 2, novel SUMO E3 ligases with low ligase activity may be able to be identified with preservation of their specificity towards substrate and SUMO paralogues. A major limitation of the technique is the requirement for a high-quality antibody recognizing the SUMO substrate, since only a very small proportion of the substrate can be SUMO modified.

The authors disclose no potential conflicts of interest. 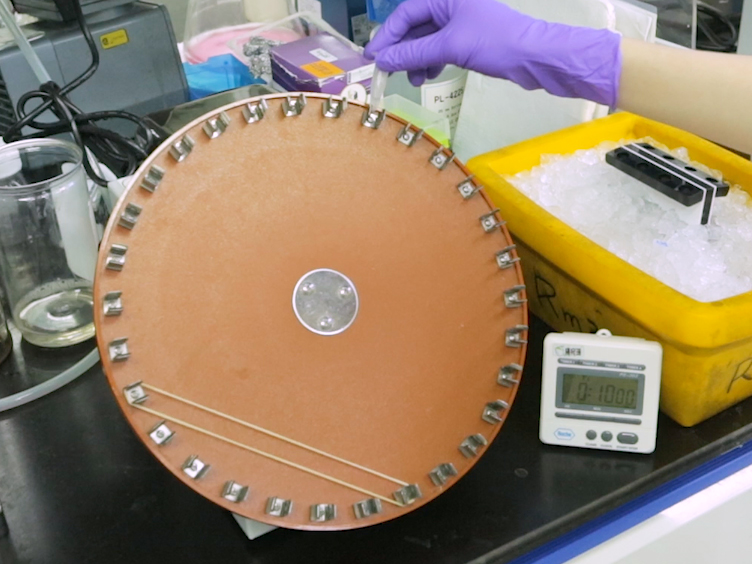