This protocol describes a heat shock-induced protein expression system (pDHsp/V5-His/sf9 cell system), which can be used for either expressing foreign proteins or evaluating the anti-apoptotic activity of potential foreign proteins and their truncated amino acids in insect cells.

The transient gene expression system is one of the most important technologies for performing protein functional analysis in the baculovirus in vitro cell culture system. This system was developed to express foreign genes under the control of the baculoviral promoter in transient expression plasmids. Furthermore, this system can be applied to a functional assay of either the baculovirus itself or foreign proteins. The most widely and commercially available transient gene expression system is developed based on the immediate-early gene (IE) promoter of Orgyia pseudotsugata multicapsid nucleopolyhedrovirus (OpMNPV). However, a low expression level of foreign genes in insect cells was observed. Therefore, a transient gene expression system was constructed for improving protein expression. In this system, recombinant plasmids were constructed to contain the target sequence under the control of the Drosophila heat shock 70 (Dhsp70) promoter. This protocol presents the application of this heat shock-based pDHsp/V5-His (V5 epitope with 6 histidine)/Spodoptera frugiperda cell (sf9 cell) system; this system is available not only for gene expression but also for evaluating the anti-apoptotic activity of candidate proteins in insect cells. Furthermore, this system can be either transfected with one recombinant plasmid or co-transfected two potentially functionally antagonistic recombinant plasmids in insect cells. The protocol demonstrates the efficiency of this system and provides a practical case of this technique.

BEVSs were designated so that the very late gene promoters (i.e., polyhedron or p10 promoter) were used to drive the target genes, while the recombinant baculovirus was generated by homologous recombination. Expression of foreign proteins in insect cells by recombinant baculovirus is similar to that of mammalian proteins in post-translational modifications (suited for glycoprotein production). Thus, the baculovirus has been widely used5,6,7. However, one limitation is the presence of different N-glycosylation pathways in insect cells7.

Therefore, a new baculovirus expression system, the transient gene expression system, was developed. This system expresses foreign genes under the drive of baculoviral immediate-early promoters (ie-1 promoter) in insect cells. By using this system, the target protein can be immediately expressed under the control of ie-1 promoter while modifying the N-glycosylation pathway in insect cells, resulting in better N-linked oligosaccharides7. Moreover, baculoviral immediate-early genes are transcribed by the host cell RNA polymerase II and do not require any viral factor for activation4. Therefore, foreign proteins can be expressed in insect cells within a short time. To date, the transient gene expression system is one of the most important technologies for performing protein functional assays in the baculovirus in vitro cell culture system. The system can be applied to analyze the function of either baculovirus or foreign proteins. One of the commercially available transient gene expression systems is based on the immediate-early gene (IE) promoters of Orgyia pseudotsugata multicapsid nucleopolyhedrovirus (OpMNPV) (OpIE2 and OpIE1 promoters).

In this report, we follow the approach and express three different truncations of the baculoviral gene (inhibitor of apoptosis 3, iap3 from Lymantria xylina MNPV) by using the heat shock-based transient protein expression system and further apply these expressed proteins on anti-apoptotic activity analysis. This system can either express foreign proteins quickly or be further applied to the evaluation of protein anti-apoptotic activity in sf9 cells, while also having the potential to be applied to other protein activity assays.

The full length and other two truncations (BIR and RING domains) of Ly-IAP3 from LyxyMNPV were overexpressed in sf9 cells, based on the heat shock-based pDHsp/V5-His/Spodoptera frugiperda cell (sf9 cell) system. The pDHsp/V5-His contained a Drosophila heat shock protein promoter, which drives downstream gene expression at a temperature of 42 °C condition by using cellular transcriptional factors and the translation system (Figure 1)8,9,11. The whole technological flowchart is shown in Figure 2. After 1 h or 5 h heat shock, the cells were lysed with protein sample buffer and subjected to Western blot assay to confirm the protein expression. The results indicated that the full-length proteins, AC-P35, Ly-IAP3, Ly-IAP3-BIR, and Ly-IAP3-RING, could be detected in transfected cells at either 1 h or 5 h post-heat shock. Moreover, the protein accumulations were found at 5 h post-heat shock (Figure 3). Thus, according to the data, the protein functional assay was performed at the maximum protein expression time point (5 h post-heat shock). 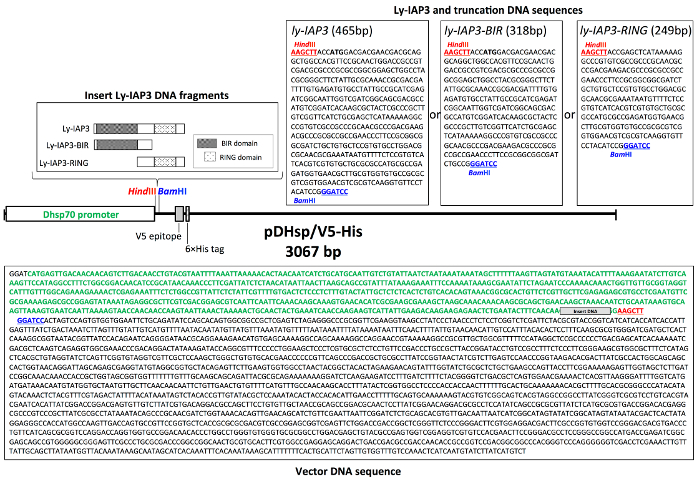 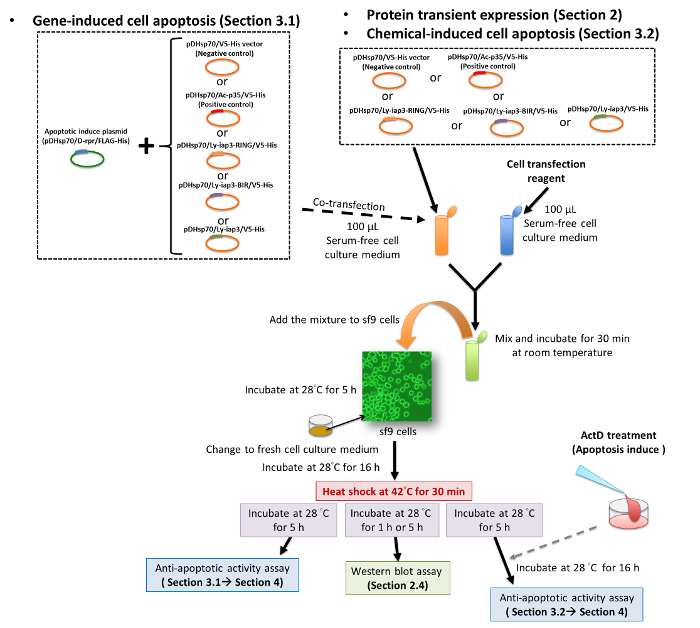 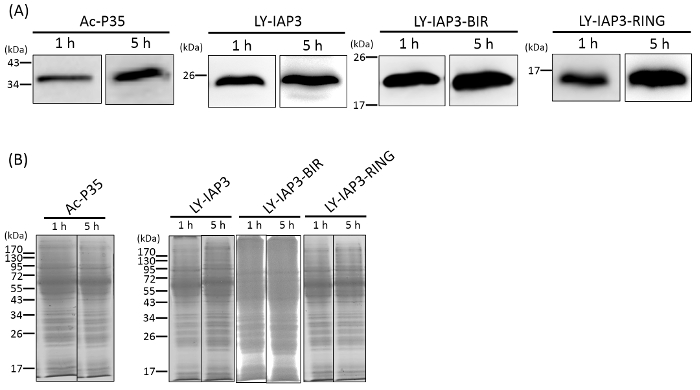 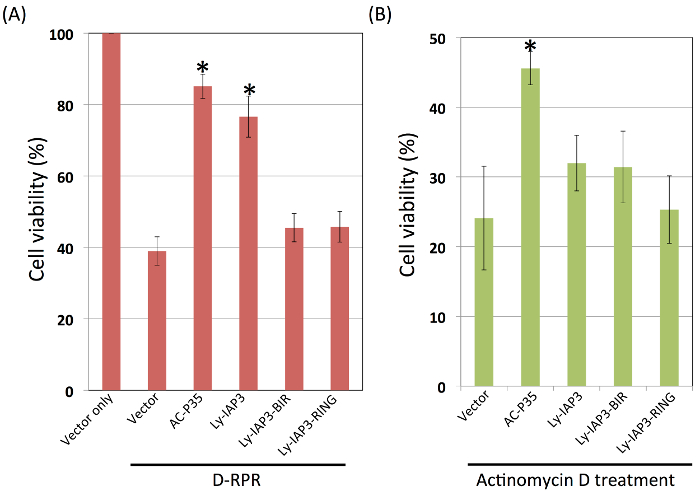 The concept of heat shock-based pDHsp/V5-His/sf9 cell system was first described by Clem et al. in 19948. Comparison of the baculoviral gene promoter (IE1) and Drosophila hsp70 showed that hsp70 had a higher efficiency in mosquito cells10. Furthermore, due to the heat shock induction, the timing of protein expression could be controlled precisely after heat shock treatment. This system was then applied for protein functional assays of shrimp and nucleopolyhedrovirus (NPV) IAP proteins9,11. In this protocol, a total of 6 plasmid constructions were used: three (pDHsp/V5-His, pDHsp/Ac-p35/V5-His, and pDHsp/D-rpr/FLAG-His) were provided by Jian-Horng Leu9, and the other three constructions (pDHsp-iap3/V5-His, pDHsp-iap3-BIR/V5-His, and pDHsp-iap3-RING/V5-His) were constructed by Nai et al., 201611. It seems that this promoter in insect cells works more efficiently than baculoviral gene promoters. However, during manipulation of this protocol, there are several points that need to be considered. Before plasmid transfection, checking the insertion of the DNA sequence is important for gene expression; thus, it should be fused with the V5 epitope to form a V5-tagged fusion protein at the end of the target sequence. Moreover, different fusion tags (i.e., FLAG epitope) could also be designed in the pDHsp-based vector for an in vitro protein binding assay. This extension procedure would help further investigate protein-protein interactions9. Therefore, the commercial V5 polyclonal antibody could be used for the detection of proteins. The transfection ratio in different insect cells should be tested before the experiment. Lower transfection rates might result in non-detectable of protein expression; thus, a pDHsp vector containing a suitable report gene (i.e., green fluoresce gene) could be transfected into insect cells to evaluate transfection efficiency.

The major limitation of this heat shock expression platform is the protein expression level. In some cases, a low protein expression level was found. According to a pilot study, there was no significant dose-dependent effect that occurred when more plasmid DNA was transfected into sf9 cells (data not shown). Thus, this effect may be caused by the ubiquitin proteasome pathway (UPP) or other unknown mechanisms11. Researchers should examine the protein expression in the presence of the proteasome inhibitor (i.e., MG-132) to clarify and recolve this issue11. The other limitation is that sustainable production of protein associated with the recombinant viruses could not be achieved. Thus, the stabilization and amount of protein expression are also concerns regarding this system. Therefore, a time course of protein production should also be tested by Western blot assay before the functional assay. In this protocol, we compared two time points (1 and 5 h after heat shock) and observed the accumulation of target protein production from 1 h to 5 h. An increase in time points is suggested in order to determine the best timing conditions for the protein functional assay.

For the protein functional assay, the anti-apoptotic protein Ac-P35 (positive control) and an apoptosis-inducer protein (D-RPR) were also expressed using this heat shock transient expression system. These two proteins are described as functional antagonists9,11,15. Therefore, the vector/D-RPR and Ac-P35/D-RPR could serve as a negative control and positive control, respectively. Using this comparison, the anti-apoptotic activity of target proteins could be determined.

The presented protocol could provide a platform to express foreign proteins more quickly or could be further applied to evaluate protein anti-apoptotic activity in insect cells. Once researchers obtain the preliminary results of protein function, this system could be used for further studies.

We thank Dr. Jian-Horng Leu of Institute of Marine Biology, National Taiwan Ocean University for providing 3 plasmid constructions. This research was supported by Grant 106-2311-B-197 -001 - from the Ministry of Science and Technology (MOST). 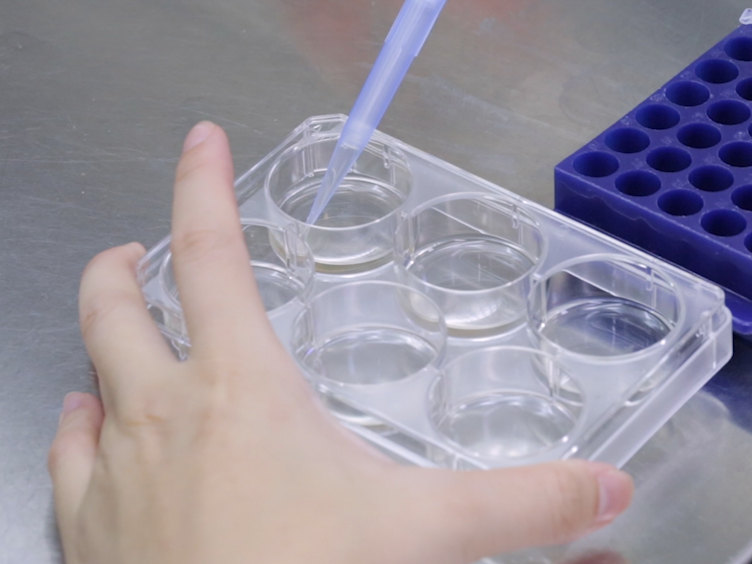