This paper describes a detailed and highly effective protocol for single sensillum recordings from the sensilla basiconica on the palps of insect mouthparts.

The palps of locust mouthparts are considered to be conventional gustatory organs that play an important role in a locust's food selection, especially for the detection of non-volatile chemical cues through sensilla chaetica (previously named terminal sensilla or crested sensilla). There is now increasing evidence that these palps also have an olfactory function. An odorant receptor (LmigOR2) and an odorant-binding protein (LmigOBP1) have been localized in the neurons and accessory cells, respectively, in the sensilla basiconica of the palps. Single sensillum recording (SSR) is used for recording the responses of odorant receptor neurons, which is an effective method for screening active ligands on specific odorant receptors. SSR is used in functional studies of odorant receptors in palp sensilla. The structure of the sensilla basiconica located on the dome of the palps differs somewhat from the structure of those on the antennae. Therefore, when performing an SSR elicited by odorants, some specific advice may be helpful for obtaining optimum results. In this paper, a detailed and highly effective protocol for an SSR from insect palp sensilla basiconica is introduced.

CSNs express various chemosensory receptors [e.g., odorant receptors (ORs)], ionotropic receptors (IRs), and gustatory receptors (GRs) on their membranes, which encode exogenous chemical cues associated with different types of chemosensation4,5,6. The characterization of CSNs is key to the elucidation of cellular and molecular mechanisms of insect chemoreception. Now single sensillum recording (SSR) is a widely-used technique for the characterization of insect CSNs in the antennal sensilla of many insects, including flies7, moths8, beetles9, aphids10, locusts11, and ants12. However, few studies have applied an SSR to insect palps13,14,15,16,17, because the particular structures of their sensilla make an electrophysiological recording difficult18.

Swarms of locusts (Orthoptera) often cause serious crop damage and economic loss19. The palps are believed to play an important role in the food selection of locusts20,21,22,23,24. Two types of chemosensory sensilla are investigated by a scanning electron microscope (SEM). Usually, 350 sensilla chaetica and 7 - 8 sensilla basiconica are observed on each dome of the locust palps18. Sensilla chaetica are gustatory sensilla that sense non-volatile chemical cues, whereas sensilla basiconica have an olfactory function, sensing volatile chemical cues.

On locust palps, the diameters of the hair sockets of the sensilla basiconica (ca. 12 µm), are much greater than those of sensilla chaetica (ca. 8 µm)18,25. The cuticular wall of the sensilla basiconica on the palps is much thicker than that of antennal sensilla18. In addition, the dome of the palp has fluid contents within a highly flexible cuticle. These characteristics mean that a penetration with a microelectrode and an acquisition of good electrophysiological signals is more difficult than for antennal sensilla. In this paper, a detailed and highly effective SSR protocol for locust palp sensilla basiconica is presented with a video.

1. Preparation of Instruments and Insect

Two sensilla subtypes (pb1 and pb2) on the locust maxillary palp are identified based on different response dynamics to chemical odorants (10% 1-nonanol and 10% nonanoic acid). The neurons in pb1 produce significantly more spikes to 1-nonanol than to nonanoic acid while the neurons in pb2 are significantly less activated by 1-nonanol compared with nonanoic acid (Figure 4). Hexanal and E-2-Hexenal can evoke a locust palp opening response (POR)26. Hexanal is an abundant host plant green leaf volatile which may contribute to a further confirmation to the food source26. The spikes elicited in the pb1 neurons last longer than those of pb2 when they are stimulated by E-2-hexenal (Figure 4). The neurons in pb1 and pb2 exhibit similarly robust responses to hexanal (Figure 4). Comparing the mean changes of all spikes between the periods 5 s before and 5 s after the stimulation indicates that the response to 1-nonanol is significantly higher than to nonanoic acid in pb1, but contrarily in pb2 (Figure 5). The neurons in these two subtypes of sensilla respond dose-dependently to E-2-hexenal and hexanal, and their response patterns to these two aldehydes differ (Figure 6A and 6B). 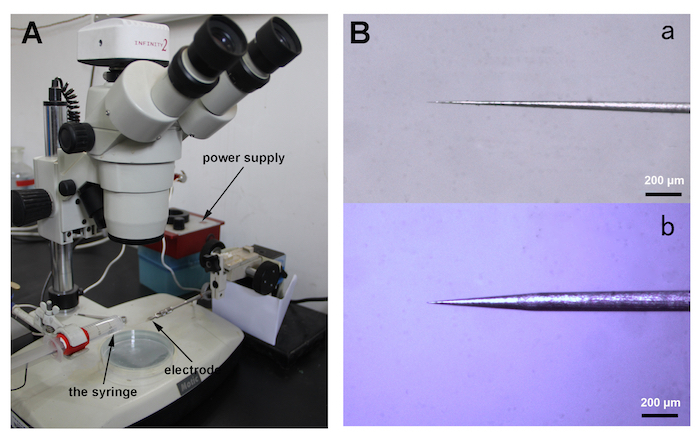 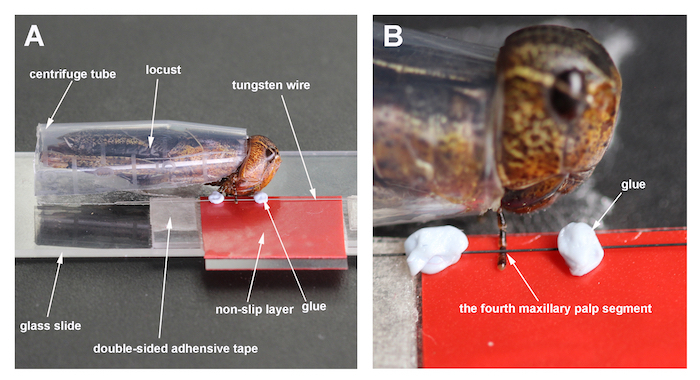 Figure 2. Locust maxillary palp holder (MPH). (A) The MPH and a locust are mounted on the glass slide before positioning it under the microscope. (B) This panel shows a close-up of the locust maxillary palp, fixed by tungsten wire on the platform. Please click here to view a larger version of this figure. 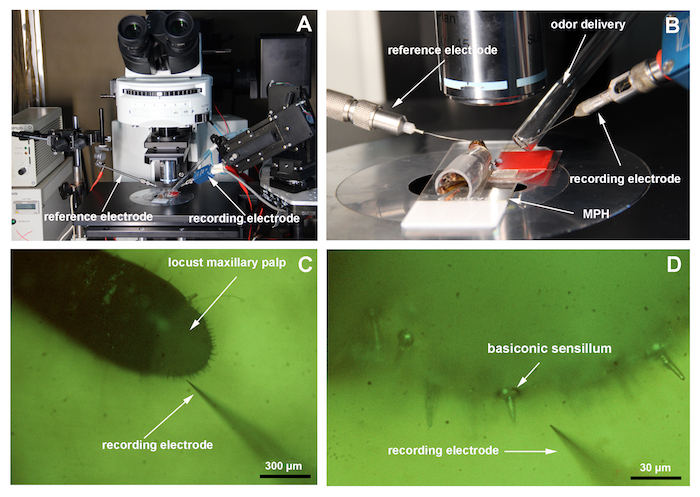 Figure 3. Single sensillum recordings. (A) This panel shows a view of the electrophysiology setup. (B) This panel shows a close view of the locust preparation mounted on the microscope. (C) This image shows the locust maxillary palp at 100X magnification. (D) This image shows the palp at 500X magnification. The arrow indicates a basiconic sensillum. Please click here to view a larger version of this figure. 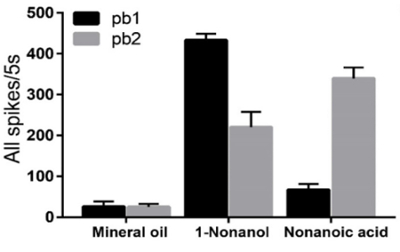 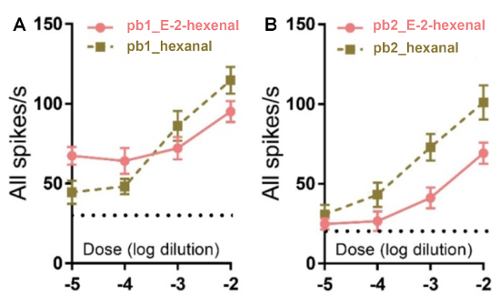 Insects rely on palps to detect food odors, and their palps are believed to play an important role in speciation13,27. The palps are simple olfactory organs and are receiving increasing attention as an attractive model for the exploration of the neuromolecular networks underlying chemosensation28.

Insect labellar and palp SSRs have been successfully performed on Drosophila melanogaster, Anopheles gambiae, and Culex quinquefasciatus13,14,15,16,17 but have rarely been reported in the form of a video presentation16,29. In contrast, video data on antennal SSRs are available for Drosophila, the navel orangeworm moth (Amyeloistransitella), Schistocerca Americana, and the bed bug (Cimex lectularius)16,30,31,32,33.

The critical step is the penetration of the recording electrode. The recording electrode should be inserted into the base of the sensillum and advanced until good signals are acquired. In addition, it is important to prevent the dome of the palp from collapsing when the recording electrode is inserted into the base of the sensillum. To achieve this, we set up a platform including a special locust maxillary palp holder (MPH) and used a tungsten wire to compress the fourth segment of the palp. Many repetitions of this procedure demonstrate that this is effective. Based on the response patterns of the neurons in the sensilla to several odorants, we have, for the first time, identified two subtypes of sensilla basiconica on the locust maxillary palp, namely pb1 and pb2.

The limitation of the technique outlined in this publication is that it could be used to record big insects (e.g., moths, beetles, and locusts) while not to record small insects (e.g., flies and mosquitoes), which have their own platforms and techniques13,14,15,16,17. This technique is complementary to existing methods.

In conclusion, a highly effective protocol of an SSR from insect palp sensilla basiconica is described in detail. This protocol could provide researchers with a useful technique in the study of molecular and cellular mechanisms of insect olfaction on the mouthpart. This method linked with gas chromatography could be used to identify natural electrophysiologically-active ligands in extracts of favorable food resources.

This work is supported by a grant from the National Natural Science Foundation of China (No.31472037). Any mention of trade names or commercial products in this article is solely for the purpose of providing specific information and does not imply a recommendation. 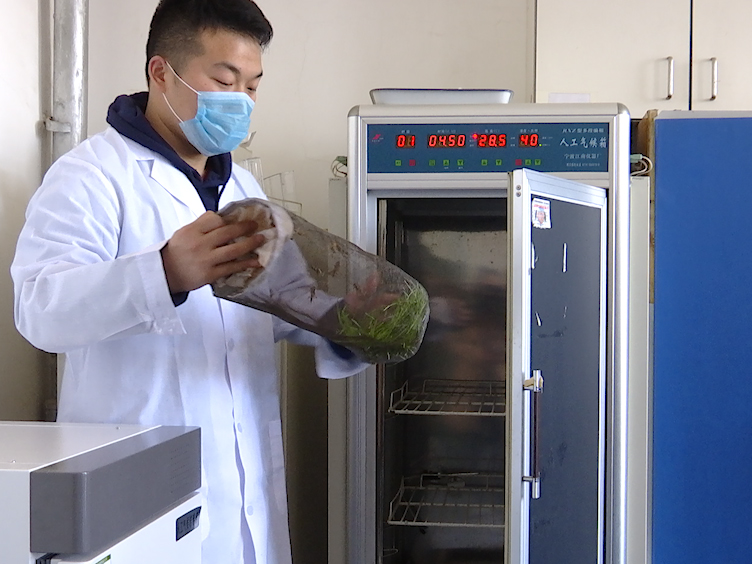