A protocol for the elucidation of plant thylakoid protein complex organization and composition with blue native polyacrylamide gel electrophoresis (BN-PAGE) and 2D-SDS-PAGE is described. The protocol is optimized for Arabidopsis thaliana, but can be used for other plant species with minor modifications.

NOTE: All steps should be performed under very dim light. Keep samples and buffers on ice.

A representative 2D-BN/SDS-PAGE system in Figure 1 demonstrates the separation of digitonin and β-DM-solubilized thylakoid protein complexes and their detailed protein subunit composition. The protein complex pattern of digitonin solubilized thylakoids (horizontal gel on the top on the top of Figure 1A) contains the PSII-LHCII-PSI megacomplex, two large PSII-LHCII supercomplexes (sc), PSI-LHCII supercomplex, PSI monomer (m), PSII m/Cyt b6f, loosely bound (L)-LHCII trimer (Figure 1A). The slightly stronger detergent, β-DM, solubilizes the entire thylakoid membrane (horizontal gel on the top of Figure 1B), but is unable to preserve weak interactions between protein complexes. Thylakoid solubilization with β-DM typically produces four PSII-LHCII supercomplexes (with different amount of LHCII antenna attached), PSII dimer (d) and PSI m, ATPase, PSII m and Cytb6f, M-LHCII, L-LHCII and LHCII monomer (Figure 1B). Unlike β-DM, digitonin produces only minor amount of LHCII monomer. The protein complex pattern may differ depending on plant exposure to different light conditions and might also differ between mutant lines, since the protein complex interactions are dynamic and dependent on i.e., protein phosphorylation. SDS-PA gels below the native gel strips in Figure 1 A and B represent the polypeptide composition of each protein complex initially solubilized with digitonin or β-DM. 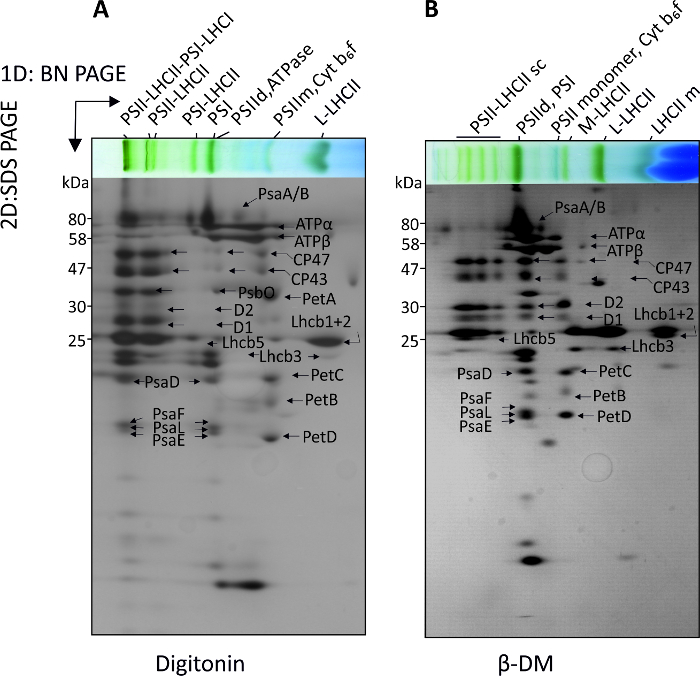 Figure 1. A two-dimensional BN-PAGE/SDS-PAGE of Arabidopsis thylakoid. Thylakoid protein complexes solubilized with (A) 1% digitonin and (B) 1% β-DM and separated first by 1D-BN-PAGE (the lanes on top) and subsequently on 2D-SDS-PAGE to demonstrate the individual protein composition of each complex. Due to the incubation of BN-strips with denaturing Laemmli buffer, the protein subunits of each complex (in the BN strip) dissociate and are separated in a vertical line during the 2D-SDS-PAGE. The protein identification is based on mass spectrometry analysis presented in references7,8. Please click here to view a larger version of this figure.

For the solubilization of membrane protein complexes, nonionic detergents are commonly used for their ability to preserve the complexes in their native form. Here, two commonly used detergents β-DM and digitonin were applied. Dodecyl maltoside solubilizes individual protein complexes, whereas digitonin can be used for the analysis of larger protein complex assemblies10. The bulky structured digitonin is unable to fit to the tightly appressed grana partitions and therefore solubilizes only the non-appressed regions of the thylakoid membrane3,11. It is therefore suited for the analysis of stroma thylakoids and grana margins. However, when digitonin is used together with aminocaproic acid (ACA), the combination solubilizes the entire thylakoid membrane, including also the appressed grana thylakoids12. Through an unknown mechanism, ACA allows digitonin to have access to the partition gap between adjacent grana membrane layers. Importantly, digitonin preserves labile interactions between protein complexes and can therefore be used for the analysis of labile protein super and megacomplexes, which are most abundant in the non-appressed thylakoid regions8. It must be noted that detergents always interfere with some of the labile interactions between the protein complexes and therefore it is not possible to isolate completely intact network of protein complexes. Some of the complexes are dissociation products that have been disconnected from larger protein complex associations during thylakoid solubilization and the electrophoresis. The quality of the BN-PAGE separation depends not only on the sample preparation (protein complex solubilization), but also on the quality of the thylakoid isolation, which must be done from fresh leaves. If special care is not taken, the PSII-LHCII supercomplexes typically degrade during β-DM solubilization.

This research was financially supported by the Academy of Finland (project numbers 307335 and 303757) and Solar Energy into Biomass (SE2B) Marie Skłodowska-Curie grant agreement (675006). The protocol is based on reference3. 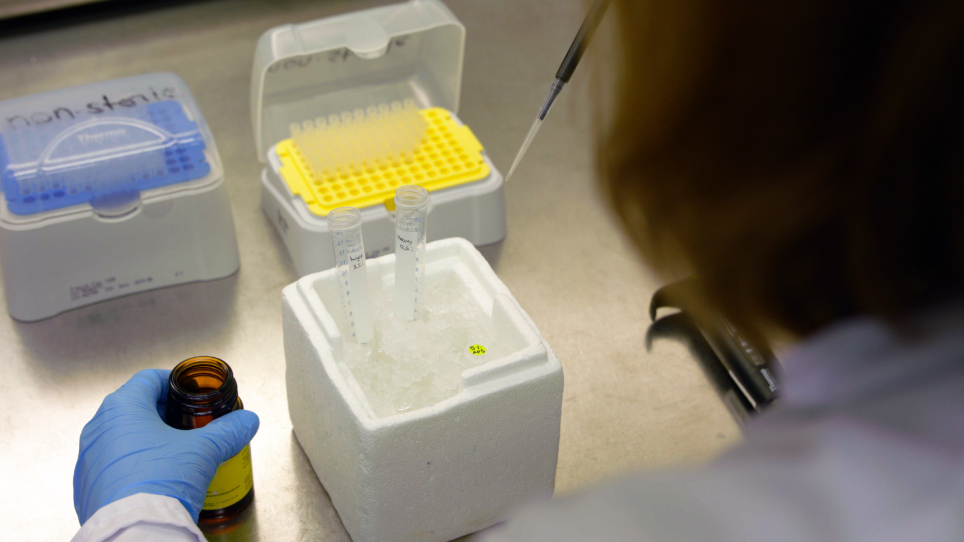