The bacterial CRISPR/Cas9 system has substantially increased methodological options for life scientists. Due to its utilization, genetic and genomic engineering became applicable to a large range of systems. Moreover, many transcriptional and epigenomic engineering approaches are now generally feasible for the first time. One reason for the broad applicability of CRISPR lies in its bipartite nature. Small gRNAs determine the genomic targets of the complex, variants of the protein Cas9, and the local molecular consequences. However, many CRISPR approaches depend on the simultaneous delivery of multiple gRNAs into individual cells. Here, we present a customizable protocol for string assembly gRNA cloning (STAgR), a method that allows the simple, fast and efficient generation of multiplexed gRNA expression vectors in a single cloning step. STAgR is cost-effective, since (in this protocol) the individual targeting sequences are introduced by short overhang primers while the long DNA templates of the gRNA expression cassettes can be re-used multiple times. Moreover, STAgR allows single step incorporation of a large number of gRNAs, as well as combinations of different gRNA variants, vectors and promoters.

String assembly gRNA cloning (STAgR) is a method enabling efficient overnight generation of expression vectors containing multiple gRNA expression cassettes in one single cloning step. The STAgR protocol does not depend on specialist expertise or materials and offers multiple options for customization.

The bacterial CRISPR protein Cas9 has a unique capacity. It is able to find and selectively bind only those DNA sequences encoded in naturally occurring crRNAs or engineered gRNAs1. Its utilization as a molecular tool has enabled a large number of approaches that were impossible, unfeasible or only limited to certain cellular models until recently. These include targeted gene mutations2, genome engineering3, epigenome editing4,5,6, transcriptional activation and gene silencing7,8. As far as we know CRISPR is universally deployable, as reports of its application exist for a wide range of target sites, cell types and species. However, many CRISPR applications depend directly or indirectly on the delivery of multiple gRNAs including a series of genomic manipulations (translocations9,10, medium11 and large scale genomic alterations12,13), genome engineering (use of Cas9 nickases14, generation of conditional alleles11,15 or serial mutations16) and tracing strategies17. Moreover, for other approaches (transcriptional engineering18, epigenome engineering19,20) multiple targeting sites are not strictly mandatory, however they reach their maximum effect often only under this condition.

Several useful methods have been described to generate gRNA vectors containing more than one gRNA expression cassette21,22,23,24,25,26,27. Here, we present a protocol for STAgR, string assembly gRNA cloning, which is outstanding in its combination of simplicity and speed (only one overnight cloning step is needed), low cost (as DNA templates can be reused multiple times), customizability (for different gRNA systems and promoters) and effectiveness (it allows the generation of vectors containing high numbers of gRNA cassettes)28.

STAgR can in principle be used to generate expression vectors with few (1–2 gRNAs), several (3–5 gRNAs) and some of the highest number of expression cassettes reported so far (6–8 gRNAs)28. Similarly, STAgR is applicable for any gRNA sequence, backbone or promoter. Since however, STAgR is mainly based on polymerase chain reactions (PCR) and Gibson assembly, gRNAs with high sequence similarities should be generated using an alternative method.

NOTE: The sense protospacer sequence of the last gRNA and the antisense of the first gRNA respectively are added to the PCR primers used for amplification of the vector backbone (Figure 1). The remaining sequences are amplified from the strings, thereby attaching the sense and antisense gRNAs in the desired order. The first string piece is amplified with a forward primer containing the first gRNA N20 sequence as an overhang and a reverse primer with the second gRNA N20 sequence (reverse complement) as an overhang. All the following pieces are generated accordingly.

NOTE: The following steps are adapted from Gibson et al.30.

Following the protocol at hand makes the generation of customized multiplexing gRNA vectors feasible (Figure 1). Representative results of STAgR approaches using six different gRNA cassettes are depicted in Figure 2. Figure 2A shows a typical outcome of the PCRs used to obtain the STAgR pieces (protocol 3.1-3.3). The six amplicons (BB, S1-S5) represent linear DNA pieces containing the individual gRNA N20 sequences on their ends. The plasmid backbone (BB) is now extended with the targeting sequences of gRNA1 and gRNA6 and therefore possesses the required overlaps to two other PCRs (S1 and S5) for Gibson assembly (Figure 2A, Table 3). After purification a DNA yield of at least 1 µg for vectors and inserts can be achieved.

After Gibson assembly, bacterial transformation should result in 100 to 700 bacterial colonies. Figure 2B shows a representative analysis of 10 bacterial colonies via colony PCR, following a STAgR protocol with six gRNA cassettes. Gel electrophoresis indicates that three clones show the expected amplicon size for full assembly (Table 2). Other clones likely received STAgR vectors containing one to five gRNA cassettes, whereas one clone (Figure 2B, No.18) is empty. 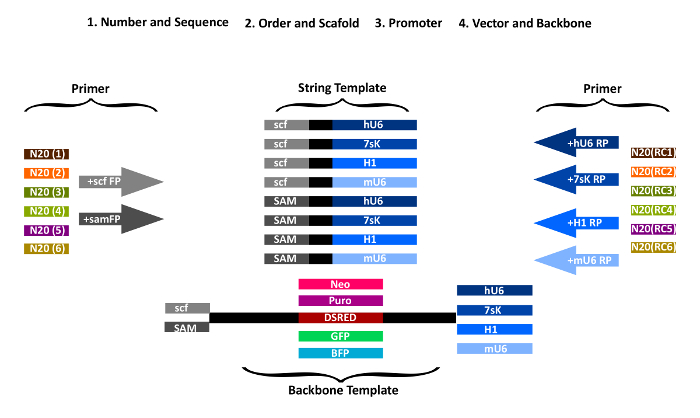 Figure 1: Overview of STAgR primer design. First gRNA number and scaffolds are chosen, then gRNA order and promoter and last, which type of vector should be used. For each gRNA, a specific forward primer with the gRNA targeting sequence in sense orientation and either the common part of "scf-FP" or "sam-FP" is designed. Similarly, to generate the individual reverse primer the corresponding promoter sequence (RP) is fused with the reverse complement of the N20 sequence of the next gRNA. Please click here to view a larger version of this figure. 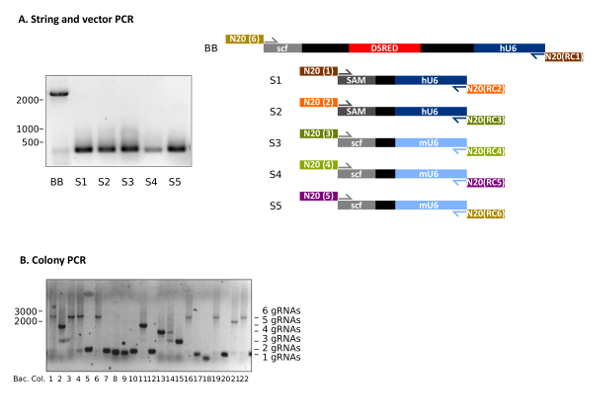 Figure 2: Representative results of STAgR approaches using six different gRNA cassettes. (A) Representative example of a PCR of five inserts as well as the vector STAgR_Tomato. (B) Colony PCR of a 6x STAgR reaction using hU6 and mU6 promoters and canonical gRNA as well as SAM scaffolds. 22 bacterial colonies were analyzed, of which 7 showed the expected band indicating complete assembly. Ladder: 1 kb plus, numbers in base pairs (bp). Please click here to view a larger version of this figure.

Table 3: Sizes of promoters and scaffolds.

Here we present a detailed protocol for STAgR allowing the fast and simple generation of gRNA expression plasmids of varying sizes. This protocol can be used for one-step generation of gRNA plasmids with 2–8 gRNA expression cassettes (with or without two MS2 RNA aptamers) into the gRNA expression vector STAgR_Neo, and the use of human U6, mouse U6, human 7sK and human H1 promoters28,32,33. If more than four cassettes are desired, it is recommended to use at least two different promoter/scaffold types to increase efficiency. Other vectors, promoters and promoter combinations as well as more than 8 gRNA cassettes might be feasible as well; however, this has not been tested. Although in our experience the method works reliably and reproducibly, we have determined critical steps and troubleshooting strategies should the expected outcome not immediately occur. In our experience some steps are pivotal for the success of the approach: first and foremost, it is important to use the correct molar ratios of inserts to the vector backbone at the Gibson assembly step (3:1). However, we noticed that for some gRNA sets a 1:1 ratio of inserts to vector is beneficial, even when the gRNA cassette number does exceed two. Secondly, the period of the Gibson assembly reaction should be sufficiently long (at least 45 min recommended).

STAgR can be employed with a large number of modifications. Targeting sequences, gRNA numbers and scaffolds, promoters and vector backbones can be customized and freely combined. However, each combination may have slightly different requirements. In our experience, if medium or high numbers of gRNA cassettes (>4) are desired but not obtained immediately, usually the fastest way to overcome this issue is to change the order of the individual gRNA cassettes in the vector. Similarly, combining different gRNA promoters and scaffolds improves efficiency (and thus lowers the required number of colony PCRs that have to be scored) when many gRNA cassettes are cloned. We found that incorrect clones are usually generated by the spontaneous conjunction of repeated sequences during Gibson assembly. Although this can reduce the efficiency of the method, this also results in the simultaneous generation of vectors with functional gRNA subsets28.

Generation of multiplexing gRNA vectors containing more than one gRNA expression cassette has been reported with a number of different methods21,22,23,24,25,26,27. While some employ simultaneous or sequential cloning of gRNA pairs22,34, others depend on Golden Gate assembly and several sequential cloning steps25,35. A special approach has been used by Xie et al., by employing the endogenous cellular tRNA processing system to cut several gRNAs out of a single progenitor transcript36. The advangetage of this method is the requirement of only one promoter; the drawback is the need of newly synthesized DNA fragments for each gRNA combination. Each gRNA multiplexing method has advantages and disadvantages; STAgR combines simplicity with efficiency, high number of possible gRNA cassettes with low cost.

STAgR (and other multiplexing systems) will likely be instrumental in enabling efficient (and simultaneous) disruption of multiple genes in vivo, as pioneered in zebrafish brains28. Another future application of gRNA multiplexing vectors is the promise for manipulation of complete transcriptional programs in contrast to the induction or repression of single genes. Likely, these approaches will allow transforming cells and organs at will to a much higher degree than it is possible today.

The authors would like to thank Prof. Dr. Stephan Beck and Prof. Dr. Jovica Ninkovic for their input, help and support in developing the STAgR method. Tobias Klötzer, Anna Köferle and Valentin Baumann for helpful comments. The work has been supported by DFG (STR 1385/1-1). 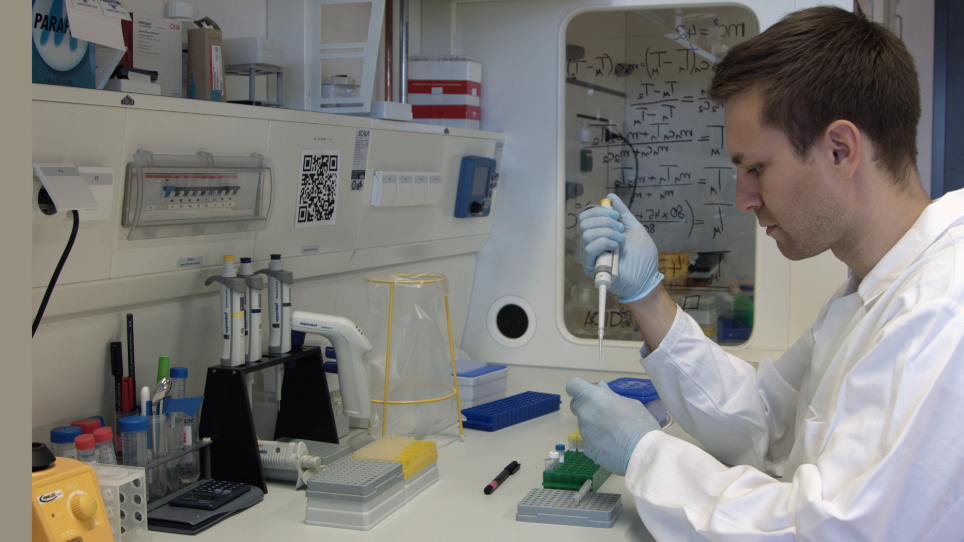