The fabrication and characterization protocol for a metasurface beam splitter, enabling equal-intensity beam generation, is demonstrated. Hydrogenated amorphous silicon (a-Si:H) is deposited on the fused silica substrate, using plasma-enhanced chemical vapor deposition (PECVD). Typical amorphous silicon deposited by evaporation causes severe optical loss, impinging the operation at visible frequencies. Hydrogen atoms inside the amorphous silicon thin film can reduce the structural defects, improving optical loss. Nanostructures of a few hundreds of nanometers are required for the operation of metasurfaces in the visible frequencies. Conventional photolithography or direct laser writing is not feasible when fabricating such small structures, due to the diffraction limit. Hence, electron beam lithography (EBL) is utilized to define a chromium (Cr) mask on the thin film. During this process, the exposed resist is developed at a cold temperature to slow down the chemical reaction and make the pattern edges sharper. Finally, a-Si:H is etched along the mask, using inductively coupled plasma–reactive ion etching (ICP-RIE). The demonstrated method is not feasible for large-scale fabrication due to the low throughput of EBL, but it can be improved upon by combining it with nanoimprint lithography. The fabricated device is characterized by a customized optical setup consisting of a laser, polarizer, lens, power meter, and charge-coupled device (CCD). By changing the laser wavelength and polarization, the diffraction properties are measured. The measured diffracted beam powers are always equal, regardless of the incident polarization, as well as wavelength.

Metasurfaces consisting of two-dimensional subwavelength antenna arrays have demonstrated many promising optical functionalities, such as achromatic lenses1,2, holograms3,4,5,6, and optical cloaks7. Conventional bulky optical components can be replaced with ultrathin metasurfaces while maintaining the original functionalities. For example, a beam splitter is an optical device used to separate an incident beam into two beams. Typical beam splitters are made by combining two triangular prisms. Since their interface characteristics determine the beam splitting properties, it is hard to reduce the physical size without functional degradation. On the other hand, ultrathin beam splitters can be realized with metasurfaces encoded with a one-dimensional linear phase gradient8,9. The thickness of metasurfaces is less than their working wavelengths, and separation properties can be controlled by the phase distribution.

Here, we present a protocol for the fabrication and optical characterization of dielectric metasurfaces enabling equal-intensity beam generation. The phase distribution of this device is retrieved from the Gerchberg–Saxton (GS) algorithm, which is generally used for phase-only holograms12. a-Si:H of 300 nm thick is deposited on the fused silica substrate, using PECVD. A Cr mask is defined on the a-Si:H film, using EBL. The mask pattern corresponds to the phase distribution derived from the GS algorithm. ICP-RIE is exploited to etch the a-Si:H film along the Cr mask. The rest of the Cr mask is removed by Cr etchant finalizing the sample fabrication. The optical functionality of the fabricated metasurface is characterized using a customized optical setup. When a laser beam is incident to the metasurface, the transmitted beam is separated into three parts, namely two diffracted beams and one zeroth-order beam. The diffracted beams deviate from an extension of the incident beam path while the zeroth-order beam follows it. To verify the functionality of this device, we measured the beam power, beam profile, and diffracted angle using a power meter, CCD, and protractor, respectively.

All the fabrication processes and materials used are optimized for the target functionality. For visible working frequencies, the individual antenna sizes should be a few hundreds of nanometers, and the material itself should have a low optical loss at visible wavelengths. Only a few kinds of fabrication methods are applicable when defining such small structures. Typical photolithography, as well as direct laser writing, are incapable of the fabrication due to the diffraction limit. Focused ion beam milling can be used, but there are critical issues of gallium contamination, pattern design dependence, and the slow process speed. Practically, EBL is the only way to facilitate the fabrication of metasurfaces working at visible frequencies13.

Dielectrics are usually preferred due to the unavoidable ohmic loss of metals. The optical loss of a-Si:H is low enough for our purpose. Although the optical loss of a-Si:H is not as low as low-loss dielectrics such as titanium dioxide1,4 and crystalline silicon14, the fabrication of a-Si:H is much simpler. Typical evaporation and sputtering processes are not capable of the deposition of an a-Si:H film. PECVD is usually required. During the PECVD process, some hydrogen atoms from SiH4 and H2 gases are trapped among the silicon atoms, resulting in an a-Si:H film. There are two ways to define a-Si:H patterns. One is the deposition of a-Si:H on a patterned photoresist, followed by the lift-off process, and the other is by defining an etching mask on the a-Si:H film, followed by the etching process. The former is well-suited to evaporation processes, but it is not easy to deposit a-Si:H film using evaporation. Hence, the latter is the optimal way to make a-Si:H patterns. Cr is used as the etching mask material because of its high etching selectivity with silicon.

1. Fabrication of the dielectric metasurface

2. Optical characterization of the dielectric metasurface 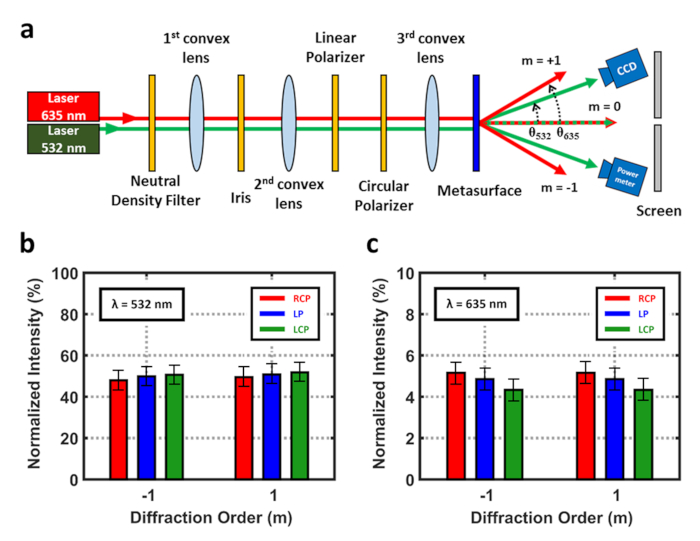 Figure 1: Diffracted beam power measurement. (a) The optical setup for the laser illumination. The next two panels show the measured diffracted beam power (b) at λ = 532 nm and (c) at 635 nm. Since the laser beam power was not consistent, the measured beam powers are calculated by time-averaging recorded values. The error bars in the figure represent the maximum and minimum values during the recording time. This figure has been modified from Yoon et al.10. Please click here to view a larger version of this figure.

Figure 3: Captured beam profiles by CCD taken 14 cm behind the metasurface. The beam diameters can be estimated at ~3 mm at λ = 532 nm and ~5 mm at λ = 635 nm. The corresponding beam diverging angles are approximately 2.5° and 4.1°, respectively. The captured beam profiles have laser speckles, but they can be removed by diffusers1 or Dammann grating3,15. This figure has been modified from Yoon et al.10. Please click here to view a larger version of this figure.

Some fabrication steps should be conducted carefully, to generate a metasurface that is the same as the original design. In the resist development process, a low-temperature solution is usually preferred. The standard condition is room temperature, but the reaction speed can be slowed down by decreasing the solution temperature to 0 °C. Although the corresponding reaction time becomes longer, a finer pattern can be obtained than with standard conditions. The reaction time control is also easy owing to the low reaction speed. Another critical step for a fine pattern is drying IPA after the resist development. The N2 gas moves and evaporates the rest of the IPA on the sample. Some amount of IPA does not move, creating randomly distributed islands. If the IPA islands are formed and then evaporated, the sample will be damaged. Therefore, to minimize IPA island formation, strong blowing is better than weak blowing, unless the substrate is broken by the strong air flow. An appropriate power of the sonication is helpful to clearly peel off the thin film. After the lift-off step, it is possible to check whether the thin film clearly peels off or not by using a conventional optical microscope. Fortunately, if any Cr thin film remains on the patterned area, it is possible to remove the residue by an additional sonication process. This is a considerable advantage of the Cr mask, because masks made of other materials, such as gold, are extremely difficult to remove once the residue dries.

EBL is an effective method to fabricate nanoscale structures, but this method suffers from a low throughput, impinging large-scale manufacturing. One way to improve productivity is by making master molds, using EBL, and printing the pattern using the master mold. This method is called nanoimprint lithography. Although the fabrication of the mold using EBL takes a long time, the result is that patterns can be transferred in a short time, using the mold that can be used repeatedly. Moreover, it is also possible to transfer the pattern onto a flexible substrate by modifying the printing processes. 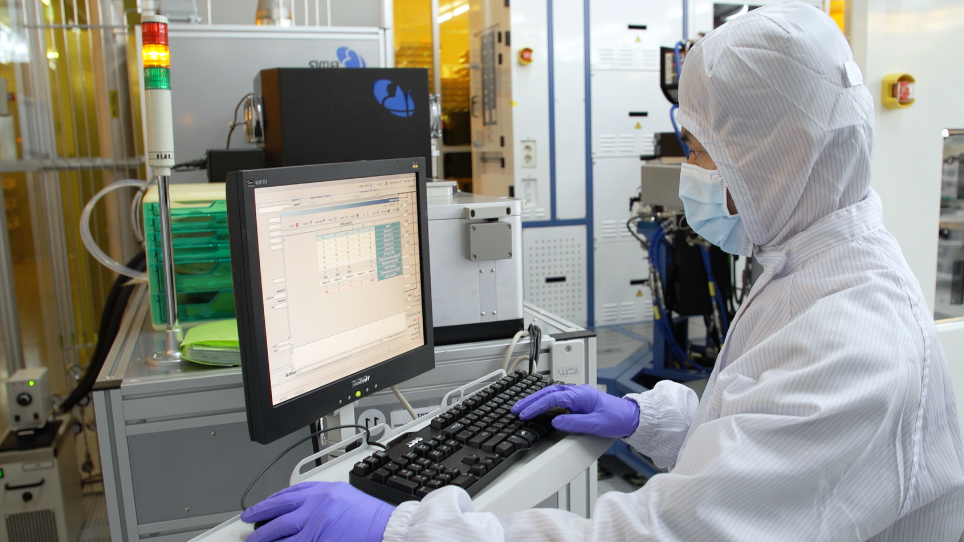