Here, we present a protocol for creating an immunocompetent ICR (Institute of Cancer Research) murine model of central nervous system infection to display the development of neuropathy. Monitoring acute viral encephalitic disorders by identical disease scores could be performed for showing dengue virus-induced neuropathy in vivo.

Dengue virus (DENV), an arthropod-borne virus transmitted by mosquitoes, may cause the severe disease known as dengue hemorrhagic fever, which is characterized by lethal complications due to plasma leakage, ascites, pleural effusion, respiratory distress, severe bleeding, and organ impairment. A few cases of DENV infection present neurological manifestations; however, studies have not explored DENV-induced neuropathogenesis further. In this study, we present a protocol to use an immunocompetent outbred ICR (Institute of Cancer Research) mouse for investigating the induction of central nervous system (CNS) infection with DENV, followed by the progression of acute viral encephalitis-like disease.

DENV, an arthropod-borne virus of the Flaviviridae family, contains a positive-sense RNA genome that encodes three viral structural proteins (capsid, premembrane, and envelope) and seven viral nonstructural proteins (NS1, NS2A, NS2B, NS3, NS4A, NS4B, and NS5). The four serotypes of DENV (DENV1-4), which infect approximately 390 million people annually, cause a global burden even though governments have directed substantial efforts toward mosquito vector and disease control1. Currently, protective vaccines and therapeutic antiviral drugs are under development and require further long-term validation2. In clinical practice, although a dengue patient with CNS infection is rare, it needs to be further explored to understand the diversity of dengue disease development3. Further investigation and validation are needed; notably, the World Health Organization (WHO) has included the involvement of CNS impairment, such as cognitive impairment, convulsions, encephalopathy, and encephalitis, in the classification of severe dengue3,4. Constructing animal models of DENV infection is indispensable for exploring the neuropathogenesis of DENV infection.

Based on our current findings9,10,11,12,13,14,15, we have created a murine model of DENV infection as an in vivo platform to examine the therapeutic efficacy of targeted agents/factors against viral replication, as well as neurotoxicity. Here, we report the protocol utilized to create an immunocompetent outbred ICR mouse to study CNS infection and to monitor the development of neuropathies with different severities caused by DENV. The results show the significant progression of encephalitis-like disease in DENV-infected mice in a time-dependent manner.

Experimental protocols of animal study were approved by the Institutional Animal Care and User Committee of the National Defense Medical Center (IACUC number: 16-261), according to guidelines established by the Ministry of Science and Technology, Taiwan.

Severe dengue-associated neurological complications have been reported in patients for dengue pathogenesis4. Although these cases are rare in the clinic, creating an immunocompetent murine model of DENV infection can be used not only for studying immunopathogenesis but also for exploring CNS infection, neuroinflammation, neurotoxicity, and acute viral encephalitis-like disease. In this study, according to our current model9,10,11,12,13,14,15, 7 day-old ICR suckling mice were inoculated concurrently with DENV2 through an intracerebral microinjection (2.5 x 105 PFU) and an intraperitoneal injection (7.5 x 105 PFU) (Figure 1). Following infection, we performed numerous analyses to show the presence of dsRNA replication, viral protein expression, and virus release in the DENV-infected brain9,10,11,12,13,14,15. These experiments demonstrated that a successful in vivo model of DENV infection, replication, and release has been established. 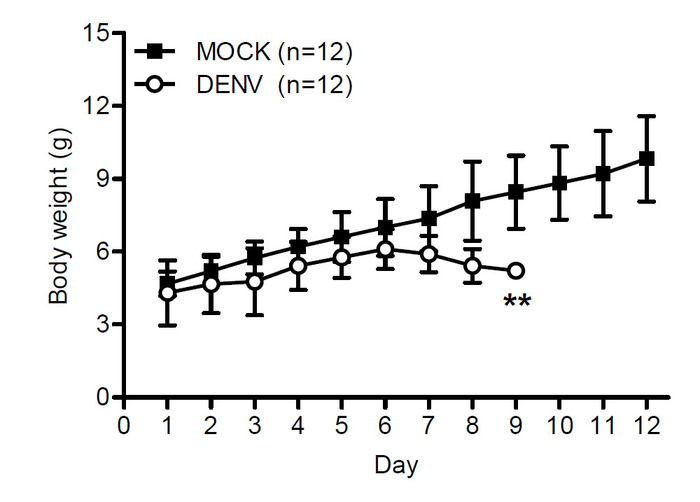 Figure 2: The body weight in suckling mice during dengue virus (DENV) infection. In DENV2-infected ICR suckling mice (n = 12), changes in body weight were measured per day. Following a Wilcoxon signed-rank test, the values are presented as the mean ± SD. **p < 0.01. Please click here to view a larger version of this figure. 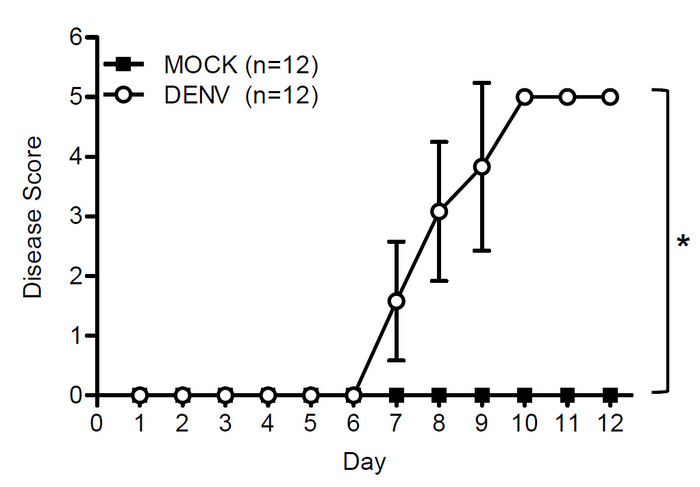 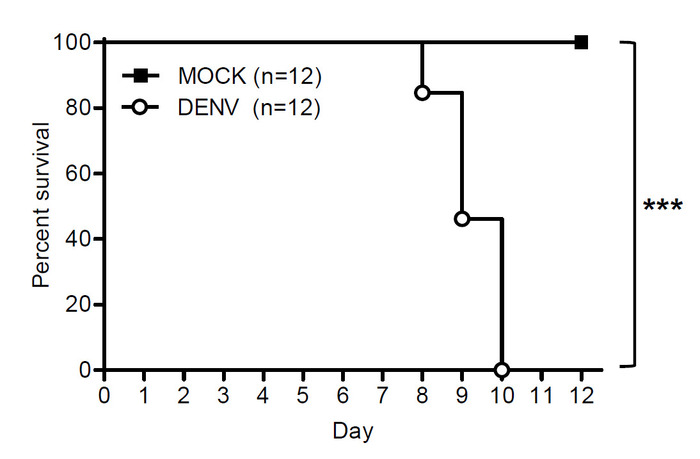 Figure 4: The survival rate in suckling mice during dengue virus (DENV) infection. Time-kinetic changes in survival rates were measured in DENV2-infected ICR suckling mice (n = 12). Following a log-rank test, the values are presented as the mean ± SD. ***p < 0.001. Please click here to view a larger version of this figure.

DENV infection has been detected in the CNS of severe dengue patients3,17, suggesting the possibility of the manifestation of acute viral encephalitis occurred during dengue pathogenesis. Here, we report an in vivo murine model of DENV infection for studying the involvement of CNS dysfunction in severe dengue, particularly with a focus on DENV-induced acute viral encephalitis-like illnesses. As compared with the previous models, particularly for one-route infection (intravenous only, intraperitoneal only, or intracerebral only), an extremely high titer (1 x 108 PFU) of DENV is utilized in immunocompetent mice. However, in immunocompromised mice, a relatively low but variant titer (1 x 105 to 1 x 108 PFU) of DENV can be performed18,19,20. In this study, we used two-route infection to induce concurrent CNS and systemic infection with a low titer (intracranial: 2.5 x 105 PFU; intraperitoneal: 7.5 x 105 PFU) of DENV in immunocompetent ICR suckling mice. The progression of encephalitis-like disease is completely reproducible9,10,11,12,13,14,15. The possible limitation of this study is, therefore, mitigated by using a concurrent intracranial and intraperitoneal injection. Although it is artificial-however, consistent with previous works by others5,6,7,8 and us9,10,11,12,13,14,15-DENV is actively replicated in the experimental murine brain9,10,11,12,13,14,15, and the possible effects of viral factors and host responses on neuroinflammation, as well as neurotoxicity, are, therefore, of interest.

For neuropathogenesis, the stimulation of neuronal cell apoptosis is triggered by DENV infection as well as CNS inflammation, such as microglial cell activation followed by proinflammatory cytokine tumor necrosis factor-α (TNF-α) production8,12,15. Direct neurotoxicity caused by DENV infection and indirect neuroinflammation initiated by host immune responses are speculated to be involved in dengue encephalitis. Acute viral encephalitis is caused by virus-induced CNS inflammation of the brain3,21. Common clinical symptoms are a high fever, headache, stiff neck and back, vomiting, and confusion, while severe cases also develop seizures, paralysis, and coma21. By monitoring the changes in scores with hunchback posture, limbic seizure, limbic weakness, paralysis, and death, the development of these illnesses shows the progression of acute viral encephalitis-like disease in DENV-infected mice9,10,11,12,13,14,15. Generally, those DENV-infected mice with a score of 3 (according to the disease scoring method presented in the protocol) rapidly progressed to paralysis and death. The pathogenic mechanisms causing these illnesses require further investigation; however, it is speculated that neuronal dysfunction followed by neuropathy induction is involved21. Targeting viral replication, as well as TNF-α-mediated CNS inflammation10,11,12,13,14, at least in part, confers therapeutic effects against the progression of dengue-associated acute viral encephalitis-like disease. The protocol of this study could be used for creating an encephalitis-like pathological model of DENV infection.

Some studies have described the induction of intracerebral hemorrhage induced by DENV infection in the brain22,23. We previously showed the induction of BBB disruption in DENV-infected mice9. Although DENV is not recognized as a neurotropic virus, DENV can produce an effective infection in neuronal cells in vivo and in vitro8,11. Dopamine D2 receptor (D2R) is speculated to be a neuronal receptor for DENV infection, and pharmacologically targeting D2R effectively reduces DENV infection in neuronal cells in vivo and in vitro, as well as DENV-induced encephalitic illnesses11,24. Possible therapeutic strategies against acute viral encephalitis are important to develop so that severe dengue cases with neurological complications can be treated. For its future application, this protocol of a disease model using DENV infection in the brain may become an in vivo platform to screen not only the viral and host factors associated with neuropathogenesis but also possible antiviral and anti-encephalitic drugs. Regarding the incidence of variant neurological disorders caused by DENV infection25 by this established protocol, the difference between the variable types and/or strains of DENV for causing neurological dysfunction is needed for validation. 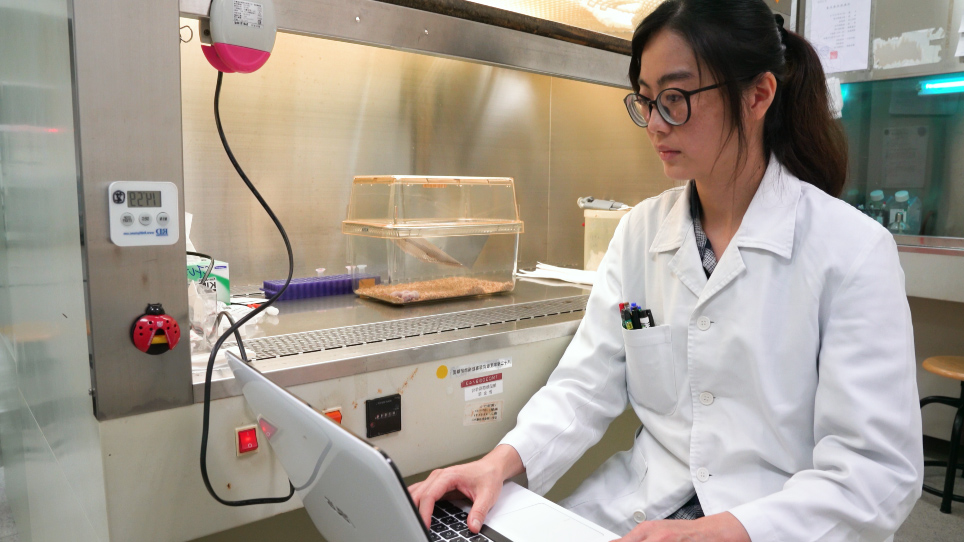