Pancreatic islets comprise of endocrine cells with distinctive hormone expression patterns. The endocrine cells show functional differences in response to normal and pathological conditions. The goal of this protocol is to generate high-quality, large-scale transcriptome data of each endocrine cell type with the use of a droplet-based microfluidic single-cell RNA sequencing technology. Such data can be utilized to build the gene expression profile of each endocrine cell type in normal or specific conditions. The process requires careful handling, accurate measurement, and rigorous quality control. In this protocol, we describe detailed steps for human pancreatic islets dissociation, sequencing, and data analysis. The representative results of about 20,000 human single islet cells demonstrate the successful application of the protocol.

To generate high quality, large-scale transcriptome data of each endocrine cell type, we applied microfluidic technology to human islet cells. The microfluidic platform generates transcriptome data from a large number of single cells in a high-throughput, high-quality, and scalable manner23,24,25,26,27. In addition to revealing molecular characteristics of a cell type captured in a large quantity, highly-scalable microfluidic platform enables identification of rare cell types when enough cells are provided. Hence, application of the platform to human pancreatic islets allowed profiling of ghrelin-secreting ε-cells, a rare endocrine cell type with little known function due to its scarcity28. In recent years, several studies have been published by us and others reporting large-scale transcriptome data of human islets using the technology29,30,31,32,33. The data are publicly available and useful resources for the islet community to study endocrine cell heterogeneity and its implication in diseases.

Here, we describe a droplet-based microfluidic single-cell RNA sequencing protocol, which has been used to produce transcriptome data of approximately 20,000 human islet cells including α-, β-, δ-, PP, ε-cells, and a smaller proportion of non-endocrine cells32. The workflow starts with isolated human islets and depicts steps of islet cell dissociation, single-cell capture, and data analysis. The protocol requires the use of freshly isolated islets and can be applied to islets from humans and other species, such as rodents. Using this workflow, unbiased and comprehensive islet cell atlas under baseline and other conditions can be built.

Cell count and viability need to be determined before the single-cell capture step. Cells with low viability or high debris are not suitable for further processing. A good cell concentration usually ranges from 400 to 500 cells/µL. Approximately 6000 cells were loaded to the microfluidic chip in the single-cell partitioning step, and 100 μL of gel beads in emulsion were removed from the chip. Figure 3A exemplifies a successful example of emulsion following the partitioning step. The liquid in each pipette tips is uniform pale cloudy with minimal partitioning oil separated from the gel beads. In contrast, Figure 3B shows a poor-quality emulsion with clear phase separation between the gel beads and oil. This could be due to a clog during the chip run.

Following single cell partitioning, cDNA amplification was performed. Figure 4A illustrates a representative fragment size distribution after cDNA amplification. The typical peak for a good quality cDNA sample resided near 1000-2000 bp. Interestingly, a spike near 600 bp was specific to islet cDNA. The fragment size distribution for the RNA-seq libraries was between 300 and 500 bp (Figure 4B).

After sequencing, we employed a set of read alignment metrics to evaluate single-cell RNA-seq data quality (Table 7). The first three metrics well summarized single-cell sequencing library quality. On an average, 92% of reads were derived from intact cells and 72% of reads were mapped to exons. Out of all exon reads captured in droplets, 90% of them were produced by intact cells and the rest was likely ambient RNAs in cell-free droplets. These alignment metrics suggest good data quality. The ratio between exon reads and UMI was an empirical measurement to evaluate sequencing saturation and usually, 10:1 ratio was a good indicator. Additionally, the number of detected genes (UMI > 0) was a useful feature to characterize different cell types. For human islet cells, the number of detected genes is about 1,900 in each cell.

We sequenced a total of 20,811 islet cells from 12 non-diabetic donors. Expression of more than one hormone was detected in about 6% of the cells. These multi-hormonal cells are most likely doublets because our previous work showed that less than < 0.1% of single islet cells co-expressed more than one endocrine hormone33. We removed all the identified multi-hormonal cells. It is also important to exclude low-quality cells based on total UMI, detected genes, and cell viability33. After these quality control steps, 19,174 remained for further analysis. The clustering analysis revealed 12 cell types: α-, β-, δ-, PP, ε-cells, acinar, ductal, quiescent stellate, activated stellate, endothelial, macrophage, and mast cells (Figure 5). As expected, endocrine cells were the majority (Table 8). The top enriched genes in α-cells (i.e., GCG, TTR, CRYBA2, TM4SF4, TMEM176B) and β-cells (i.e., IAPP, INS, HADH, DLK1, RBP4) are consistent with other studies13,15,16,17,18,20,21,22,29,30,31,33. Interestingly, both α- and β-cells consisted of several subpopulations. Three β-cell subpopulations, Beta sub1, 2, and 3, were similar with small numbers of subpopulation-enriched genes (18 in Beta sub1, 33 in Beta sub 2, and 18 in Beta sub 3). The fourth subpopulation had 488 enriched genes. The small α-cell subpopulation (Alpha sub3) comprised proliferating cells, characterized by enriched expression of MKI67, CDK1, and TOP2A. 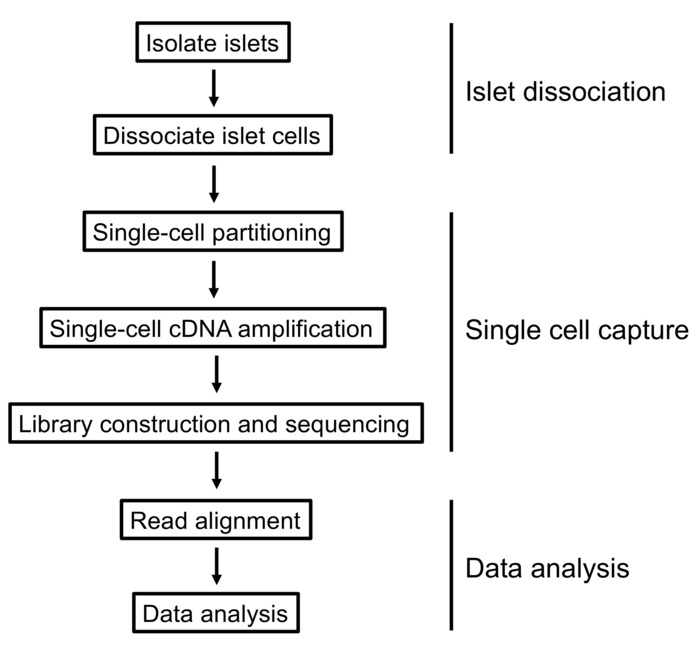 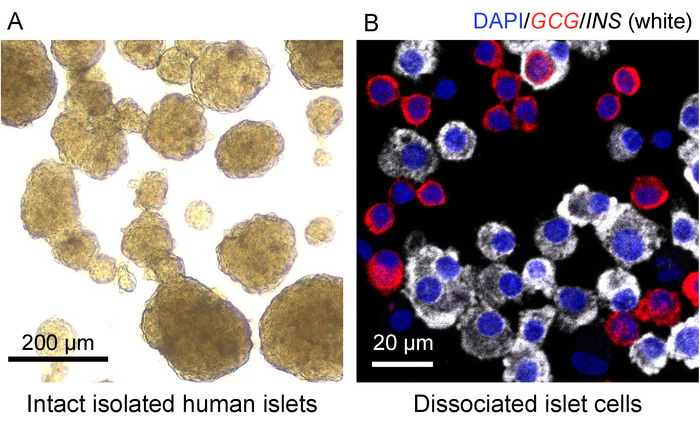 Figure 2: Representative images of intact and dissociated human islets. (A) An image of islets taken after overnight incubation. (B) Dissociated islet cells visualized by RNA-FISH staining for INS (white) and GCG (red). Please click here to view a larger version of this figure. 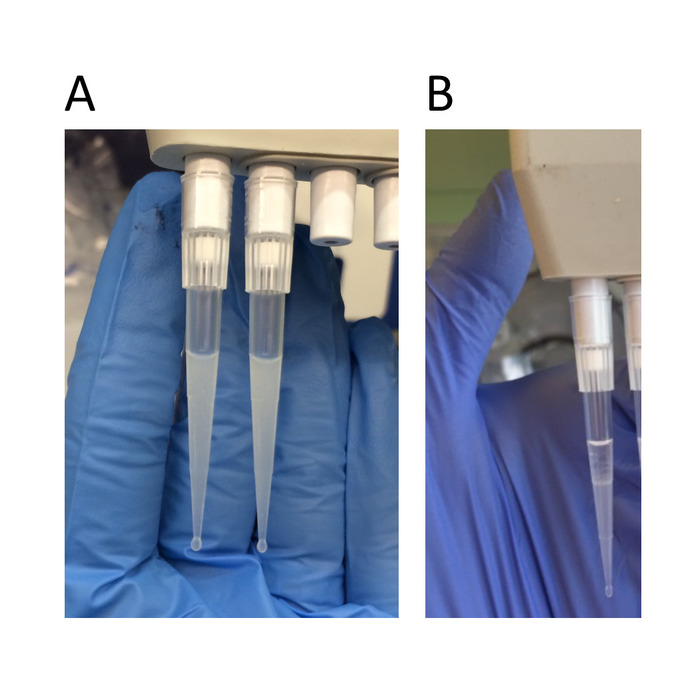 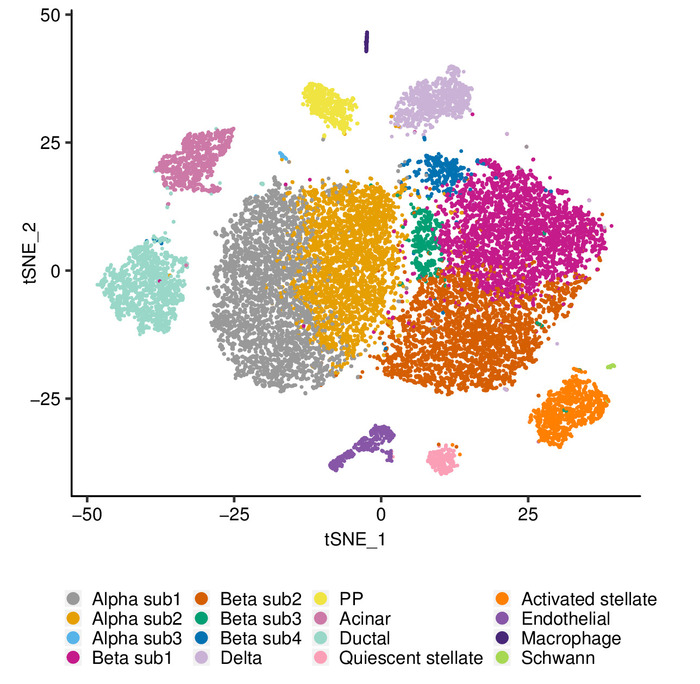 In particular, two steps are critical in this protocol for high-quality outcomes. Caution needs to be taken when dissociating human islets. It is important to not over digest the islets. Single-cell partitioning is another key step for a successful single-cell experiment. We demonstrated examples of good- and poor-quality emulsions in Figure 3. A clear emulsion is usually an indicative of inadequate number of cells being collected in the partitioning step.

The access to isolated primary human islets is a rate-limiting step to generate large-scale human islet single-cell transcriptomes. Isolated islets from individual cadaver donors are usually processed at different times, thus potential sample-dependent batch effects should be carefully examined during data analysis. Integrative analysis can be used to identify common cell types and subpopulations across individual batches41. The batch effect can also be adjusted by batch-corrected expression quantification42. Another challenge to analyze single-cell RNA-seq data is to identify doublets. In the data pre-processing, we took measures to remove endocrine doublets by identifying cells expressing multiple hormone genes (GCG, INS, SST, PPY, and GHRL). Identification of doublets formed by two different cell types is a relatively easy task due to the extremely high expression of endocrine hormones. The real challenge is to identify within-cell-type doublets, e.g., doublets by two α-cells. Because higher UMI and higher number of detected genes are suggestive of potential doublets, one solution is to remove outliers with a high number of genes and UMI during the cell QC step. Additionally, tools to detect doublets are available43,44,45.

A major limitation of single-cell RNA sequencing is low sensitivity. Using spike-in External RNA Controls Consortium (ERCC) RNAs, we estimated that only 10% of all expressed genes were detected using the current protocol and that detected ones were biased toward high abundance genes46. Pancreatic endocrine cells express extremely high-level of hormone genes (i.e., GCG, INS, SST, and PPY). As a result, the mRNAs of these genes have the risk to become ambient RNA. Such background noises cannot be entirely avoided. However, this step-by-step protocol will help researchers minimize undesired experimental noises. The current protocol is designed for freshly isolated tissues. Other technologies, such as single-nucleus RNA sequencing47,48, are available for RNA-seq of fresh, frozen, or lightly fixed tissues. Additionally, a recently developed cell hashing technology49 can be considered as an advanced microfluidic single-cell protocol allowing sample multiplexing.

All authors are employees and shareholders of Regeneron Pharmaceuticals, Inc. 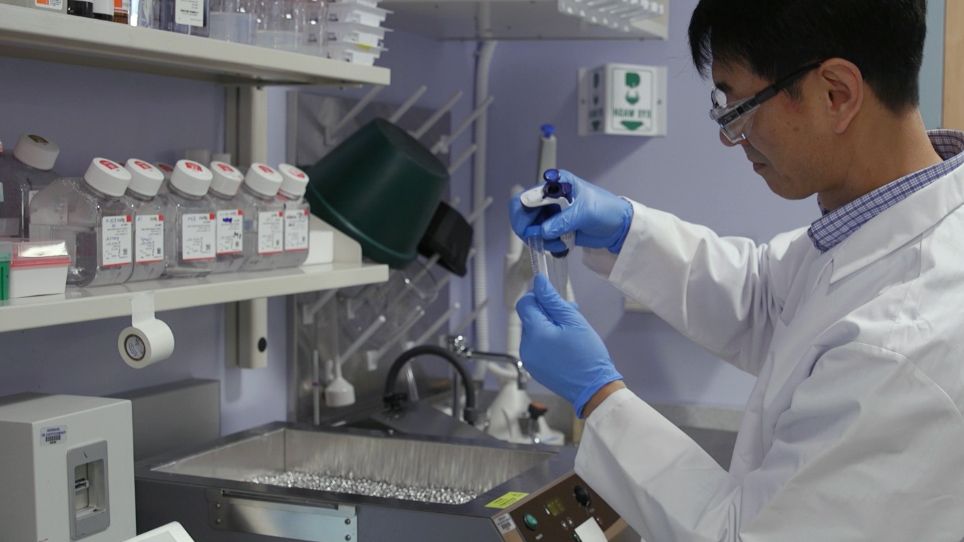