During neuronal development, synapse formation is an important step to establish neural circuits. To form synapses, synaptic proteins must be supplied in appropriate order by transport from cell bodies and/or local translation in immature synapses. However, it is not fully understood how synaptic proteins accumulate in synapses in proper order. Here, we present a novel method to analyze presynaptic formation by using the combination of neuron ball culture with beads to induce presynapse formation. Neuron balls that is neuronal cell aggregates provide axonal sheets far from cell bodies and dendrites, so that weak fluorescent signals of presynapses can be detected by avoiding overwhelming signals of cell bodies. As beads to trigger presynapse formation, we use beads conjugated with leucine-rich repeat transmembrane neuronal 2 (LRRTM2), an excitatory presynaptic organizer. Using this method, we demonstrated that vesicular glutamate transporter 1 (vGlut1), a synaptic vesicle protein, accumulated in presynapses faster than Munc18-1, an active zone protein. Munc18-1 accumulated translation-dependently in presynapse even after removing cell bodies. This finding indicates the Munc18-1 accumulation by local translation in axons, not transport from cell bodies. In conclusion, this method is suitable to analyze accumulation of synaptic proteins in presynapses and source of synaptic proteins. As neuron ball culture is simple and it is not necessary to use special apparatus, this method could be applicable to other experimental platforms.

The experiments described in this manuscript were performed according to the guidelines outlined in the Institutional Animal Care and Use Committee of the Yokohama City University.

NOTE: The procedures described here for the preparation of neuron ball culture are based on the method previously reported by the Sasaki group with some modifications9,10. We also adopted several procedures from the Banker method for dissociated culture14.

NOTE: Before coating of glass coverslips with poly-L-lysine (PLL), washing the coverslips using detergent is important. Glass coverslips are sometimes not so clean for neuronal culture and uniform coating with PLL. Non-uniform PLL coating may result in uneven axonal extension of neuron balls.

3. Applying LRRTM2 beads on neuron ball culture with or without cell bodies (DIV 11-12)

NOTE: Before application of LRRTM2 beads on neuron ball culture, it is recommended to remove cell bodies. Therefore, prepare LRRTM2 beads at first, then remove the cell bodies and later apply LRRTM2 beads to culture as early as possible. Biotinylated LRRTM2 is provided by the Nogi’s group (Yokohama City University) as conditioned medium. They use an expression vector including biotin acceptor sequence and biotin ligase from E. coli (BirA)15,16 to attach biotin to LRRTM2, and the expression vector is transfected to Expi293F cells included in the Expi293 Expression System. The vector information is available in Supplementary Figure 1. Biotinylated LRRTM2-conjugated streptavidin beads reduced background of immunostaining greatly compared to LRRTM2-Fc –conjugated Protein A beads that are used for prototype LRRTM2 system8.

Here, we show representative results of accumulation of presynaptic proteins in LRRTM2-induced presynapses of axonal sheets of neuron ball culture. As presynaptic proteins, we analyzed the excitatory synaptic vesicle protein vGlut1 and the active zone protein Munc18-1. We also examined time course of accumulation of vGlut1 and Munc18-1 in presynapses, and obtained results indicating source of Munc18-1 in presynapses using axons removing cell bodies and a protein synthesis inhibitor. Recently, we have investigated a role of Fragile X mental retardation protein (FMRP) on accumulation of Munc18-1 in presynapses8. FMRP, which is a causative gene product of Fragile X syndrome (FXS), is a mRNA binding protein to suppress translation17,18,19. We also examined the involvement of FMRP in the Munc18-1 accumulation using FXS model mice which is deficient in Fmr1 gene encoding FMRP.

Application of LRRTM2-beads into neuron ball culture at DIV11 induced accumulation of Munc18-1 in presynapses of axons of neuron balls (Figure 2A). Even in axons which are removed cell bodies, accumulation of Munc18-1 was observed under the beads similar as axons of neuron balls with cell bodies (Figure 2B). In typical case, over 80% of beads after 4 h-incubation with neuron balls can induce accumulation of synaptic proteins in presynapses, judged by staining Munc18-1 and vGlut-1. Because axons are so crowded and overlapped near cell bodies (Figure 2Aa, Ba), more peripheral region of axonal sheets were measured where axons are not so overlapped (Figure 2Ab, Bb, e.g., peripheral area away from 2-field of view or more apart from the cell body with microscope (60X)). When peripheral region of axonal sheet was analyzed by high-magnification objective lens (60X), vGlut1 and Munc18-1 accumulated clearly in presynapses of axons under the beads (Figure 3). Sometimes, fluorescent signals of synaptic vesicular proteins like vGlut1 are hard to be detected in axonal region outside the beads, because these synaptic vesicular proteins accumulate so much under the beads. In the case of Munc18-1, fluorescent signals can be detected weakly in axonal region outside the beads.

Representative results presented here demonstrate that this method is suitable to investigate how synaptic proteins accumulate in organized manner by time course experiments, and to examine source of synaptic proteins (transport from cell bodies or local translation in axons) by removing cell bodies. 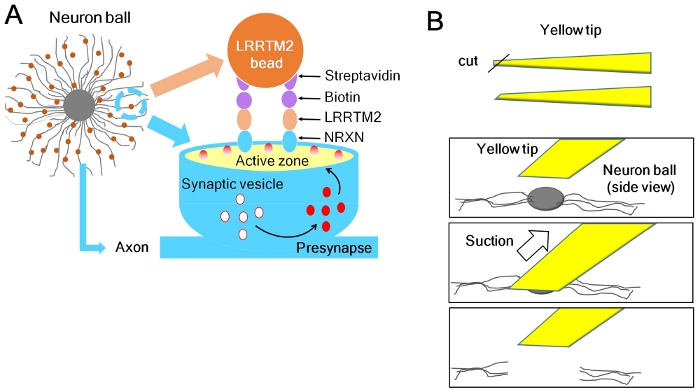 Figure 1. Scheme of presynapse formation and removal of cell bodies from neuron ball.
(A) Presynapse formation assay using biotinylated LRRTM2 conjugated streptavidin beads to induce the presynapses in axons of neuron ball culture prepared from E16 cortices. LRRTM2, a postsynaptic protein, binds neurexin (NRXN) and act as a presynapse organizer. Streptavidin beads conjugated to biotinylated LRRTM2 extracellular regions (LRRTM2 beads) were applied at DIV11-12 to neuron ball culture to induce presynapses. This figure has been modified from previous publication8. (B) The yellow tip end was cut and placed on the cell body area of neuron ball culture at 45° angle. The cell bodies were removed by suction. Please click here to view a larger version of this figure. 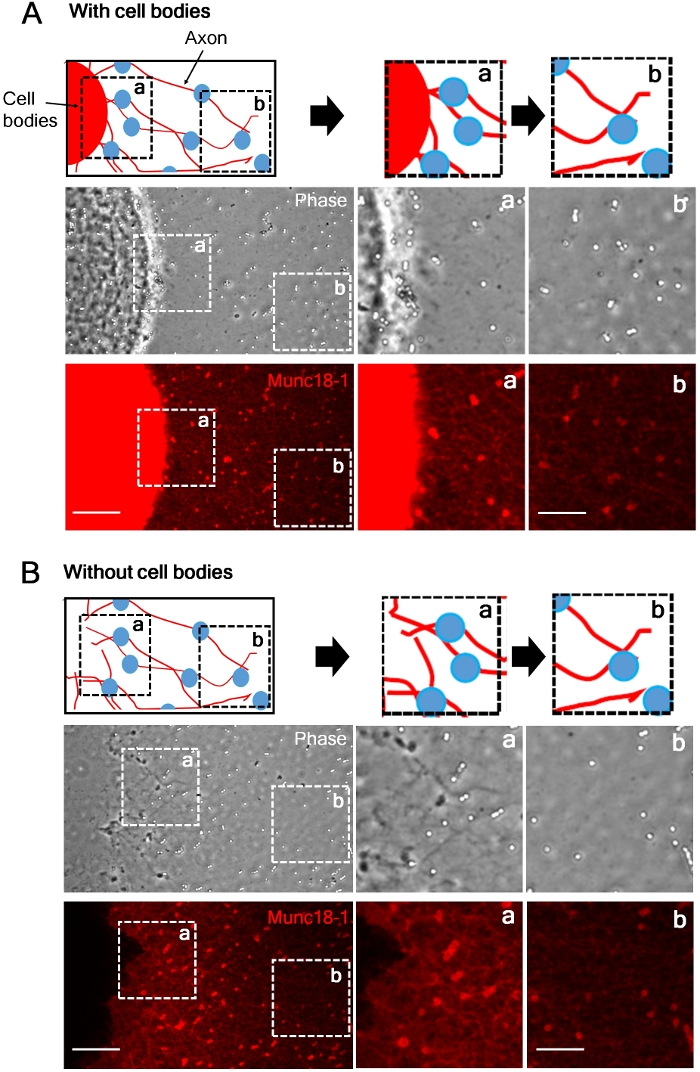 Figure 2. Munc18-1 accumulation in presynapses in presence and absence of cell bodies of neuron ball.
(A) After 4 h incubation with LRRTM2 beads, the active zone protein Munc18-1 accumulated at the induced presynaptic sites in axons (Upper panel; experimental scheme, middle; phase image, lower; IF images of Munc18-1 accumulation). Images were captured as low magnification images using 10X lens and intermediate magnification (1.5X) to see the whole picture composed of a neuron ball, axons, and beads. Dashed squares indicate the area of neuron ball for accurate imaging position of beads. Scale bar, 20 µm (left; original image), 10 µm (right; enlarged image). (B) Munc18-1 accumulated very well even in the absence of cell bodies at the induced presynaptic sites in axons. This result indicates that axons can survive and form presynapses even after removing cell bodies for at least 4 h. Please click here to view a larger version of this figure. 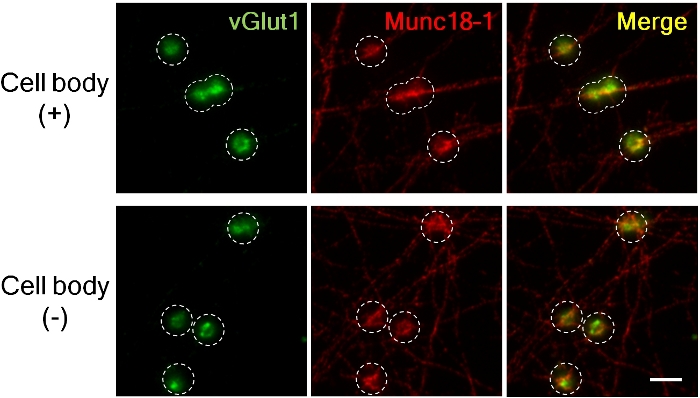 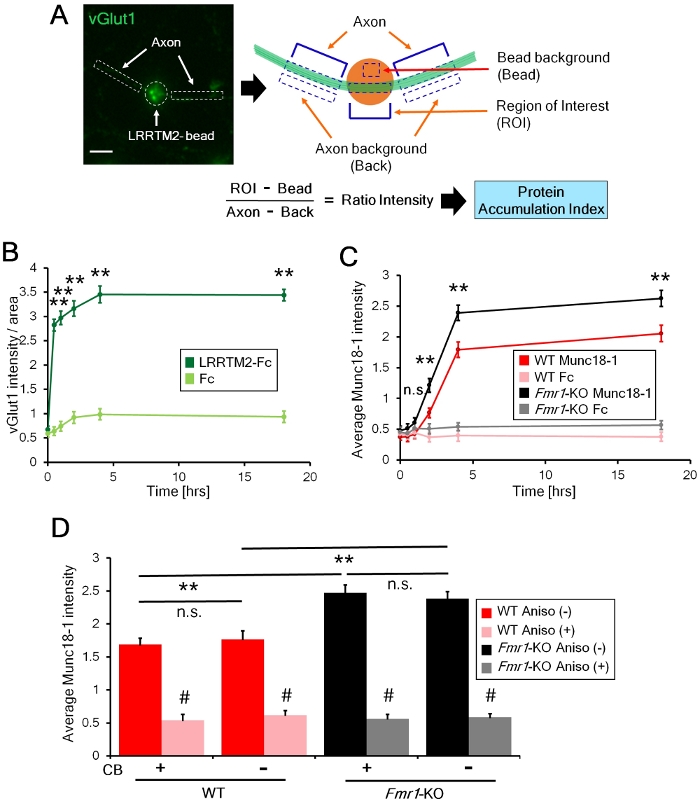 We developed novel method to examine presynapse formation stimulated with LRRTM2-beads using neuron ball culture. Currently, most of presynapse formation assay includes poly-D-lysine (PDL)-coated beads and dissociated culture/microfluidic chamber20,21,22. One of advantages of this method is LRRTM2-beads. While LRRTM2 interacts with neurexin to form excitatory presynapses specifically11,12,13, PDL-beads induces both excitatory and inhibitory presynapses nonspecifically20. In this method, other presynapse organizers, whose members are over 10 proteins3, are applicable to induce presynapses by changing extracellular domain of biotinylated protein depending on experimental purpose.

Another advantage is neuron ball culture. In some cases, conventional dissociated culture was used to analyze presynapse formation20. However, dissociated culture is not suitable to analyze low levels of synaptic proteins within presynapses, because overwhelming signals in cell bodies and dendrites interfere signals in presynapses. Instead, some groups use dissociated culture in microfluidic chamber that is special apparatus to culture axons and cell bodies separately in 2 comprtments21,22. Using microfluidic chamber, axonal sheet is formed in axonal compartment, and cell bodies are able to be removed from cell body compartment, similar to neuron ball culture. However, microfluidic chamber is special apparatus, and requires some skills to maintain constant culture condition. Neuron ball culture is not necessary to use special apparatus, and is relatively easy to be introduced as a new experimental method. Because essence of neuron ball culture is just to place neuronal cell aggregates (neuron balls) to glass-bottom dish/chamber, it can be easily combined with other methods. For example, it is considered that neuron ball culture using LRRTM2-beads is applicable for high content screening to measure fluorescence of 10-20 beads area at same time.

Critical step of this protocol is coating with PLL. If PLL coating is not uniform, axons of neuron balls would not extend uniformly in all direction. This disturbs efficient analysis of presynapse formation. We use glass coverslips and glass-bottom dishes, however, glass is sometimes not so clean for neuronal culture and uniform coating with PLL. In this protocol, at first, glass coverslips and glass-bottom dishes are soaked in neutral non-phosphorous detergent for 1-3 overnight, and then washed 8 times with ultrapure water. We use PLL whose molecular weight > 300,000 to reduce its concentration (15 μg/mL) for lower undesirable background. If lower molecular weight of PLL (e.g., 30,000-70,000) is used, higher concentration (100 μg/mL) is necessary to extend axons.

Limitation of this method is that neuron ball culture cannot maintain > DIV15-16. Axons of neuron balls are fragmented after DIV15-16. Fragmented axons do not produce any presynapse after LRRTM2 beads application. Thus, this method is not applicable to analyze mature neurons (> DIV21). However, in most cases11,12,21,22, presynapse formation assay uses younger neurons that are cultured until DIV14. Another limitation is that axons without cell bodies cannot survive over 4 h. We analyzed accumulation of 5 synaptic proteins in presynapses so far, the accumulation of all proteins we checked reached almost plateau within 4 h (unpublished observation). It is considered that synaptic proteins accumulate enough at 4 h to analyze where synaptic proteins are derived from (cell body or axon).

Combination of neuron ball culture with LRRTM2-beads is relatively simple and flexible to adapt many experimental platforms. We have already applied this method to measure presynaptic activity using AM1-43 dye (unpublished observation). This method is considered to be applicable for high throughput screening. Presynapse formation assay is possible to apply high content screening by staining synaptic proteins in presynapses formed under LRRTM2-beads. This method would contribute to find new compounds to cure neurological disease. 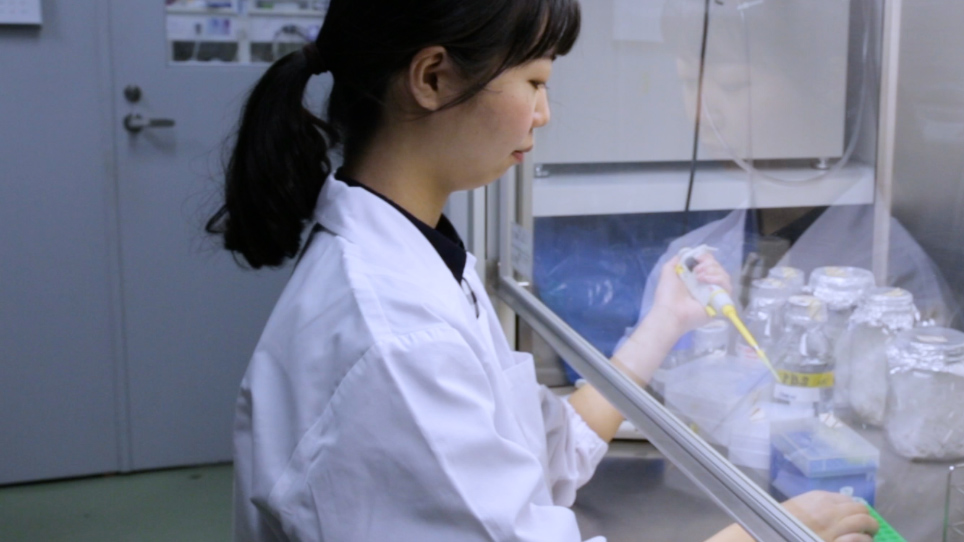