In this report, we describe a simple protocol for studying neurite outgrowth in embryonic rat cortical neurons by co-transfecting with EGFP and the protein of interest.

Neurites, including both axons and dendrites, are the projections from neurons involved in the establishment of the neural networks. The dynamic outgrowth of neurites is essential for neurodevelopment. However, the underlying regulatory mechanisms underneath remain unclear. In particular, neurite damage is often observed in various neurodegenerative diseases and after brain injuries1. Therefore, investigation of the roles of putative molecules in various neurite outgrowth regulatory pathways would improve our understanding of the process. Moreover, it may reveal novel therapeutic targets for various neurological disorders. Neuronal cell lines are valuable models for studying neuronal processes including neurite outgrowth as they are easy to manipulate and transfect2,3. However, genetic drift has been reported to occur in some commonly used cell lines, which could lead to variations in their physiological responses4. Moreover, differential protein expression has been shown between neuronal cell lines and primary neurons. For instance, PC12, a neuronal cell line derived from rat adrenal gland that is widely used for studying neurite outgrowth2,3, does not express NMDA receptors5. Furthermore, it has been proposed that the reduced responsiveness of the mouse neuroblastoma line neuro-2a to neurotoxins in comparison to primary neurons is due to the lack of expression of certain membrane receptors and ion channels6. Therefore, primary neurons are a more desirable and representative model for the investigation of neurite outgrowth. However, the use of primary neurons is hindered by their low transfection efficiency7.

Here, we describe a method that involves the co-transfection of the protein of interest (POI) and EGFP to primary rat cortical neurons. The EGFP acts as a morphological marker for the identification of successfully transfected neurons and permits the measurement of neurites. We validated this method by using compounds/molecules that have been reported to modulate neurite outgrowth. Moreover, FE65, a neuronal adaptor protein that has been shown to stimulate neurite outgrowth, was used to illustrate this approach8,9. This protocol involves (1) the isolation of primary cortical neurons from embryonic day 18 (E18) rat embryos, (2) the co-transfection of neurons with EGFP and the POI (FE65 in this study) and (3) the imaging and analysis of the neurons by using the image processing software ImageJ with the NeuronJ plugin10,11.

All procedures followed were in accordance with the ethical standards of the animal experimentation ethics committee of the Chinese University of Hong Kong.

NOTE: All procedures in steps 3 and 4 are performed inside a Class II Biosafety cabinet.

To test this methodology, we used Cyto D and nerve growth factor NGF, which have been shown to inhibit and stimulate neurite outgrowth respectively14,15,16. The neurite length of neurons transfected with EGFP were measured after treatment with Cyto D or NGF. The transfection efficiency of EGFP to the neurons was 2.7% (1,068 neurons counted). As shown in Figure 1A, Cyto D suppressed neurite extension in a dose-dependent manner. Conversely, neurite outgrowth was potentiated in the neurons treated with NGF (Figure 1B).

We also monitored the effect of gene dosage on neurite outgrowth by transfecting primary rat cortical neurons with different amounts of FE65 plasmid DNA. As shown in Figure 2D, a dose-dependent increase in neurite extension was observed from 0 - 0.5 µg of FE65 plasmid DNA. However, there was no significant difference between neurons transfected with either 0.5 µg or 1 µg of plasmid DNA (Figure 2D). 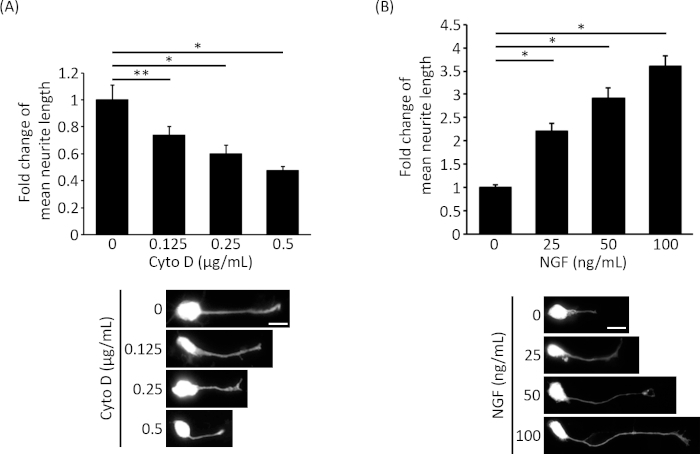 Figure 1: Neurite outgrowth is modulated by Cyto D and NGF. E18 rat cortical neurons were transfected on DIV2 with an EGFP expression vector. 6 h post-transfection, the cells were treated with (A) 0-0.5 µg/mL Cyto D or (B) 0-100 ng/mL NGF for 24 h. Then the neurons were fixed and imaged accordingly. Images were captured with 40x objective using an epi-fluorescence microscope and the length of the longest neurite from the cell body to the tip of the growth cone was measured by using ImageJ with the NeuronJ plugin. Three independent experiments were performed and at least 40 neurons were measured in each group. The bar chart showed the fold change in mean neurite length. Unpaired t-test was adopted for the statistical analysis. *p < 0.001, **p < 0.05. Error bars = S.E.M. Please click here to view a larger version of this figure. 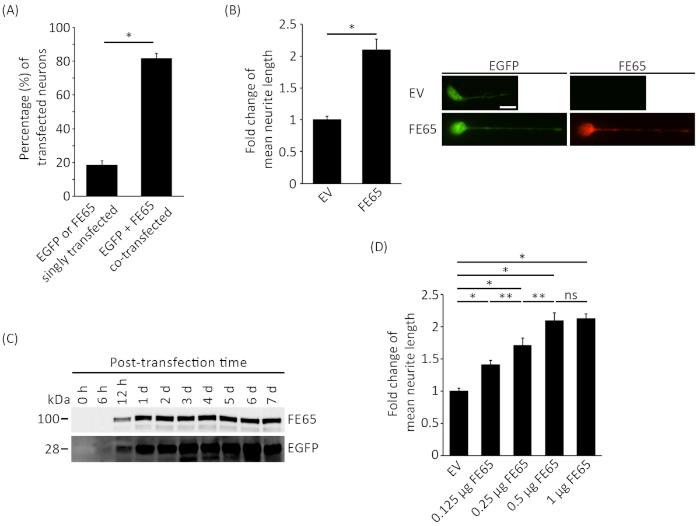 Figure 2: FE65 stimulates neurite outgrowth. E18 rat cortical neurons were transfected on DIV2 with either empty vector control (EV) or FE65 together with an EGFP expression vector. Cells were fixed and imaged 24 h after transfection. (A) The transfected neurons were counterstained with anti-FE65 antibody and the number of cells with EGFP or FE65 singly transfected and EGFP + FE65 co-transfected were counted. Three independent experiments were performed and at least 100 cells were counted in each experiment. Data were expressed as the percentage of cells with EGFP and EGFP + FE65 signals. *p < 0.001. Error bars = S.D. (B) The length of the longest neurite from the cell body to the tip of the growth cone was measured by using ImageJ with the NeuronJ plugin. Representative neuron images were shown in the right panel. FE65 was stained by a goat anti-FE65 antibody as described8,17. Three independent experiments were performed and at least 40 neurons were measured per transfection. The bar chart showed the fold change in mean neurite length. The data were analyzed by unpaired t-test. *p < 0.001. Error bars = S.E.M. Scale bar = 10 µm. (C) Western blot analysis of the expression of levels of EGFP and FE65 at the post-transfection time points as indicated. EGFP and FE65 were detected by mouse anti-GFP and anti-myc (to FE65 C-terminal myc tag), respectively. (D) The average neurite length of neurons transfected with various amounts of FE65 plasmid DNA as indicated. Statistical analyses were performed using one-way ANOVA tests with Bonferroni post-hoc test. *p < 0.001, **p < 0.05. Error bars = S.E.M. Scale bar = 10 µm. Please click here to view a larger version of this figure.

Another advantage of the EGFP-based approach described is that immunofluorescence staining can be omitted. Immunofluorescence staining of Tuj 1, a neuron-specific class III β-tubulin, is widely employed as a morphological marker when studying neurite elongation18,19,20,21. In addition to Tuj 1, staining of the POI is required for the identification of transfected neurons19,22,23. It is known that the consistency of immunofluorescence staining, which is crucial for neurite outgrowth measurement, is affected by many factors including sample preparation and antibodies24. Hence, the overall simplicity of the EGFP-based method could improve the accuracy of the assay.

In our protocol, neurons are fixed for neurite measurement 24 h post-transfection. Thus, neurons are exposed to the transfection reagent for 24 h. It is long known that transfection reagents are toxic to cells25. If the effect of the POI on neurite extension needs to be determined beyond DIV3, fresh medium replenishment may help to minimize the toxicity. Moreover, alternative gene delivery methods may be considered such as Ca2+ phosphate co-precipitation and nucleofection, both of which are shown to have a less toxic effect to cells26. Additionally, we show here that the highest effect of FE65 on neurite outgrowth is observed in the neurons transfected with that 0.5 µg of FE65 and 0.5 µg of EGFP plasmids by using 1 µL of transfection reagent. For other POIs, the optimal amounts of plasmid DNA and transfection reagents should be determined as proteins have widely different turnover rates.

In addition to gene delivery method, cell density is another critical parameter to be considered. If the neuron density is too high, it becomes difficult to identify the origins of neurites as they would overlap with each other. Although plating cells at a low density may resolve the issue, the survival of primary neurons would be significantly reduced at a low cell density27. Primary rat hippocampal neurons have been shown to grow healthily at the density between 40,000 to 100,000/cm2 28. In this protocol, a density of 65,000/cm2 of rat cortical neurons is used. Nevertheless, it is important to determine the appropriate cell density for different types of neurons under different experimental conditions.

The neurite measurement of developing rat primary neurons (i.e. DIV3 neurons) is described here. However, more mature neuronal phenotypes can be observed in neurons beyond DIV329. As the effects of POIs or drugs on neurite extension in mature neurons may be different from the developing neurons, investigation by using neurons from different stages would provide a more comprehensive perspective. It is worth noting that we were still able to observe EGFP expression in the neurons 7 d post-transfection. This may facilitate the study of POIs or drugs on neurite outgrowth in mature neurons.

Human induced pluripotent stem cell (hiPSC)-derived neurons are valuable tools in identification of novel therapeutic approaches. For instance, investigation of neurite outgrowth in these cells could reveal novel targets in neuroregeneration as the use of hiPSC-derived neurons avoids the species differences. Similar to primary rodent neurons, hiPSC-derived neurons are difficult to transfect30, which may reduce the co-transfection efficiency of EGFP and the POI. Hence, the use of polycistronic mammalian expression vectors could ensure that all the transfected cells express the entire set of transfected genes including EGFP and POIs. Additionally, alternative gene delivery methods, such as electroporation, may improve transfection efficiency. Again, cell viability is an issue which needs to be considered when using such gene delivery approaches.

It is known that the rat embryonic brain cortex contains different types of neurons including spiny stellate neurons, bipolar neurons and long-projecting neurons31. While this protocol stated here can reveal the general effect of POIs on neurite outgrowth, it is possible that the same POI may exhibit different responses in different types of neurons. For example, myostatin increases the number of sensory axons but not that of motor axons32. In such a scenario, modification of the protocol is necessary, such as prior isolation of specific types of neurons by flow cytometry. Alternatively, specific neuronal marker antibodies may be used for the identification of the required types of neurons during imaging.

The authors declare that they have no conflicts of interest with the contents of this article. 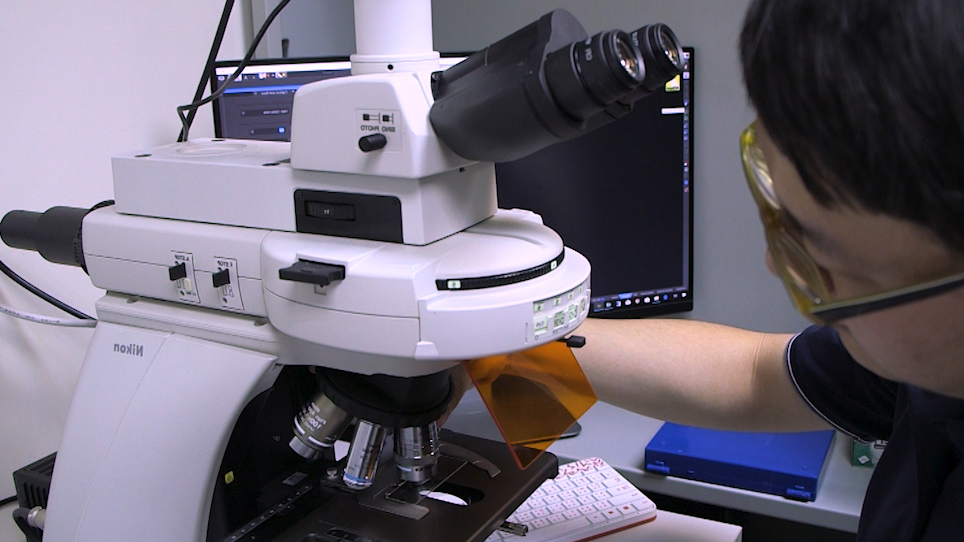