Pre-stimulus oscillatory brain activity influences upcoming perception. The characteristics of this pre-stimulus activity can predict whether a near-threshold stimulus will be perceived or not perceived, but can they also predict which one of two competing stimuli with different perceptual contents is perceived? Ambiguous visual stimuli, which can be seen in one of two possible ways at a time, are ideally suited to investigate this question. Magnetoencephalography (MEG) is a neurophysiological measurement technique that records magnetic signals emitted as a result of brain activity. The millisecond temporal resolution of MEG allows for a characterization of oscillatory brain states from as little as 1 second of recorded data. Presenting an empty screen around 1 second prior to the ambiguous stimulus onset therefore provides a time window in which one can investigate whether pre-stimulus oscillatory activity biases the content of upcoming perception, as indicated by participants' reports. The spatial resolution of MEG is not excellent, but sufficient to localise sources of brain activity at the centimetre scale. Source reconstruction of MEG activity then allows for testing hypotheses about the oscillatory activity of specific regions of interest, as well as the time- and frequency-resolved connectivity between regions of interest. The described protocol enables a better understanding of the influence of spontaneous, ongoing brain activity on visual perception.

Brain states preceding stimuli presentation influence the way stimuli are perceived as well as the neural responses associated with perception1,2,3,4. For example, when a stimulus is presented with an intensity close to perceptual threshold (near-threshold), pre-stimulus neural oscillatory power, phase, and connectivity can influence whether the upcoming stimulus will be perceived or not perceived5,6,7,8,9,10. These pre-stimulus signals could also influence other aspects of perception, such as perceptual object content.

Presenting people with an ambiguous image which can be interpreted in one of two ways is an ideal way to probe object perception11. This is because the subjective content of perception can be one of two objects, while the actual stimulus remains unchanged. One can therefore assess the differences in recorded brain signals between trials on which people reported perceiving one versus the other possible interpretation of the stimulus. Given the reports, one can also investigate whether there were any differences in the brain states prior to stimulus onset.

Magnetoencephalography (MEG) is a functional neuroimaging technique that records magnetic fields produced by electrical currents in the brain. While blood-oxygenation level dependent (BOLD) responses resolve at a timescale of seconds, MEG provides millisecond resolution and therefore allows investigating brain mechanisms that occur at very fast timescales. A related advantage of MEG is that it allows characterizing brain states from short periods of recorded data, meaning experimental trials can be shortened such that many trials fit into an experimental session. Further, MEG allows for frequency-domain analyses which can uncover oscillatory activity.

In addition to its high temporal resolution, MEG offers good spatial resolution. With source reconstruction techniques12, one can project sensor-level data to source space. This then enables testing hypotheses about the activity of specified regions of interests. Finally, while signals in sensor-space are highly correlated and therefore the connectivity between sensors cannot be accurately assessed, source reconstruction allows for the assessment of connectivity between regions of interest because it reduces the correlations between source signals13. These connectivity estimates can be resolved in both the time and frequency domains.

Given these advantages, MEG is ideally suited to investigate pre-stimulus effects on object perception in specified regions of interest. In the present report we will illustrate how to design such an experiment and the MEG acquisition set-up, as well as how to apply source reconstruction and assess oscillatory activity and connectivity.

The described protocol follows the guidelines of the human research ethics committee at the University of Salzburg, and is in accordance with the Declaration of Helsinki.

2. Set up MEG and stimulation equipment

NOTE: Details of MEG data acquisition have been previously described15.

We presented the Rubin face/vase illusion to participants briefly and repeatedly and asked participants to report their percept (face or vase?) following each trial (Figure 1). Each trial was preceded by at least 1 s of a blank screen (with fixation cross); this was the pre-stimulus interval of interest.

Based on previous literature investigating face and object perception with both ambiguous21 and unambiguous22 stimuli, we determined the FFA to be our ROI. We subsequently analyzed the low-frequency (1-40 Hz) spectral components of the FFA source signal and contrasted the spectral estimates from trials reported as 'face' with those from trials reported as 'vase'. A cluster-based permutation test, clustering over the frequencies 1-40 Hz, contrasting spectral power on trials where people reported face vs vase, revealed no significant differences between the 2 trial types. Nevertheless, descriptively, the power spectra showed the expected oscillatory alpha band peak in the range of 8-13 Hz, and to a lesser extent beta band activity in the range of 13-25 Hz (Figure 2).

Having found no differences in pre-stimulus spectral power, we next investigated whether there were differences in pre-stimulus connectivity between the trial types. In addition to FFA, we determined V1 to be our second ROI due to its ubiquitous involvement in vision. Based on the results of the power analysis, we determined the frequencies 8-13 Hz to be our frequencies of interest. We calculated the time- and frequency-resolved imaginary part of coherency between our two ROIs, separately for face and vase trials, and averaged the result across the frequencies of interest. This measure reflects synchrony of oscillatory phase amongst brain regions and conservatively controls against volume conduction effects in MEG reconstructed sources19, so it was the method of choice for assessing functional coupling. A cluster-based permutation test, clustering over the time-points -1 to 0 s, contrasting imaginary coherency between V1 and FFA on trials where people reported face vs vase, revealed that face trials had stronger pre-stimulus connectivity compared to vase trials, around 700 ms prior to stimulus onset (Figure 3). 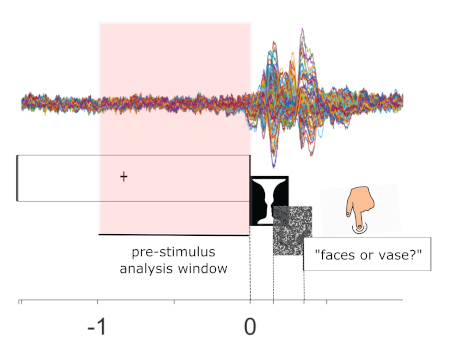 Figure 1: Example trial structure and raw data. Bottom panel: A trial starts with the display of a fixation cross. After 1 to 1.8 s, the Rubin stimulus appears for 150 ms followed by a mask for 200 ms. A response screen then appears to prompt participants to respond with 'face' or 'vase'. Top panel: Multi-channel raw data from an example participant, time-locked to stimulus onset and averaged across trials. This is a schematic to highlight the data in the pre-stimulus analysis window (-1 s to 0 s; highlighted in pink), which will be the target interval for analysis. Please click here to view a larger version of this figure. 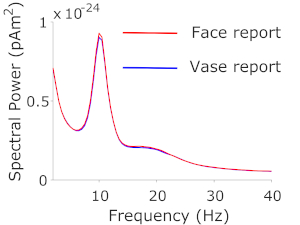 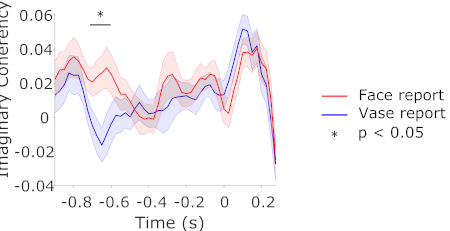 Figure 3: Connectivity between V1 and FFA. Imaginary part of coherency between source-localized V1 and FFA signals on face and vase trials, in the frequency range of 8-13 Hz. Shaded regions represent the standard error of the mean for within-subjects designs23. Please click here to view a larger version of this figure.

Presenting a unique stimulus which can be interpreted as more than one object over time, but as only one object at any given time, allows for investigating pre-stimulus effects on object perception. In this way one is able to relate pre-stimulus brain states to subjective reports of the perceived objects. In a laboratory setting, ambiguous images which can be interpreted in one of two ways, such as the Rubin vase illusion, provide an optimal case which allows for straightforward contrasts of brain activity between two trial types: those perceived one way (e.g., 'face') and those perceived the other way (e.g., 'vase').

Presenting these stimuli briefly (<200 ms) ensures that people see and subsequently report only one of the two possible interpretations of the stimulus on a given trial. Counterbalancing (randomly alternating) between the black vase/white faces and white vase/black faces versions of the stimulus across participants reduces the influence of low-level stimulus features on the subsequent analysis. Presenting a mask immediately after the stimulus prevents after-images from forming and biasing participants' responses. Because analyzing the period after stimulus onset is not of interest, no matching between low frequency features of the stimulus and mask is required. Finally, alternating the response buttons across participants (e.g., left for vase, right for face, or vice versa) prevents activity due to motor preparation from factoring into the contrasts.

Given the millisecond resolution of MEG, a pre-stimulus interval of as short as 1 s is sufficient to estimate measures such as spectral power and connectivity. Given the short duration of each resulting trial, a large number of trials can be accommodated in an experimental session, ensuring a high signal-to-noise ratio when averaging MEG signals across trials.

Specific category-sensitive regions of interest have been shown to be active during object perception24,25. For example, FFA is widely reported to be involved in face perception22. To investigate the effects of measured activity stemming from specific sources, one can source-reconstruct MEG data. To investigate connectivity between sources, source reconstruction is necessary. To facilitate source data analysis, single-trial source-level data can be represented by 'virtual sensors'. Representing the data in this way enables one to analyze single-trial source data in the exact same way in source space and sensor space (that is, using the same analysis functions, for example using the Fieldtrip toolbox). This then enables testing hypotheses about the activity of specified regions of interests in a straightforward manner.

While pre-stimulus oscillatory power has been shown to influence stimulus detection near perceptual threshold (perceived vs not perceived), whether it influences the content of what is seen is less known. Here we contrasted pre-stimulus oscillatory power in FFA between trials on which people reported face vs vase, and found no statistical differences. We subsequently tested whether the connectivity between V1 and FFA influences the upcoming perceptual report, and found that face trials were preceded by enhanced connectivity between V1 and FFA in the alpha frequency range around 700 ms prior to stimulus onset. That we found no effect in alpha power, but rather in connectivity in the alpha band, suggests that while pre-stimulus alpha power might influence stimulus detection7,8, it does not necessarily influence object categorization. Our results therefore show that for a more complete understanding of the oscillatory dynamics preceding object perception and their subsequent influence on object perception, simply analyzing oscillatory power in regions of interest is not sufficient. Rather, connectivity between regions of interest must be taken into account, as the ongoing fluctuations in the strength of these connections can bias subsequent perception18. Finally, despite the less-than-optimal spatial resolution of MEG, our protocol demonstrates that one is able to clearly identify regions of interest and investigate their relationships. MEG can supersede Electroencephalography (EEG) because it offers superior spatial resolution, and can supersede function MRI because it offers superior temporal resolution. Therefore, MEG combined with source reconstruction is ideally suited to investigate fast and localized neural processes.

This work was supported by FWF Austrian Science Fund, Imaging the Mind: Connectivity and Higher Cognitive Function, W 1233-G17 (to E.R.) and European Research Council Grant WIN2CON, ERC StG 283404 (to N.W.). The authors would like to acknowledge the support of Nadia Müller-Voggel, Nicholas Peatfield, and Manfred Seifter for contributions to this protocol. 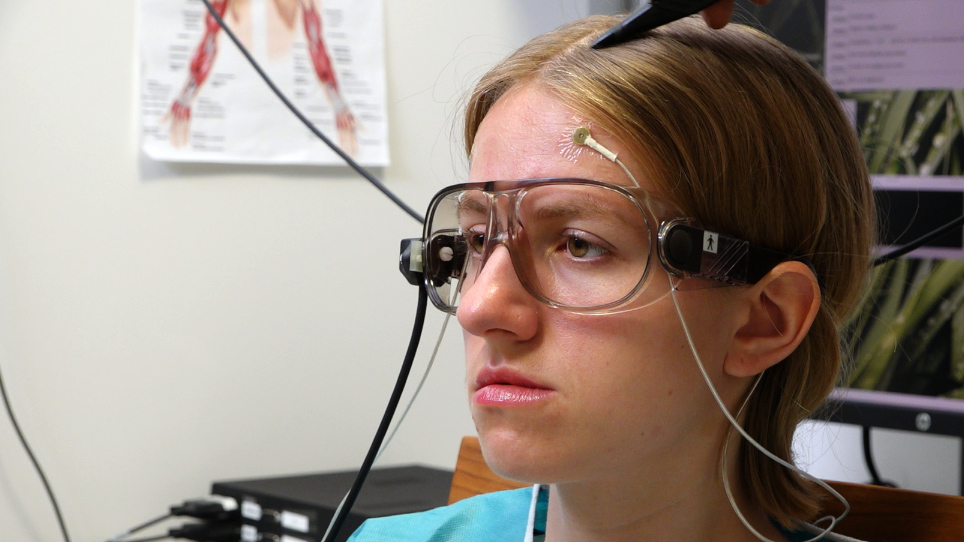