Periosteal skeletal stem cells (P-SSCs) are essential for lifelong bone maintenance and repair, making them an ideal focus for the development of therapies to enhance fracture healing.  Periosteal cells rapidly migrate to an injury to supply new chondrocytes and osteoblasts for fracture healing. Traditionally, the efficacy of a cytokine to induce cell migration has only been conducted in vitro by performing a transwell or scratch assay. With advancements in intravital microscopy using multiphoton excitation, it was recently discovered that 1) P-SSCs express the migratory gene CCR5 and 2) treatment with the CCR5 ligand known as CCL5 improves fracture healing and the migration of P-SSCs in response to CCL5. These results have been captured in real-time. Described here is a protocol to visualize P-SSC migration from the calvarial suture skeletal stem cell (SSC) niche towards an injury after treatment with CCL5. The protocol details the construction of a mouse restraint and imaging mount, surgical preparation of the mouse calvaria, induction of a calvaria defect, and acquisition of time-lapse imaging.

Fracture repair is a dynamic, multicellular process that is distinct from embryonic skeletal development and remodeling. During this process, the induction of injury signals from damaged tissue is followed by the rapid recruitment, proliferation, and subsequent differentiation of skeletal stem/progenitor cells, which are all critical for the overall stability and fixation of fractures1. In particular, early stages of fracture healing require soft callus formation, which is mainly attributed to periosteal resident cells2. When bones are injured, a subset of periosteal cells rapidly respond and contribute to newly differentiated cartilage intermediates and osteoblasts within the callus3, implicating the presence of a distinct skeletal stem/progenitor cell population within the periosteum. Therefore, the identification and functional characterization of the periosteum-resident skeletal stem cells (SSCs) constitute a promising therapeutic approach for degenerative bone diseases and bone defects4.

SSCs are thought to reside in multiple tissue locations, including the bone marrow. Similar to bone marrow, osteogenic/chondrogenic SSCs have also been identified in the periosteum4,5,6.  These periosteal SSCs (P-SSCs) can be labeled with early mesenchymal lineage markers (i.e., Prx1-Cre5, Ctsk-Cre7, and Axin2-CreER8) during fetal bone development4,7,8,9,10. A significant limitation of these single genetic lineage tracing models is that there is substantial heterogeneity within labeled cell populations. Furthermore, they cannot distinguish labeled SSCs from their progeny in vivo. To address this limitation, we recently developed a dual reporter mouse (Mx1-Cre+Rosa26-Tomato+αSMA-GFP+) to distinctly visualize P-SSCs from bone marrow SSCs (BM-SSCs)11. With this model, it has been determined that P-SSCs are marked by Mx1+αSMA+ dual labeling, whereas more differentiated Mx1+ cells reside in the bone marrow, endosteal and periosteal surfaces, and cortical and trabecular bones11,12.

Multiple cytokines and growth factors are known to regulate bone remodeling and repair and have been tested for the enhancement of skeletal repair in critical segment defects1,13. However, due to the cellular complexity of injury models generated through disruption of the bone compartment's physical barrier, the direct effects of these molecules on endogenous P-SSC migration and activation during healing are unclear. The functional characteristics and migratory dynamics of SSCs are often assessed in vitro by performing a transwell or scratch assay, in combination with cytokines or growth factors known to induce migration in other cell populations. Thus, interpretation of results from these in vitro experiments for application in their corresponding in vivo systems is challenging. Currently, in vivo assessment of skeletal stem/progenitor cell migration is not typically observed in real-time; rather, it is measured at fixed timepoints post-fracture5,7,14,15,16.

A limitation of this method is that migration is not assessed at a single-cell level; rather, it is measured via changes in cell populations. Due to recent advances in live animal intravital microscopy and generation of additional reporter mice, in vivo tracking of individual cells is now possible. Using live animal intravital microscopy, we observed the distinct migration of P-SSCs from the calvaria suture niche to a bone injury within 24–48 h post-injury in Mx1/Tomato/αSMA-GFP mice.

CCL5/CCR5 was recently identified as a regulatory mechanism influencing the recruitment and activation P-SSCs during the early injury response. Interestingly, there was no detection of substantial P-SSC migration in response to an injury in real-time. However, treatment of an injury with CCL5 produces a robust, directionally distinct migration of P-SSCs, which can be captured in real-time. Therefore, the objective of this protocol is to provide a detailed methodology for recording the in vivo migration of P-SSCs in real-time after treatment with CCL5.

All mice were maintained in pathogen-free conditions, and all procedures were approved by Baylor College of Medicine’s Institutional Animal Care and Use Committee (IACUC).

Skeletal progenitors have been proposed to have migratory or circulatory potential20. Recently, Mx1-Cre+Rosa26-Tomato+αSMA-GFP+ (Mx1/Tomato/αSMA-GFP) reporter mice were generated, in which P-SSCs are marked by Mx1+αSMA+ dual labeling (Figure 2A,B). Substantial migration of Mx1+αSMA+ P-SSCs occurred out of the suture mesenchyme within 24–48 h post-injury11.  Also tested was the possibility of detecting in vivo P-SSC migration in real-time 24 h after a calvaria defect. Little to no migration of Mx1+αSMA+ P-SSCs was observed within 1 h of imaging (Figure 2C).

Mx1+αSMA+ P-SSCs uniquely express the CCL5 receptor known as CCR511. Thus, treatment of a calvaria defect 24 h post-injury with CCL5 induced directionally distinct migration away from the coronal suture and towards the injury sight (Figure 2D,E). Within 1 h of imaging, one of the Mx1+αSMA+ P-SSCs migrated approximately 50 μm toward the injury (Figure 2E). Other Mx1+αSMA+ P-SSCs were also observed migrating in response to CCL5 treatment but to a lesser extent. 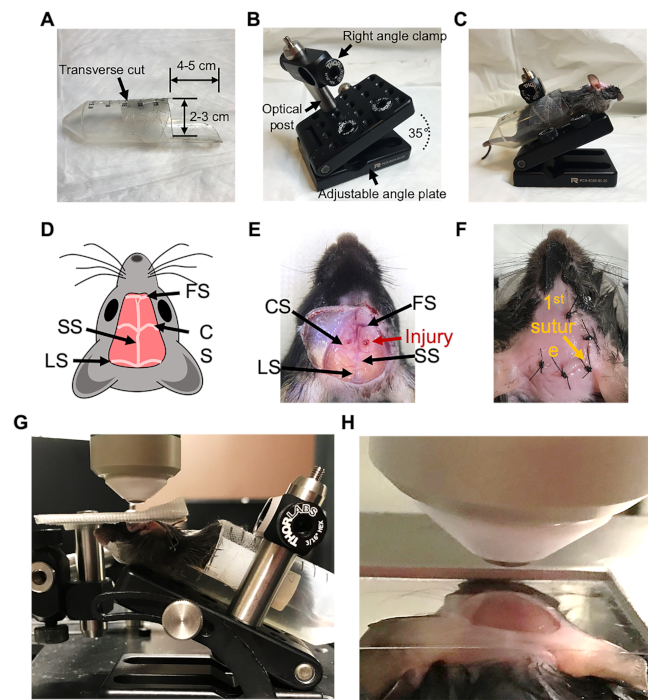 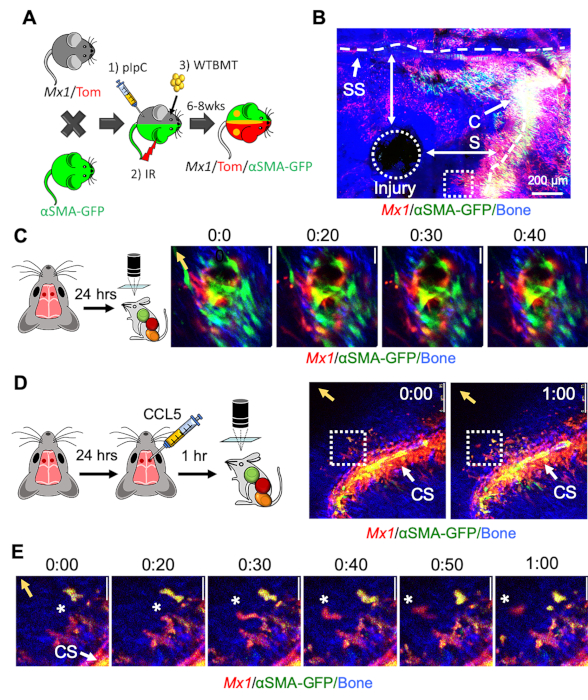 During bone healing, periosteal cells are the main source of newly differentiated chondrocytes and osteoblasts within an injury callus3. Similar to bone marrow, osteogenic/chondrogenic SSCs have also been identified in the periosteum4,5,6. Assessing endogenous P-SSC functional characteristics is technically challenging. Often, migratory dynamics of SSCs are assessed in vitro, making interpretation of their corresponding in vivo systems challenging. Due to recent advances in live animal intravital microscopy and generation of additional reporter mice (Mx1/Tomato/αSMA-GFP), in vivo tracking of individual cells is now possible. Thus, this method allows the in vivo recording of CCL5 induced P-SSCs migration in real-time.

There are several technical challenges associated with this method that can influence imaging consistency. A major technical challenge with this method is maintaining the Z-axis plane of view. Z-axis drift (Z-drift) is a common issue in long-term imaging of fixed and live samples, and it is largely attributed to temperature changes in the imaging environment.  Although this artifact cannot be completely counteracted, covering the stage, objective lenses, and supporting structures helps to reduce Z-drift21.

Furthermore, obtaining a Z-stack series of the imaging location prior to time-lapse imaging will establish a reference of the Z-axis that can be referred to between image acquisitions (i.e., images are typically taken every 30-60 s, which allows time for adjustments to the Z-axis, if necessary). Another technical challenge is making a consistent microfracture that is the same size, shape, and distance from the calvaria sutures. The distance from the coronal and sagittal sutures is critical, because the calvaria sutures are a niche for quiescent SSCs10. The best method to reduce variability of the microfracture is to practice this technique in mice that are not included in the final analysis.

Despite the limitations, this method provides a unique system to assess individual cellular response in vivo to a bone injury. Since fracture repair is a highly complex processes involving multiple cell types, there are several aspects that are not fully understood. One of these includes the early migratory response of P-SSCs toward an injury. While CCR5/CCL5 is a unique mechanism by which P-SSCs are recruited to an injury, it is possible that additional cytokines and growth factors play an important role in fracture healing. Previously, the treatment of fractures with various cytokines and growth factors has resulted in highly variable outcomes in overall fracture healing22. This imaging method provides a unique platform to determine the physiological effects of potential drug/cytokine/growth factor therapies on individual cellular responses. Finally, it provides in vivo mechanistic data that can support a specific therapy’s enhancement of fracture healing.