The mosquito midgut harbors a highly dynamic microbiome that affects the host metabolism, reproduction, fitness, and vector competence. Studies have been conducted to investigate the effect of gut microbes as a whole; however, different microbes could exert distinct effects toward the host. This article provides the methodology to study the effect of each specific mosquito gut microbe and the potential mechanism.

Mosquitoes are considered to be the most important vectors of human pathogenic diseases, transmitting over a hundred pathogens including Zika virus, Dengue virus, and Plasmodium parasites1. When mosquitoes take a blood meal to acquire nutrients for oviposition, they can accidentally ingest pathogens from an infected host via the digestive tract2. Importantly, the mosquito midgut, which plays a pivotal role in both blood meal digestion and pathogen entrance, harbors a highly dynamic microbiome3.

Several studies have characterized lab-reared and field-collected mosquito microbiota using either a culture-dependent method or a bacteria sequencing assay4,5,6. Species including Pantoea, Serratia, Klebsiella, Elizabethkingia, and Enterococcus are commonly isolated from mosquitoes in various studies5,7,8,9. Interestingly, mosquito gut microbiota fluctuates dynamically in both the community diversity and the amount of bacteria species, affected by the development stage, species, geographical origin, and feeding behavior4. Studies show that blood feeding dramatically increases the total bacterial load with rapid expansion of species from Enterobacteriaceae and a reduction in overall diversity10,11. In addition, mosquito gut microbiota of the larval stage is usually eradicated when the insect undergoes metamorphosis during pupation and eclosion; thus, newly emerged adult mosquitoes need to repopulate their microbiota4.

Gut microbiota modulates insect physiology in various aspects, including nutrient absorption, immunity, development, reproduction, and vector competence12. Axenic mosquito larvae fail to develop beyond the first instar while a bacteria oral supply rescues development, indicating that the mosquito gut microbe is essential for larval development13,14. Besides, depletion of gut bacteria retards blood meal digestion and nutrient absorption, affects oocyte maturation, and decreases oviposition15. In addition, mosquitoes with gut microflora elicit higher immune responses compared to antibiotic-treated mosquitoes, with constantly elevated antimicrobial peptide expression against other pathogens to infect16. Antibiotics are usually orally administered to remove pan gut bacteria in these studies, and then experiments are conducted to compare the difference between axenic mosquitoes and mosquitoes with commensal microbes. However, the mosquito midgut harbors a diverse community of microbes, and each bacteria species could exert a distinct effect toward the host physiology.

This procedure provides a systematic and intuitive method for dissection of the mosquito midgut, isolation of cultivable bacteria colonies, identification of the bacteria species, and reintroduction via oral feeding. It provides representative results of blood feeding with a commensal bacterium, Chryseobacterium meningosepticum, on mosquito ovary development and oviposition.

The midguts of mosquitoes treated with antibiotics and without antibiotics were taken out for DNA extraction, and qPCR was performed with universal bacterial primers. Figure 1 shows the expression of bacterial 16S rRNA in the control group and antibiotic treatment group. The results show that about 98% of the gut bacteria have been removed, and the gut sterilization of penicillin and streptomycin was successful.

With the methods described, bacteria strains were isolated and identified. C. meningosepticum is a nonfermenting, oxidase-positive gram-negative aerobic bacillus, belonging to Chryseobacterium. Figure 2 shows the average egg laid per mosquito after blood feeding of antibiotic-treated mosquitoes with C. meningosepticum. Figure 3 shows the expression of ovarian development related genes 24 h after blood meal containing C. meningosepticum. An overview of the ovarian development related genes and primer sequences are listed in Table 1.

The strain isolated from intestinal bacteria from which intestinal bacteria was removed and then the fully engorged mosquitoes were divided into three groups. Five females in the first group and the second group were used to count the spawning amount, and 10 females in the third group were used to detect the gene expression related to ovarian development after 24 h of each female mosquito after feeding, respectively. The results show that there is no significant change in the egg production of the control group and the feeding group. 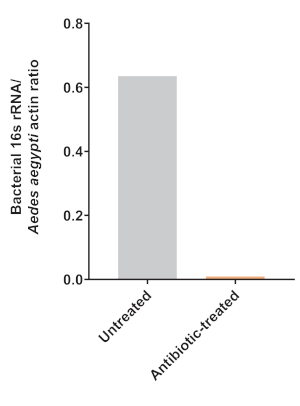 Figure 1: Expression of 16S rRNA after antibiotic treatment. The mosquitoes with untreated antibiotics served as the control group. Please click here to view a larger version of this figure. 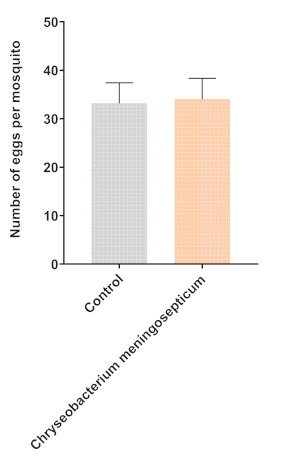 Figure 2: Effect of gut microbe on mosquito oviposition. The indicated bacteria strains were mixed with blood and fed to antibiotic-treated mosquitoes. The mosquitoes with untreated gut commensal microbes served as the control group. The data is presented as mean ± SEM. Please click here to view a larger version of this figure. 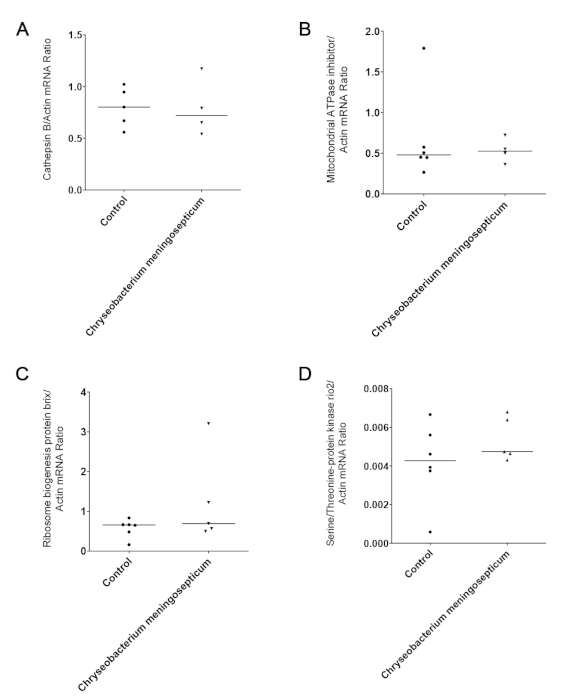 Figure 3: Expression of reproduction related genes after blood feeding. Expression of Cathepsin B (A), Mitochondrial ATPase inhibitor (B), Ribosome biogenesis protein brix (C), and Serine/Threonine-protein kinase rio2 (D) after blood feeding of antibiotic-treated mosquitoes for 24 h with the indicated bacteria strains. The mosquitoes with untreated gut commensal microbe served as the control group. Each dot represents a mosquito and each line represents the median value of the group. Please click here to view a larger version of this figure.

For successful antibiotic treatment, the following details must be considered in conducting the experiment. In this protocol, mosquitoes were treated using cotton balls moistened with a 10% sucrose solution including 20 units of penicillin and 20 µg of streptomycin per mL for 3 days11,16. Penicillin served as a broad-spectrum antibiotic against gram-positive bacteria, and streptomycin served as a broad-spectrum antibiotic against gram-negative bacteria20. Proper preservation of antibiotics is vital for efficient antibiotic treatment21. When stored at -18 °C, the stability of penicillin G is at least 3 m. Streptomycin is stable for at least 12 m when stored at 4 °C22. While differences in antibiotic brand or storage time may cause slight differences in microbial clearance, it is necessary to verify the efficiency after each antibiotic treatment. In addition to the qPCR, spreading the plate or using PCR are commonly used to evaluate the efficiency of antibiotic treatment23,24. Moreover, to prevent mosquitoes from being contaminated with other bacteria after antibiotic treatment, the feeding assay needs to be performed with sterilized equipment assembled under a super clean bench.

Admittedly, this protocol is mainly for investigating the effect of cultivable bacteria. To study the intestinal microbiota of vertebrate and invertebrate host, reintroduction of cultivable bacteria to antibiotic-treated host is commonly used in recent researches8,26,27. In addition, the initial identification of cultured intestinal bacteria is generally based on the characteristics of colony size, shape, color, edge, opacity, height, and consistency28. For non-culturable bacteria, high throughput sequencing-based metagenomic approaches are likely to provide comprehensive information on the total composition of the midgut microbiota29,30,31. However, the interplay between non-culturable bacteria and the host remains largely unexplored.

This article offers two alternative options to study the effect of gut microbe on mosquito oviposition, mix the bacteria with heat-inactivated blood or implantation of the bacteria via sugar feeding followed by blood feeding. The representative results in this manuscript adopted the first option, while the latter method generated similar results. Various studies could be conducted after oral feeding with one specific bacteria strain. Subsequent assay could be used to investigate how microbial factor modulates mosquito locomotor behavior. Protein quantification assay could be followed to study the effects of different bacteria on digestion. With minor modifications, this method could be used to study the respective effects of various microbes toward mosquito physiology, including nutrient absorption, immunity, development, reproduction, and vector competence. 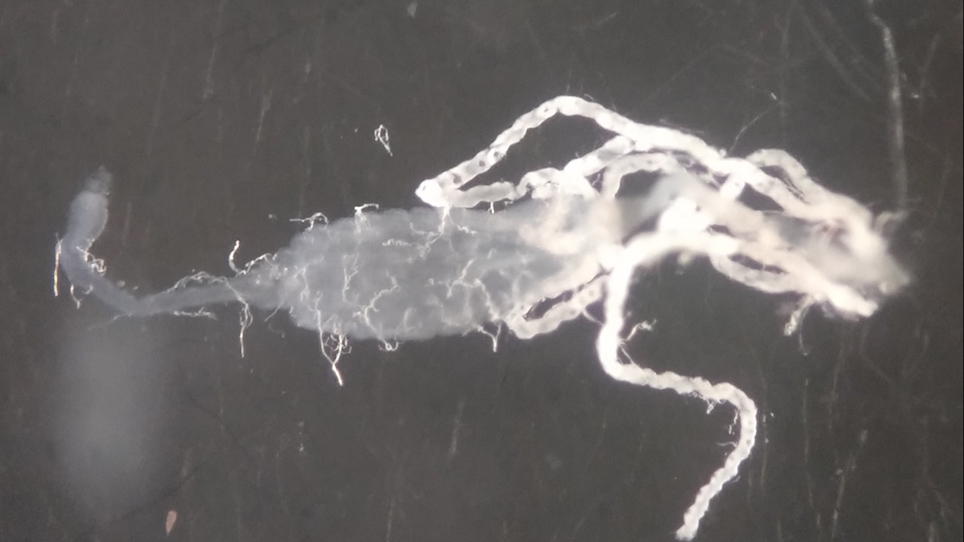