Critical limb ischemia (CLI) represents an advanced stage of the peripheral arterial disease. Angioplasty improves the blood flow to the lower limb; however, some patients irreversibly progress to limb amputation. The extent of vascular damage and the mechanisms of vascular repair are factors affecting post-angioplasty outcome. Mononuclear Progenitor Cells (MPCs) are reactive to vascular damage and repair, with the ability to reflect vascular diseases. The present protocol describes quantification of MPCs obtained from blood circulation from vessel close to the angioplasty site, as well as its relationship with endothelial dysfunction and its predictive ability for limb amputation in the next 30 days after angioplasty in patients with CLI.

Peripheral Arterial Disease (PAD) is characterized by a chronic and progressive vascular obstruction with limitation of blood supply1. At a global scale, PAD of the lower limbs affects around 10% of the elderly population, while up to 7% of such cases are submitted to limb amputation2,3.

Critical Limb Ischemia (CLI) represents the most serious presentation of PAD1. Patients usually experience pain at rest, ulcers, or gangrene attributable to occluded arteries; while clinical prognosis is unfavorable and marked by a 30% risk of limb amputation and mortality during 1 year3,4,5.

Angioplasty is a minimally invasive endovascular procedure that can restore blood flow to the lower limb in patients with CLI; however, some patients will inevitably require major limb amputation, even after angioplasty therapy1,5. Early identification of unfavorable outcomes after angioplasty is quite valuable, due to the possibility of therapy enforcement.

Traditional risk factors may provide a limited predictive ability for major limb amputation in patients with CLI undergoing angioplasty6. Pathophysiology-oriented biomarkers represent novel methods with potential clinical applications, which may result specifically useful in diseases related to vascular injury7. Nowadays, the participation of cellular populations owning endothelial repair properties, at the site of the atherosclerotic plaque, has been increasingly recognized8,9.

Mononuclear Progenitor Cells (MPCs) are derived from the bone marrow and own structural and functional characteristics of stem cells with vascular regenerative abilities. Due to MPC’s ability to proliferate, migrate and show vascular adherence; these cells have become good candidates to reflect endothelial repair in response to ischemia10,11,12. In addition, continuous interest in mechanisms underlying vascular injury has motivated exploring the prognostic role of local occurring biomarkers, since they are considered to reflect vascular damage and repair7,13,14.

The purpose of the present study is to describe how to determine the amount of MPCs that circulate close to the vascular obstruction in patients with CLI undergoing angioplasty; and how to evaluate the relation between MPCs with indicators of endothelial dysfunction and limb amputation.

Compared to the prognosis based on comorbidities and intrinsic vascular features, the amount of local MPCs show specific ability to predict clinical outcome regarding endothelial dysfunction and limb amputation. Consistently, some studies have described the prognostic role of similar biomarkers during the evaluation of patients with PAD15,16.

Based on previous results7, the method described here may be useful for an early identification of population at risk of adverse vascular outcomes in several clinical settings, such as lower limb and coronary ischemia, stroke, vasculitis, venous thrombosis and others involving vascular injury and repair.

NOTE: The study sample used for this experiment comprised of 20 diabetic patients, aged 68 years old and 10 out of 20 were males. Half of the sample were smokers and most prevalent co-morbidities were type 2 diabetes mellitus, systemic arterial hypertension and/or dyslipidemia. The sample was intended to be standardized for age-, sex- and co-morbidities. Possible bias due to clinical-demographic influence on the relation between MPCs and CLI could not be ruled out.

3. Relation of MPCs with modification of endothelial function and hemodynamic test (FMD)

Blood samples from blocked arteries, at the site addressed for angioplasty, were collected from 20 diabetic patients, aged 68 years old and 10 out of 20 were males. Half of sample population were smokers. Vascular lesions were mainly scored as Rutherford class VI; whereas patients showed a higher prevalence of type 2 Diabetes Mellitus (100%), hypertension (70%) and dyslipidemia (55%). 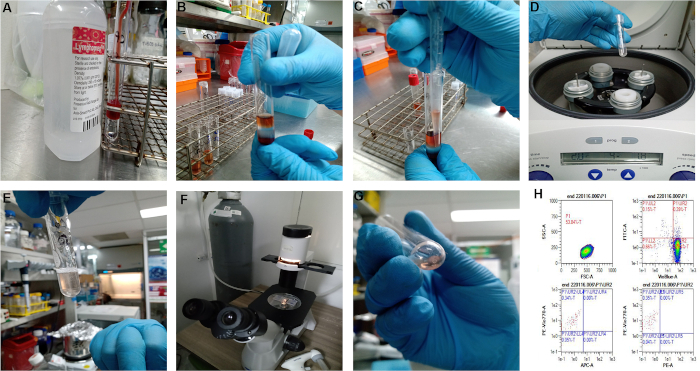 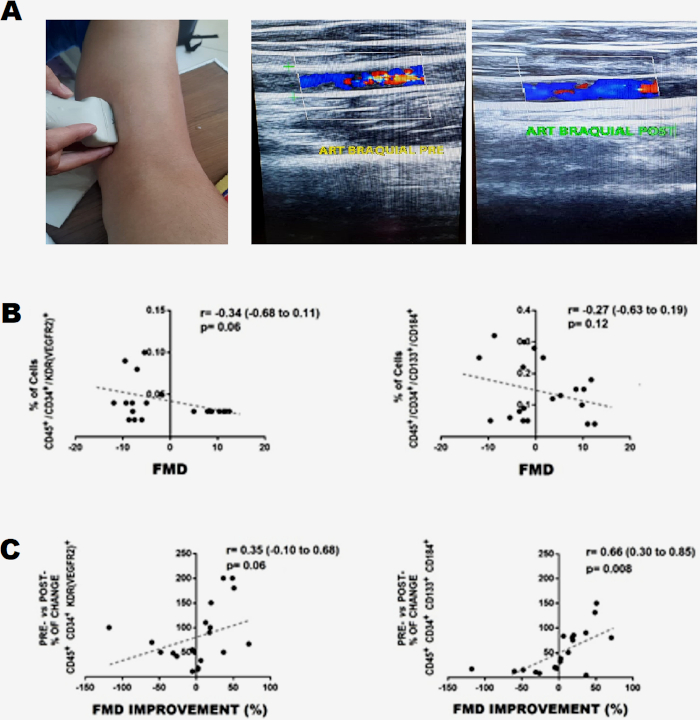 Figure 3: Relation of MPCs with hemodynamic indicators. (A) Position of the ultrasound to acquire FMD and representative results. (B) Relationship between baseline %MPCs subpopulations (left, CD45+CD34+KDR+; right, CD45+CD34+CD133+CD184+) and baseline FMD values; as well as the relation of (C) %MPCs after angioplasty with FMD improvement after angioplasty. Abbreviatures: MPCs, Mononuclear Progenitor Cells; FMD, Flow Mediated Dilation. Please click here to view a larger version of this figure. 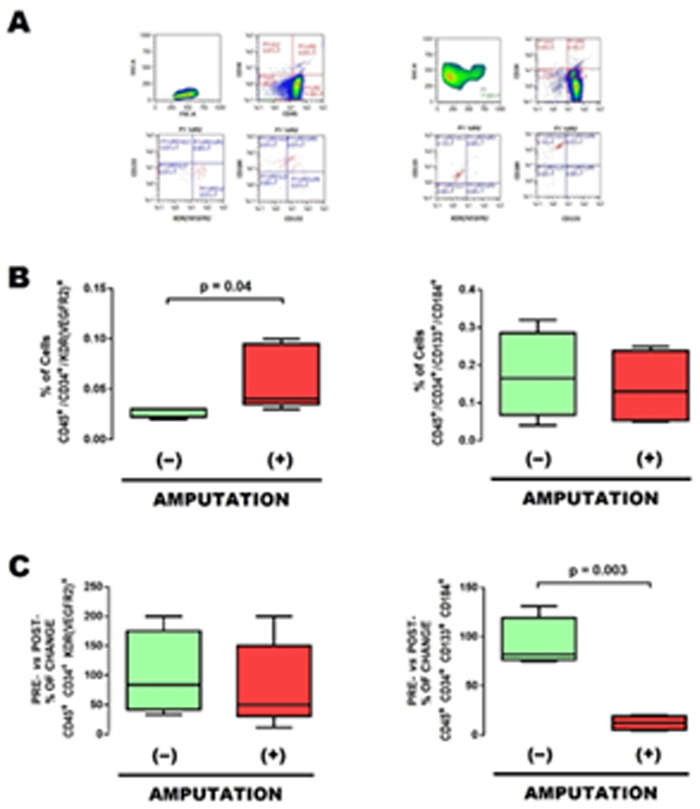 Blood collection at the precise site of the vascular block may show technical difficulties; therefore, we performed blood collection in the proximity to vascular block. Likewise, the amount of MPCs close to the vascular plaque seems to be highly dynamic and may originate variations before and after angioplasty. According to our observations, it is recommended to evaluate baseline- and 30min-post-angioplasty changes in the number of MPCs, since they may reflect several pathophysiological processes occurring within vascular damage and repair.

Blood sample processing for MPCs determination is recommended to be performed within the first 3 h; therefore, adequate organization plan, and even a previous simulation practice, may be established between angiology-vascular surgery team and lab researchers. MPCs isolation should be carefully performed, particularly deposing blood sample into density gradient and washes of the pellet containing MPCs. Our group use to transfer cells into cytometry tube, add primary antibodies, fix, and store cells overnight at 4 °C; due to time-administration convenience, and flow cytometry reading would be performed the day after.

Regarding the role of circulating MPCs as a useful clinical biomarker of vascular damage and repair, important efforts have been reported to standardize immunophenotypes between progenitor cells17. A comprehensive characterization should include subpopulations of circulating progenitor cells participating in the different clinical scenarios within vascular diseases. Using the methods described here, we found that post-angioplasty reduction of MPCs subpopulation CD45+CD34+CD133+CD184+ is predictive for major amputation. This finding supports the notion that inflammatory response during vascular injury or angioplasty stimulate homing signals for MPCs, promoting local tissue repair18,19.

Likewise, the observation is consistent with reported effect of reduced number of CD45+CD34+CD133+ and CD45+CD34+CD133+184+ subpopulations of MPCs as a predictor of adverse cardiovascular outcomes after coronary angioplasty7, which may be explained by the increased ability of less differentiated phenotypes of endothelial progenitors to adhere to extracellular matrix, to proliferate and to respond to vasculogenic stimulus18.

Furthermore, we observed that an increased number of CD45+CD34+KDR+ subpopulation of MPCs after angioplasty was related with limb amputation although they have been considered to contribute to vascular repair. This controversy may be explained due to: 1) variations in the study design, since other studies have compared the number of CD45+CD34+KDR+ MPCs between patients with CLI and healthy controls19; 2) variations in the methods for blood sampling, including the site and the time regarding the angioplasty; and 3) the type of artery blocked and vascularized.

Prognostic characterization of novel biomarkers, based on mechanisms responsible for vascular repair in several diseases, has received significant attention in translational research. This is the first description of a method to explore the role of MPCs, locally determined at a site close to the vascular block, in the prognosis of limb amputation after angioplasty in cases with CLI. One limitation is the lack of MPCs determination at more time points after angioplasty. However, we believe that our findings enrich the field of vascular research by characterizing the translational role of MPCs during vascular damage, repair, and prognostic potential for major amputation in patients with CLI. Particularly, we consider that the method described here may be useful in the prediction of adverse vascular outcomes in clinical settings involving a vascular injury and repair mechanisms, such as lower limb and coronary ischemia, stroke, vasculitis, and/or venous thrombosis.

The authors thank the support of Institutional Program E015 for the project ID 356.2015.