Choroidal angiogenesis dysregulation is associated with neovascular age-related macular degeneration (AMD)1. The choroid is a microvascular bed present underneath the retinal pigment epithelium (RPE). It has been shown that reduced blood flow in the choroid is associated with progression of AMD2. The intricate relationship between vascular endothelium, RPE, macrophages, pericytes and other cells is responsible for the homeostasis of the tissue3,4,5. Therefore, a reproducible assay modeling choroidal microenvironment is critical for the study of neovascular AMD.

Ex vivo angiogenesis assays and in vitro endothelial cell cultures can complement studies of microvascular behavior in vivo, for testing new drugs and for studies of pathogenesis. Endothelial cells such as human retinal microvascular endothelial cells (HRMECs), Human Umbilical Vein Endothelial Cells (HUVEC), isolated primary animal brain or retinal ECs are often used in in vitro studies for ocular angiogenesis research6,7,8. HRMECs in particular have been widely used as a model of in vitro choroidal neovascularization (CNV)9 by assessing endothelial proliferation, migration, tubular formation, and vascular leakage to evaluate interventions6,10. However, ECs in culture are limited as a model of CNV because of the lack of interactions with other cell types found in the choroid and because most EC used in these assays do not originate from choroid. Mouse choroidal ECs are difficult to isolate and maintain in culture.

The aortic ring assay is widely used as a model of macro vascular proliferation. Vascular sprouts from aortic explants include ECs, pericytes and macrophages11. The aortic ring assay models large vessel angiogenesis well12,13,14. However, it has limitations as a model of choroidal neovascularization as aortic rings are a macrovascular tissue lacking the characteristic choroidal microvascular environment, and sprouts from large vessels may differ from sprouts from capillary networks involved in microvascular pathology. Recently a group published an ex-vivo retinal assay15,16. Although, it is suitable for retinal neovascular disease, it is not as appropriate for choroidal neovascularization as seen in AMD.

The choroidal sprouting assay using mouse RPE, choroid, and scleral explanted tissue was developed to better model CNV. The tissue can easily be isolated from mouse (or other species) eyes17. This assay allows reproducible evaluation of pro- and anti-angiogenic potential of pharmacologic compounds and evaluation of the role of specific pathways in choroidal neovascularization using tissue from genetically modified mice and controls18. This choroidal sprouting assay has been referenced in many subsequent publications9,10,18,19,20. Here, the method involved in the use of this assay are demonstrated.

All animal experiments described were approved by the Institutional Animal Care and Use Committee at Boston Children’s Hospital (ARCH protocol number 19-04-3913R).

NOTE: A computerized method to measure the area covered by growing vessels was used. A macro plugin to ImageJ software is needed prior to quantification (see Supplemental Information for further detail).

We dissected the choroid with sclera, embedded in BME and cultured them for 6 days (Figure 1). The choroid sprouting in C57BL/6J mice from day 3 to day 6 were examined with a microscope and quantified with SWIFT-Choroid a semi-automated quantification method in ImageJ. In a representative case, the choroidal sprouting area (the vessels extending from the explant, excluding the explant itself) was 0.38 mm2 at Day 3 (Figure 3A), 1.47 mm2 at Day 4 (Figure 3B), 5.62 mm2 at Day 5 (Figure 3C), and 10.09 mm2 at Day 6 (Figure 3D).

The effects of loss of FFAR4 (also known as G -protein coupled receptor 120) on choroidal vascular sprouting were evaluated using the choroid sprouting assay18. The choroid, RPE, and sclera complex were dissected from Ffar4 knock out (-/-) and Ffar4+/+ mice and cultured as described above. The sprouting area in Ffar4-/- increased choroidal vascular growth compared to Ffar4+/+ at day 6 (p = 0.004) (Figure 4A,B). The treatment of FFAR4 agonist (1 μM) reduced the choroidal sprouting area compared to untreated mice at day 6 (p = 0.03) (Figure 4C,D). 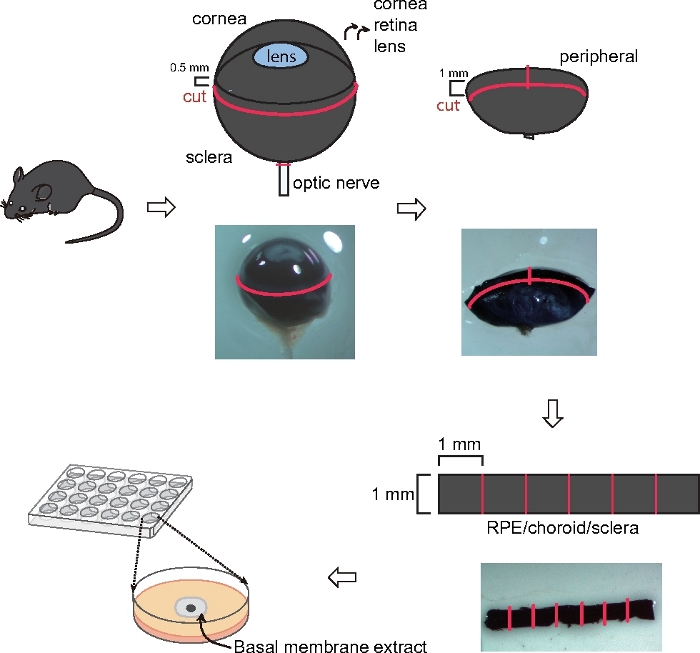 Figure 1: Schematic illustration showing choroid sprouting assay.
Eyes were first enucleated and cut circumferentially about 0.5 mm posterior to the limbus. The cornea, iris, lens and vitreous were removed. Then a 1 mm cut was made from the edge of the eye cup towards the optic nerve. A band was then cut circumferentially about 1.0 mm posterior to the cut edge and the band and the peripheral regions of the complex were separated. The band was cut into approximately 1 mm x 1 mm pieces and embedded in BME. Then using a microscope, the microvascular sprouts from the choroid were visualized. Please click here to view a larger version of this figure.

Figure 2: SWIFT-Choroid computerized quantification method.
(A,B) Magic wand function was used to outline the choroid tissue (white arrow) in the center of the sprouts and it was removed digitally (Shortcut key “F1”). (C, D) The background of the image was removed with the free selection tools (black arrow). Microvascular sprouts were then defined by using the threshold function against the background and periphery. Please click here to view a larger version of this figure. 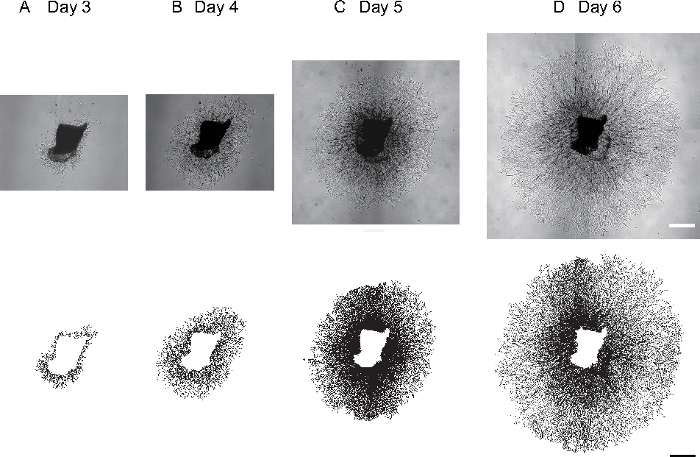 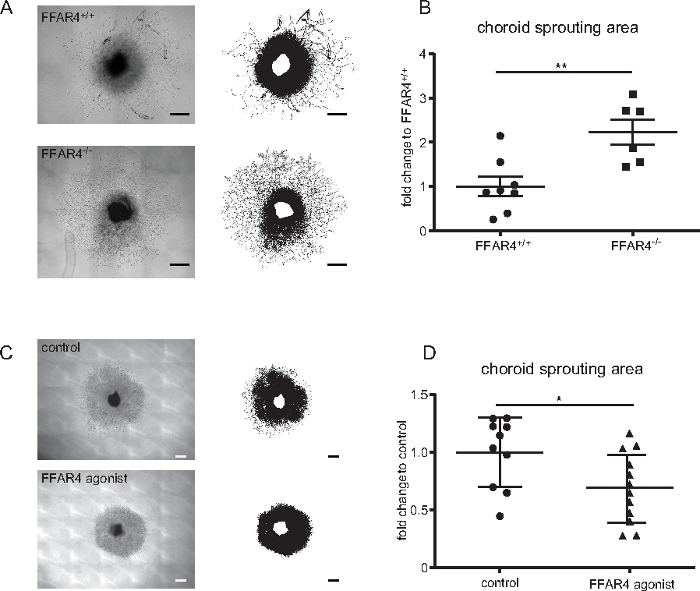 Supplemental File 1: How to create plugins and shortcuts for the choroid sprouting assay program. Please click here to download this file.

The choroidal sprouting assay aids research in neovascular AMD9,10,18,19,20. Choroid explants can be isolated from mice as well as rats and humans17,21. The choroid explant includes ECs, macrophages, and pericytes17. In this assay the interaction between choroidal ECs and adjacent cells such as RPE cells, help elucidate the mechanisms involved in choroidal vascular growth17. Furthermore, this reproducible and semi-automated assessment method decreases interobserver variability17.

The first published study of ex vivo choroidal tissue used isolated choroid to test pharmacological interventions with the potential to treat DR and AMD22,23,24,25. The assay counted the number and length of sprouting vessels, which can be subject to interobserver variability. In contrast, the quantification method described here has been standardized17. This assay of microvascular choroid angiogenesis includes interactive partner cells and extracellular matrix. ECs in culture may lose many of their physiological properties, such as the ability to form vascular tubes26 which may be due to the loss of interaction with other cells such as RPE. Therefore, EC in vitro cultures may not reflect all aspects of choroidal neovascularization. The aortic ring assay includes large vessel endothelial cells and interactive cells to evaluate sprouting from large vessels. But large vessel sprouts may not accurately reflect choroidal microvascular disease27. The choroidal sprouting assay is a closer representation of choroidal microvascular responses.

There are important caveats. First, the peripheral choroid complex explant sprouts are more consistent and grow much faster than explants from the central sections17. Second, the RPE from choroid was not removed because choroid sprouts with RPE grow much faster than without RPE17. To understand the impact of a drug on choroid alone, the assay without RPE may be used. Finally, when outlining the image of choroid tissue and sprouting area by using the magic wand function, it is sometimes difficult to trace the area of choroid sprouting because of high background noise. There can be variation among images. Therefore, for consistency, it is important to digitally create sufficient contrast between choroid and background as seen in Figure 2.

In summary, ex vivo choroid sprouting assay has been characterized and semi-automated. This method provides an experimental tool for AMD research. This assay can be used to screen compounds as potential treatments or to assess pathways involved in proliferating choroidal micro vessels using wild type and genetically modified mouse tissue.

The authors have no financial disclosures. The computerized method is available free of charge to academic institutions through the authors.