Ambient fine particulate matter (PM2.5) exposure can lead to cardiac developmental toxicity but the underlying molecular mechanisms are still unclear. 8-hydroxy-2'deoxygenase (8-OHdG) is a marker of oxidative DNA damage and γH2AX is a sensitive marker for DNA double strand breaks. In this study, we aimed to detect PM2.5-induced 8-OHdG and γH2AX changes in the heart of zebrafish embryos using an immunofluorescence assay. Zebrafish embryos were treated with extractable organic matters (EOM) from PM2.5 at 5 μg/mL in the presence or absence of antioxidant N-acetyl-L-cysteine (NAC, 0.25 μM) at 2 h post fertilization (hpf). DMSO was used as a vehicle control. At 72 hpf, hearts were dissected from embryos using a syringe needle and fixed and permeabilized. After being blocked, samples were probed with primary antibodies against 8-OHdG and γH2AX. Samples were then washed and incubated with secondary antibodies. The resulting images were observed under fluorescence microscopy and quantified using ImageJ. The results show that EOM from PM2.5 significantly enhanced 8-OHdG and γH2AX signals in the heart of zebrafish embryos. However, NAC, acting as a reactive oxygen species (ROS) scavenger, partially counteracted the EOM-induced DNA damage. Here, we present an immunofluorescence protocol for investigating the role of DNA damage in PM2.5-induced heart defects that can be applied to the detection of environmental chemical-induced protein expression changes in the hearts of zebrafish embryos.

Air pollution is now a serious environmental problem facing the world. Ambient fine particulate matter (PM2.5), which is one of the most important indicators of air quality, can carry a large number of harmful substances and enter the blood circulatory system, causing serious harm to human health1. Epidemiology studies have demonstrated that PM2.5 exposure can lead to an increased risk of congenital heart defects (CHDs)2,3. Evidence from animal experiments also showed that PM2.5 can cause abnormal cardiac development in zebrafish embryos and the offspring of mice but the molecular mechanisms of the cardiac developmental toxicity of PM2.5 is still largely unknown4,5,6.

DNA damage can cause cell cycle arrest and induce apoptosis, which may extensively destroy the potential of progenitor cells and, consequently, impair heart development7). It has been well documented that environmental pollutants, including PM2.5, have the potential to attack DNA through oxidative stress mechanisms8,9. Both human and zebrafish cardiac development are sensitive to oxidative stress10,11,12. 8-OHdG is an oxidative DNA damage marker, and γH2AX signal is a marker of DNA double strand breaks. N-acetyl-L-cysteine (NAC), a synthetic precursor of intracellular cysteine and glutathione, is widely used as an anti-oxidative compound. In this study, we use NAC to investigate the role of oxidative stress in PM2.5- induced DNA damage13.

Zebrafish as a model vertebrate has been widely used to study cardiac development and human cardiovascular diseases because mechanisms of cardiac development are highly conserved among vertebrates14,15. The advantages of using zebrafish as a model include their small size, strong reproductive ability, and low feeding cost. Of particular interest to these studies, zebrafish embryos do not depend on the circulatory system during early development and can survive severe heart malformation14. Moreover, their transparency allows the entire body to be directly observed under a microscope. Thus, zebrafish embryos provide an outstanding opportunity for assessing the molecular mechanisms involved in the induction of cardiac developmental toxicity as a result of exposure to various environmental chemicals5,16,17. We have previously reported that PM2.5-induced oxidative stress leads to DNA damage and apoptosis, resulting in heart malformations in zebrafish18. In this study, we provide a detailed protocol for investigating PM2.5-induced DNA damage in the heart of zebrafish embryos.

Wild type zebrafish (AB) used in this study were obtained from the National Zebrafish Resource Center in Wuhan, China. All animal procedures outlined here have been reviewed and approved by the Animal Care Institution of The Ethics Committee of Soochow University.

This immunofluorescence assay is a sensitive and specific method for measuring protein expression changes in the hearts of zebrafish embryos exposed to environmental chemicals.

In this representative analysis, embryos exposed to PM2.5 in the absence or presence of the antioxidant NAC were evaluated for the presence the presence of heart malformations (Figure 1). As observed, EOM from PM2.5 caused a significant increase in cardiac teratogenesis, such as pericardial edema, altered looping, and decreased size, compared to DMSO control-treated hearts. The heartbeat rate was also significantly decreased in embryos exposed to EOM (Figure 1B). The addition of NAC significantly attenuated EOM-induced heart defects (Figure 1).

Here the immunofluorescence assay was used to measure 8-OHdG and γH2AX expression in zebrafish embryo to evaluate the extent of DNA damage in EOM-treated tissues. As shown in Figure 2, the levels of 8-OHdG and γH2AX expression were significantly increased in the hearts of zebrafish embryos treated with EOM group compared to the control, DMSO-treated hearts, indicating an increase in oxidative DNA damage and DNA double strand breaks, respectively. Furthermore, the EOM-induced DNA damage was partially counteracted by NAC supplementation (Figure 2). 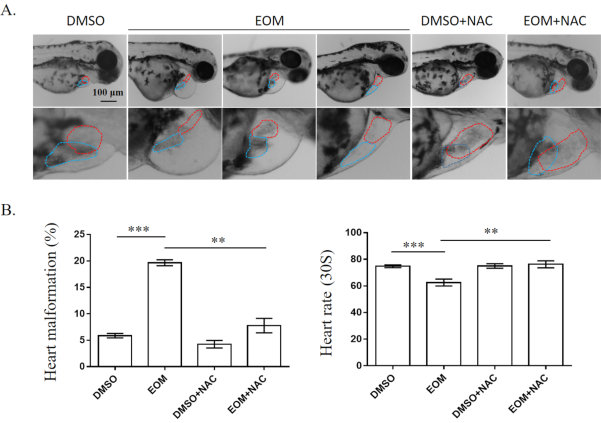 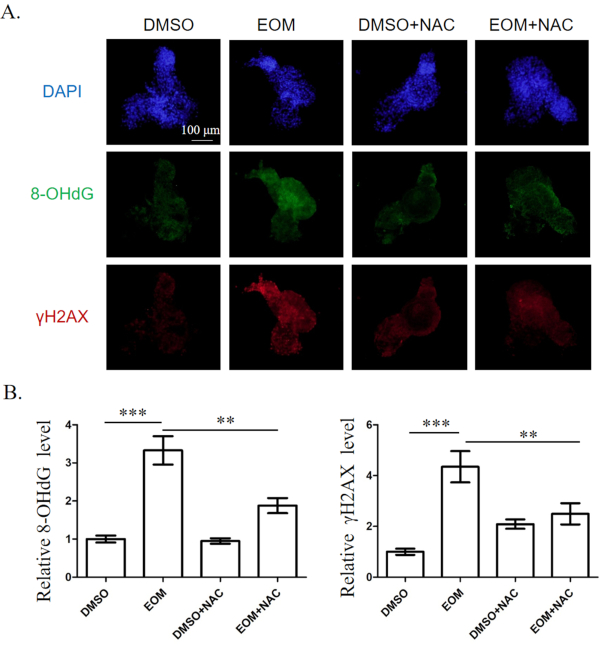 Although zebrafish is an excellent vertebrate model for studying the cardiac developmental toxicity of environmental chemicals, due to the small size of the embryo heart, it is difficult to obtain enough protein for western blot analysis. Therefore, we present a sensitive immunofluorescence method for quantifying the protein expression levels of DNA damage biomarkers in the hearts of zebrafish embryos exposed to PM2.5.

During dissection, it is important to keep the integrity of the heart intact. In our experience, it is relatively easy to perform the isolation at 72 hpf. In addition, the heart needs to be put into fixation solution as soon as possible after collection. Another critical step is drying the samples to make sure that the dissected hearts are completely attached to the glass slide. Otherwise, the samples may be washed off from the slide during labeling.

Dual immunofluorescence staining is performed to detect both 8-OHdG and γH2AX signals in the isolated hearts. This method not only saves labor and allows the use of a reduced sample size, but also facilitates co-localization of the two signals. Although this antibody-based method can not detect fluorescence signals in living embryos, this rapid protocol can be used to detect protein expression in isolated zebrafish embryo hearts.

This work was supported by the National Nature Sciences Foundation of China (Grant number: 81870239, 81741005, 81972999) and The Priority Academic Program Development of Jiangsu Higher Education Institutions.