Acetylated histone proteins can be easily expressed in Escherichia coli encoding a mutant, Nε-acetyl-lysine (AcK)-specific Methanosarcina mazi pyrrolysine tRNA-synthetase (MmAcKRS1) and its cognate tRNA (tRNAPyl) to assemble reconstituted mononucleosomes with site specific acetylated histones. MmAcKRS1 and tRNAPyl deliver AcK at an amber mutation site in the mRNA of choice during translation in Escherichia coli. This technique has been used extensively to incorporate AcK at H3 lysine sites. Pyrrolysyl-tRNA synthetase (PylRS) can also be easily evolved to incorporate other noncanonical amino acids (ncAAs) for site specific protein modification or functionalization. Here we detail a method to incorporate AcK using the MmAcKRS1 system into histone H3 and integrate acetylated H3 proteins into reconstituted mononucleosomes. Acetylated reconstituted mononucleosomes can be used in biochemical and binding assays, structure determination, and more. Obtaining modified mononucleosomes is crucial for designing experiments related to discovering new interactions and understanding epigenetics.

We have utilized PylRS and tRNAPyl to synthesize and assemble reconstituted mononucleosomes with site specific acetylated histones. PylRS has proven invaluable as a genetic code expansion tool to produce proteins with post translational modifications (PTMs) and has been genetically evolved to incorporate about 200 different ncAAs. PylRS incorporates at an amber stop codon, removing competition from other amino acids during translation. PylRS was first discovered in methanogenic archaea, and has since been utilized in chemical biology to incorporate novel reactive chemical groups into proteins1,2.

MmAcKRS1 was evolved from Methanosarcina mazei PylRS and frequently used in our laboratory for the synthesis of acetylated proteins3,4,5,6. MmAcKRS1 delivers AcK at an amber mutation site in the mRNA of choice during translation in Escherichia coli. This technique has been previously used to incorporate AcK at K4, K9, K14, K18, K23, K27, K36, K56, K64, and K79 histone H3 lysine sites to study the activity of Sirtuin 1, 2, 6, and 7 on acetylated mononucleosomes4,5,6. Here we detail this method to express acetylated histones and reconstitute acetylated nucleosomes.

NOTE: A previously designed optimized DNA sequence to direct nucleosome positioning is assembled with histone octamers to produce mononucleosome with high efficiency. This sequence is referred to as 601 DNA or the Widom sequence. This sequence has become the standard DNA sequence for in vitro studies of nucleosomes from chromatin remodeling assays to single molecule measurements10.

Dimers, tetramers, and octamers can be assessed by running a 12% SDS PAGE gel (Figure 1 and Figure 2). Here you can see that some of the acetylated tetramers have a lower yield than others (Figure 1). In fact, the closer to the core region, the lower the yield observed. This is most likely due to the acetylation interfering with the assembling of the tetramer the closer you get to the core regions. A similar affect is observed after assembling octamers (Figure 2). After assembling octamers with 601 DNA sequence, the nucleosome can be assessed using a 5% 1x TBE Native PAGE gel followed with staining with ethidium bromide (Figure 3). Before TEV digestion the nucleosome band is observed near the 10k base pair mark. After TEV digestions the nucleosome band shifts down relative to the ladder. Before thermal positioning, the observed nucleosome bands will be very broad, and possibly streak (Figure 4). 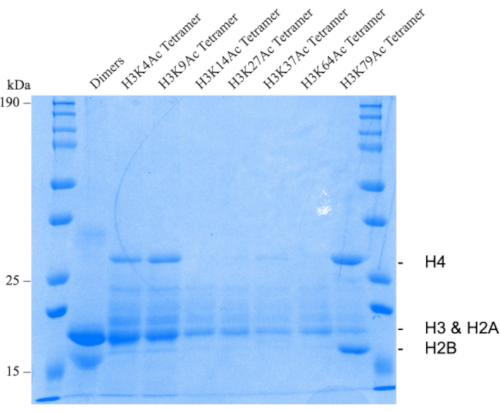 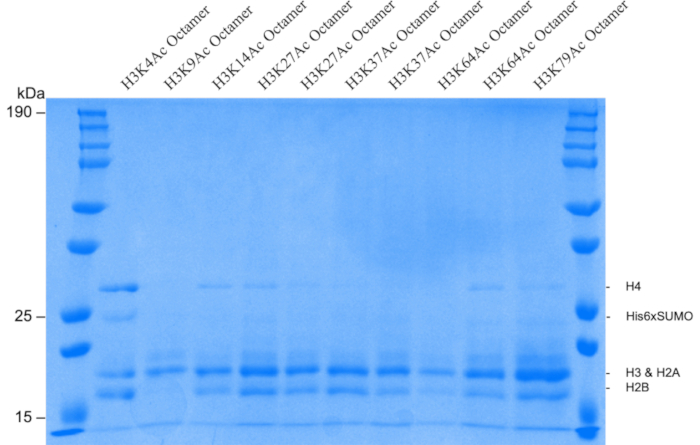 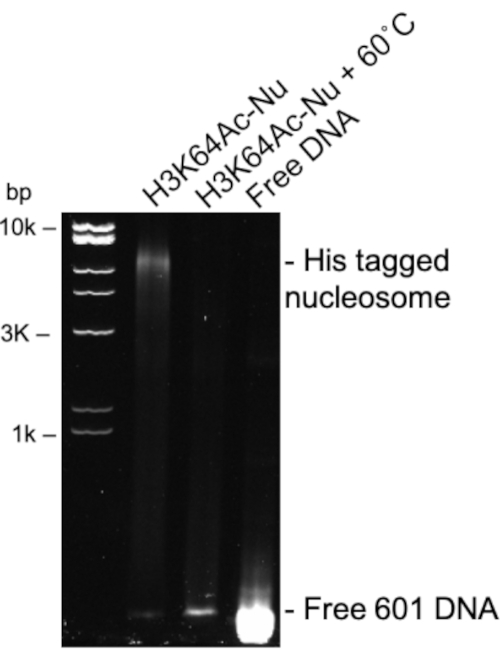 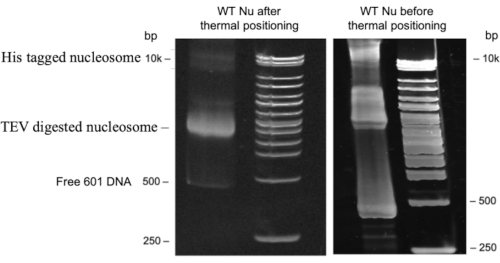 It is essential to follow this protocol in every detail during an experiment. Nucleosomes are not very stable and much trial and error has gone into determining this protocol. It is key to remove precipitates at every step (or whenever observed) because particulates can easily interfere with the assembling processes. Always keep histone samples on ice. If nucleosomes are stored at 4 °C for too long, they can spontaneously disassemble. Be sure to check any samples by Native PAGE if stored at 4 °C for more than 2 weeks before use in any experiment. Avoid vortexing octamers and nucleosomes as this can also cause them to disassemble. If issues are encountered assembling dimers, tetramers, or octamers this is usually indicative of poor protein quality. Check the protein quality by 15% SDS-PAGE. One option if protein purity is low is to dialyze the protein against pure water. This will cause heavy precipitation and greatly reduce protein yield, but will produce a purer sample. The incorporation and nucleosomal stability of each histone acetylation site varies widely. In general, the closer the site is to the N-terminal domain, the lower the yield during histone protein expression. For nucleosome stability, the closer the acetylation site is to the nucleosome core or DNA binding sites, the less stable the assembled nucleosome. If stability issues are encountered, it is crucial to always keep the nucleosome sample on ice. It may be necessary to omit the nucleosome positioning step at 60 °C as this may cause disassembly or precipitation. A major limitation of acetylated nucleosomes is their instability. It may be impossible to preform assays at higher temperatures such as 37 °C without causing nucleosomal precipitation. If experimental procedures allow, perform them at 4 °C to prevent precipitation of the acetylated nucleosome.

This method of producing nucleosomes is particularly useful for producing modified nucleosomes for binding experiments and structure determinations. This method produces nucleosomes with higher purity and a known nucleosomal DNA sequence, which eliminates confounding variables resulting in better controlled experiments and higher resolution images. It is crucial for structure determinations that the nucleosome sample is homogenous with a known DNA sequence, otherwise it will be all but impossible to obtain high resolution images.

There is an abundance of potential applications of this method. Specifically, in the field of epigenetics. It can be incredibly difficult to obtain modified proteins. Obtaining modified proteins is crucial for probing the structure and function of the writers, readers, and erasers in the many epigenetic pathways that are poorly understood. We have previously utilized this technique to probe the accessibility of nucleosomal DNA to Pst1 digestion at the H3 acetylation sites K18, K36, and K56 by assembling each mutant octamer with a modified 601 DNA sequence that contains a Pst1 digestion site. This technique can be further modified to incorporate NCAAs other than AcK. PylRS can be engineered to incorporate a host of other NCAAs. We have also incorporated Nε-(7-azidoheptanoyl)-L-lysine (AzHeK) by amber codon in Escherichia coli for recombinant expression of several AzHeK-containing histone H3 proteins to investigate the histone deacylation activity of SIRT7 at several acetylation sites. This approach revealed that SIRT7 has high activity towards deacylation of H3K36 and is also catalytically active to deacylate H3K37. H3K36 deacylation was further showed to be nucleosome dependent and can be significantly enhanced by adding a short double-stranded DNA to the acyl-nucleosome substrate that mimics the bridging DNA between nucleosomes in native chromatin6.

This method can also be modified to produce wild type nucleosomes with no modifications which can be useful in a variety of scenarios. Our group recently published a structure in collaboration with Dr. Pingwei Li's group showing the tight binding of cyclic GMP-AMP synthase (cGAS) to a negatively charged acidic patch formed by histone H2A and H2B via its second DNA binding site11. cGAS is a dsDNA sensor that catalyzes the synthesis of a cyclic dinucleotide cGAMP, which mediates the induction of type I interferons through the STING-TBK1-IRF3 signaling axis12,13,14,15,16.

The benefit of using fully assembled nucleosomes is it more closely resembles the native state of nucleosomes serving as a better model to probe the activities or binding abilities of any number of epigenetic-related proteins. There are numerous examples of limited or entirely absent enzyme activity towards naked DNA or histone peptide substrates that when probed with nucleosome substrates drastically changes results. As with the example mentioned above, a novel deacylation site was discovered for SIRT7 by using a nucleosome substrate that would have otherwise been unknown. It is crucial to use native substrates when probing these types of systems. This technique can be used to probe the reading, writing, and erasing activity or binding capability of any modification that can be incorporated by the pyrrolysine genetic code expansion technique. The pyrrolysyl-tRNA synthetase is already natively promiscuous and has been engineered for a host of other substrates already opening the door for using this technique in any number of systems making the primary limiting factor the creativity of the researcher.

There are no competing financial interests to declare by any of the authors.

We would like to thank Dr. Wesley Wang for laying the groundwork for this protocol and his valuable mentorship. This work was partially supported by National Institutes of Health (Grants R01GM127575 and R01GM121584) and Welch Foundation (Grant A-1715).