Eye disorders affect millions of people worldwide, but the limited availability of human tissues hinders their study. Mouse models are powerful tools to understand the pathophysiology of ocular diseases because of their similarities with human anatomy and physiology. Alterations in the retinal pigment epithelium (RPE), including changes in morphology and function, are common features shared by many ocular disorders. However, successful isolation and culture of primary mouse RPE cells is very challenging. This paper is an updated audiovisual version of the protocol previously published by Fernandez-Godino et al. in 2016 to efficiently isolate and culture primary mouse RPE cells. This method is highly reproducible and results in robust cultures of highly polarized and pigmented RPE monolayers that can be maintained for several weeks on Transwells. This model opens new avenues for the study of the molecular and cellular mechanisms underlying eye diseases. Moreover, it provides a platform to test therapeutic approaches that can be used to treat important eye diseases with unmet medical needs, including inherited retinal disorders and macular degenerations.

This protocol, which was originally reported by Fernandez-Godino et al. in 20161, describes a method to efficiently isolate and culture mouse retinal pigment epithelium (RPE) cells, which form a functional and polarized RPE monolayer within one week on Transwell plates. The RPE is a monolayer located in the eye between the neural retina and the Bruch's membrane. This single layer consists of highly polarized and pigmented epithelial cells joined by tight junctions, exhibiting a hexagonal shape that resembles a honeycomb2. Despite this apparent histological simplicity, the RPE performs a wide variety of functions critical to the retina and the normal visual cycle2,3,4. The main functions of the RPE monolayer include light absorption, nourishment and renewal of photoreceptors, removal of metabolic end products, control of the ion homeostasis in the subretinal space and maintenance of the blood-retinal barrier2,3. The RPE also has an important role in local modulation of the immune system in the eye5,6,7,8,9,10,11. Degeneration and/or dysfunction of the RPE are common features shared by many ocular disorders such as retinitis pigmentosa, Leber congenital amaurosis, albinism, diabetic retinopathy, and macular degeneration12,13,14,15. Unfortunately, the availability of human tissues is limited. Given their highly conserved genetic homology with humans, mouse models represent a suitable and useful tool for studying ocular disorders16,17,18,19. Furthermore, the use of cultured primary RPE cells provides advantages such as genetic manipulation and drug testing that can accelerate the development of new therapies for these vision-threatening disorders9,11.

Existing methods available for mouse RPE isolation and culture lack reproducibly and do not recapitulate the RPE features in vivo with enough reliability. Cells tend to lose pigmentation, hexagonal shape and transepithelial electrical resistance (TER) within a few days in culture13, 20. Since establishing these primary RPE cell cultures from mice is a challenging process, this optimized protocol has been created based on other protocols to isolate RPE cells from rat and human eyes21,22,23 to dissect the mouse eyes, collect the RPE and culture the mouse RPE cells in vitro.

The guidelines of the ARVO Statement for the Use of Animals in Ophthalmic and Vision Research were followed.

NOTE: This method has been proven successful with mice of different genetic backgrounds, including C57BL/6J, B10.D2-Hco H2d H2-T18c/oSnJ, and albino mice, at various ages. Preferably use 8 to 12-week-old mice to obtain RPE cells. RPE cells from older mice proliferate less in culture and younger mice have fewer and smaller cells, which requires pooling eyes from different animals to have viable cultures.

1. Preparation of reagents and the membrane inserts

2. Dissection and enucleation of the mouse eyes

3. Collection of the RPE

NOTE: Perform the following steps under sterile conditions in a laminar flow hood. To avoid extended incubations on ice, which can result in RPE cell death, do not collect more than two eyes at a time.

NOTE: Perform TER measurements of the RPE cells after a minimum of 4 days in culture to ensure a good integrity and polarization of the RPE monolayer.

This protocol has been used to isolate and culture RPE cells from genetically modified mice1. No differences have been observed between mouse strains or gender. The results have helped to understand some important aspects of the mechanism underlying ocular diseases such as age-related macular degeneration, which is the most common cause of vision loss among the elderly9. RPE cells isolated following this protocol were completely attached to the membrane insert 24 hours after seeding and showed the typical RPE size, morphology and pigmentation after 72 h1. After one week, a highly polarized RPE monolayer was formed by hexagonal pigmented RPE cells with two nuclei joined by tight junctions expressing ZO-1 (Figures 1C, 2). Transmission electron micrographs reveal the presence of apical microvilli and basal infoldings (Figure 1C). Polarization of the RPE monolayer was confirmed by TER values with average higher than 200 Ω x cm2, which remained stable over time (Figure 2).

Functional validation of this method was performed though phagocytosis assays. Mouse RPE cells were cultured on membrane inserts and fed with FITC-labeled bovine POS. POS engulfment and digestion were demonstrated by fluorescent microscopy (Figure 3).

Figure 1. RPE cells at different time-points. (A) 10x brightfield micrographs of RPE cells 24 h post seeding on the membrane inserts, and (B) after one week. (C) Transmission electron micrographs display apical microvilli, basal infoldings, and melanin pigments (black spots) of the RPE cultured on the membrane inserts for two weeks. Scale bars: A, B: 100 µm, C: 2 µm. Please click here to view a larger version of this figure. 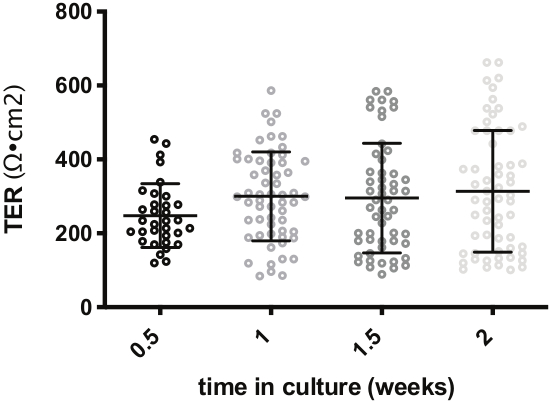 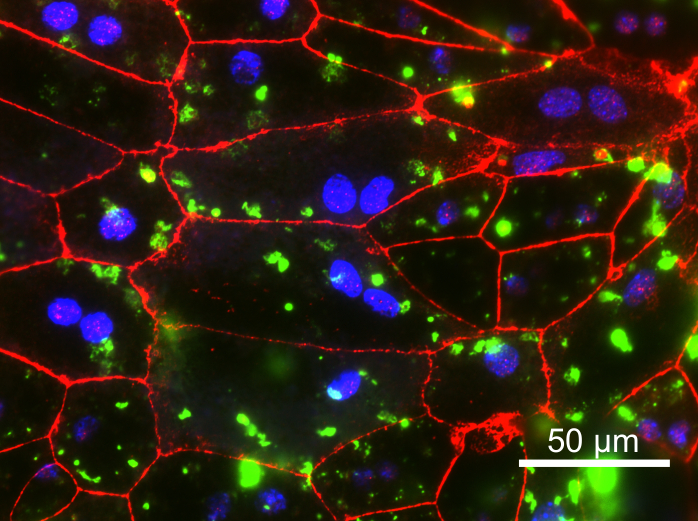 Figure 3. Phagocytosis assays. 40x fluorescent micrographs of primary mouse RPE cultures fed with FITC-labeled bovine POS (green) for two hours and fixed with methanol25. Smaller fragments correspond to digested POS inside the cytoplasm of the cell. Visualization of tight junctions (red) was facilitated by immunostaining with antibodies anti-ZO1 as previously described1,9. DAPI (blue) was used to stain nuclei. Typical mouse RPE cells with two nuclei can be observed in the center of the image. Scale bar: 50 µm. Please click here to view a larger version of this figure.

While several methods for mouse RPE cell isolation and culture had been developed before1,13,20,22,26,27, Fernandez-Godino's method first used membrane inserts allowing the efficient growth of the RPE cells in culture for weeks1,9. Another major change in their protocol1,9 was the use of enzymatic solutions instead of mechanical peeling to dissociate the RPE cells1,13,20,26. The lenses were removed through an incision in the cornea, leaving the iris epithelium intact and preserving the integrity of the retina during the first incubation. The gentle isolation of the RPE cells combined with the use of membrane inserts and specific RPE medium23 results in an improved cell survival, enhancing the formation of a functional confluent monolayer which mimics the physiological conditions of the RPE within days in culture2. Typically, primary mouse RPE cells cultured with this method display hexagonal morphology, polarization, pigmentation, barrier properties, and proliferation. Moreover, the RPE can be cultured in the absence of serum from day three up to several weeks, which is important to study complement-associated RPE pathologies9.

A limitation of this protocol is that primary mouse RPE cells cultured on membrane inserts cannot be expanded. Passaging primary mouse RPE cells with enzymatic solutions or culturing them for a long time results in loss of pigmentation, de-differentiation, and decreased TER, thereby losing the properties that resemble in vivo features. The limited amount of RPE cells obtained from one animal obligates to pool samples from different animals for transcriptomic and proteomic analyses, where relatively large amounts of starting material are required. It is not recommended to scale up the RPE cultures by pooling more eyes into a larger membrane insert, as it can result in a higher percentage of cell death and multilayered RPE cultures.

There are some critical steps to the protocol as well. No more than two eyes should be harvested at the same time until some experience is aquired, since a prolonged dissection time results in a higher percentage of cell death. The optic nerve must be cut away only before the incubation with trypsin. It is critical to handle the eyecup without disturbing the RPE cells, but the optic nerve gets digested by trypsin, which leads to impurities in the RPE cultures. Peeling off the ocular muscles must be performed with caution. If the sclera is perforated and the neural retina pops out, the eye must be discarded because the RPE cells will be damaged and will not survive. Minimal pressure should be applied to remove the lenses. It is preferable to perform a larger corneal incision. It is critical that the eyecup is open and completely submerged in trypsin so that all the RPE cells are exposed to the solution. The RPE cells must be collected through gentle shaking of the eyecup, and never by spraying media or peeling them mechanically.

This work was supported by the Ocular Genomics Institute at Massachusetts Eye and Ear.