The kidneys regulate diverse biological processes such as water, electrolyte, and acid-base homeostasis. Physiological functions of the kidney are executed by multiple cell types arranged in a complex architecture across the corticomedullary axis of the organ. Recent advances in single-cell transcriptomics have accelerated the understanding of cell type-specific gene expression in renal physiology and disease. However, enzyme-based tissue dissociation protocols, which are frequently utilized for single-cell RNA-sequencing (scRNA-seq), require mostly fresh (non-archived) tissue, introduce transcriptional stress responses, and favor the selection of abundant cell types of the kidney cortex resulting in an underrepresentation of cells of the medulla.

Here, we present a protocol that avoids these problems. The protocol is based on nuclei isolation at 4 °C from frozen kidney tissue. Nuclei are isolated from a central piece of the mouse kidney comprised of the cortex, outer medulla, and inner medulla. This reduces the overrepresentation of cortical cells typical for whole-kidney samples for the benefit of medullary cells such that data will represent the entire corticomedullary axis at sufficient abundance. The protocol is simple, rapid, and adaptable and provides a step towards the standardization of single-nuclei transcriptomics in kidney research.

Kidneys display a highly complex tissue architecture. They consist of functionally and anatomically distinct segments along a corticomedullary axis and mediate biological functions, such as regulation of extracellular fluid volume, electrolyte balance, or acid-base homeostasis1.

Advances in single-cell transcriptomics have enabled the in-depth characterization of complex tissues and accelerated the understanding of segment and cell type-specific gene expression in renal physiology, development, and disease2,3,4.

However, the enzyme-based dissociation protocols that are frequently utilized for scRNA-seq display several drawbacks and constraints. Depending on the protocol, they generate transcriptional stress responses and tissue dissociation bias towards easier-to-dissociate cortical cell types5,6. Although protocols using cold-active proteases for embryonic kidneys are able to mitigate stress-related transcriptional alterations, they fail to overcome the dissociation bias towards cortical cells and might not be readily adaptable to different kinds of diseased kidney tissues7. In addition, single-cell approaches are not easily compatible with frozen tissue samples, limiting their application mostly to non-archived, fresh tissue, thus making the tissue collection a restricting factor6.

Single-nuclei RNA sequencing (snRNA-seq) can circumvent these limitations8,9. Here, we present a protocol for nuclei isolation from a central slice of frozen adult mouse kidney tissue (Figure 1)10. Our protocol is simple and provides a standardized approach to obtain RNA sequencing libraries with a balanced representation of diverse kidney cell types for experimental models that do not involve strong regional tissue changes. In the latter case, our protocol can also be performed with whole kidneys.

To determine the performance of our protocol, we used the 10x Genomics Chromium Single Cell 3' Gene Expression Kit v3.1 for library preparation and analyzed the snRNA-seq data with the Seurat package12,13.

Figure 6 shows results from a representative snRNA-seq library. To assess the quality of our nuclei, we plotted the number of genes against the number of transcripts (defined by unique molecular identifiers (UMIs)) colored by the fraction of mitochondrial reads (Figure 6A). Nuclei of good quality generally show higher numbers of reads, correlating UMI and gene numbers, and low mitochondrial read fractions.

For the subsequent analysis, nuclei with less than 500 or more than 4000 counted genes, or more than 5% of mitochondrial RNA were excluded (n = 828). Only genes expressed in a minimum of three nuclei were included. We detected about 20,000 genes in total in the remaining 6,000 nuclei with 1,600 median genes and 2,800 median UMIs per nucleus (Figure 6B).

To assess cell type distributions in our sample, the percentage of each cell type was calculated (Figure 6E) and used to determine the ratio of PT to TAL. The PT is mainly located in the kidney cortex and frequently overrepresented in kidney single-cell datasets as cells of the PT are easy to dissociate and highly abundant in whole kidney samples. The TAL on the other hand stretches across the whole outer medulla14. Thus, the ratio of PT and TAL fractions represents a good measure for the enrichment of medullary cell types in a kidney single-cell dataset. In general, the PT/TAL ratio in single-cell whole kidney datasets ranged from 8 (unpublished data from cold-protease-treated whole kidney tissue) to 45 for enzymatically dissociated tissue10,14,15. In the snRNA-seq dataset presented here we were able to reach a PT/TAL ratio of 2. This result illustrates that removal of excess cortex during tissue dissection combined with snRNA-seq results in a strikingly improved kidney cell type representation. 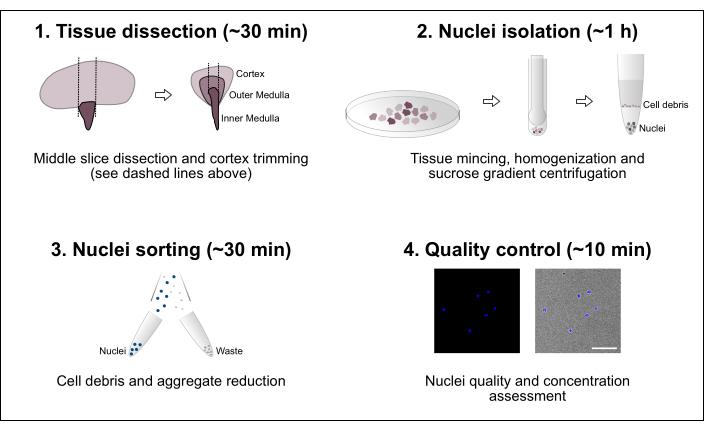 Figure 1: Schematic overview of the workflow. The protocol consists of four major steps that include tissue dissection followed by nuclei isolation, nuclei sorting and a final purity and concentration assessment. Scale bar = 100 µm. Please click here to view a larger version of this figure.

Figure 4: Gating strategy for nuclei sorting. (A) A first gate P1 was set based on forward scatter (FSC) vs side scatter (SSC) to exclude debris and aggregates. (B) A subsequent gate based on DAPI-Area (DAPI-A) vs DAPI-Height (DAPI-H) excluded empty or damaged nuclei and multiplets. Please click here to view a larger version of this figure. 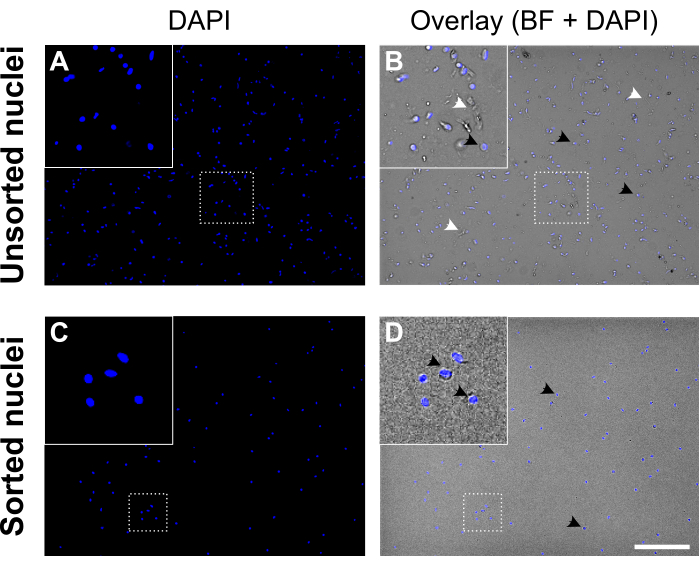 Figure 5: Nuclei suspension before and after nuclei sorting. (A, C) DAPI-stained nuclei (blue). (B, D) Overlay of DAPI and brightfield (BF) channel. Before sorting (upper panel) the nuclei suspension contains cell debris and aggregates (labeled with white arrowheads). After sorting (lower panel) the nuclei suspension appears much cleaner. Examples of DAPI-stained nuclei are labeled with black arrowheads. Good quality nuclei appear round and smooth with an intact membrane and are well-separated, whereas nuclei of poor quality appear wrinkled and show loss of the nuclear membrane. Scale bar = 250 µm. Please click here to view a larger version of this figure. 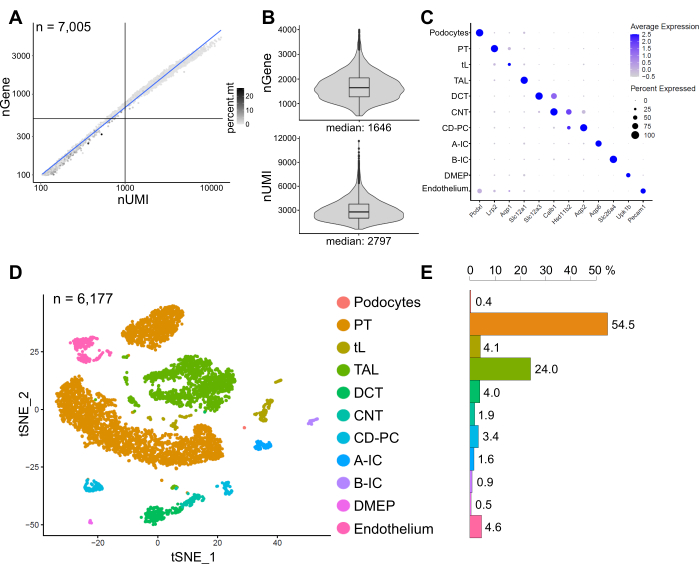 Single-cell transcriptomics advance the understanding of cell type-specific gene expression in renal physiology and disease. Here, we provided a simple and reproducible method to isolate high-quality single nuclei from frozen mouse kidney tissue for snRNA-seq in a standardized way.

In general, appropriate sample handling is crucial to maximizing the recovery of intact, single nuclei. All resuspension steps should be carried out by pipetting carefully to avoid shear stress and physical damage. Buffers for the final nuclei resuspension and nuclei sorting should contain BSA to avoid nuclei loss and aggregation.

Buffer volumes in this protocol are optimized for very small tissue samples (~15 mg). It is critical to ensure complete cell lysis and sufficient washing to generate high-quality suspensions. Larger tissue blocks or whole kidney samples will result in excessive nuclei concentrations that lead to clumping and aggregation, high abundance of ambient RNA, and overall poor suspension quality. If larger samples or other tissues are processed, it is highly recommended to perform trial runs to determine optimal buffer volumes for minimal ambient RNA levels. Nuclei and RNA quality and concentrations need to be examined carefully as overloading results in overall poor performance.

In addition, large amounts of cell debris, causing high levels of ambient RNA not associated with single nuclei influence the sequencing results negatively. Clarification of the nuclei suspension by centrifugation through a sucrose cushion mitigates this problem to some extent, but it can also lead to bias in cell type representation by counter selecting against dense, small nuclei present, for instance, in immune cells16. If this is of concern, the sucrose gradient should be omitted. By contrast, we found that flow cytometry based on DAPI staining was critical to reduce the amount of cell debris in order to produce a high-quality single nuclei suspension.

The isolation of single nuclei has considerable advantages when compared to single-cell approaches8. It is compatible with properly frozen tissue, making the tissue collection more flexible, and circumvents the need of enzyme-based tissue dissociation, which can introduce transcriptional stress responses6,17. Furthermore, it overcomes the dissociation bias that favors the selection of easily dissociable cell types of the renal cortex, which may lead to an underrepresentation of medullary cell types in some enzyme-based approaches5,6,10.

Using a central kidney piece instead of whole kidney tissue further saves resources and corrects for the overrepresentation of abundant cell types as described earlier10. However, depending on the mouse model or phenotype investigated, it may be beneficial to use whole kidney samples instead of a single middle slice. Whole kidney samples may be more representative of true cell proportions, or changes occurring in the whole kidney, whereas a trimmed middle slice proved advantageous for medullary phenotypes or when sample material was limited. This decision, therefore, is highly user-specific and should be considered carefully.

We thank the Scientific Genomics Platform at the Max Delbrück Center for Molecular Medicine in the Helmholtz Association, Berlin for technical support.

JL and KMSO were supported by the German Research Foundation (DFG) Research Training Group GRK 2318 and by Research Unit FOR 2841. KMSO was supported by Collaborative Research Grant 1365. AB was supported by funding from the Gottfried Wilhelm Leibniz Prize of the DFG awarded to NR.