Inflammation is a fundamental aspect of many human diseases. In this video report, we demonstrate non-invasive bioluminescence imaging techniques that distinguish acute and chronic inflammation in mouse models. With tissue damage or pathogen invasion, neutrophils are the first line of defense, playing a major role in mediating the acute inflammatory response. As the inflammatory reaction progresses, circulating monocytes gradually migrate into the site of injury and differentiate into mature macrophages, which mediate chronic inflammation and promote tissue repair by removing tissue debris and producing anti-inflammatory cytokines. Intraperitoneal injection of luminol (5-amino-2,3-dihydro-1,4-phthalazinedione, sodium salt) enables detection of acute inflammation largely mediated by tissue-infiltrating neutrophils. Luminol specifically reacts with the superoxide generated within the phagosomes of neutrophils since bioluminescence results from a myeloperoxidase (MPO) mediated reaction. Lucigenin (bis-N-methylacridinium nitrate) also reacts with superoxide in order to generate bioluminescence. However, lucigenin bioluminescence is independent of MPO and it solely relies on phagocyte NADPH oxidase (Phox) in macrophages during chronic inflammation. Together, luminol and lucigenin allow non-invasive visualization and longitudinal assessment of different phagocyte populations across both acute and chronic inflammatory phases. Given the important role of inflammation in a variety of human diseases, we believe this non-invasive imaging method can help investigate the differential roles of neutrophils and macrophages in a variety of pathological conditions.

Inflammation is a highly regulated biological response involved in a variety of human diseases, including microbial infection 1, wound healing 2, diabetes 3, cancer 4, cardiovascular 5, neurodegenerative 6, and autoimmune diseases 7. Tissue inflammation requires proper coordination of various immune cells in order to achieve pathogen clearance, tissue repair, and disease resolution. Neutrophils and macrophages are key immune mediators of tissue inflammation. In the acute phase of inflammation, neutrophils are the first responders to various harmful stimuli and tissue damage 8. The neutrophils rapidly extravasate from circulation to the site of injury, where the cells inactivate invading microbes by releasing anti-microbial granules and phagocytosis. During phagocytosis, neutrophils engulf invading microbes into phagosomes, within which the cells produce high levels of superoxide (O2·-). Phagosomal superoxide is the primary source of many downstream reactive oxygen species (ROS). For example, superoxide can be dismutated to hydrogen peroxide (H2O2) by spontaneous dismutation or by superoxide dismutase (SOD) 9, 10. In neutrophils, myeloperoxidase (MPO) further converts hydrogen peroxide to anti-microbial hypochlorous acid (HOCl) 11. As the inflammatory responses continue, circulating monocytes gradually migrate into the site of injury and differentiate into mature macrophages 2, whose phagocytic function help remove inactivated pathogens and cell debris. In addition, as a key regulator in the later phase of inflammation, macrophage promotes tissue repair by producing anti-inflammatory cytokines 12 and by generating extracellular ROS at a lower level 9. The ROS generated at this later stage regulate tissue remodeling, new vessel formation, and reepithelialization 13.

Phagocyte NADPH oxidase (Phox) is the primary source of superoxide production in both neutrophils and macrophages 9. Phox is a multi-subunit complex whose assembly is tightly regulated 9. The holoenzyme contains several cytosolic regulatory subunits (p67phox, p47phox, p40phox, and RAC) and a membrane-bound heterodimer cytochrome b558 (consist of subunit CYBA and CYBB). Cytochrome b558 is the reaction core within which the CYBB subunit (also known as p91phox and NOX2) carries out the primary redox chain reaction 9. Interestingly, its assembly sites are different between neutrophils and macrophages. In resting neutrophils, cytochrome b558 is mostly present in the membrane of intracellular storage granules 14. During phagocytosis, neutrophils assemble the holoenzymes at phagosomes 9, where high levels of MPO activity are also present. The neutrophil Phox rapidly consumes oxygen and exerts its microbicidal power by ROS production, a phenomenon termed the respiratory burst 11. In contrast, macrophages have a lower level of MPO expression and cytochrome b558 is mostly found in the plasma membrane 15, 16. Thus neutrophils produce high levels of superoxide for anti-microbial activity, while macrophages generate less superoxide for regulatory functions 15.

Since inflammation is an intricate in vivo process, non-invasive imaging methods specific for different phases of inflammation would allow quantitative and longitudinal assessment of disease models. Using mechanistic studies, we have previously demonstrated the use of two chemiluminescent agents, luminol (5-amino-2,3-dihydro-1,4-phthalazinedione) and lucigenin (bis-N-methylacridinium nitrate), for non-invasive imaging of acute and late (chronic) stages of inflammation, respectively 17. Luminol enables visualization of neutrophil MPO activity in the acute phase of inflammation 18-20, whereas lucigenin bioluminescence can be used to assess macrophage activity in association with the late phase or chronic inflammation 17. In this manuscript, we used two experimental inflammation models (s.c. PMA and s.c. LPS) to demonstrate these imaging techniques.

Independently, we s.c. injected 50 μg of lipopolysaccharide (LPS) in the footpads of wild-type C57BL/6J mice, and performed longitudinal bioluminescence imaging for up to 10 days (Figure 2A). LPS is a membrane component of Gram-negative bacteria. S.C. inoculation of LPS is capable of triggering strong inflammatory responses by TLR4 receptor activation and subsequent inflammatory chemokine/cytokine production 24. Unlike PMA which directly activates Phox for superoxide production, LPS requires a longer period of time to fully activate tissue infiltrating phagocytes 18. As neutrophils are the early responders to microbe infection, we observed elevated luminol bioluminescence during the first 4 days of acute inflammation, which declined after day 5 (Figure 2B). In contrast, lucigenin bioluminescence gradually increased in the late and chronic phase of inflammation (Figure 2B, days 5-10).

Together, these results demonstrate the ability to use differential substrate specificity to distinguish acute and chronic inflammatory stages. Importantly, imaging is mediated by the endogenous enzymatic activities of the immune cells, and there is no need for ectopic expression of reporters. 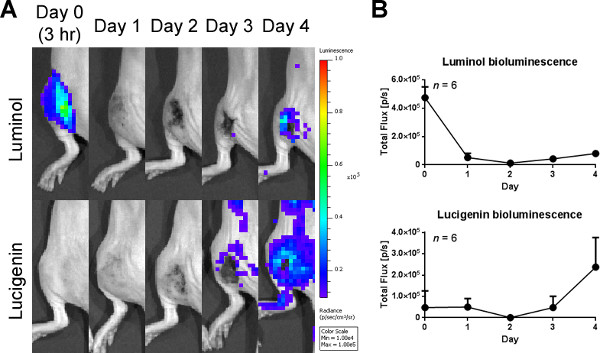 In this report, we demonstrate a bioluminescence method for non-invasive imaging of inflammation in living animals. Taking advantage of two luminescent substrates, luminol and lucigenin, the method can distinguish different phases of inflammation. Luminol bioluminescence is associated with neutrophils in the acute phase of inflammation, whereas lucigenin bioluminescence is mediated by macrophages in the chronic phase. Relatively small (M.W. = 177.16 g/mol) and electrically uncharged, luminol can readily penetrate both plasma and phagosomal membrane 25-29. In addition, luminol luminescence is specific to the intracellular MPO activity in neutrophils 9. On the other hand, lucigenin is mostly membrane impermeable due to its larger size (M.W. = 510.5 g/mol) and two positive charges 25, 27-30.

Neutrophils and macrophages assemble the Phox holoenzyme at different subcellular locations. Although both reagents depend upon Phox to provide superoxide anion (O2·-), the disparity in cell permeability and MPO-dependency enables the substrates to differentiate inflammatory phagocytes in disease models. Neutrophils express most of the Phox in the membrane of intracellular vesicles (phagosomes) 14, where high levels of MPO are also present. As a result, luminol bioluminescence is specifically associated with activated neutrophils during acute inflammation. In contrast, macrophages assemble Phox in the plasma membrane as they infiltrate and mature during chronic inflammation 15. Non-permeable lucigenin can directly interact with the extracellular superoxide generated by macrophages to produce chronic inflammatory bioluminescence.

Inflammation is a complicated in vivo process that requires proper coordination of many cell types and various extracellular signaling molecules. In this video report, we demonstrate the synergistic use of both luminol and lucigenin, to monitor acute and late (chronic) phase inflammation in animal models. Since these substrates are commercially available and relatively inexpensive, we believe this relatively simple and robust imaging method can be readily translated to in vivo applications in many disease areas. Of note, compared with PET, MRI and near-infrared (NIR) fluorescent imaging techniques, the chemiluminescent method is not ideal for deep tissue imaging due to the substrates' blue emission spectra. To improve tissue penetration, it has been recently demonstrated that the blue chemiluminescence emission can be transferred to co-administrated nanoparticles for NIR emission 31. Further modification of their chemical structures could potentially enhance their quantum efficiency for stronger light output and refine their emission spectra for deeper tissue penetration.

The authors declare no conflict of interest in this study.

This work was supported by the Nancy Lurie Marks Foundation. We thank Dr. Nancy E. Kohl for critical reading of the manuscript. We thank Kin K. Wong for his assistance in preparing this video report.