Heligmosomoides polygyrus is a murine nematode with powerful immunomodulatory capabilities that closely resemble those of highly-prevalent human helminth infection. Here we describe a protocol for the long-term maintenance of the H. polygyrus lifecycle.

Heligmosomoides polygyrus (formerly known as Nematospiroides dubius, and also referred to by some as H. bakeri) is a gastrointestinal helminth that employs multiple immunomodulatory mechanisms to establish chronic infection in mice and closely resembles prevalent human helminth infections. H. polygyrus has been studied extensively in the field of helminth-derived immune regulation and has been found to potently suppress experimental models of allergy and autoimmunity (both with active infection and isolated secreted products). The protocol described in this paper outlines management of the H. polygyrus life cycle for consistent production of L3 larvae, recovery of adult parasites, and collection of their excretory-secretory products (HES).

Heligmosomoides polygyrus is a natural murine gastrointestinal helminth that is closely related to highly-prevalent human nematode parasites 1. In contrast to other nematode models such as Nippostrongylus brasiliensis, H. polygyrus consistently establishes chronic infection in mice as a direct result of multiple powerful immunomodulatory mechanisms it employs to suppress the host immune response 2.

H. polygyrus has a direct life cycle: infective L3 larvae are ingested by feco-oral transmission (or administered by oral gavage in the laboratory setting), whereupon they migrate to the subserosal layer of the duodenum and encyst before returning to the intestinal lumen as adult worms approximately eight days after initial infection. Mating and egg production occurs by day 10 and it is possible to harvest adult worms for culture and collection of excretory-secretory products from day 14 onwards 3. H. polygyrus also interacts with the commensal microflora, with increased Lactobacilli present in infected susceptible mice 4-6, and increased levels of H. polygyrus infection following exposure of mice to Lactobacilli 6.

Active infection with H. polygyrus has been shown to protect against immunopathology in many animal models of autoimmunity 7-10, colitis 11,12 and allergy 13-16. There has consequently been great interest in the potential of Excretory-Secretory molecules from this parasite (“HES”) to down-modulate pathology in vivo 17,18. Indeed, protective effects are seen following treatment of mice with HES products 19 through pathways which are now being identified 18,20. Here we describe a protocol for the reliable production of Heligmosomoides polygyrus and recovery of its secreted products that can be further utilized for a range of functional biochemical and immunological investigations.

NOTE: All procedures in this protocol are performed in accordance with guidelines set out by the United Kingdom Home Office and the University of Edinburgh Veterinary Services.

1. Infection of Mice by Gavage

2. Propagation and Maintenance of H. polygyrus

Susceptibility to infection with H. polygyrus is controlled to a large degree by the genetic background of the mouse strain (Table 1); C57BL/6 and CBA mice are highly susceptible 21,22. For maintenance of the parasite life cycle, the F1 hybrid between these two strains has been chosen for its ability to withstand much higher worm burdens without morbidity (excessive intestinal epithelial damage) compared to either parental strain. Oral gavage of 400 L3 larvae is used to maintain the life cycle in F1 mice (resulting in adult worm burdens shown in Figure 2), whilst a dose of 200 L3 larvae is generally used for experiments in homozygous inbred strains (e.g., C57BL/6 or BALBc). However, this dosage may need to be reduced depending on environmental co-factors that may differ between animal facilities, such as variations in gut flora.

Batches of HES have proven reproducible efficacy in functional assays and in protein composition; moreover, when supernatants from each successive week of culture were analysed, up to a total of 4 weeks, the protein profiles were found to be very similar (Figure 3). When HES concentration is measured by Bradford assay (see 5.5), the total protein is usually approximately 1 mg/ml (Figure 4).

An alternative method of concentrating HES is with a centrifugal concentrator (eg Vivaspin 3-kDa cut-off membrane), in which samples are spun at up to 4,000 g in a swing-out rotor centrifuge, removing buffer salts and low molecular weight components. Centrifugal concentration is best suited to small processing volumes (1-10 ml) and are limited to a maximum concentration factor of approximately 30x.

When collecting HES, avoidance of contamination is critical. To avoid contamination with host molecules, we discard HES-containing culture media from the first 24 hr after adult worm harvest from the mouse intestine. We also quantify the level of LPS contamination in each batch of HES with a Chromogenic LAL assay (see 5.7). 1 U of LPS equates to ~100 pg LPS and levels below this are considered negligible 23. In our hands, most batches of HES are significantly below this limit, the mean concentration of LPS in HES being 0.23 U/µg (Figure 5). The effects of LPS in in vivo models of pathology (for instance the suppression of asthmatic responses) requires at least 10 ng of LPS 23. Hence in vivo administration of 5 µg HES from a batch with 100 pg LPS/µg HES will include 500 pg LPS, well below the effective concentration where LPS becomes a problem. 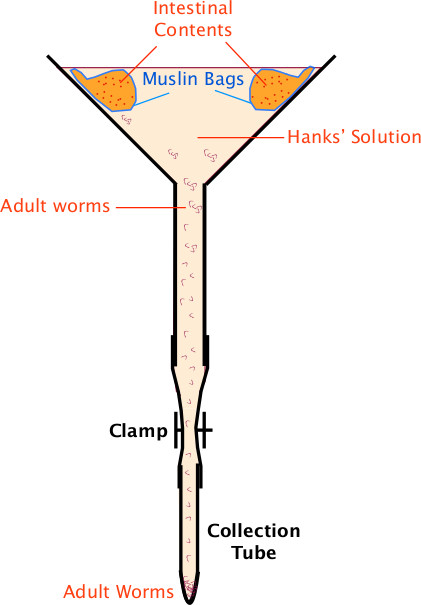 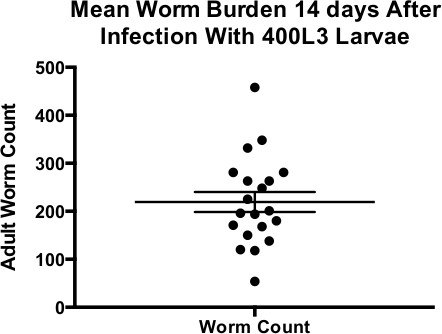 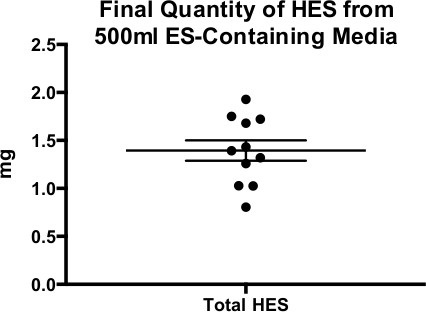 Figure 5: LPS Contamination of HES Levels of LPS contamination in 41 batches of HES measured by the Limulus ameobocyte assay. Median LPS concentration = 86 U per mg of HES. 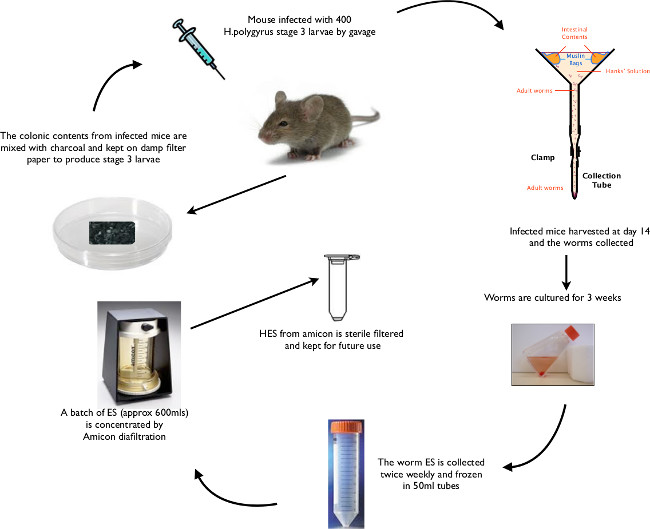 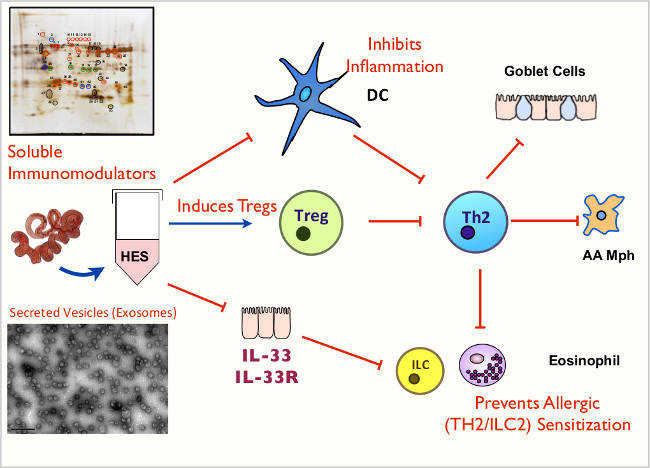 Figure 7: Animated Schematic of HES and its Functions Key immunomodulatory effects of soluble mediators and exosomes contained within HES.

The life cycle of H. polygyrus proceeds in a reliably consistent fashion. Following natural ingestion or oral gavage of L3 larvae on day 0, cysts begin to form under the duodenal serosa by day 5, progressing to larval moults and then emerging as adult worms into the gut lumen from day 10, eggs can be seen in feces from day 14 and granulomas are visible on the duodenal serosal surface from day 21. The protocol described above (and summarized in Figure 6) allows for high-throughput production of H. polygyrus excretory-secretory products (HES), in addition to reliable recovery of viable L3 larvae for future experimental and life cycle infections.

H. polygyrus infection has been shown to be protective in models of asthma dependent on OVA or Der p 1 (House dust mite allergen)14. Furthermore, suppression of airway inflammation could be transferred with CD4+CD25+ regulatory T cells 14 or CD19+CD23hi regulatory B cells 24 from non-sensitised, H. polygyrus-infected mice. In models of autoimmunity, H. polygyrus infection has been shown to be suppressive in the experimental autoimmune encephalomyelitis (EAE) model of multiple sclerosis 9, and suppression can be transferred with either CD4+ T cells or CD19+ B cells from infected mice 24.

Heligmosomoides polygyrus excretory-secretory products (HES) modulate the host immune response and suppress Th2-mediated inflammation by a number of mechanisms (outlined in Figure 7), including: a) Inhibition of dendritic cell responsiveness to stimulation 25, b) induction of CD4+Foxp3+ regulatory T cells 18 . and c) blockade of IL-33 production 20. HES has been shown to be protective when administered at sensitization or challenge in the OVA-alum model of asthma 19 and also when administered intranasally with Alternaria extract allergen 20, through suppression of early IL-33 release. Avoidance of LPS contamination of HES is often crucial for the success of future immunological experiments. In the protocol outlined here, the critical steps in achieving this are to ensure that debris contained within the muslin bags of the Baermann Apparatus does not enter the final HES preparation (see 2.10) and to set aside ES solution from the first 24 hr of culture (see 5.1).

Over recent years, HES has been thoroughly characterized at the proteomic level with over 370 distinct proteins identified 26,27. In addition, ES from the 4th stage larvae has been subjected to proteomic analysis 28. Ongoing work includes characterizing the major glycan components of HES, known to be strongly immunogenic 3, and secreted micro-RNAs that are encapsulated in 50-100 nm vesicles or exosomes (Buck et al., submitted for publication). With the establishment of reproducible protocols for the collection of ES from this highly immunomodulatory parasite, and with extensive proteomic data identifying the molecular components of HES, the stage is now set for the identification and therapeutic testing of individual molecules from H. polygyrus that can mediate key effects on the host immune system.

The authors are funded by the Wellcome Trust through the Edinburgh Clinical Academic Track (C.J.C.J.) and Programme Grant (Y.H., and R.M.M.) and Fellowship (J.R.G) funding, the BBSRC (G.C.), the American Asthma Foundation (E.R., H.J.McS. and R.M.M.), Asthma UK (H.J.McS.) and the Rainin Foundation (D.J.S. and R.M.M.).