Chromosomes must be reliably and uniformly segregated into daughter cells during mitotic cell division. Fidelity of chromosomal segregation is controlled by multiple mechanisms that include the Spindle Assembly Checkpoint (SAC). The SAC is part of a complex feedback system that is responsible for prevention of a cell progress through mitosis unless all chromosomal kinetochores have attached to spindle microtubules. Chromosomal lagging and abnormal chromosome segregation is an indicator of dysfunctional cell cycle control checkpoints and can be used to measure the genomic stability of dividing cells. Deregulation of the SAC can result in the transformation of a normal cell into a malignant cell through the accumulation of errors during chromosomal segregation. Implementation of the SAC and the formation of the kinetochore complex are tightly regulated by interactions between kinases and phosphatase such as Protein Phosphatase 2A (PP2A). This protocol describes live cell imaging of lagging chromosomes in mouse embryonic fibroblasts isolated from mice that had a knockout of the PP2A-B56γ regulatory subunit. This method overcomes the shortcomings of other cell cycle control imaging techniques such as flow cytometry or immunocytochemistry that only provide a snapshot of a cell cytokinesis status, instead of a dynamic spatiotemporal visualization of chromosomes during mitosis.

In the following protocol, we describe a convenient method to visualize the chromosomal segregation and mitotic progression during cell cycle in mouse embryonic fibroblasts using Histone 2B-GFP, BacMam 2.0 labeling and live cell imaging.

Cell cycle control checkpoints monitor chromosome segregation and play an important role in the maintenance of the genetic integrity of the cell 1,2,3. Accumulation of mis-segregated chromosomes can lead to aneuploidy, which is a hallmark of most solid tumors 4. Hence, detection of lagging chromosomes can be used as a method to study chromosomal instability.

Fluorescently labeled proteins can be used to visualize live chromosome segregation and chromosomal lagging but the generation of mCherry-tagged or H2B-GFP tagged protein requires substantial knowledge of gene delivery and molecular biology 5. Here we describe the use of CellLight Histone2B-GFP BacMam 2.0 reagent, hereafter called CL-HB regent, for the sake of simplicity. This reagent can be used immediately and thus eliminates concerns about vector quality and integrity. In addition, this reagent does not require the use of potentially harmful treatments or lipids and dye-loading chemicals. Unlike conventional fluorescent labels, the CL-HB regent stains independently of function (i.e., membrane potential). The CL-HB regent can be simply added to the cells and incubated overnight for protein expression. The CL-HB regent does not replicate in mammalian cells and can be used in biosafety level (BSL) 1 laboratory settings. Also, this transient transfection can be detected after overnight incubation for up to 5 days, enough time to carry out most dynamic cellular analyses.

Alternatively, chromosomal abnormalities could be studied by various techniques such as flow cytometry, immunohistochemistry or fluorescence in situ hybridization (FISH) 6. Flow cytometry can be used to study aneuploidy, which can be measured based on DNA content and the phase of cells in the cell cycle. Although flow cytometry can be used to measure aneuploidy, it does not provide information on chromosomal mis-segregation. FISH and immunohistochemistry techniques use fluorescent probes to bind to DNA or chromosomes. While these techniques provide a snapshot of the status of a population of cells, they do not allow live cell imaging thereby missing any information obtained through spatiotemporal visualization of cytokinesis in specific cells followed over a period of time.

All the experiments conducted in these studies were performed in accordance with protocols approved by the Institutional Animal Care and Use Committee at the Food and Drug Administration (FDA) research facility.

Note: Perform three-dimensional image processing and analysis using any available software such as Axiovision version 4.8.2 or Imaris version 8.2. For this study the ImageJ software was used.

MEFs from wild type and PP2A-B56γ- mice were seeded in a 2-well chamber cover glass and allowed to attach. On day 2, MEFs were synchronized using 0.1% FBS for 24 h. On day 3, MEFs in media with 200 ng/mL nocodazole and 30 PPC CL-HB regentwere incubated for 18 h at 37°C and 5% CO2. On day 4, the cells were imaged using a spinning disk confocal microscope system (Figure 1). Live cell imaging was used to visualize the fate of individual cells as they progressed from NEBD through mitosis (Figure 2). Nocodazole is known to arrest the wild type cells at G2M phase by interfering with microtubule formation. It was observed that post nocodazole treatment wild type cells were arrested at metaphase upper panel (Figure 2). We observed that lack of PP2A-B56γ weakened the cell cycle control, which allowed PP2A-B56γ- MEFs to overcome cell cycle arrest induced by nocodazole 9. In addition, abnormal chromosomal segregation was detected in 62% (13 out of 21) of mitotic PP2A-B56γ- MEFs treated with nocodazole (shown by yellow arrows in lower panel in Figure 2). Five of the PP2A-B56γ- MEFs arrested at NEBD and 3 went through mitosis without observable defects. In contrast, all 21 wild type cells that were imaged did not proceed through mitosis and were found to be arrested by metaphase (upper panel Figure 2). 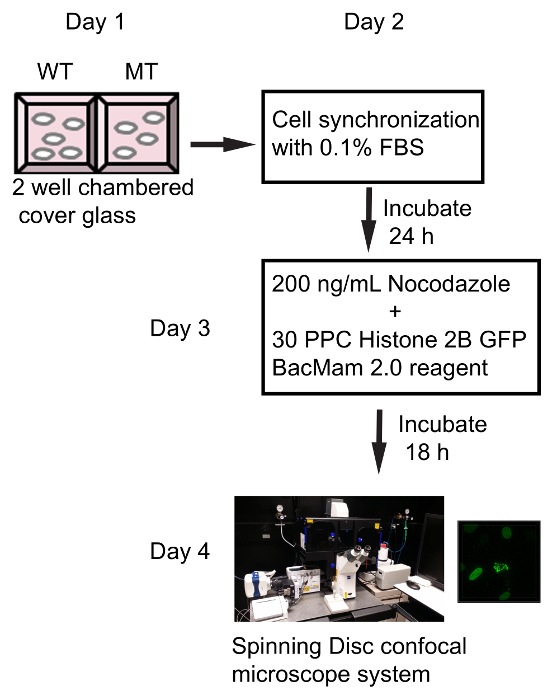 This protocol utilizes Histone2B-GFP label generated by BacMam 2.0 technology to label chromosomes for live cell imaging. One of the critical steps in labeling is calculating right amount of particles per cells (PPC) to achieve enough labeling. It was found through titration that 10-50 PPC works best. This reagent could be toxic to the cells; hence it is necessary to titrate PPC used to achieve balance between labelling and toxicity to the labelled cells. Also, this is a transient transfection and can be detected only up to 5 days, hence, it may not be appropriate for studies that would warrant longer observation periods.

Traditional tagging of the protein or DNA can require complicated protocols, but here we use a reagent which requires only an overnight incubation with desired cells. In addition, live cell imaging was performed using spinning disc confocal microscopy which unlike confocal laser scanning microscopy is faster and reduces phototoxicity and bleaching effects in the living cells 11. This protocol allows easy, convenient method to label mitotic cells and visualize chromosomal segregation as compared to the other techniques such as FISH, immunohistochemistry and flow cytometry. This protocol also allows the capture of lagging chromosomes images throughout mitosis providing additional information to that obtained using traditional immunocytochemistry, FISH or flow cytometry, thereby making it possible to capture the phenotypes such as lagging chromosome in both space and time. This protocol allows convenient, fast and easy labeling of chromosomes in wide variety of cell lines, primary cells, stem cells, neurons and immortalized T-cells 12,13,14.

Various types of cell therapy products are being developed with the hopes to treat varied disease conditions 15. One of the challenges faced in the development of these cell therapies involves safety concerns due to possibility of genetic instability and tumorigenesis. This protocol describes a convenient and easy method to label chromosomes in variety of cell types. In the future it could be employed to develop an assay to study and measure genetic instability and quality of the cell therapy products.

We would like to thank Dr. Guo-Chiuan Hung and Dr. Bharatkumar Joshi for valuable comments that improved the manuscript.