Details of signal generation and optimization, measurement, data acquisition, and data handling for a femtosecond time-resolved near-IR stimulated Raman spectrometer are described. A near infrared stimulated Raman study on the excited-state dynamics of β-carotene in toluene is shown as a representative application.

Raman spectroscopy is a powerful and versatile tool for investigating the structures of molecules in a wide variety of samples from simple gases, liquids, and solids to functional materials and biological systems. Raman scattering is significantly enhanced when the photon energy of the excitation light coincides with the electronic transition energy of a molecule. The resonance Raman effect enables us to selectively observe the Raman spectrum of a species in a sample composed of many kinds of molecules. Near-IR electronic transitions are drawing a lot of attention as a probe for investigating the excited-state dynamics of molecules with large π-conjugated structures. The energy and lifetime of the lowest excited singlet state have been determined for several carotenoids, which have a long one-dimensional polyene chain1,2,3. The dynamics of neutral and charged excitations have been extensively investigated for various photoconductive polymers in films4,5,6,7, nanoparticles8, and solutions9,10,11. Detailed information on the structures of the transients will be obtainable if time-resolved near-IR Raman spectroscopy is applied to these systems. Only a few studies, however, have been reported on time-resolved near-IR Raman spectroscopy12,13,14,15,16, because the sensitivity of near-IR Raman spectrometers is extremely low. The low sensitivity principally originates from the low probability of near-IR Raman scattering. The probability of spontaneous Raman scattering is proportional to ωiωs3, where ωi and ωs are the frequencies of the excitation light and the Raman scattering light, respectively. In addition, commercially available near-IR detectors have much lower sensitivity than CCD detectors functioning in the UV and visible regions.

Femtosecond time-resolved near-IR stimulated Raman spectroscopy was applied to β-carotene in toluene solution. The concentration of the sample was 1 x 10-4 mol dm-3. The sample was photoexcited by the actinic pump pulse at 480 nm with a pulse energy of 1 μJ. Time-resolved stimulated Raman spectra of β-carotene in toluene are shown in Figure 2A. The raw spectra contained strong Raman bands of the solvent toluene and a weak Raman band of β-carotene in the ground state as well as Raman bands of photoexcited β-carotene. They were subtracted using the stimulated Raman spectrum of the same solution at 1 ps before photoexcitation. The spectra after the subtraction (Figure 2B) showed distorted baselines that are caused by absorption of photoexcited β-carotene and/or other nonlinear optical processes. The baselines became flat after they were corrected with polynomial functions (Figure 2C). 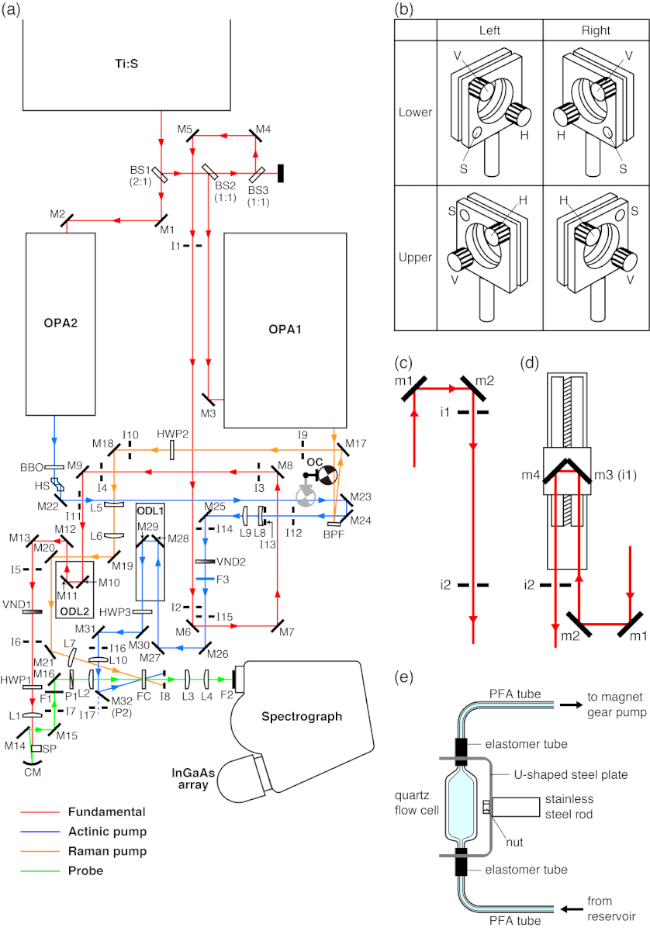 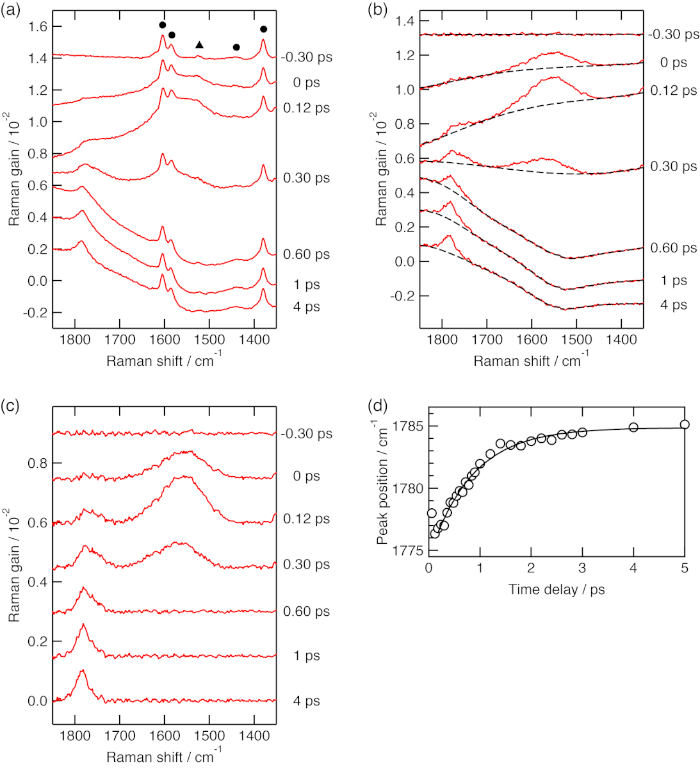 Crucial factors in femtosecond time-resolved near-IR multiplex stimulated Raman measurement
To obtain time-resolved near-IR stimulated Raman spectra with a high signal-to-noise ratio, the probe spectrum should ideally have uniform intensity in the whole wavelength range. White-light continuum generation (section 2.5) is, therefore, one of the most crucial parts of time-resolved near-IR stimulated Raman experiments. In general, the probe spectrum becomes broad and flat as the intensity of the incident beam increases. A high beam intensity, however, easily produces undesirable nonlinear optical effects other than the white light continuum generation. In a worst-case scenario, the nonlinear effects provide the probe spectrum with a large intensity fluctuation and an oscillatory pattern that significantly lowers the signal-to-noise ratio of stimulated Raman spectra. Figure 2C shows how the oscillatory pattern affects the spectra. It shows oscillatory patterns from -0.30 to 4 ps, but the patterns appear only weakly, with a peak-to-peak amplitude of 1 x 10-4, as white light generation is carefully optimized. Another undesirable effect on the probe spectrum can be provided by water vapor in the air2,11. The effect of water vapor might be avoided if part of the spectrometer, including the white light generation optics, sample, and spectrograph, is set in a chamber filled with dry nitrogen.

Accuracy of Raman shift calibration
As described in section 8, we calibrate the Raman shift axis by the least-squares fitting analysis of the peak positions of the solvent bands in Raman shift against those in the pixel number of the detector with a polynomial function. We think this protocol works well as long as the Raman pump wavelength cannot be determined with high accuracy. It is the case for our spectrometer because each pixel of our detector covers as large as 3.5 cm-1 at around the wavenumber of the Raman pump pulse. However, the solvents must be chosen so that all the transient stimulated Raman bands of the sample appear between the highest and lowest wavenumbers of the solvent bands (section 8). The Raman shift calibration curve loses its accuracy beyond the range of the solvent bands. In Figure 2, a Raman band of S1 β-carotene in toluene, at 1,785 cm-1, appears beyond the highest wavenumber of the solvent bands, 1,710 cm-1. We have confirmed that the peak position agrees well with that in benzene determined by picosecond time-resolved spontaneous Raman spectroscopy35,36.