Skip to content
Trial ends in Request Full Access Tell Your Colleague About Jove
Chapter 19: Radioactivity and Nuclear Chemistry Back To Chapter

A nucleus contains most of an atom's mass and is tiny compared with the entire atom. The average nuclear density is nine trillion times greater than the density of osmium: the densest element!

The earth would be 30,000 times smaller if it had the density of the nucleus. Why does the nucleus have such a high density?

Plotting nuclides by the numbers of protons and neutrons illustrates that the stable nuclei occupy a central region, indicated in blue, which is called the belt or valley of stability.

Lighter nuclides with neutron-to-proton ratios of one, like carbon-12, enjoy great stability. As the atomic number increases beyond 20, more neutrons are required to counterbalance the proton–proton repulsions.

Neutrons are attracted to each other by nuclear forces, whereas there are no repulsive interactions amongst them. Thus, an increase in the number of neutrons fortifies the nuclear force significantly. All stable heavier nuclides have neutron-to-proton ratios of greater than one.

Interestingly, just like electron pairs residing in the orbitals, proton–proton and neutron–neutron pairing is observed in the nucleus. When the numbers of protons and neutrons are both even, nuclei are remarkably stable, as pairing is possible for all nucleons. Only five nuclides with odd numbers of neutrons and protons are stable.

All nuclei with atomic numbers higher than 82 are radioactive. However, bismuth-209, atomic number 83, has an exceptionally long half-life among radionuclides.

For a radionuclide far from the stability belt, its decay chain is the series of decay processes by which it ultimately reaches a stable nuclide.

Protons and neutrons, collectively called nucleons, are packed together tightly in a nucleus. With a radius of about 10−15 meters, a nucleus is quite small compared to the radius of the entire atom, which is about 10−10 meters. Nuclei are extremely dense compared to bulk matter, averaging 1.8 × 1014 grams per cubic centimeter. If the earth’s density were equal to the average nuclear density, the earth’s radius would be only about 200 meters.

A plot of the number of neutrons versus the number of protons for stable nuclei reveals that the stable isotopes fall into a narrow band. This region is known as the band of stability (also called the belt, zone, or valley of stability). The straight line in Figure 1 represents nuclei that have a 1:1 ratio of protons to neutrons (n:p ratio). Note that the lighter stable nuclei, in general, have equal numbers of protons and neutrons. For example, nitrogen-14 has seven protons and seven neutrons. Heavier stable nuclei, however, have increasingly more neutrons than protons. For example: the stable nuclide iron-56 has 30 neutrons and 26 protons, an n:p ratio of 1.15, whereas the stable nuclide lead-207 has 125 neutrons and 82 protons, an n:p ratio equal to 1.52. This is because larger nuclei have more proton–proton repulsions and require larger numbers of neutrons to provide compensating strong forces to overcome these electrostatic repulsions and hold the nucleus together. 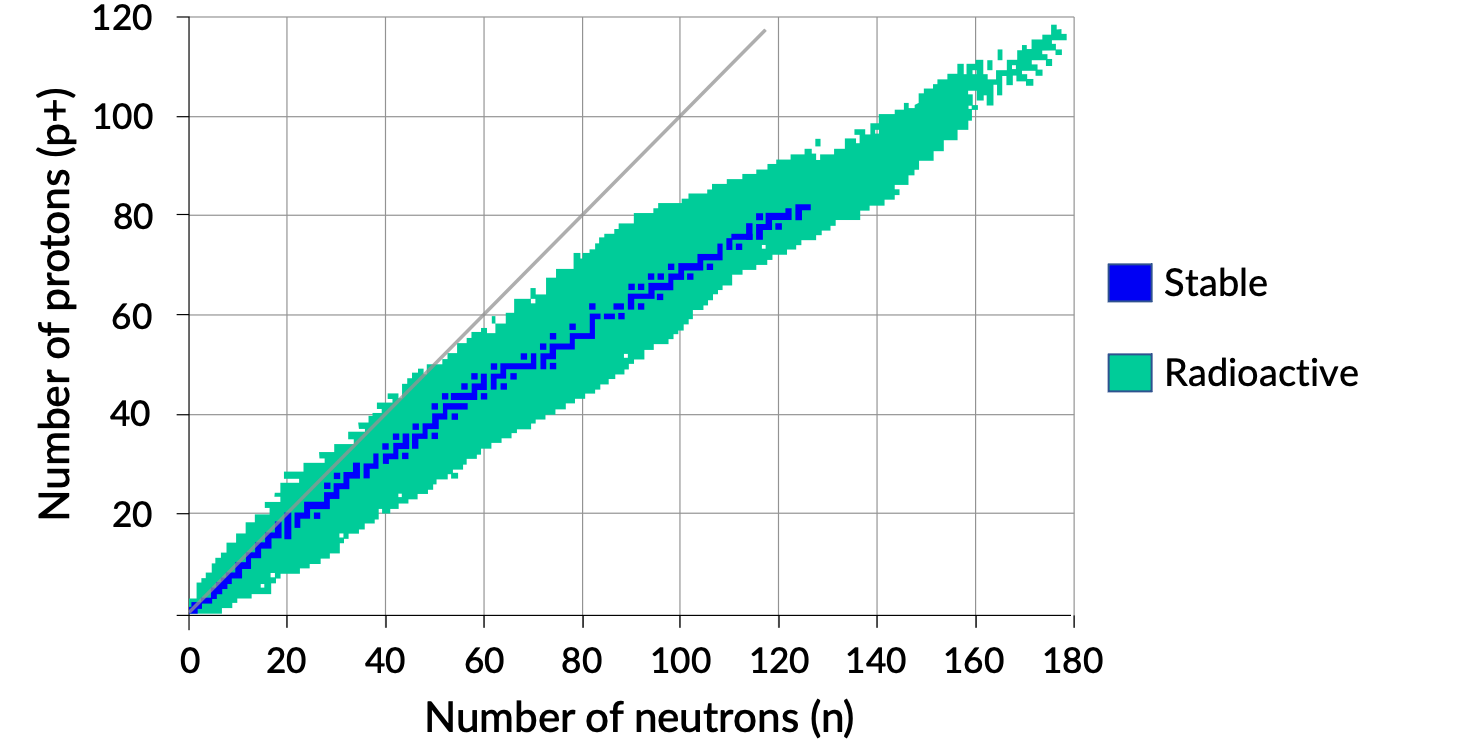 Several observations may be made regarding the relationship between the stability of a nucleus and its structure.

Nuclei with even numbers of protons, neutrons, or both are more likely to be stable. Nuclei with certain numbers of nucleons, known as magic numbers, are stable against nuclear decay. These numbers of protons or neutrons (2, 8, 20, 28, 50, 82, and 126) make complete shells in the nucleus. These are similar in concept to the stable electron shells observed for the noble gases. Nuclei that have magic numbers of both protons and neutrons are called “doubly magic” and are particularly stable.

Nuclei with atomic numbers higher than 82 are radioactive. Bismuth-209, atomic number 83, was thought to be stable for a very long time and can be handled as though it was non-radioactive. Although it is radioactive, it has an exceptionally long half-life among radionuclides.

The naturally occurring radioactive isotopes of the heaviest elements fall into chains of successive disintegrations, or decays, and all the species in one chain constitute a radioactive family, or radioactive decay series. Three of these series include most of the naturally radioactive elements of the periodic table. They are the uranium series, the actinide series, and the thorium series. The neptunium series is a fourth series, which is no longer significant on the earth because of the short half-lives of the species involved.

This text is adapted from Openstax, Chemistry 2e, Section 21.1: Nuclear Structure and Stability.