This video shows how morpholino or mRNA can be injected into zebrafish embryos at the one-cell stage to decrease or increase the level of specific gene products during subsequent development.

One of the advantages of studying zebrafish is the ease and speed of manipulating protein levels in the embryo. Morpholinos, which are synthetic oligonucleotides with antisense complementarity to target RNAs, can be added to the embryo to reduce the expression of a particular gene product. Conversely, processed mRNA can be added to the embryo to increase levels of a gene product. The vehicle for adding either mRNA or morpholino to an embryo is microinjection. Microinjection is efficient and rapid, allowing for the injection of hundreds of embryos per hour. This video shows all the steps involved in microinjection. Briefly, eggs are collected immediately after being laid and lined up against a microscope slide in a Petri dish. Next, a fine-tipped needle loaded with injection material is connected to a microinjector and an air source, and the microinjector controls are adjusted to produce a desirable injection volume. Finally, the needle is plunged into the embryo's yolk and the morpholino or mRNA is expelled.

Depending on what is being injected, embryos may survive at a lower rate than their uninjected siblings. Fortunately, it is easy to inject huge numbers of them, so this is rarely a problem. It is normal for morphants to exhibit slightly delayed development.

To illustrate the results of microinjection, we used this protocol to manipulate levels of the protein Heart of Glass (Heg). Heg is a transmembrane protein required for normal heart development. In its absence, embryos develop hearts with giant inflow tracts and chambers1. We injected two previously undescribed morpholinos against heg, heg_e3i3_egfr1 and heg_e4i4_egfr2, at a concentration of 500 μM. At 2 days post fertilization, the uninjected sibling controls appear normal, as expected (figure 2A and B). Embryos injected with heg_e3i3_egfr1 have brain edema (figure 2C). Although the hearts of most of these morphants have altered morphology, their chambers are normally sized (figure 2D). Embryos injected with heg_e4i4_egfr2 exhibit variable heart defects. Some appear normal, while others have large inflow tracts and moderately enlarged atria (figure 2E and F). The heg mutant, as previously reported1, has a hugely enlarged inflow tract and atrium (figure 2G and H).

We also injected wildtype embryos with 400 ng/μL mRNA transcribed from full-length heg cDNA. While uninjected controls develop normally (figure 3A and B), embryos injected with heg mRNA exhibit a spectrum of phenotypes ranging from wildtype appearance to severe cyclopia, shortening of the main body axis, necrosis of the head and body, and midline defects (figure 3C and D). 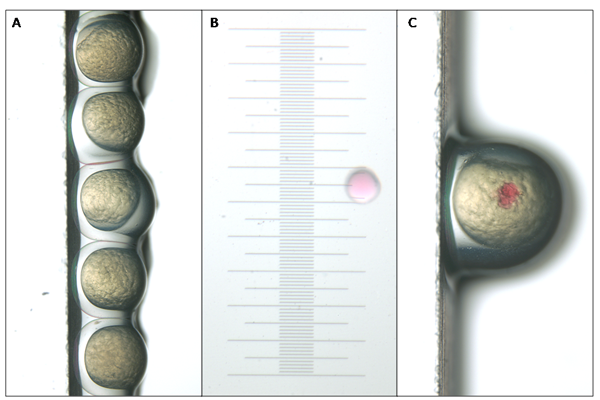 Figure 1.  Embryos to be injected are lined up against a microscope slide in a Petri dish (A).  Injection volume is determined by injecting into mineral oil placed on a micrometer.  An injection volume of 500 pL, which is commonly used, has a diameter of 0.1 mm (B).  Immediately after injection, the morpholino or mRNA is visible as a punctuate spot in the yolk (C). 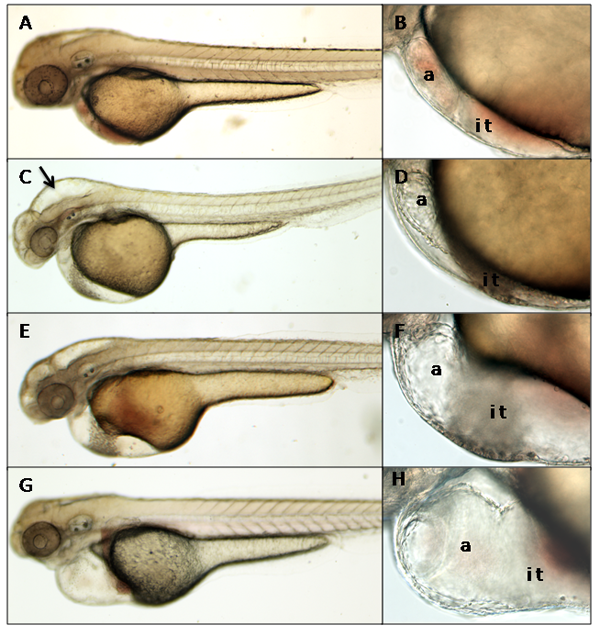 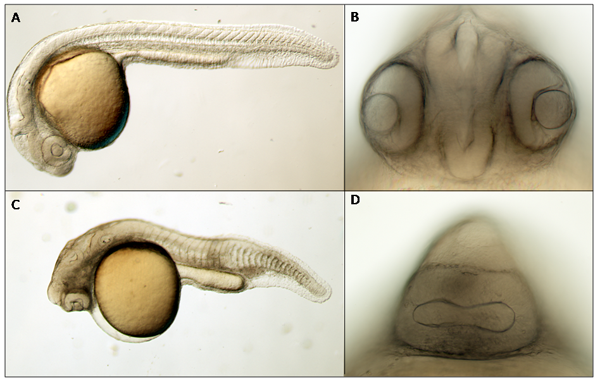 Figure 3. At 24 hours post fertilization, uninjected embryos have a long, straight body with no necrosis or midline defects (A) and two clearly defined eyes with a neural tube between them (B).  Some embryos injected with heg mRNA, in contrast, exhibit a shortened body axis, necrosis, misshaped somites (C), and cyclopia (D).  (A) and (C) are 4x DIC images; (B) and (D) are 20x DIC images.

One of the strengths of the zebrafish model system is the ease with which specific gene products can be added to or eliminated from the embryo by microinjection. To ubiquitously overexpress a particular protein, the mRNA encoding it is injected into the yolk at the 1-cell stage. During the embryo’s subsequent development, the RNA is distributed throughout the organism and translated. Conversely, to eliminate a particular protein, morpholinos are used. Morpholinos are synthetic oligonucleotides designed with antisense complementarity to specific RNAs. Like mRNAs, morpholinos are injected into the yolk at the 1-cell stage. Inside the embryo they bind their target RNAs, preventing translation.

Morpholinos have many applications, including the functional dissection of domains within a protein. When designed to target specific exon-intron junctions, morpholinos will prevent splicing from occurring there. We examined the effects of two morpholinos that bind exon-intron junctions in the pre-mRNA of heg. The morpholino heg_e3i3_egfr1 binds the junction between exon 3 and intron 3, preventing the splicing machinery from incorporating exon 3 into mature transcripts. The morpholino heg_e4i4_egfr2 similarly removes exon 4. Both exons 3 and 4 encode domains containing EGF-like repeats. Some embryos injected with heg_e4i4_egfr2 moderately phenocopy the mutant; further experiments will be required to understand the role of Heg exon 4 in heart development. Surprisingly, embryos injected with heg_e3i3_egfr1 have brain edema, a feature not seen in heg mutants. This may be due to the ability of morpholinos to bind maternal transcripts that would be unaffected in zygotic mutants.

We acknowledge members of the Mably lab and Narie Storer for their technical assistance, and the American Heart Association (NCRP Scientist Development Grant 0635363N) and the National Heart, Lung, and Blood Institute (Grant SCCOR RFA HL02-027) for funding. 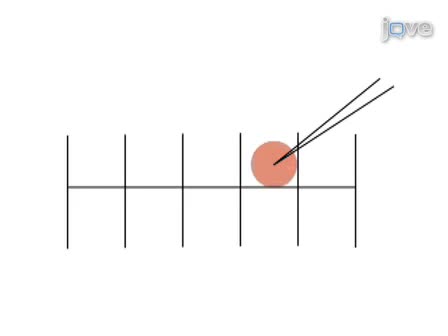