Application of electrophysiology to accessible synapses provides a quantifiable measure of synaptic activity, useful in analyzing synaptic mutants. This article describes a dissection method used to expose the neuromuscular junctions (NMJ) of Caenorhabditis elegans (C. elegans) and briefly discusses some of the uses to which this preparation can be applied.

Neurotransmission is the process by which neurons transfer information via chemical signals to their post-synaptic targets, on a rapid time scale. This complex process requires the coordinated activity of many pre- and post-synaptic proteins to ensure appropriate synaptic connectivity, conduction of electrical signals, targeting and priming of secretory vesicles, calcium sensing, vesicle fusion, localization and function of postsynaptic receptors and finally, recycling mechanisms. As neuroscientists it is our goal to elucidate which proteins function in each of these steps and understand their mechanisms of action. Electrophysiological recordings from synapses provide a quantifiable read out of the underlying electrical events that occur during synaptic transmission. By combining this technique with the powerful array of molecular and genetic tools available to manipulate synaptic proteins in C. elegans, we can analyze the resulting functional changes in synaptic transmission.

The C. elegans NMJs formed between motor neurons and body wall muscles control locomotion, therefore, mutants with uncoordinated locomotory phenotypes (known as unc s) often perturb synaptic transmission at these synapses 1. Since unc mutants are maintained on a rich supply of a bacterial food source, they remain viable as long as they retain some pharyngeal pumping ability to ingest food. This, together with the fact that C. elegans exist as hermaphrodites, allows them to pass on mutant progeny without the need for elaborate mating behaviors. These attributes, coupled with our recent ability to record from the worms NMJs 2,3,7 make this an excellent model organism in which to address precisely how unc mutants impact neurotransmission.

The dissection method involves immobilizing adult worms using a cyanoacrylic glue in order to make an incision in the worm cuticle exposing the NMJs. Since C. elegans adults are only 1 mm in length the dissection is performed with the use of a dissecting microscope and requires excellent hand-eye coordination. NMJ recordings are made by whole-cell voltage clamping individual body wall muscle cells and neurotransmitter release can be evoked using a variety of stimulation protocols including electrical stimulation, light-activated channel-rhodopsin-mediated depolarization 4 and hyperosmotic saline, all of which will be briefly described.

A. Preparation of tools used for the dissection. 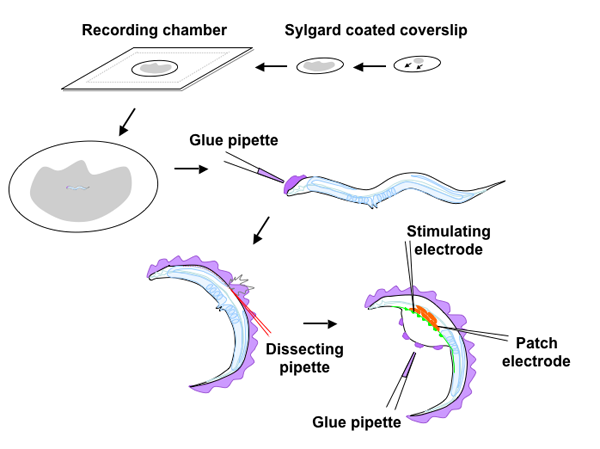 A sylgard coated coverslip made by smearing a drop of Sylgard across the glass and curing overnight is placed in the circular cavity of the prefabricated recording chamber and covered with recording solution.  A worm placed in the center is glued to the Sylgard surface starting from the head or tail, applying glue to the dorsal side of the worm, using a glue pipette,.  Once gluing is complete, an incision adjacent to the vulva, at the interface between the cuticle and glue is made with a glass needle and extended toward the head (see red perforated line).  Following extraction of viscera and eggs from the body cavity,  the cut edge of the incision is spot-welded with glue to the Sylgard exposing the ventral nerve (green) and body wall muscles (red).  The ventral-medial muscle anterior to the vulva is patch-clamped and the stimulating electrode is placed upstream on the nerve cord. 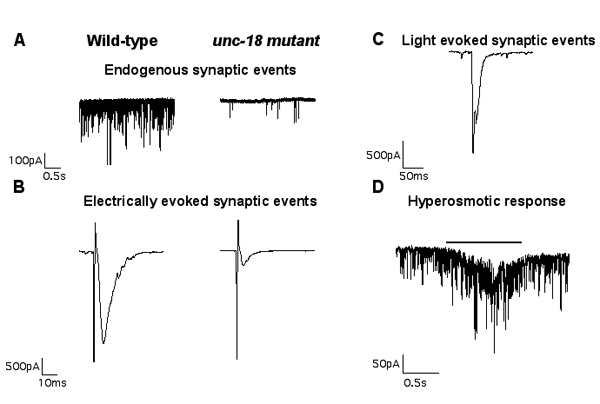 Whole-cell, voltage-clamped body wall muscle recordings are shown for each of the three stimulation protocols described above (electrically evoked, light-evoked and hyperosmotic responses).  In all cases the ventral-medial body wall muscle is clamped at -60 mV.  A. Wild-type muscle cells typically exhibit high rates of endogenous inward miniature synaptic currents in our standard recording solutions. B. A 2ms depolarization of the anterior ventral nerve cord causes synchronous release from several synapses resulting in a large evoked response of around 2-2.5 nA in wild-type worms.  Representative traces to the right of the wild-type traces in A and B show synaptic release in a severely uncoordinated mutant (unc-18).  Panel C shows a light-evoked response from the neuromuscular junction of a wild-type worm expressing channel rhodopsin in cholinergic neurons.  A 2ms light pulse typically produces a response of 1.5-1.8 nA.  D. Pressure-ejection of 850 mOsm hyperosmotic saline onto the muscle for 1s, produces an asynchronous barrage of miniature synaptic currents representing the readily-releasable pool of vesicles.

The genetic model organism C, elegans is ideally suited for the study of synaptic transmission, through the functional analysis of mutations in genes encoding synaptic proteins. Here we have described a dissection technique that renders the C. elegans NMJs accessible for electrophysiological analysis. The accompanying video depicts the critical steps in the C. elegans dissection and the typical recording configuration used to measure synaptic activity. The three steps that pose the greatest challenges in learning this technique are; 1) the worm gluing step, 2) performing a successful incision, and 3) patching on to the body wall muscles. Once these have been mastered, this preparation is amenable to the recording of the post-synaptic muscle in either the voltage-clamp or current-clamp modes. Responses to evoked stimuli can be readily measured using this dissected preparation in a variety of mutant backgrounds. Given the already minute size of the wild-type adult worm (1 mm in length), synaptic mutants that do not reach adulthood or remain scrawny may not be amenable to this dissection approach. The motor neurons of the ventral nerve cord are also very small (cell soma’s 2-5 μm) and pose additional challenges for electrophysiologists, although several labs have successfully recorded from C. elegans neurons in variations of the dissected preparation described here 5 6.

This article was funded by NIH grants to JER. I would like to thank Dr. Alex Gottschalk for providing the transgenic worms expressing channel rhodopsin in cholinergic motor neurons used in one of the recording demonstrations. 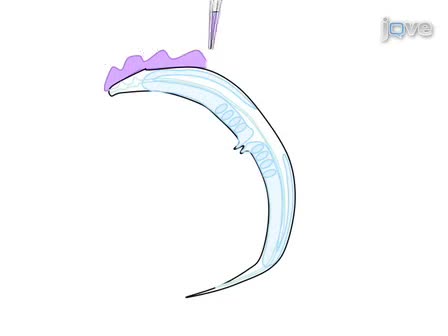