The chick chorioallantoic membrane (CAM) is a unique, naturally immunodeficient supportive culture environment to study angiogenesis and tumorigenesis. This video article demonstrates the different steps in chick ex ovo culture, application of potentially angiogenic substances and successful inoculation of tumor cells and tissues on the surface of the CAM.

Chicken eggs in the early phase of breeding are between in vitro and in vivo systems and provide a vascular test environment not only to study angiogenesis but also to study tumorigenesis. After the chick chorioallantoic membrane (CAM) has developed, its blood vessel network can be easily accessed, manipulated and observed and therefore provides an optimal setting for angiogenesis assays. Since the lymphoid system is not fully developed until late stages of incubation, the chick embryo serves as a naturally immunodeficient host capable of sustaining grafted tissues and cells without species-specific restrictions. In addition to nurturing developing allo- and xenografts, the CAM blood vessel network provides a uniquely supportive environment for tumor cell intravasation, dissemination, and vascular arrest and a repository where arrested cells extravasate to form micro metastatic foci.

For experimental purposes, in most of the recent studies the CAM was exposed by cutting a window through the egg shell and experiments were carried out in ovo, resulting in significant limitations in the accessibility of the CAM and possibilities for observation and photo documentation of effects. When shell-less cultures of the chick embryo were used1-4, no experimental details were provided and, if published at all, the survival rates of these cultures were low. We refined the method of ex ovo culture of chick embryos significantly by introducing a rationally controlled extrusion of the egg content. These ex ovo cultures enhance the accessibility of the CAM and chick embryo, enabling easy in vivo documentation of effects and facilitating experimental manipulation of the embryo. This allows the successful application to a large number of scientific questions: (1) As an improved angiogenesis assay5,6, (2) an experimental set up for facilitated injections in the vitreous of the chick embryo eye7-9, (3) as a test environment for dissemination and intravasation of dispersed tumor cells from established cell lines inoculated on the CAM10-12, (4) as an improved sustaining system for successful transplantation and culture of limb buds of chicken and mice13 as well as (5) for grafting, propagation, and re-grafting of solid primary tumor tissue obtained from biopsies on the surface of the CAM14.

All equipment and reagents have to be purchased sterile or needs to be heat or steam sterilized or sterilized with 70% ETOH.

The authors state that experiments on animals were performed in accordance with the European Communities Council Directive (86/609/EEC), following the Guidelines of the NIH regarding the care and use of animals for experimental procedures and the regulations set forth by the Institutional Animal Care and Use Committee (IACUC) at the University of Duisburg-Essen (Germany).

Part 4: Inoculation of cells onto the CAM

4.2 Inoculation of cells onto the CAM 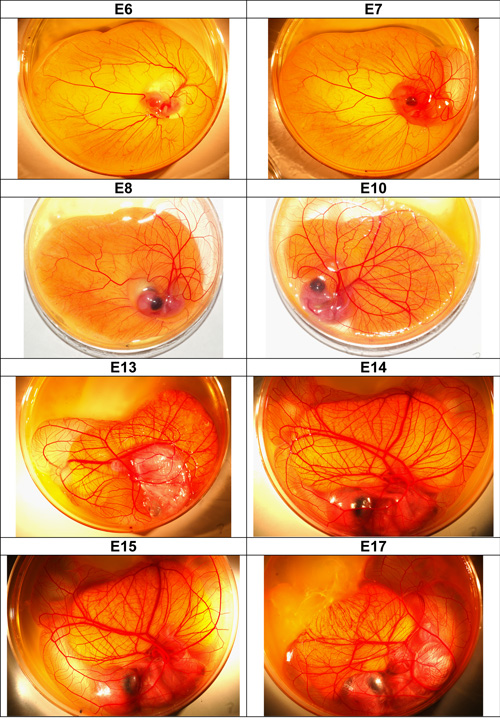 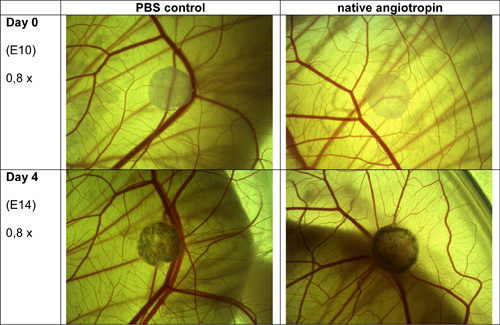 Figure 2. Ex ovo CAM angiogenesis assay
Fertilized chicken eggs were incubated horizontally at 37 °C and humidity of 60 - 62% and cracked into Petri dishes at embryonic day 4 (E4). Incubation was continued under the same conditions. At E10 sterile filter papers (5.5 mm in diameter) were layered on top of the CAM and soaked either with 5 μl PBS or 3 μg native angiotropin6. Capillaries showed obvious alignment towards the angiotropin soaked filter paper at E14. 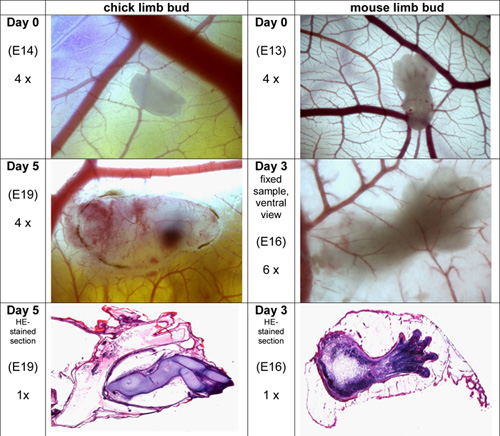 Figure 3. Ex ovo grafting of limb buds
Limb buds from chick (E3/E4) and mouse (E13) were grafted onto the CAM of shell-less chicken cultures. Blood vessels from the CAM entered the limb buds after two days. The development of the limb buds continued in these ex ovo cultures reaching a two phalange stage in chick and displaying reduction of the interdigital webs in murine limb buds. 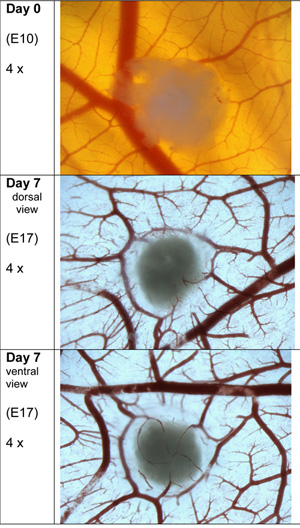 Figure 4. Ex ovo inoculation of tumor sample
A biopsy sample of bladder carcinoma was inoculated onto the CAM of a 10-day-old chick embryo cultured ex ovo. After two days in culture, the tumor specimen was connected to the CAM vasculature and after 7 days, multiple blood vessels entering the graft were observed.

With former shell-less culture protocols1-4 the total survival rates of the chick embryos were low, e.g. ca. 30%1. The refined ex ovo culture protocol described in this video article, by contrast, allows for survival rates over 50%. Compared to classical in ovo cultures ex ovo culture of chick embryos significantly facilitates the accessibility of the CAM and chick embryo and enables their experimental manipulation and continuous monitoring. This culture method can be used for a wide variety of application ranging from enhanced angiogenesis assays5,6, to facilitated injections in the vitreous of the chick embryo eye7-9, intravasation assays10-12, improved grafting and growth of limb buds13 and innovative maintenance of tumor samples14. Thus, ex ovo culture contributes a useful tool in developmental, angionesis and tumor research.

The authors would like to thank J. Kueper and J. Wittschier for excellent technical assistance and Prof. Ruebben for generously supplying tumor material. 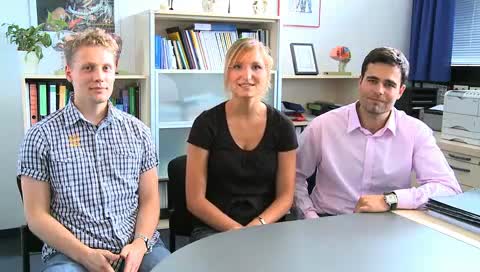