A noninvasive procedure to assess endothelial function is demonstrated using the Endo-PAT 2000.

The endothelium is a delicate monolayer of cells that lines all blood vessels, and which comprises the systemic and lymphatic capillaries. By virtue of the panoply of paracrine factors that it secretes, the endothelium regulates the contractile and proliferative state of the underlying vascular smooth muscle, as well as the interaction of the vessel wall with circulating blood elements. Because of its central role in mediating vessel tone and growth, its position as gateway to circulating immune cells, and its local regulation of hemostasis and coagulation, the the properly functioning endothelium is the key to cardiovascular health. Conversely, the earliest disorder in most vascular diseases is endothelial dysfunction.

In the arterial circulation, the healthy endothelium generally exerts a vasodilator influence on the vascular smooth muscle. There are a number of methods to assess endothelial vasodilator function. The Endo-PAT 2000 is a new device that is used to assess endothelial vasodilator function in a rapid and non-invasive fashion. Unlike the commonly used technique of duplex ultra-sonography to assess flow-mediated vasodilation, it is totally non-operator-dependent, and the equipment is an order of magnitude less expensive. The device records endothelium-mediated changes in the digital pulse waveform known as the PAT ( peripheral Arterial Tone) signal, measured with a pair of novel modified plethysmographic probes situated on the finger index of each hand. Endothelium-mediated changes in the PAT signal are elicited by creating a downstream hyperemic response. Hyperemia is induced by occluding blood flow through the brachial artery for 5 minutes using an inflatable cuff on one hand. The response to reactive hyperemia is calculated automatically by the system. A PAT ratio is created using the post and pre occlusion values. These values are normalized to measurements from the contra-lateral arm, which serves as control for non-endothelial dependent systemic effects. Most notably, this normalization controls for fluctuations in sympathetic nerve outflow that may induce changes in peripheral arterial tone that are superimposed on the hyperemic response.

In this video we demonstrate how to use the Endo-PAT 2000 to perform a clinically relevant assessment of endothelial vasodilator function.

Figure 1: Normal Endothelial Vasodilator Function. Representative recording of an individual with normal endothelial vasodilator function, characterized by an increase in the signal amplitude after cuff release relative to baseline. 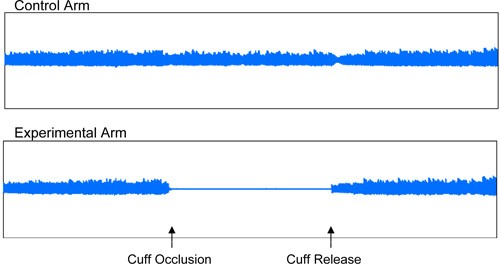 The vasodilators released by the endothelium include vasodilator prostanoids such as prostacyclin, peptides such as adrenomedullin and atrial natriuretic peptide, and small molecules such as endothelium dependent hyperpolarizing factor, carbon monoxide and nitric oxide 17. In addition, the effect of hyperpolarizing currents generated in the endothelium can be transmitted to underlying vascular smooth muscle of smaller vessels, relaxing them 18. An indirect assessment of the generation of these endothelial vasodilator influences can be gained by studying vascular reactivity. The most prevalent method to assess endothelial regulation of vascular reactivity non-invasively has been duplex ultrasonography to detect flow-mediated vasodilation of the brachial artery 19.

The tractive force of fluid flow stimulates the endothelium to release vasodilators, most prominently nitric oxide 20. This phenomenon can be observed by ultrasound in the brachial artery during increases in forearm blood flow induced by reactive hyperemia 19. This technology has been widely utilized to document the association of endothelial vasodilator dysfunction with cardiovascular risk factors; the relationship of endothelial vasodilator dysfunction to various biomarkers, such as C-reactive peptide, or asymmetric dimethylarginine (the endogenous antagonist of nitric oxide synthase); and the correction of endothelial vasodilator function with nutritional and lifestyle modifications as well as with the use of angiotensin converting enzyme inhibitors, angiotensin receptor blockers, statins, insulin sensitizing agents or aspirin 21-23.

In conclusion, we have demonstrated how to perform a reliable and reproducible test for endothelial vasodilator function with the Endo-PAT 2000. The test is noninvasive, easy to perform, and is a useful research tool. Its utility in clinical monitoring of endothelial function and in tailoring disease management is under investigation.

The video development was supported by Itamar Medical Co. Dr Cooke is the inventor of patents owned by Stanford University for diagnostic and therapeutic applications of the NOS pathway from which he receives royalties.

The authors would like to thank Koby Sheffy, PhD for his insightful review of this work and William Sotka for ongoing support and technical assistance. 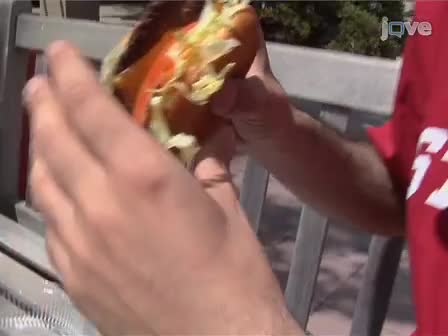